It’s starting to get just a little bit chillier outside, which means that we’re already thinking about the holidays. 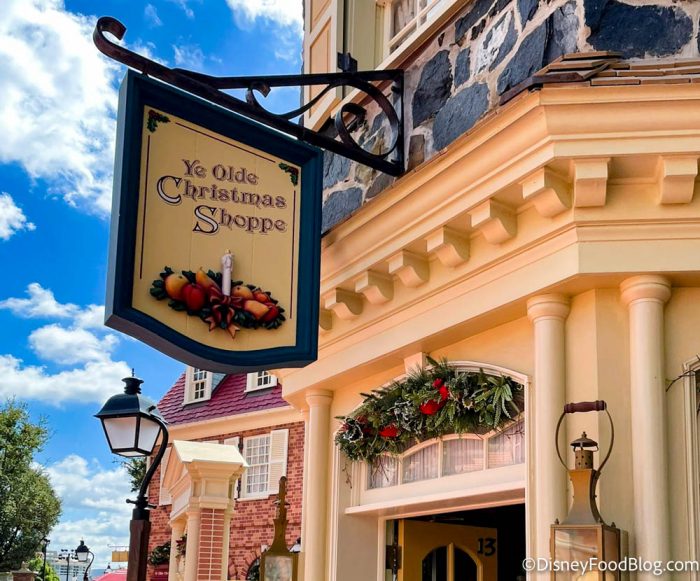 Don’t get mad at us — we know that Halloween hasn’t even arrived yet. But who doesn’t want to get a jump start on all the holiday shopping that we know is right around the corner? To help us out, Disney just released a bunch of NEW festive items online! Check out some of our favorites, which are available to buy now.

First of all, we HAD to point out this amazing festive bucket hat, which says “Season’s Greetings” on the front — and the letters are made out of holiday treats! 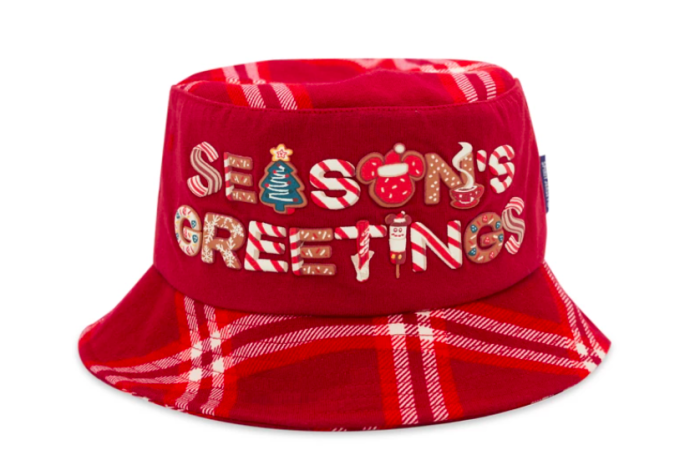 Not sure who at Disney decided bucket hats are cool again, but we’re here for it! The top and brim have a plaid pattern. You can get the hat for $34.99 on shopDisney.

We’ve all heard of the holiday tradition of getting new pajamas for Christmas Eve, and now your pup can join in on the fun! There’s a Pluto-themed plaid holiday shirt, made just for dogs! 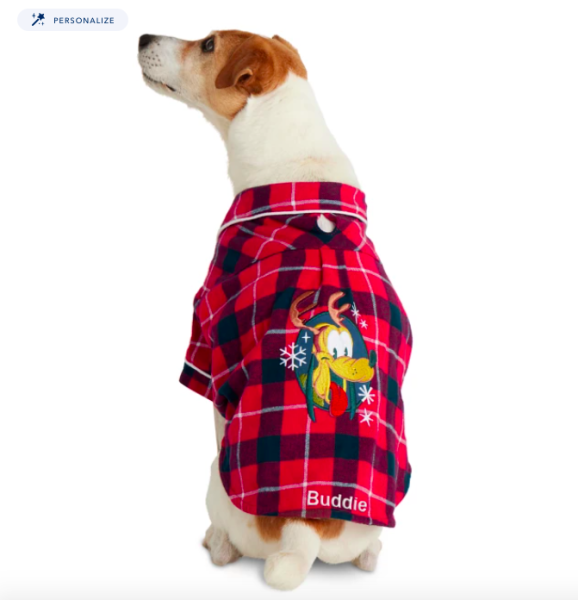 And you can find matching pajamas on shopDisney as well so that everyone’s coordinated for the festive season. 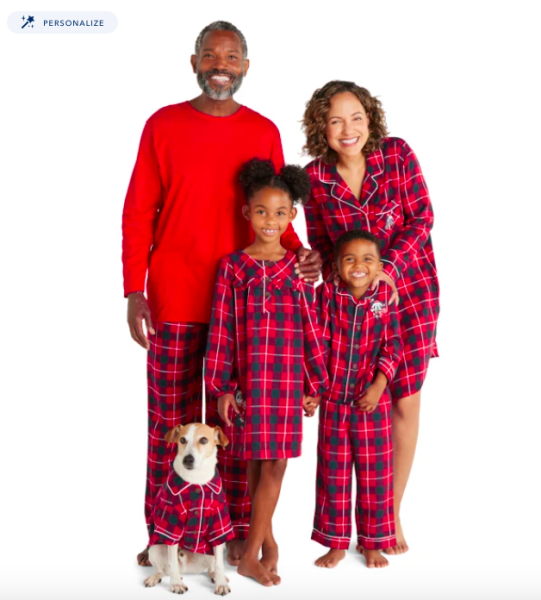 Fido’s shirt will cost $26.99, and it’s available in sizes S to XL. If your dog is really spoiled, you can even personalize it and have their name embroidered on the shirt!

Click Here to Buy the Pluto Flannel Shirt for Dogs

Since we’re still in the spooky season right now, we had to include this set of Nightmare Before Christmas ornaments and a tree topper! Jack dressed as Sandy Claws can sit atop the tree, and other characters from the movie can hang around beneath him. 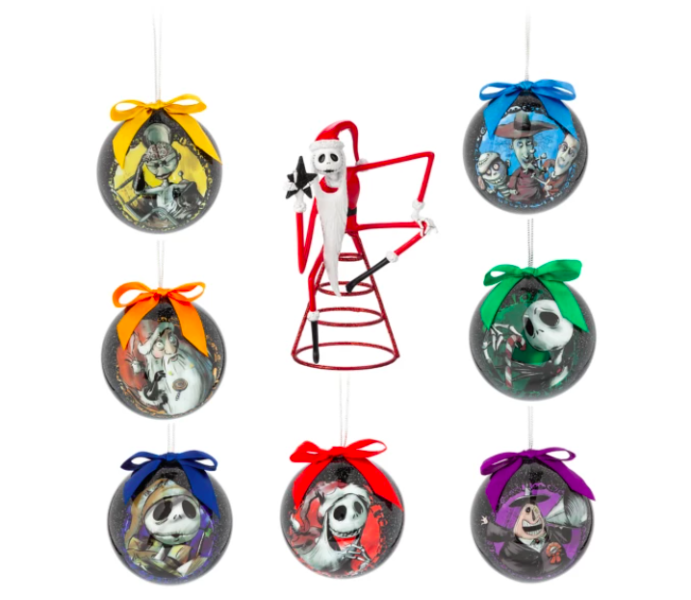 The ornaments all have Jack on one side and another character on the other. Characters include Oogie Boogie; Dr. Finkelstein; Santa Claus; Sally; Lock, Shock, & Barrel; The Mayor, and Tim Burton’s The Nightmare Before Christmas logo. You can get the set for $49.99.

There are also plenty of other ornaments available now, including a bunch of new Sketchbook ornaments featuring Disney princesses. One of our favorites is this awesome Mulan ornament, featuring the warrior herself and her trusty dragon Mushu. 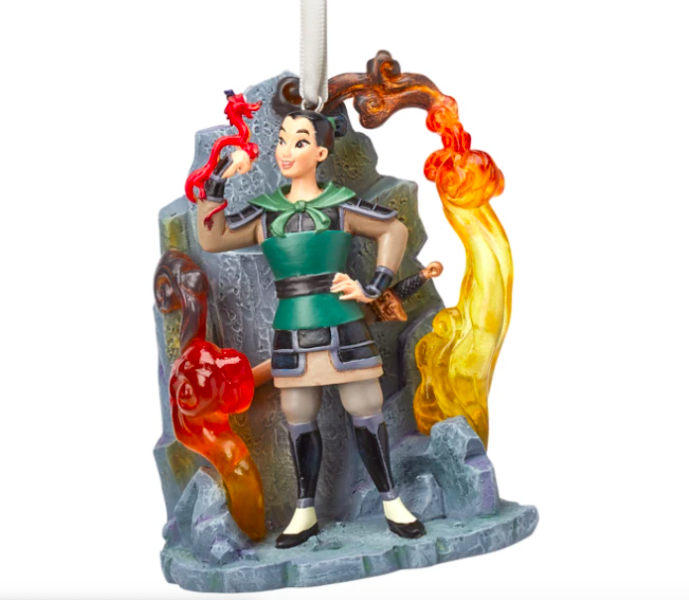 You can add it to your Disney ornaments collection for $24.99.

We love the other ornaments on this list, but our favorite has to be this Mickey Mouse and Friends Sketchbook Ornament, which has Mickey, Minnie, Pluto, and Goofy in a hot air balloon that’s shaped like Mickey’s gloves! 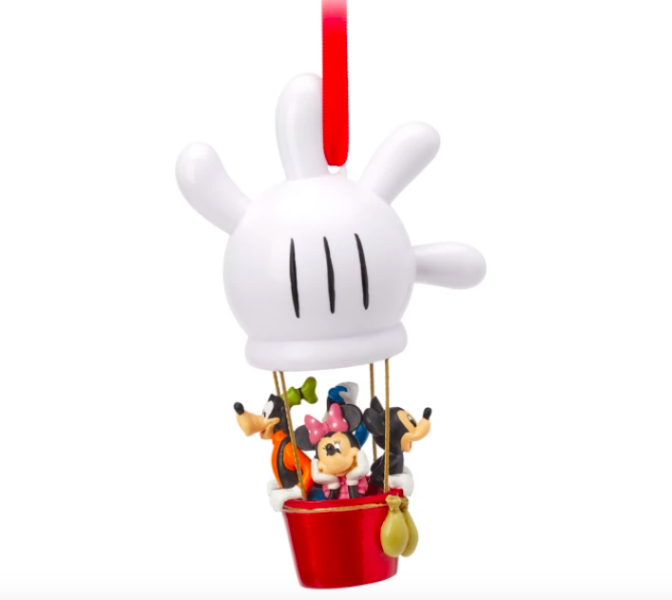 This adorable little ornament is $19.99. Maybe we love it because the hot air balloon reminds us of the Festival of Fantasy parade that used to run through the Magic Kingdom. 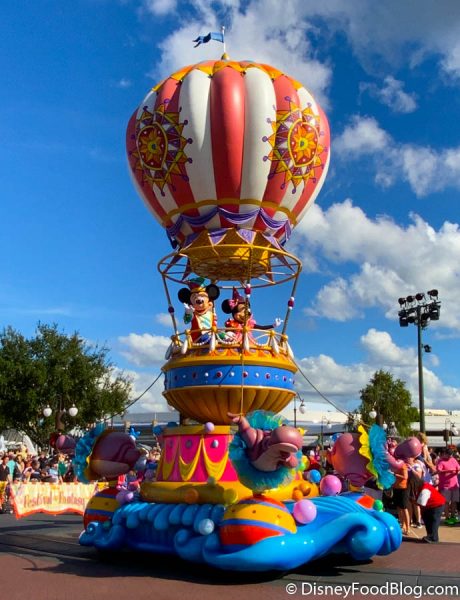 We do miss those Disney World parades…but in the meantime, have you checked out the new 50th Anniversary cavalcade in Disney World?

Click Here to Buy the Mickey Mouse and Friends Ornament

The next new holiday item is more Disney ornaments, but these are a little different — they clip onto the tree instead of hanging! Tinker Bell sits atop the clip, so it’ll look like she’s sitting right on the tree branch. 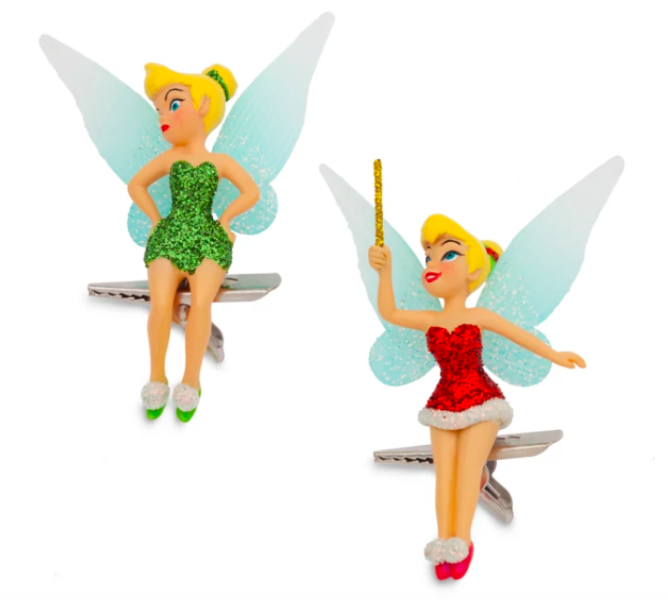 There’s a “Naughty” and “Nice” version of Tinker Bell, and you can get them both for $24.99 now. (And if you have small kids or pets known for knocking ornaments off your tree, you’re probably like “Where have these been all my life!”.)

To keep you nice and cozy during the holidays, we found this Mickey and Minnie Mouse Holiday Fleece Throw. One side has a festive pattern with snowflakes and Christmas trees… 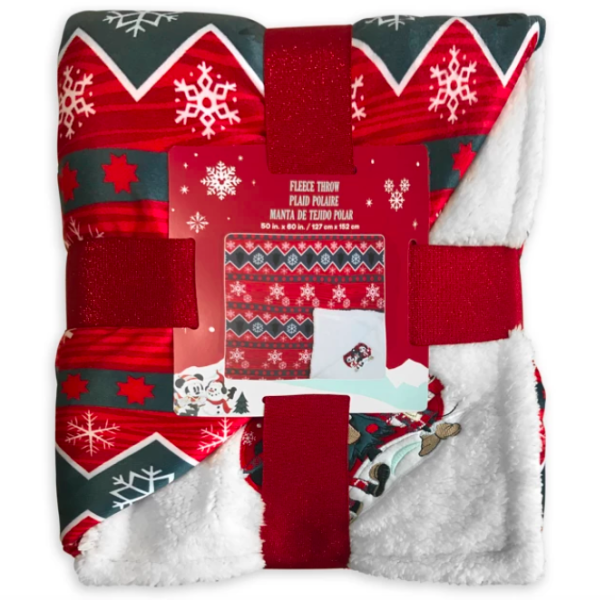 …and the other is fuzzy white fleece fabric with an embroidered picture of Mickey and Minnie Mouse. 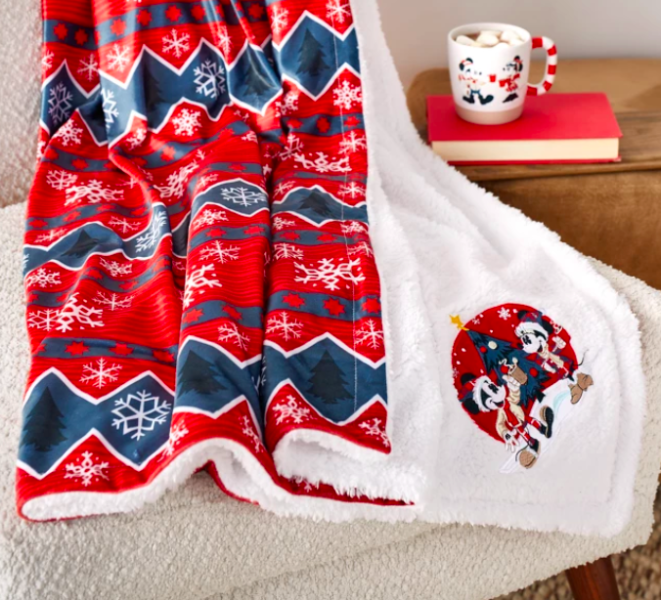 Aaaaand we’re back to the ornaments. What can we say? We love a good Disney ornament. This one features WALL-E and E.V.E. from Disney Pixar’s WALL-E. 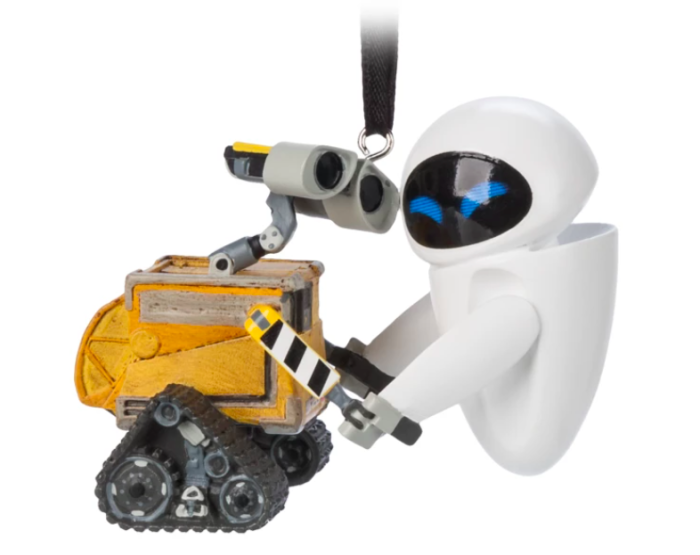 You can hang this adorable robot pair from your tree for $24.99. The ornament will also stand up on its own if you’d rather display it on a table or mantle.

Click Here to Buy the WALL-E and E.V.E. Ornament

We’ve already taken a look at a bunch of Disney-themed Christmas Sweaters, but we had to include one here. Did Christmas even happen if you don’t wear a ridiculous sweater? Luckily we found this Mickey and Friends Holiday Sweater, which features a bunch of Disney characters and holiday designs. 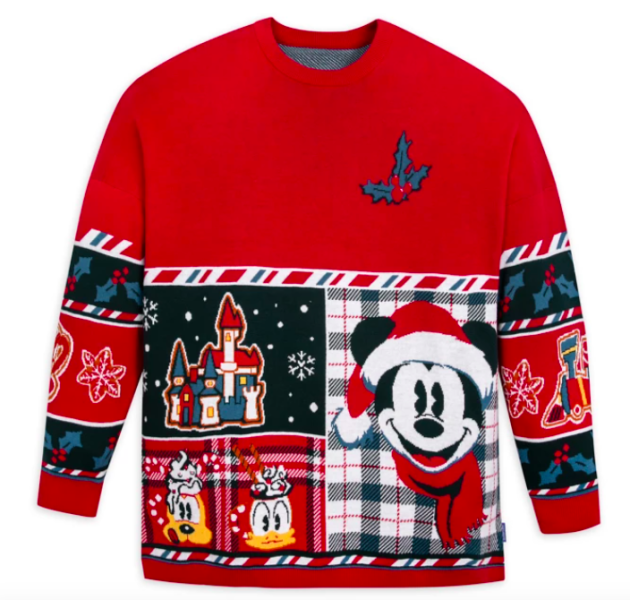 On it, you’ll find Mickey Mouse, Pluto, Donald, Goofy, and Chip & Dale (most in Christmas mug form!). It’s a knit sweater, but with the look and cut of the spirit jerseys that you’ll see all over Disney World. 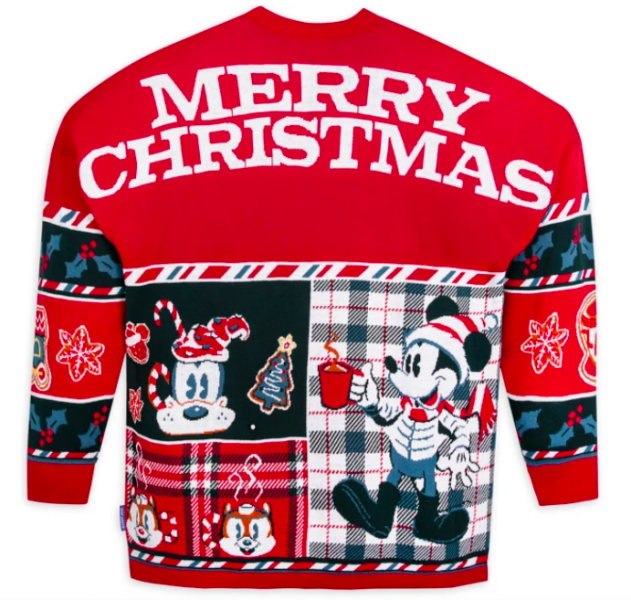 Get ready for the cozy season with this sweater, which you can buy for $89.99.

Click Here to Buy the Mickey and Friends Holiday Sweater

And speaking of those spirit jerseys, there’s a Mickey Mouse Holiday Plaid Spirit Jersey (in case you didn’t want the sweater version). 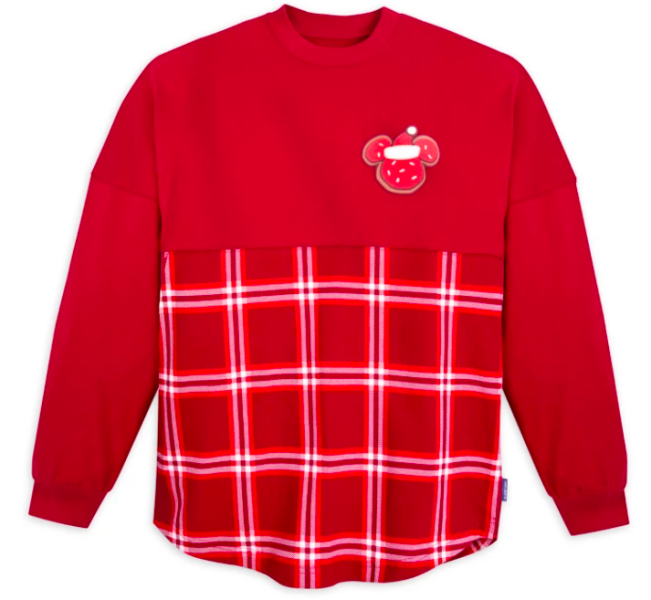 The jersey has plaid fabric on the bottom and back of the sleeves, a Mickey-shaped cookie on the front, and “Season’s Greetings” written in holiday treats across the back. 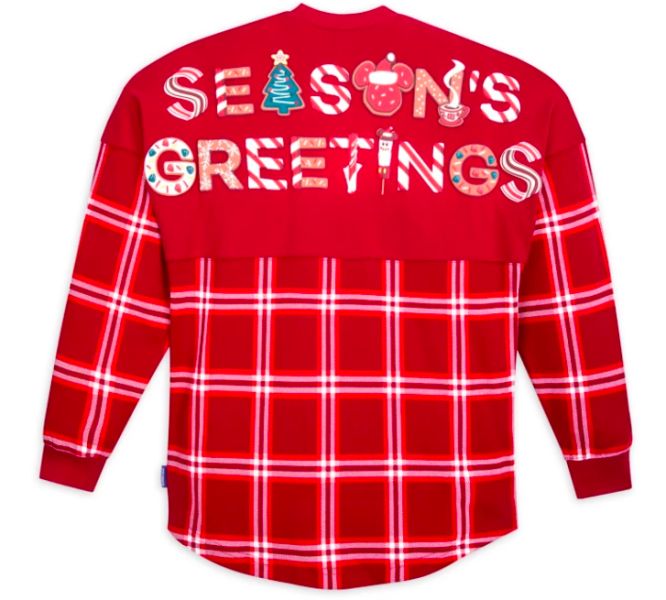 That should be enough to get you started on your holiday shopping, right? Keep following DFB, and we’ll let you know about more holiday happenings in Disney World!

What’s your favorite new holiday item on shopDisney? Let us know in the comments!

« Guess What, Disney nuiMO Collectors?! A New Princess is Here (And She REAL Cute!)
One Opening Day Disney World Attraction Will Be Closing for A Month »