We’ve been keeping track of quite a few construction projects around Disney World and we’re starting to get more details about when they might open! 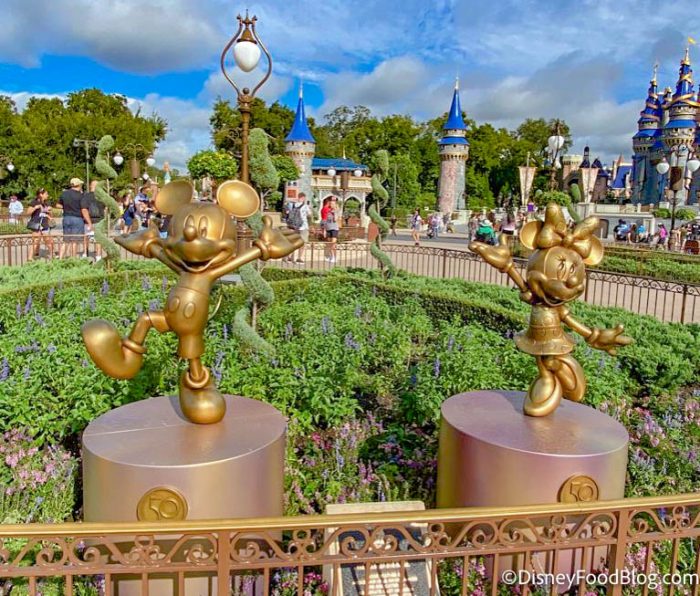 So far, we know that both Guardians of the Galaxy: Cosmic Rewind and the new Toy Story-themed restaurant (Roundup Rodeo BBQ) will open in 2022, but there might be even more to come! And, aside from all the NEW things coming this year, there are also some other rides, restaurants, and resorts getting some TLC. So, today we’re bringing you along with us to check out all of the latest progress — let’s take a look!

The popular water ride, Splash Mountain, closed in Magic Kingdom at the beginning of January for a month-long refurbishment. And, now we’re starting to get an idea of what “routine maintenance” is taking place. For example, this week we noticed that construction crews were working at the top of the mountain where new scaffolding had been placed… 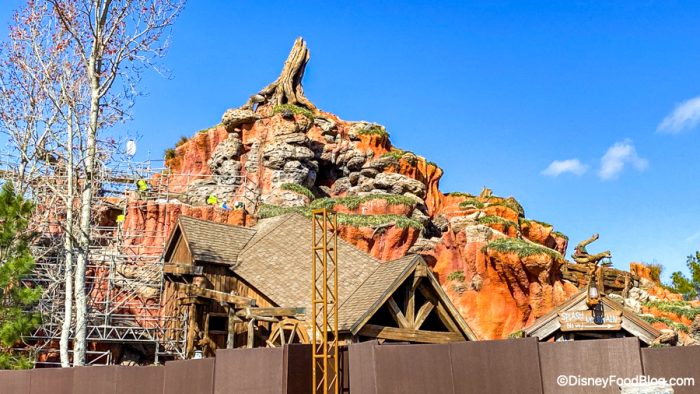 …and they were also down in the moat seemingly working on the mechanics of the ride. 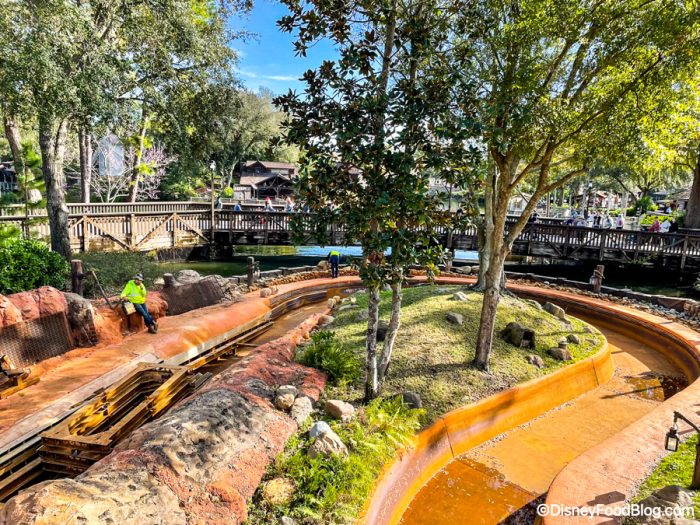 This refurbishment is not related to the upcoming reimagination of the ride to be themed after Princess and the Frog so it won’t be too much longer before Splash Mountain reopens on February 10th, 2022.

Learn More About the Temporary Closure of Splash Mountain HERE!

If it feels like we’ve been talking about TRON: Lightcycle Run for years, then you’d be right. This roller coaster was originally announced for Magic Kingdom back in 2019, but construction was delayed due to the COVID-19 global pandemic. We’ve been seeing quite a bit of progress on the exterior portion of the ride recently, and when we stopped by recently, we could see crews up in lifts working on the canopy. 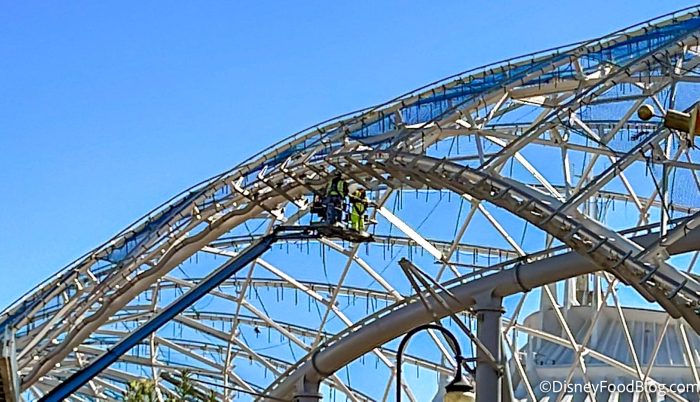 The canopy itself covers the actual track for the ride and it looks like these may be some of the last preparations before it can be fully installed. 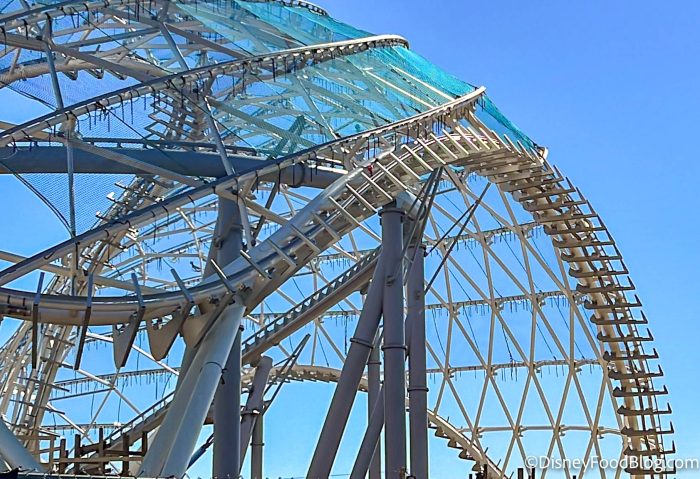 It’s still unclear when this attraction will open, however, so be sure to stay tuned to DFB for the latest updates!

Over at EPCOT, more progress has been made on another upcoming roller coaster — Guardians of the Galaxy: Cosmic Rewind. Disney has been working to transform the building that once was home to Ellen’s Energy Adventure into a hub for the Xandarians (from Marvel’s Guardians of the Galaxy) which has involved A LOT of paint. We’ve been keeping track of the painting progress for a few weeks and there’s now only one more pillar left to go. 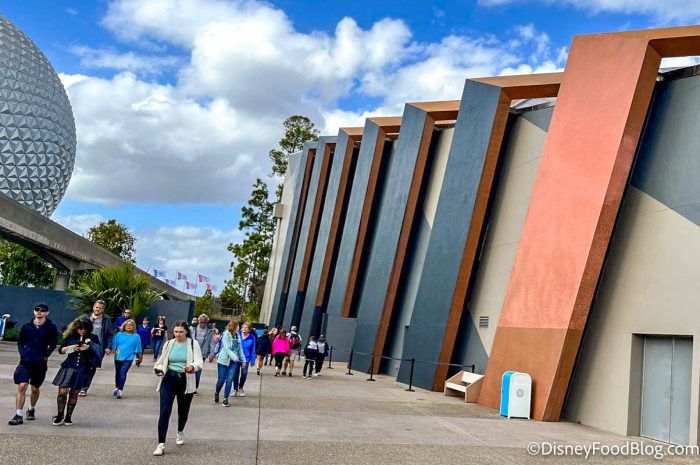 The painting is almost complete!

Plus, we also passed by on the monorail and could see that the entrance to the ride is fully paved and the blue tarp that once lined the roof is now entirely gone. 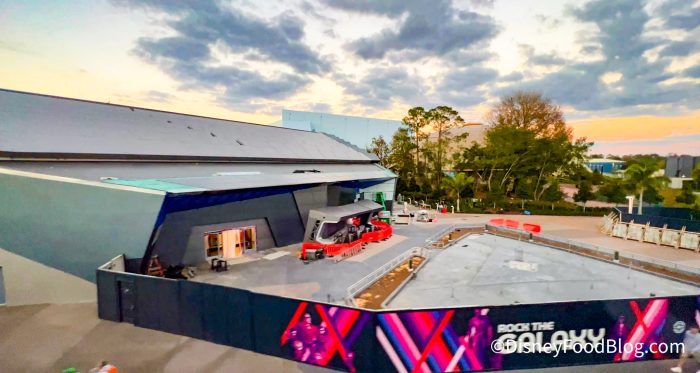 As a reminder, here’s what the entrance will look like when it’s complete… . 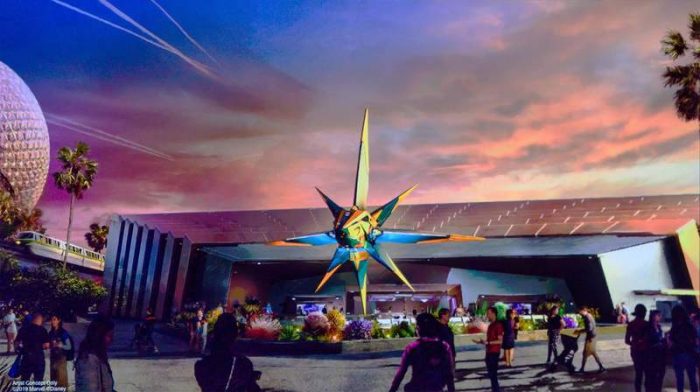 Disney has announced that the ride will open sometime in Summer 2022 so it won’t be too much longer before we get to step inside!

Click HERE to See What Our First Look INSIDE the Guardians of the Galaxy Ride in EPCOT Was Like!

If you’ve been to EPCOT recently, then you probably know that the center of the park (also known as World Celebration) still remains mostly a construction zone. We’ve been able to get a few peeks at what could be coming to the old Mouse Gear location from the monorail, but this week we explored the area by foot and noticed that new windows had been installed. 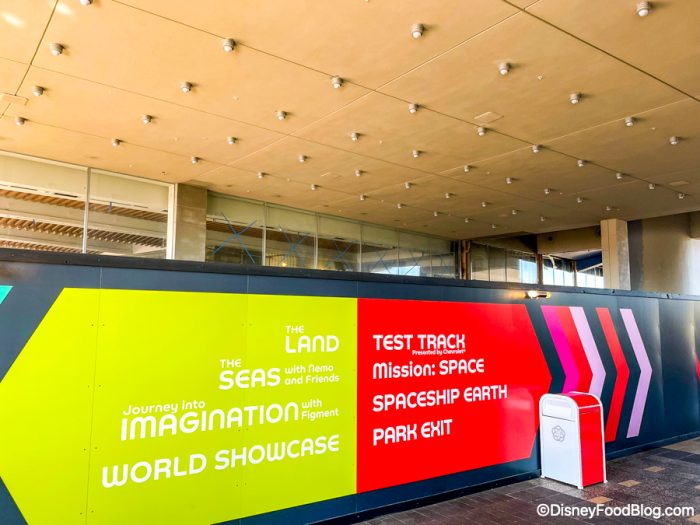 What will be located here is still a mystery, though! One thing that it could be is the new Quick Service restaurant that was recently announced for EPCOT, however, Disney has not confirmed this.

Things have gotten a bit more congested over at Woody’s Lunch Box in Disney’s Hollywood Studios! We recently spotted some construction tarp and the infamous “construction bushes” lining the edges of the seating area for the Quick Service restaurant. 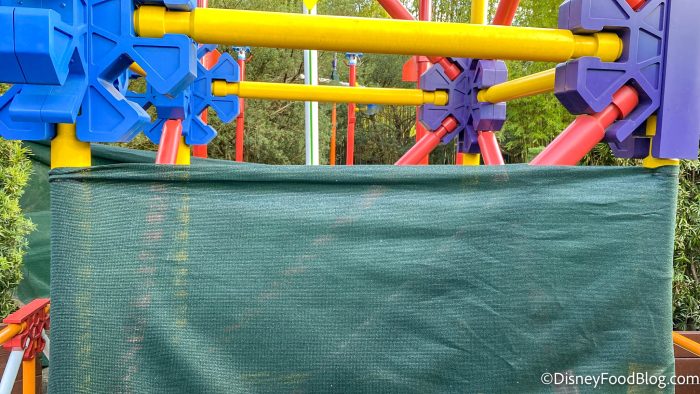 None of the tables that are in the dining area have been impacted, but your lunch view may look a little more…artificially green the next time you eat here.

Speaking of Disney’s “construction bushes,” we spotted some near the entrance to the ride Dinosaur! in Disney’s Animal Kingdom this week. 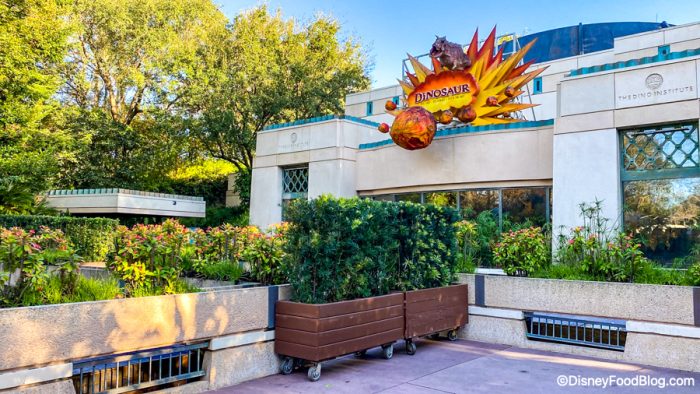 Some construction going on here

There didn’t appear to be any big changes taking place behind the barriers, but we’ll keep an eye out to see what got some sprucing up when they are removed.

We also stopped by Disney’s Caribbean Beach Resort where we checked in on some work that had previously been announced for the hotel. Right now, the bridges that connect Old Port Royale to the Aruba and Jamaica neighborhoods are closed, so you’ll find some green barriers blocking your way… 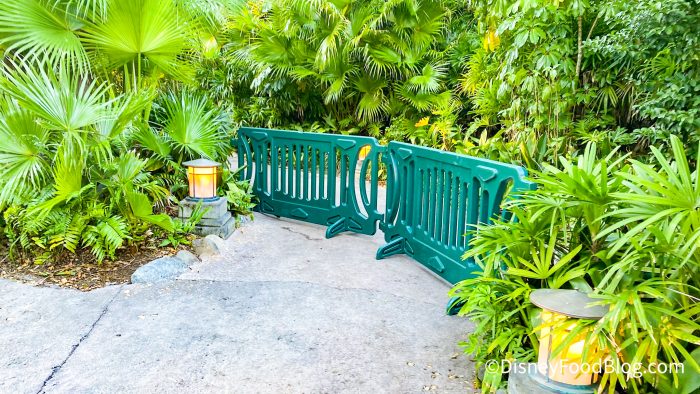 …and, you might even spot some construction tape as you make your way around. 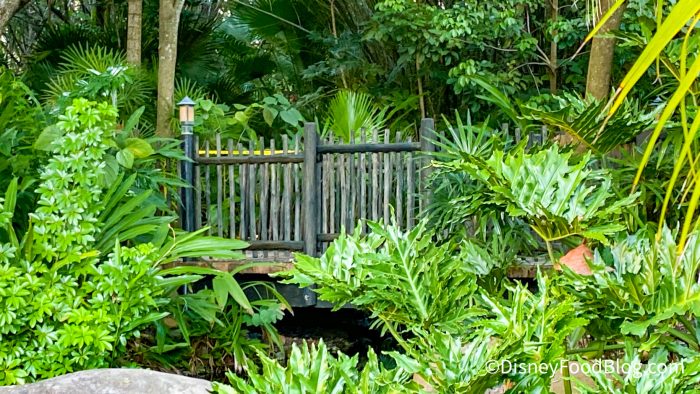 Can see some caution tape in the distance

The bridges are expected to be closed through January, so guests staying here can take the internal shuttle between Old Port Royale and the Aruba and Jamaica neighborhoods instead.

Well, that’s it for this week’s construction update! We’re always on the lookout for what has changed around Disney World, so be sure to stay tuned to DFB for the latest!

Click HERE to See Everything That Will Be CLOSED in Disney World in 2022!

Have you ever stumbled upon unexpected construction in Disney World? Let us know in the comments!