Hey, everybody! It’s time for another What’s New in Hollywood Studios! 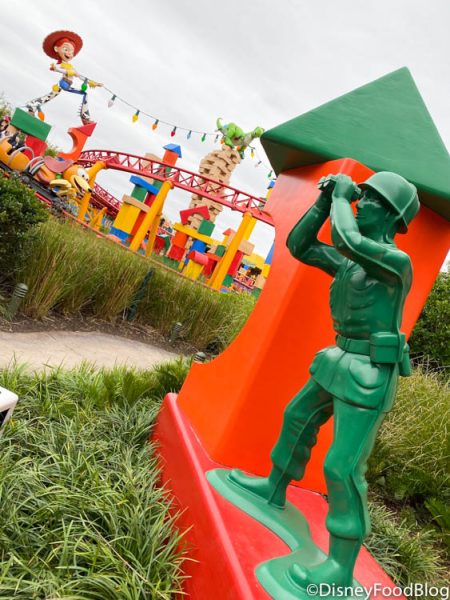 Let’s take a look at what’s been happening at the park since our last visit!

The Pretzel Cart on Hollywood Boulevard has been relocated. You’ll now find it located a little further down from its former spot near the Chinese Theater! 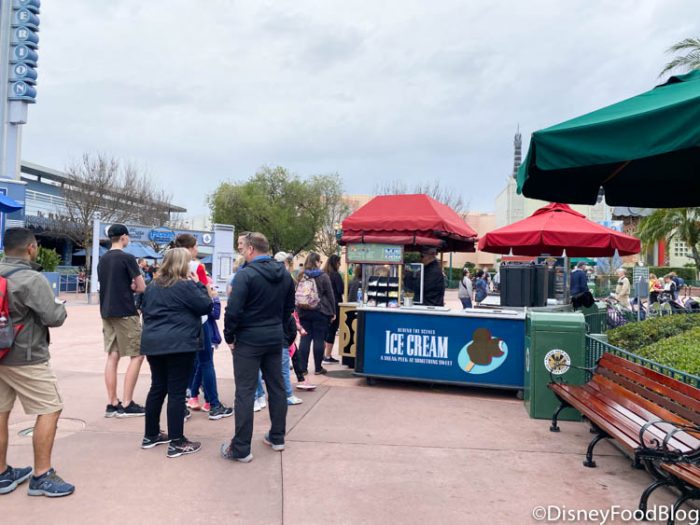 And there’s now a foliage wall up blocking the construction occurring where the cart used to be. We’ll keep on eye on this area as construction progresses! 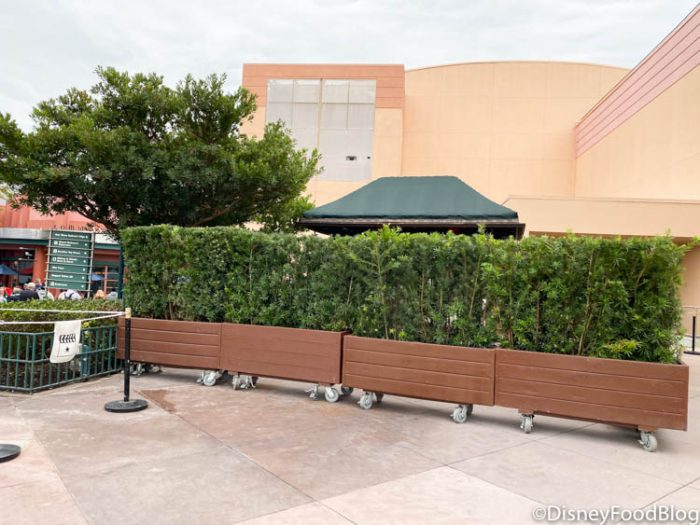 Meanwhile, the exterior of Sunset Boulevard’s Legends of Hollywood is having some facade work done. We noticed the building was partially covered with construction scrim. 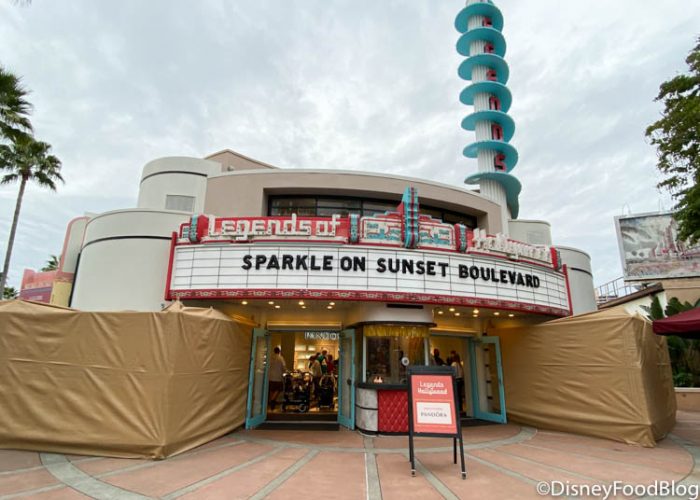 The scrim continued down the length of the building. Luckily, the old-timey movie posters are intact — at least for now! 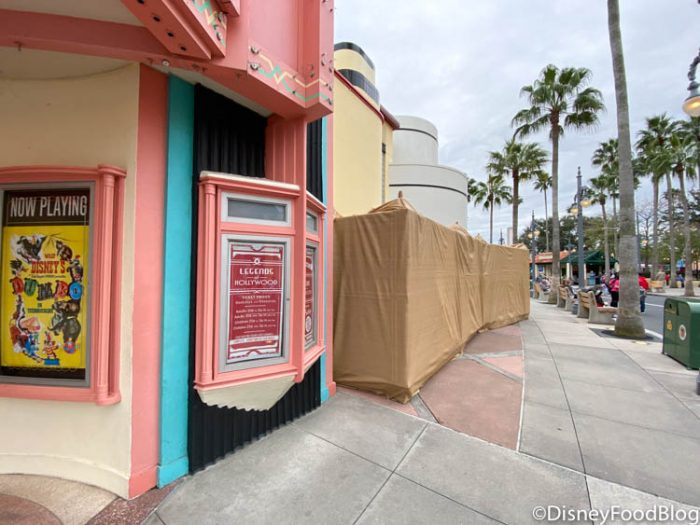 We also walked by Muppet*Vision 3D and saw the theater was still closed for refurbishment. 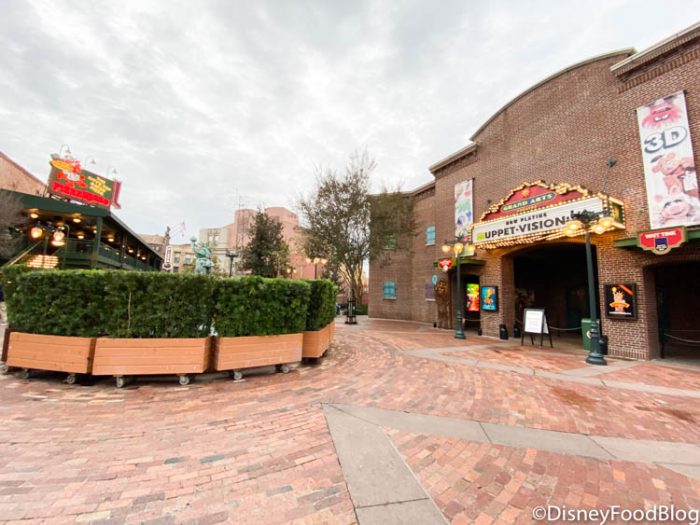 According to the Disney World website, it shouldn’t be down for long and we should see the attraction re-open February 8th, 2020. 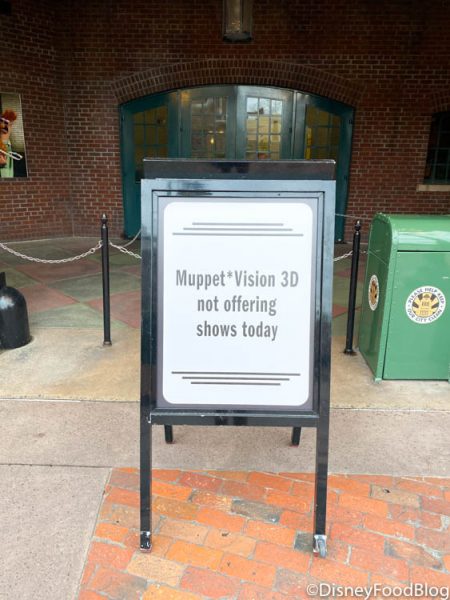 Find out which other Disney World attractions are currently closed here!

The fountain in Muppet*Vision 3D’s courtyard is also blocked off by a wall of hedges for the time being, but you can still see Miss Piggy peeking out from behind them! It looks like she’s still holding a torch for Kermit the Frog! 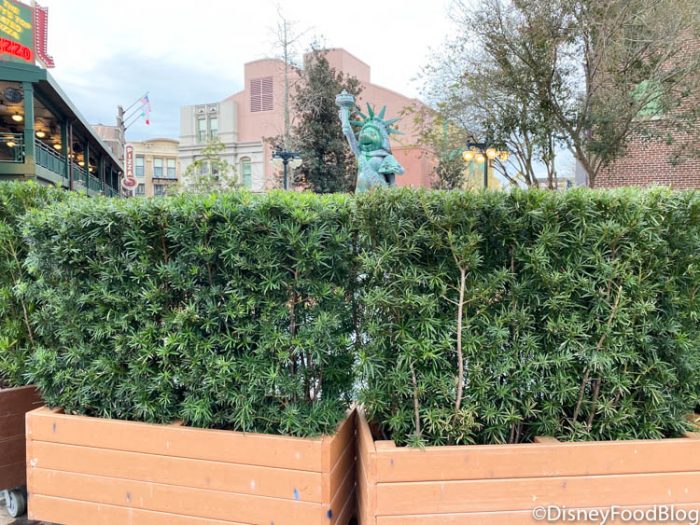 Next, we trekked back to Toy Story Land to see how Roundup Rodeo Barbecue, a new bbq restaurant that will be opening sometime in 2020, is progressing. They’ve since relocated Buzz Lightyear’s meeting spot which previously formed along the construction wall. 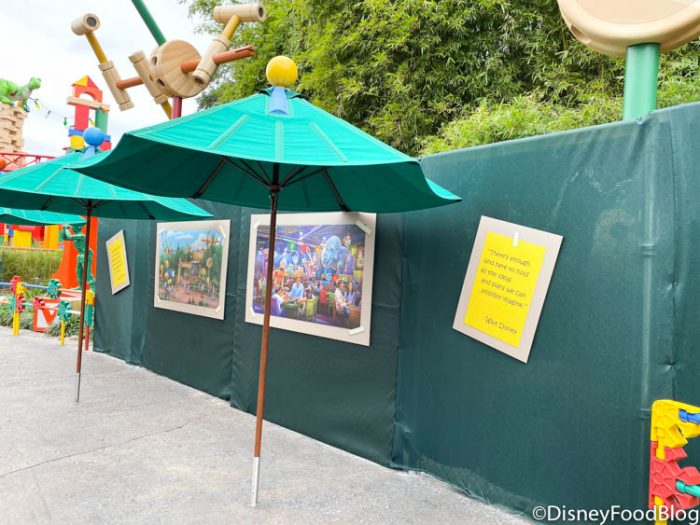 Where not sure if this will be his new spot or was just a temporary relocation, but we saw him on the other side of the walkway down by the Toy Story Land sign. 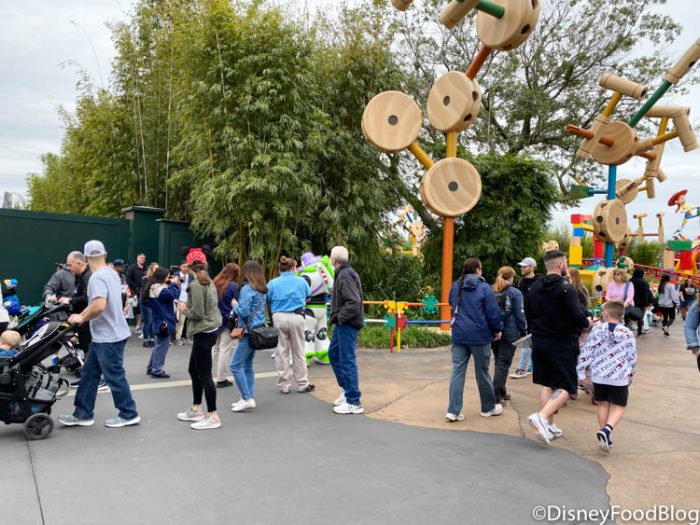 And check this out! Towering high above the construction site for the future home of Roundup Rodeo Barbecue, we saw THE CLAW!!!! Oooooooo! (Actually, it’s just a heavy-duty crane, but still, we’re easily impressed!) 😉 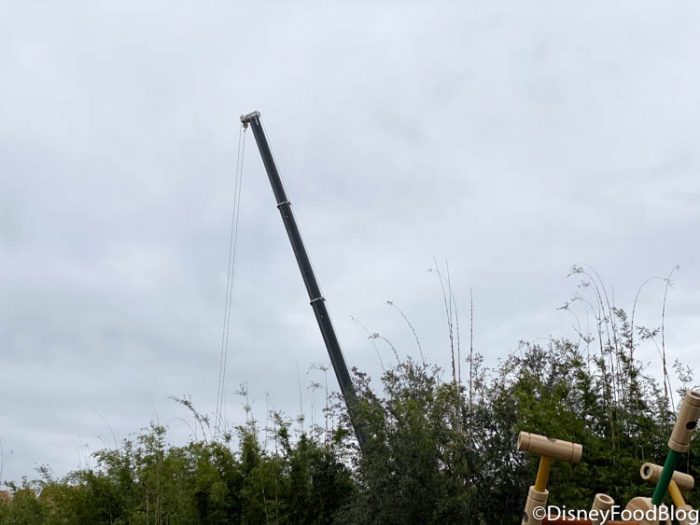 Are you as excited to see the new movie, Onward as we are? We could barely contain ourselves when we stumbled upon this Onward Mug for $19.99 at Celebrity 5 & 10! It’s the first piece of Onward merch we’ve seen at the parks so far, and we think it’s a good indication that is new film is going to totally ROCK! 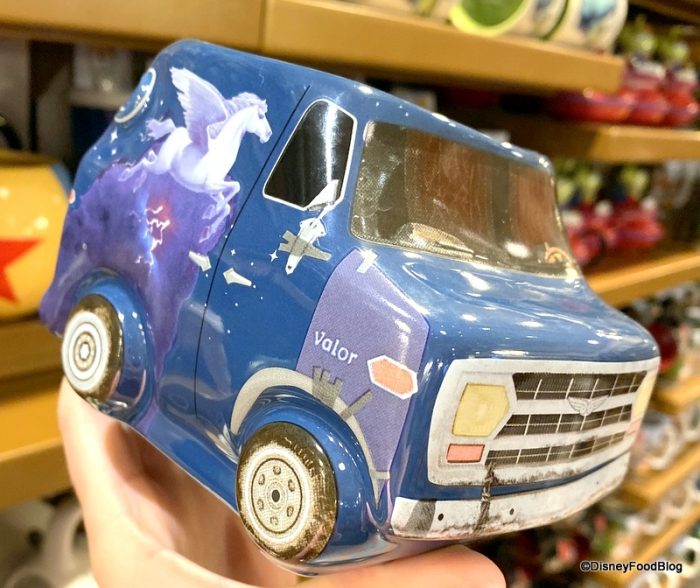 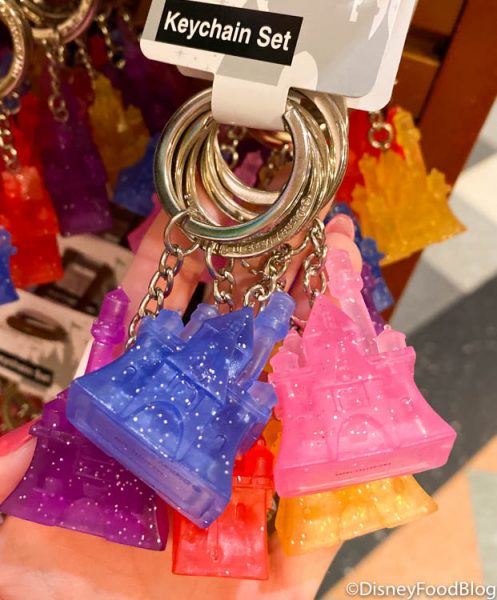 And we’re all just MAD over this next one! But really, how stinkin’ sweet is the Teacup Keychain Set? It totally reminds us of one of our favorite Disney park attractions! Pick this one up for $16.99! 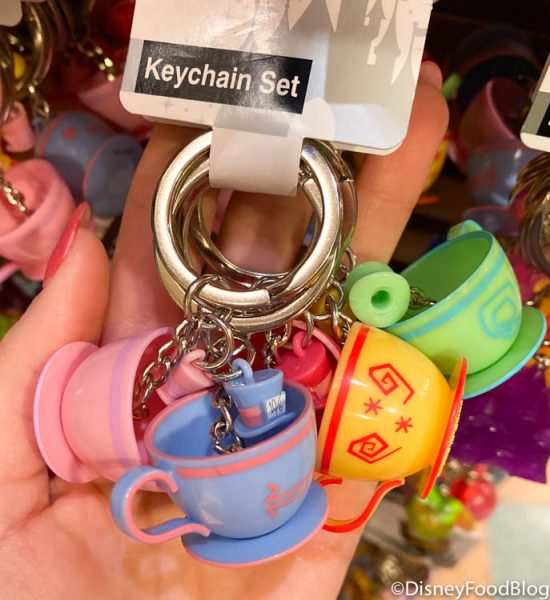 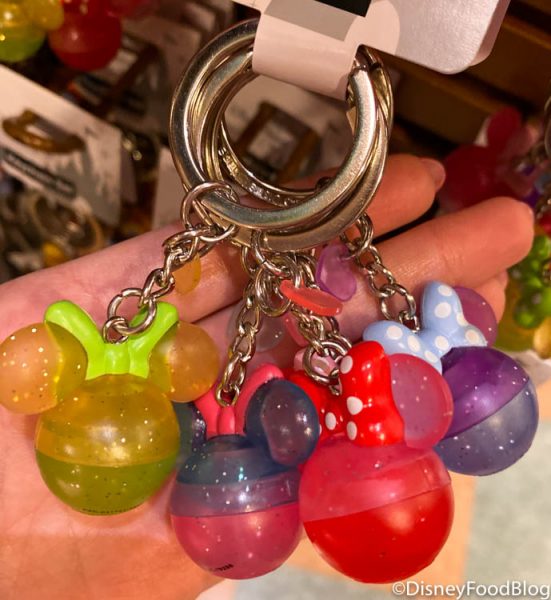 Remember when we told that the Floral Minnie Ears have now blossomed at Disney World? They’re blooming around Hollywood Studios currently for $29.99, but they’ll probably be making their way to other parks soon, so keep your eyes peeled! 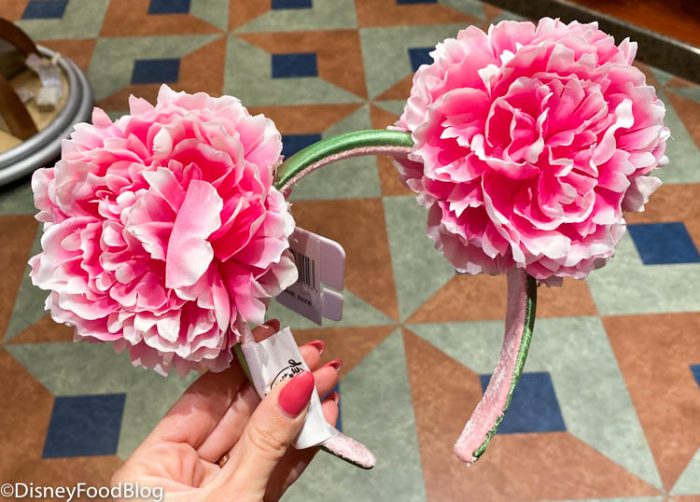 Find out more about the Floral Minnie Ears here!

And while previously we’ve seen the Lady and the Tramp Bowl at Disneyland, we finally spotted it at Disney World today! There’s also a matching Lady and the Tramp Feeding Mat that hasn’t made its way over here yet, but you can get the adorable bowl for $22.99! 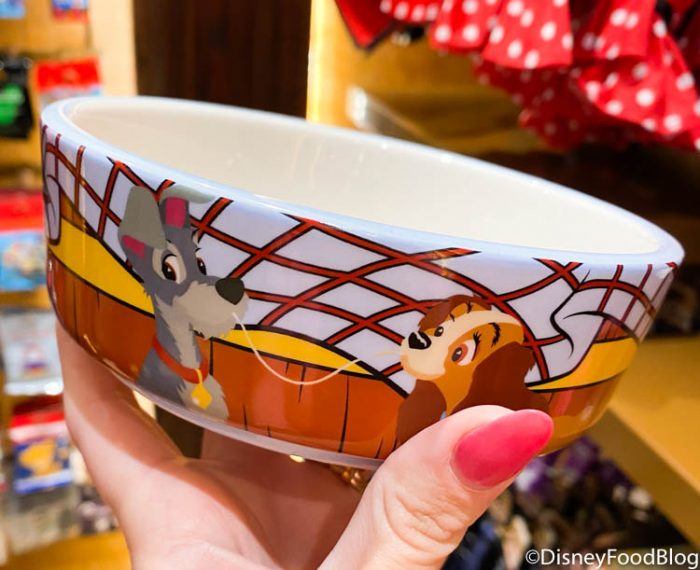 Lady and the Tramp Bowl

Find out more about the Lady and the Tramp Bowl (and the matching Feeding Mat) we’ve previously spotted in Disneyland here!

Just when you thought you’d seen the best retro-inspired parks merch, Disney just released an entirely NEW line of throwback gear! We spotted the 70s-80s style Disney World collection at Once Upon a Time while the Disneyland Resort has its own version of the merch available on the west coast! 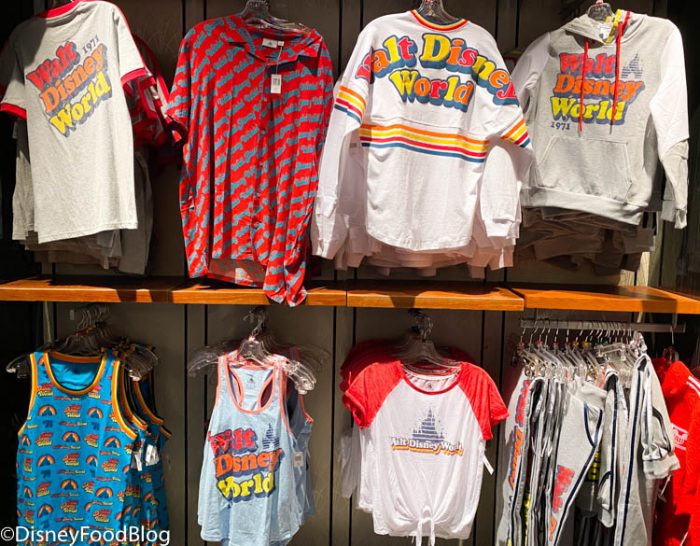 See the rest of the Retro Disney World and Disneyland Collection we’ve spotted so far here!

We know a couple unicorn-lovers in our lives who would love this Rainbow Unicorn Bag for $24.99! It’s seriously the CUTEST! 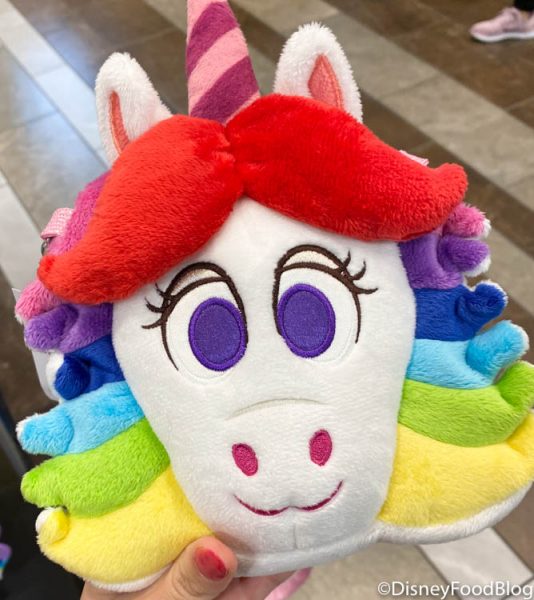 And this Squishy Cupcake Keychain for $12.99 reminded us a lot of the Squishy Donut Keychain we’ve seen previously! 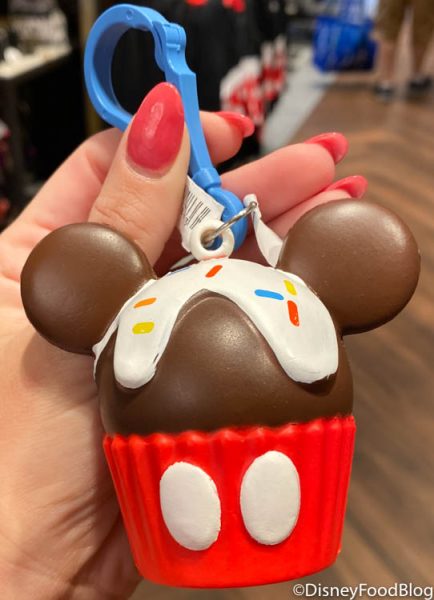 Well, folks! That’s a wrap for this edition of What’s New in Hollywood Studios! We’ll be back soon with more updates for you on our next walk! Until then, make sure you’ve signed up for our DFB newsletter to find out all the latest Disney World happenings!

Are you looking forward to watching Onward? Let us know if you’ll be heading to theaters to see it in the comments below!