Since Disney World and Disneyland have postponed their reopening dates indefinitely, we’ve recently seen a lot of changes happening recently which has us thinking Disney officials are anticipating a lengthy closure.

Now that the parks will remain closed until further notice and all non-essential Cast Members will be short-term furloughed starting April 19th, Disney has just announced all college internships and cultural programs are being canceled.

In a statement released by Disney on Twitter today regarding the current status of all applicable interns and international program candidates who were “due to arrive through early June,” these programs are now suspended. Disney will be refunding all fees as well as amending their eligibility requirements so that those who have been impacted by this recent decision can reapply. 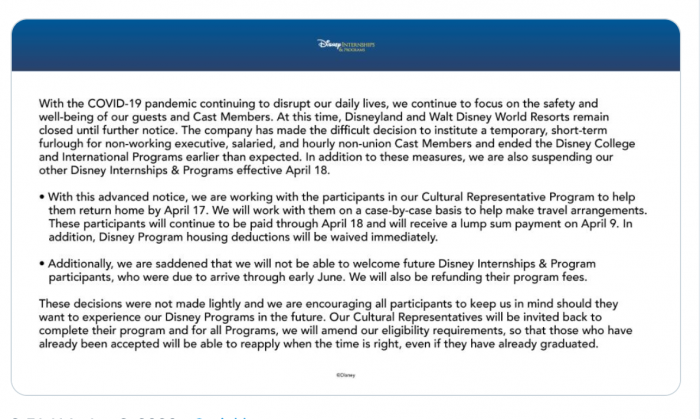 Since Disney doesn’t know when they’ll be able to safely reopen the parks, canceling these programs now will give interns and cultural representatives time to plan accordingly. Disney had also previously released all of its former college and cultural program participants who were working at the parks before they shut down.

We’ll continue to follow this story and update you with any additional information as it becomes available.

Are you or do you know someone who’s impacted by this outcome? Let us know in the comments below!