Select Disney World restaurants have now reopened, and we’re checking them out! So far, we’ve swung by Captain Cook’s to try the gorgeous Welcome Back Cupcake and gotten a quick Dole Whip fix at Pineapple Lanai! 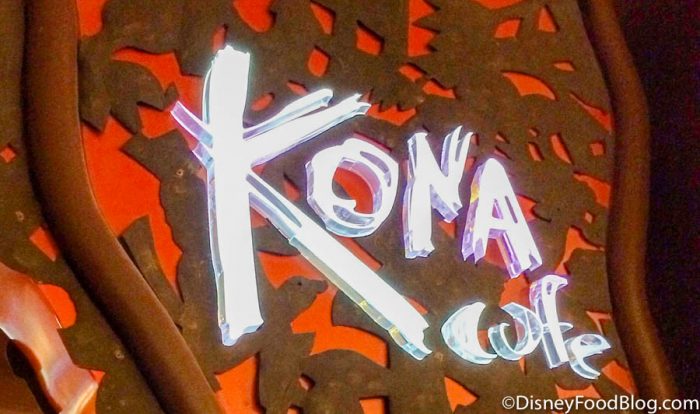 Now, we’re headed to Kona Cafe at Disney’s Polynesian Village Resort to scope it out — let’s take a look!

Kona Cafe is utilizing the new Mobile Dine Check-In feature that’s just been added to the My Disney Experience app! Instead of going up to the host stand, you can virtually let the restaurant know you’ve arrived for your reservation! 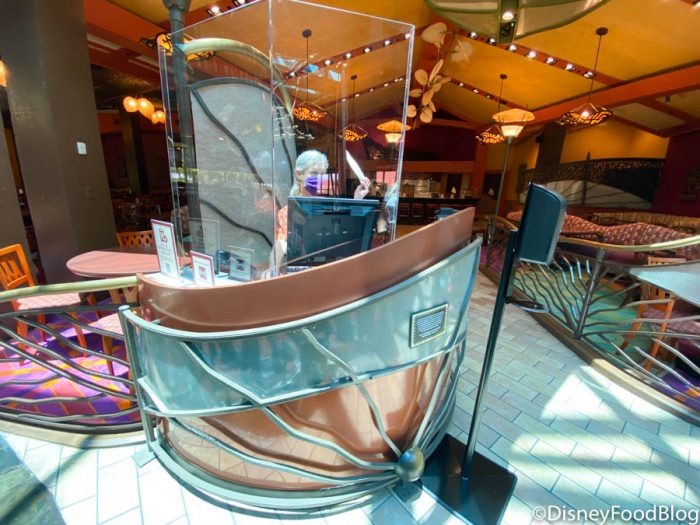 Once you’ve completed the contactless check-in, you’ll receive a separate notification when your table is ready — it’s that easy!

Kona Cafe tables and chairs have been spread apart. 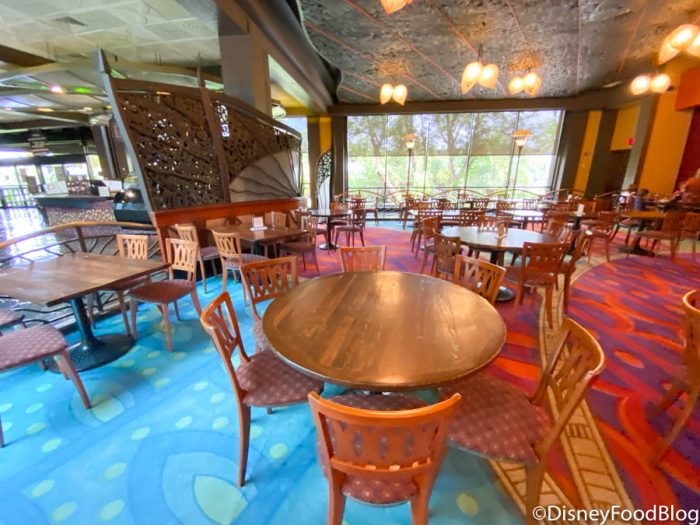 Some of the booths have been closed off to allow for optimal social distancing. Signs on the tables designated which tables were closed. 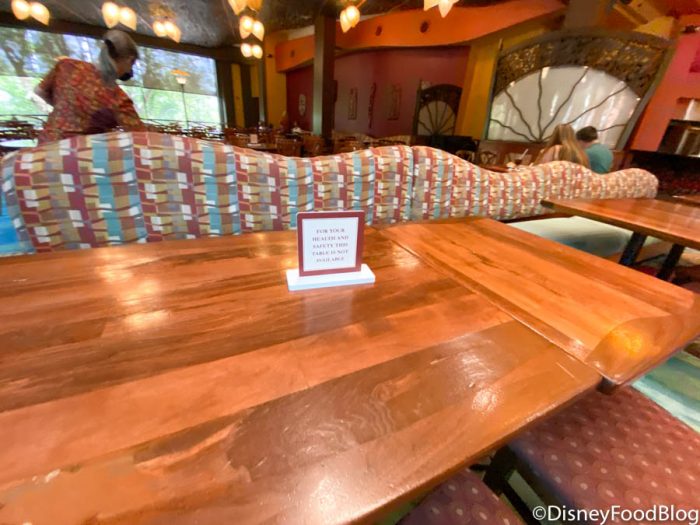 We also noticed the barstools around the sushi bar were present, but no longer a seating option for guests. 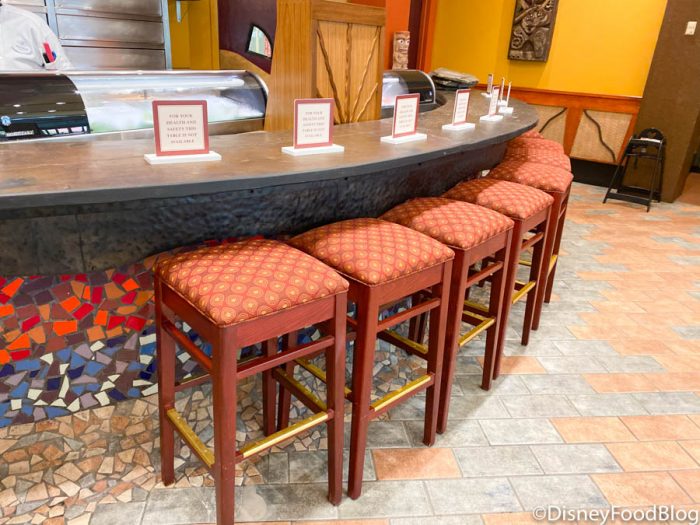 That covers the turf, so let’s check out the FOOD!

While some Disney World restaurants have a disposable paper menu available upon request, Kona Cafe only has a digital QR menu at this time.

Along with many other restaurants that have recently reopened, Kona Cafe’s menu has been reduced a great deal, but there are still plenty of offerings including sushi, sandwiches, salads, desserts, and most importantly for some, DRINKS!

It wouldn’t be a trip to Disney’s Polynesian Resort without something tropical to sip on! Kona Cafe doesn’t staff a bartender during lunch hours, but they DO have one ready to go for dinner service. Luckily, a manager was able to sub in and mix up a delicious Lapu Lapu for $18! 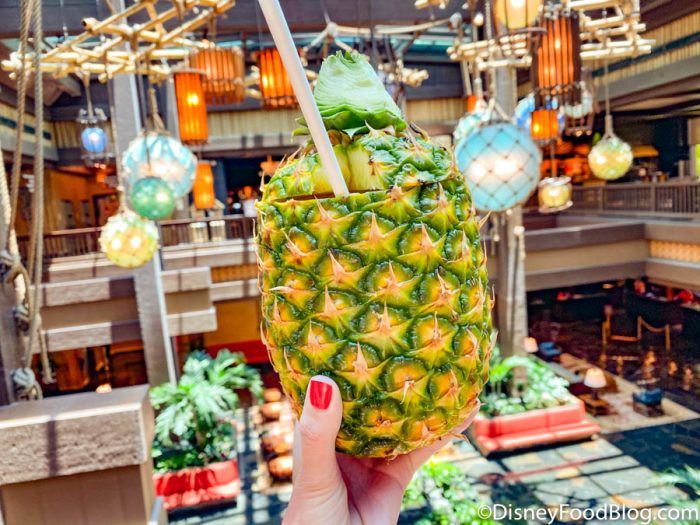 Now that we’ve been instantly transported to paradise (with a little help from the rum and fruit juices served in a blessed PINEAPPLE!) it’s time to order some FOOD! We’re going with the Crispy Pork and Vegetable Potstickers, Pork Belly Noodle Bowl, and Steak Salad! 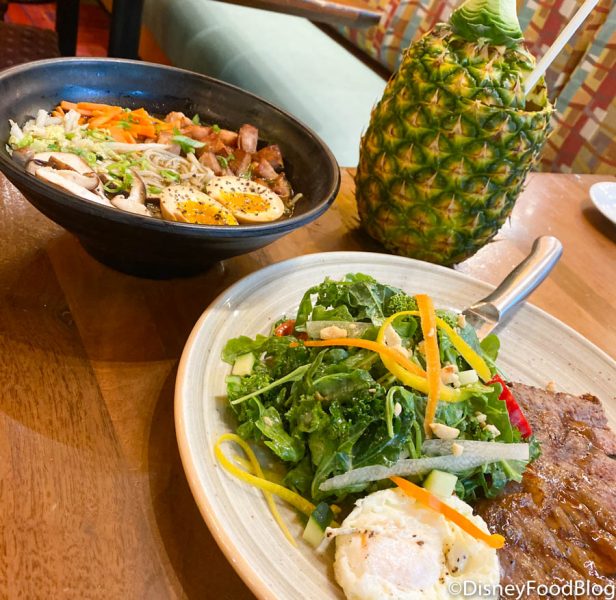 We should mention our meal came with complimentary bread, too! Kona Cafe used to serve an amazing macadamia nut butter with their rolls that we still miss. Nowadays, it’s a standard slice of butter. Nothing fancy, but still delicious! 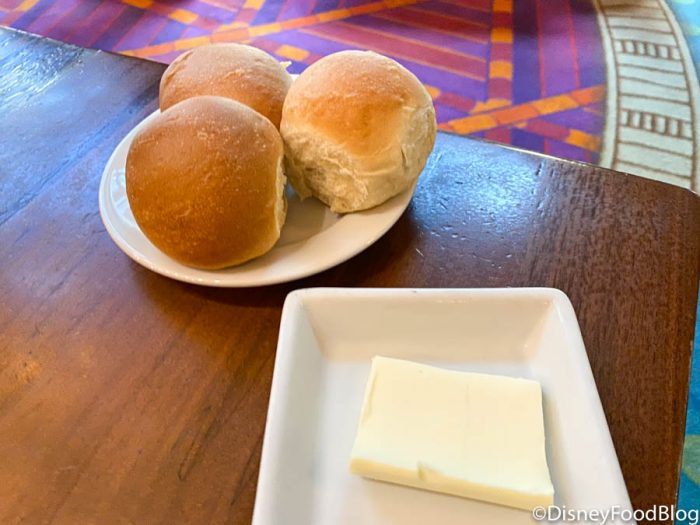 The Crispy Pork and Vegetable Potstickers were served with a soy vinaigrette dressing and cost $10. The had a really nice sear to them while the filling was nice and tender. 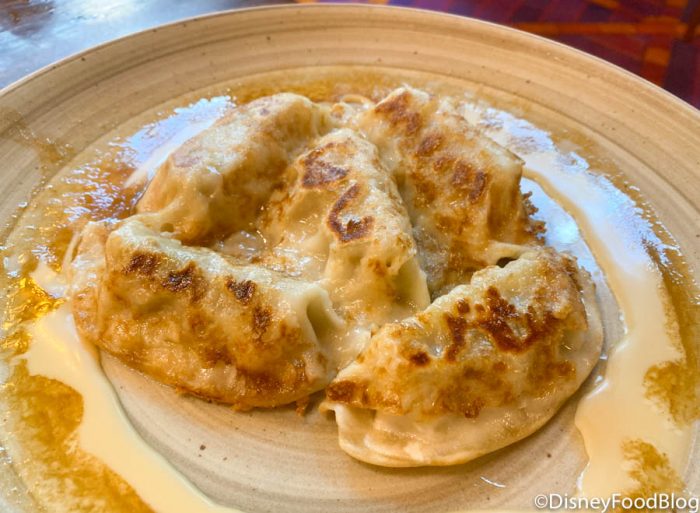 The Pork Belly Noodle Bowl for $24 was GREAT! The bowl includes rice noodles mixed with egg, mushrooms, bok choy, and other vegetables served in delicious broth! The star of the show is the pork belly though, and the hot sesame oil really adds a nice extra layer of depth to the dish. 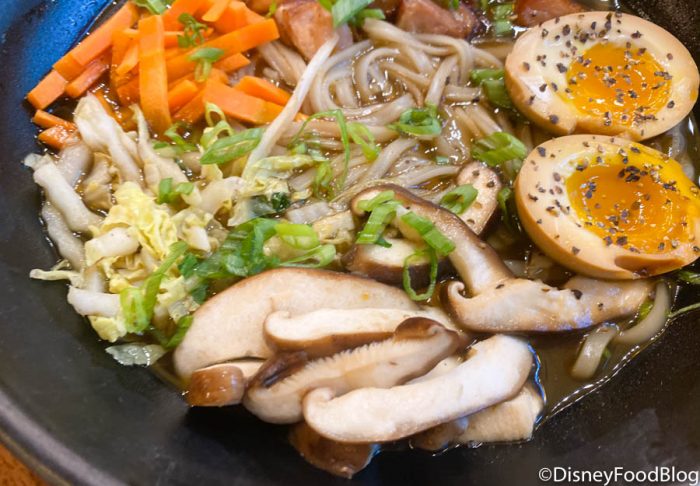 The last entrée we enjoyed was the Steak Salad for $23. It was served with an incredible sunny-side-up egg for those of you who enjoy a little runny yolk in yo’ life (which we happen to be big fans of!). When the yolk mixed with the Kona house vinaigrette dressing, it really made the flavors POP! 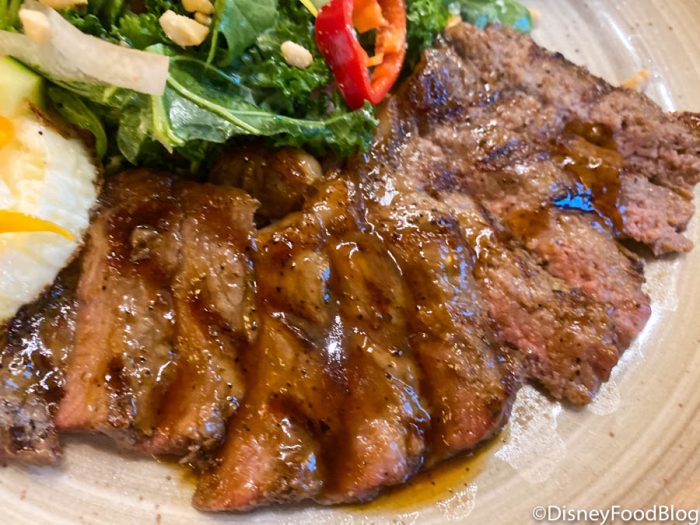 We would have liked to end our meal with a Hawaiian Pressed Coffee or  Banana Trifle, but they were out of a few menu items when we stopped by today. We’re guessing once things get up and runnin’ again, they’ll know how much product to stock and might make a few more menu adjustments when they do!

Overall, they have spaced out the restaurant and limited the menu like the rest of the restaurants we’ve eaten at lately, but of course, Kona Cafe has that signature Polynesian flair! We’ll be back soon with more Disney World eats (that’s right — we’ve miraculously saved some room) so stay tuned!

Here are the Disney World dining changes guests will experience this summer!

Are you surprised by any of the changes at Kona Cafe? Let us know in the comments!

« Another Epcot Performer Has Just Been Called Back to Disney World!
News! Universal Orlando Has Laid Off an Unknown Number of Team Members Following Reopening »