Florida has recently been a hot spot for the novel Coronavirus that’s been spreading globally since the beginning of the year, with cases and positivity rates soaring in early July, just as Walt Disney World opened the gates to its theme parks for the first time in four months.

Following this spike, public officials ordered various mandates to stop the spread, including closing bars and requiring masks in public spaces. And now we’re starting to see a bit of hope in the recent numbers.

WFLA has reported that 13.44% of those tested on Saturday were positive, which is the lowest number seen in two weeks.

And the positivity rate was calculated at 9.28%. This is the first time that this metric has been under 10% since June 24th in Florida.

Positivity rate is the number of first-time positive cases divided by the number of people tested that day. (Note that while case numbers themselves may be affected by some testing facilities being closed due to Hurricane Isaias, positivity rates scale based on how many tests are completed, and these numbers have seen a slight downward trend for the past week.)

Additionally, average case numbers are slowly decreasing over recent weeks, according to this chart by the Orlando Sentinel. 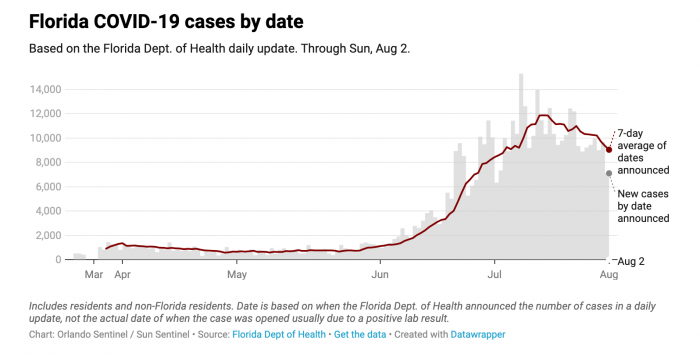 The downward trend in case numbers and positivity rate is showing that mandates and closures are “slowly but surely” working, says Orange County health official Dr. Raul Pino, according to the Sentinel. As a result, officials intend to maintain the current health and safety protocol, at least in Orange County, in order to see further gains — including potentially requiring mask-wearing well into 2021.

Death rates, however, continue to rise. This is expected, knowing that death numbers lag days to weeks after case numbers, but is still a concern for Florida health officials.

And there are concerns about Coronavirus spikes due to schools reopening in the coming days. One student and one staff member already tested positive at a reopened Indiana school within the first few days of instruction.

We will continue to keep an eye on the developing story in Florida, and especially in Orange County and Osceola County, both of which Disney World calls home.

Masks Could Be Required in Florida Through the Spring. Read More Here.

Have you been back to Florida’s theme park recently? Let us know in the comments below!

« ALL the Disney NEWS and REVIEWS This Week!
Four NEW Classic Milkshake Flavors Are Now Available at Chicken Guy in Disney Springs! »