When Was the Last Time You Visited Disney World?

Disney doesn’t make these changes in a vacuum though. They are continuously surveying guests during their trips, after trips, or ahead of upcoming trips. These surveys can sometimes show what specific things Disney may be looking at with extra caution. Recently, one of our readers got a survey where Disney asked about a LOT of health & safety measures, Park Passes, and more.

A huge thank you to Dustin R., one of our readers who received a survey from Disney about their upcoming trip and was kind enough to share it with us! Again, Dustin has an upcoming trip to Disney World in 2022 which is what Disney was inquiring about.

At the beginning of the survey, there are some general questions about where the guest permanently resides… 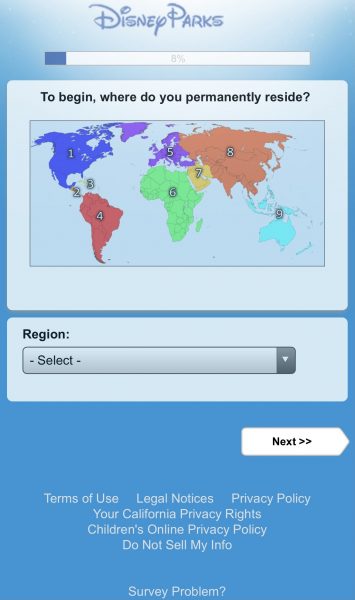 …the age of the guest answering the survey… 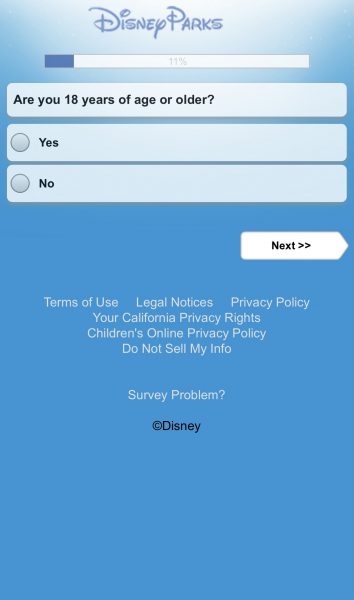 …what industry the person answering the survey works in, and more. 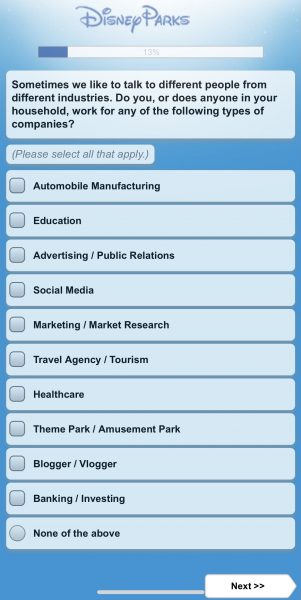 The survey then asked about the guest’s upcoming trip, which in Dustin’s case is 2022.

Many guests have expressed their discontent at Disney discontinuing the Magical Express, so they may be asking this question to see how many guests are in fact aware of this change. 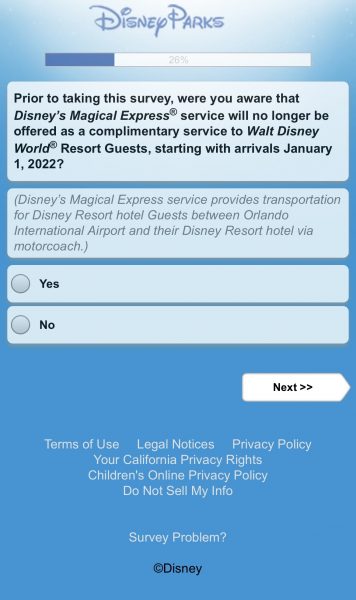 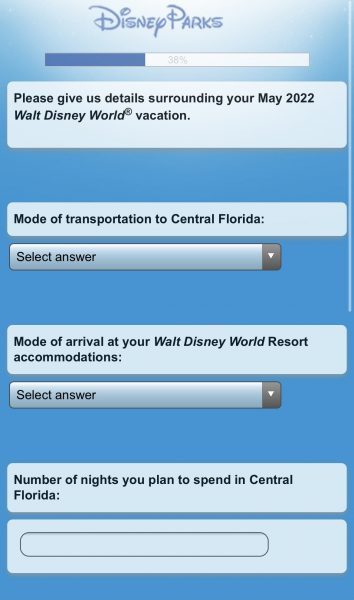 It also asked about the number of nights they plan to spend in Central Florida.

Click here to see more about the new transportation service that will replace the Magical Express.

The survey also asks whether guests are aware of the Park Pass reservation system, a system that has been in place since the parks reopened. Considering that Dustin’s trip isn’t until 2022, it is interesting to see Disney asking about Park Passes. Park Passes are currently able to be booked through part of 2023, but Disney has not specified exactly how long Park Passes will actually be sticking around. This could be an indication that Park Pass may be around for a while, or that they’re simply surveying guests to see their knowledge about the system. 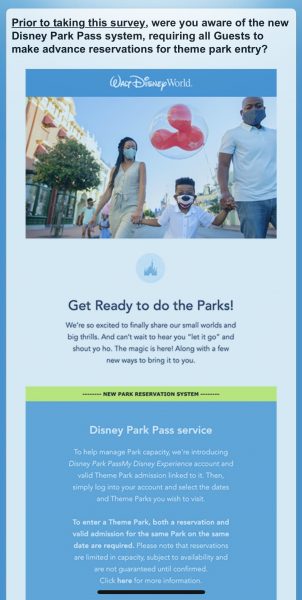 The survey also asked about whether the guest was able to complete all of the reservations they wanted. 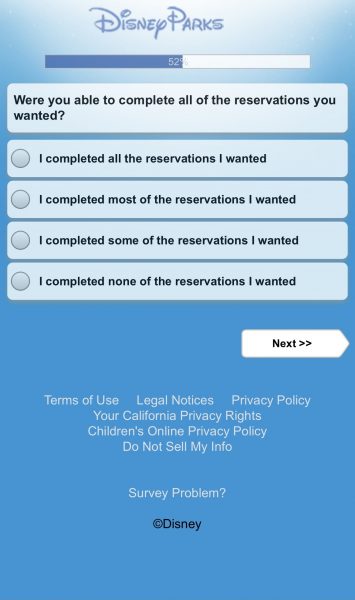 We have seen Park Pass availability filling up for some dates and later being restocked. It looks like Disney is trying to look at whether guests are consistently able to get the passes they want.

When it comes to COVID-19 and safety precautions and some of Disney’s more limited offerings, the survey had a number of questions on the topic.

The COVID-19 vaccine is available now and many individuals are eligible, so it appears this may have been an older question in the way it was drafted, but it still shows Disney’s interest in how the pandemic may be affecting guests’ feelings toward future trips. 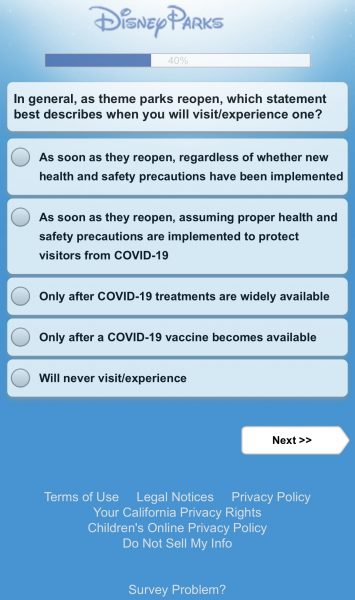 At one point, the survey also asked how committed the guest was to their future trip, and what factors have impacted that level of commitment. Specifically, the survey asked the guest to mark which protocols have influenced the guest’s level of commitment including physical distancing measures, temperature screenings (which will soon be phased out), capacity limits (which may increase soon), face mask requirements, and more. 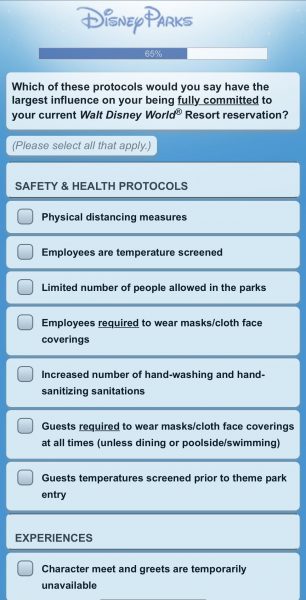 It also asked about some experiences (or the lack thereof) that might have impacted their commitment level, including character meet-and-greets being unavailable, limited character dining experiences, the fact that FastPass+ is still unavailable, parades and fireworks being currently suspended, and Extra Magic Hours being suspended. 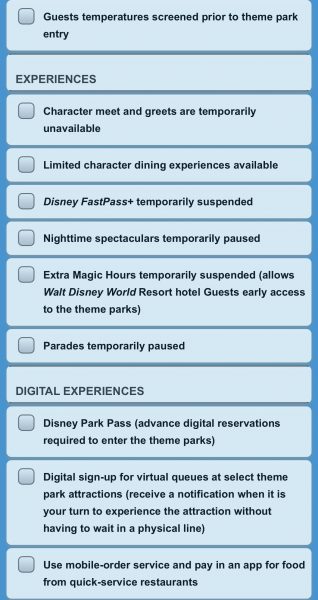 It seems Disney is very much aware that the suspension of many of these experiences could in fact impact guests’ decisions to visit the parks. Disney is working on bringing back some experiences. Character dining for dinner will soon be available at Chef Mickey’s and Festival of the Lion King will be returning soon.

Disney also asked some questions about other factors that might have impacted the guest’s commitment level to their future vacation. Among these factors were things like the availability of a COVID-19 vaccine, the pace of COVID-19 infections in Central Florida, a fear of getting ill while on vacation, and more. 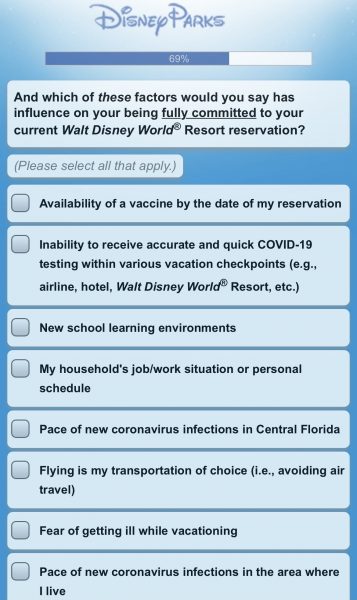 In terms of the 2022 trip, the survey also asked the guest why they chose to book a trip in 2022. Some of the possible factors that influenced this decision listed by Disney for guests to select included that the guest is “anticipating that some Walt Disney World resort experiences will resume normal operations”… 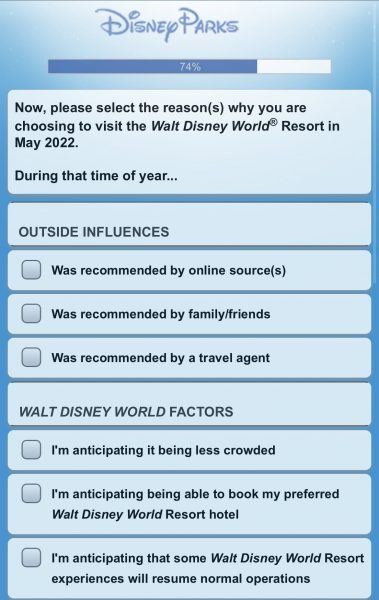 …the 50th Anniversary celebrations, the impact of vaccines or concerns about health/safety risks, and more. 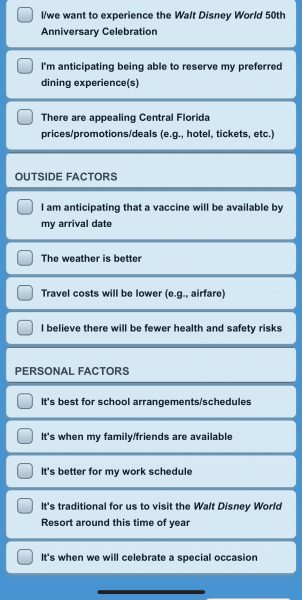 Interestingly, the survey also asked the guest to note if, after hearing about all of Disney World’s protocols throughout the survey, they feel like their level of commitment to their future trip has changed. 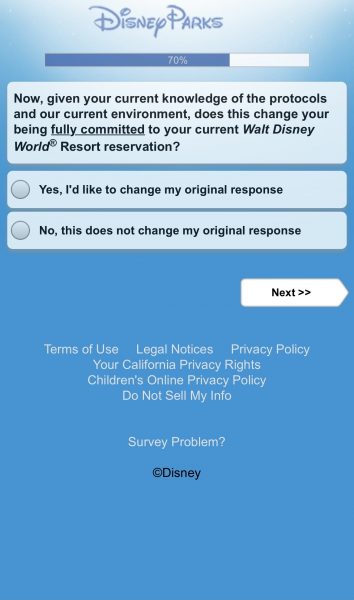 It seems Disney is really trying to get a sense for what is impacting guests’ decisions to travel during a certain time, and whether any of Disney’s health/safety protocols have impacted guests’ decision to visit the parks.

Things are continuously changing in Disney World, and we’ve seen that recently with the announcement that temperature checks will be phased out. But Disney still has many other health/safety protocols in place. No COVID-19 cases have been traced back to Disney and Disney presumably wants to keep it that way. So, it will be interesting to see how Disney’s policies continue to evolve.

We’ll be on the lookout for any updates and let you know what we find.

Click here to see 3 things that are back to normal in Disney World.

Have you received a Disney survey with any interesting questions? Tell us in the comments!

« PHOTOS & VIDEO! Behind-the-Scenes Look at the Star Wars Bar Coming to the Disney Wish
The Most Bizarre Disasters in Disney World »