Have you ever heard of the term “E-Ticket” attraction when you’ve been doing your research on or visiting Disney World? 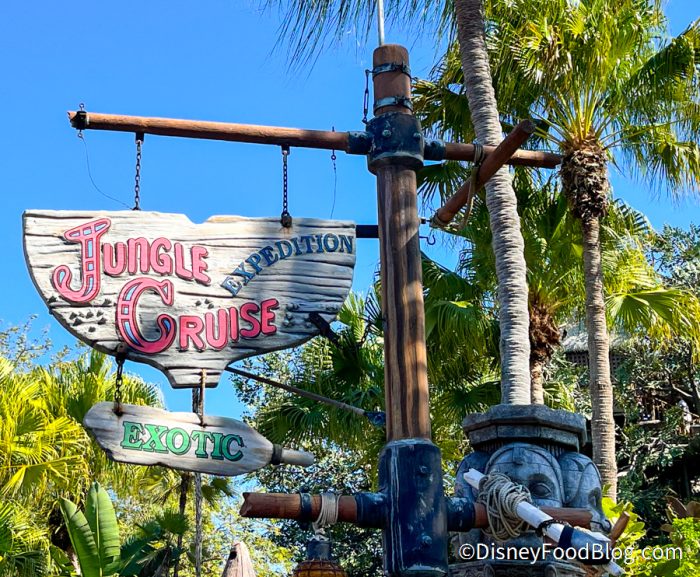 Jungle Cruise was once an E-ticket attraction

It’s not something that’s talked about all too often, but it’s a BIG blast from Disney World’s past! When the parks first opened, there was a flat rate to get into the parks (unlike now where prices vary depending on when you visit) but if you wanted to ride anything (or do anything else aside from people watching for that matter) you had to pay separately. These separate ride tickets were rated A, B, C, D, and E, with the E-Ticket rides being your ticket onto the most popular attractions. Nowadays, we still see references to these tickets pop up in the parks for special photo ops or on merchandise, and today we spotted a way that you can take home ALL of the e-tickets in honor of Disney World’s 50th anniversary!

We’ve been having fun checking out all of the vintage and retro souvenirs being released for Disney World’s 50th Anniversary Celebration. You can sport an outfit featuring a MAJOR parade throwback, walk around in crocs featuring Disney World’s OG park map, and more. And, now there’s a new item for Disney history buffs — an E-Ticket Coaster Set! 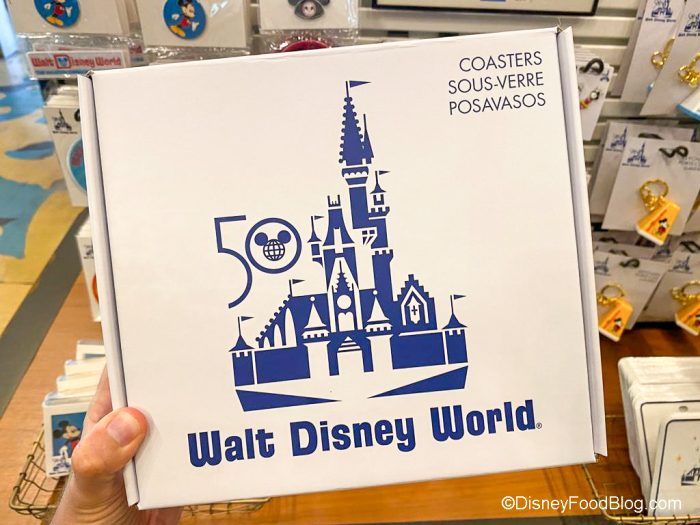 The set comes with 5 different plates that each represent a different Magic Kingdom ticket from 1971. Now, Disney is calling these “coasters,” but they’re much more like decorative plates that you can store your jewelry, keys, or any other miscellaneous items on. 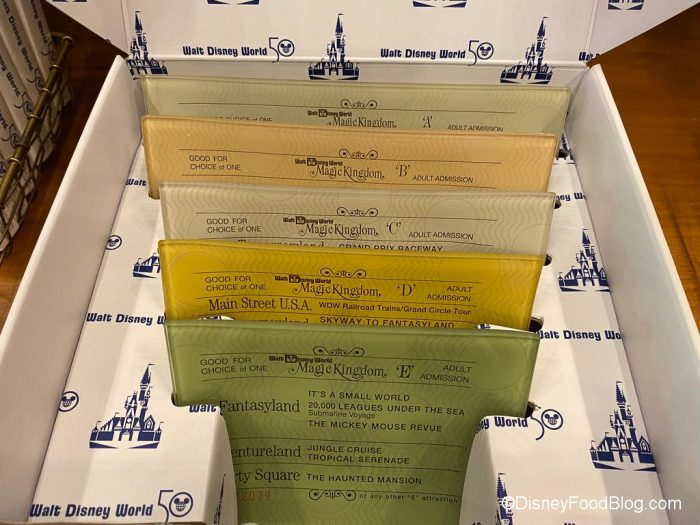 Each plate is a different size with the “A” Ticket being the largest. It is labeled just like the original tickets noting that you’d be able to get on Omnibus, Horse-Drawn Street Cars, Main Street Vehicles, or Cinderella’s Golden Carrousel with the ticket. 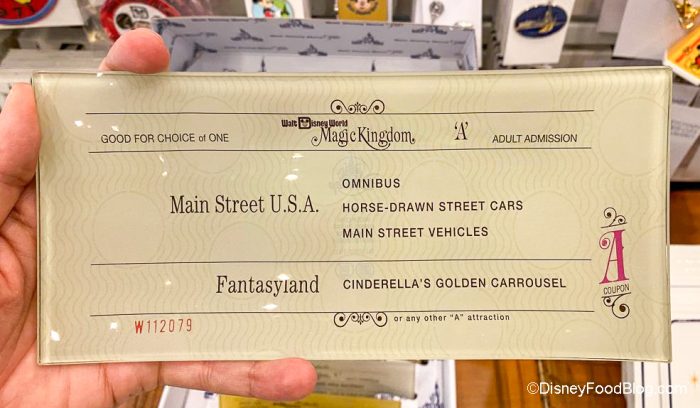 The “B” Ticket was good for entrance into Main Street Cinema, a chance at the Frontierland Shootin’ Gallery, or a ride on the Mike Fink Keel Boats. It also granted you admission into the Swiss Family Treehouse. It is the second-largest plate in the set. 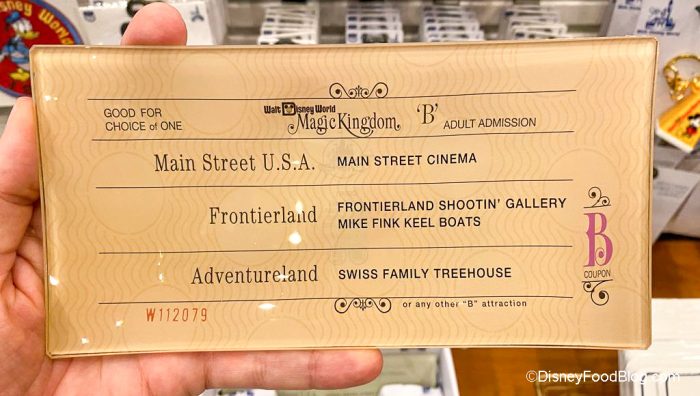 Next up is the “C” Ticket, which would’ve given you a ride on the Grand Prix Raceway, Dumbo, Peter Pan’s Flight, Snow White’s Adventures, Mr. Toad’s Wild Ride, Mad Tea Party, or Davy Crocket’s Explorer Canoes. 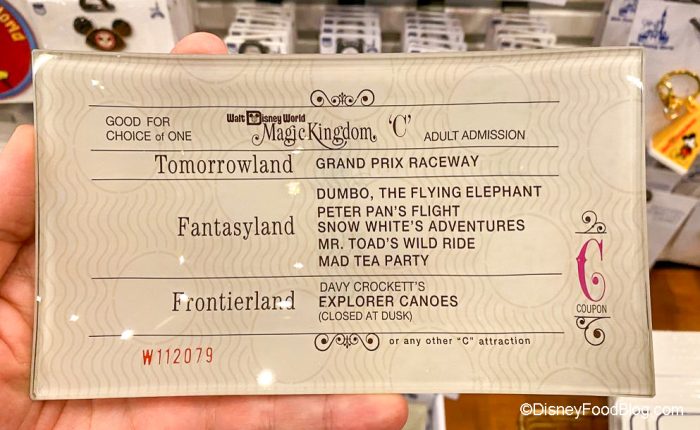 The “D” Ticket got you a ride on the Skyway, Flight to the Moon, Country Bear Jamboree, The Hall of Presidents, or the Adm. Joe Fowler Riverboat. 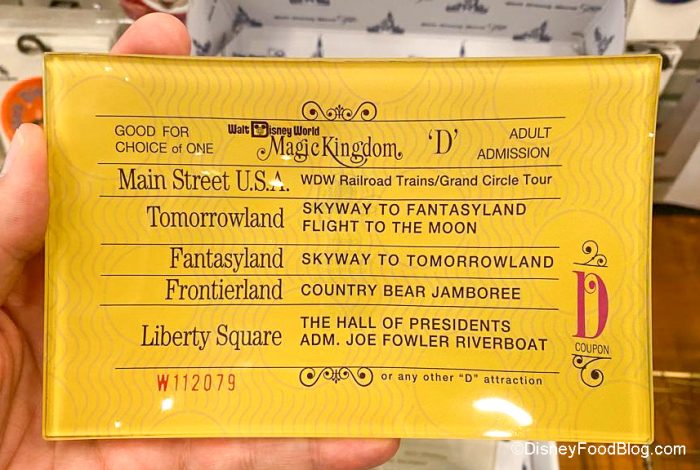 And, lastly, the highly-prized “E” Ticket, was good for the most popular rides including “it’s a small world,” 20,000 Leagues Under The Sea, The Mickey Mouse Revue, Jungle Cruise, Tropical Serenade, and The Haunted Mansion. This tray is the smallest in the set but is more square-shaped versus rectangular like the A Ticket plate. 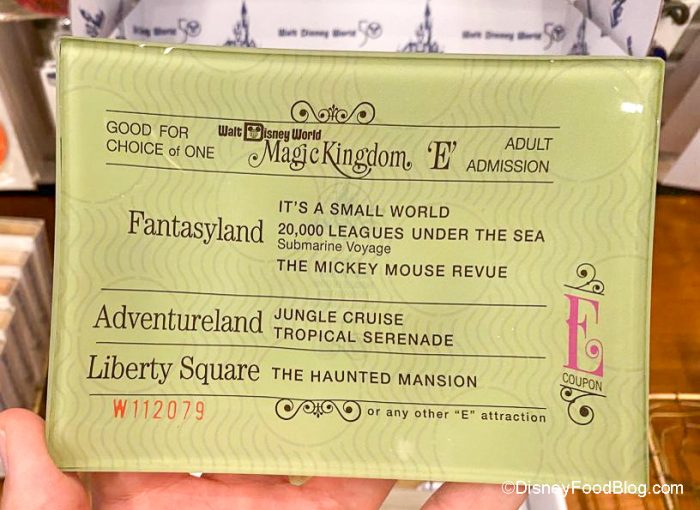 This Coaster Set is the newest addition to Disney World’s 50th Anniversary Vault Collection, so you can find it in several stores across the parks. We found these at Chester & Hester’s at Disney’s Animal Kingdom and then later also saw them at Celebrity 5 & 10 at Disney’s Hollywood Studios.

Which ticket are you getting? I, personally, will be getting an E-ticket 😌

The set of five coasters is $24.99, which is a small price to pay for a fun vintage souvenir! Of course, we’ll let you know if we spot any other new 50th anniversary souvenirs at Disney World, so don’t go anywhere!

Did you know about Disney World’s e-tickets? Let us know in the comments!

« 🚨EPCOT Is SELLING OUT for the Grand Opening of the Guardians of the Galaxy Coaster🚨
5 Disney Deals on Amazon You’ll Want to See Before They’re Gone! »