The first words that visitors to Disney World’s main EPCOT web page read are “Celebrate the Stories That Connect People and Cultures Around the World.” The second sentence? “Festival Fun Awaits You Today.” 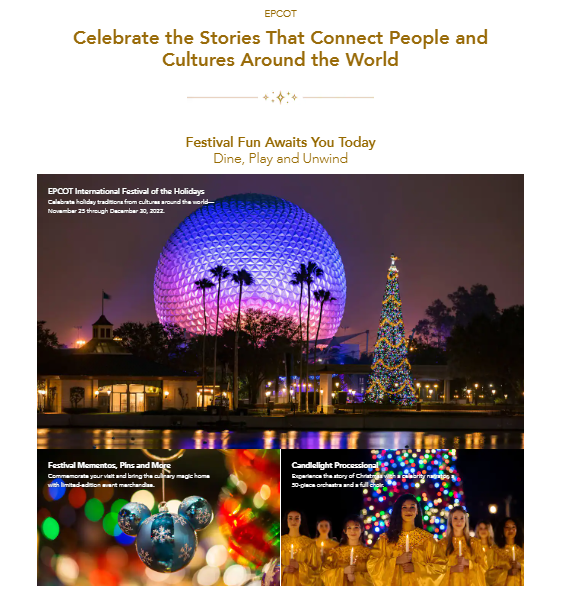 While the main park icon at EPCOT is Spaceship Earth (aka the EPCOT “ball”), it could just as well be a festival booth. The ubiquitous booths that serve small plates and drinks during four festivals that cover the majority of days each year are a fun addition for most park goers — but they’re also the secret weapon Disney World is using to fill the park with returning visitors.

As Disney World prepares for the opening of the EPCOT International Festival of the Holidays on Nov. 25, we’re taking a look at why Disney relies so much on festival days to fill its second park.

Festivals were a much-discussed topic at the IAAPA Expo — an annual gathering of 30,000-plus amusement industry professionals held in Orlando this month. Food and beverage leaders packed into sessions about festival foods, festival drinks, and marketing all with the goal to “do festivals well without a Disney budget,” said Jeff Whiting, VP of Operations for Whiting’s Foods at the Santa Cruz Beach Boardwalk.

While there are also special activities and merchandise, the food at EPCOT’s festivals leads the way. Many people eagerly await the release of festival menus to plan their days, and snack lovers and foodies who may never have visited EPCOT for its permanent attractions, may come for a limited-time taste of new foods. 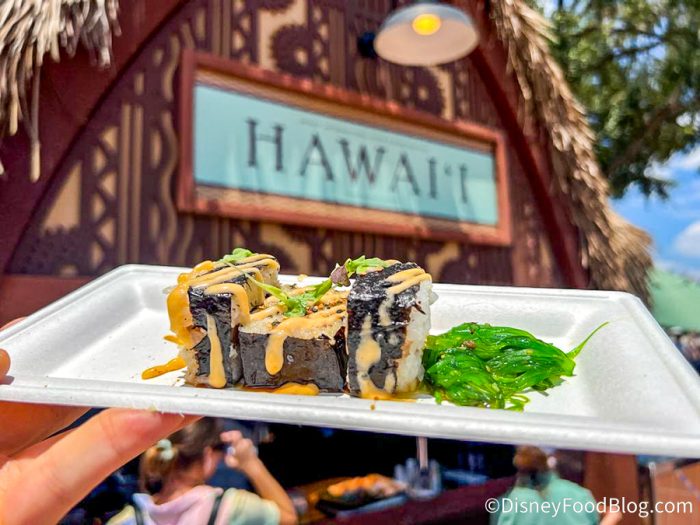 “If you can up your culinary game,” said Bernard Campbell, the IAAPA Food & Beverage Committee chair, “you’re driving a whole different guest into the park.”

Nancy Hamlin is Senior VP for In-Park Resale at Cedar Fair Entertainment Company, whose Knott’s Berry Farm Boysenberry Festival offers up dishes such as Boysenberry Cowboy Chili with Mac and Cheese, and Elote with a Boysenberry Butter, Mayo, and Cotija Cheese. She also told IAAPA Expo attendees that the food is key to driving crowds. 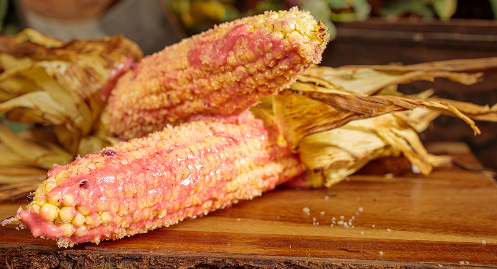 “People will say I want to go to that event for the food,” Hamlin said. 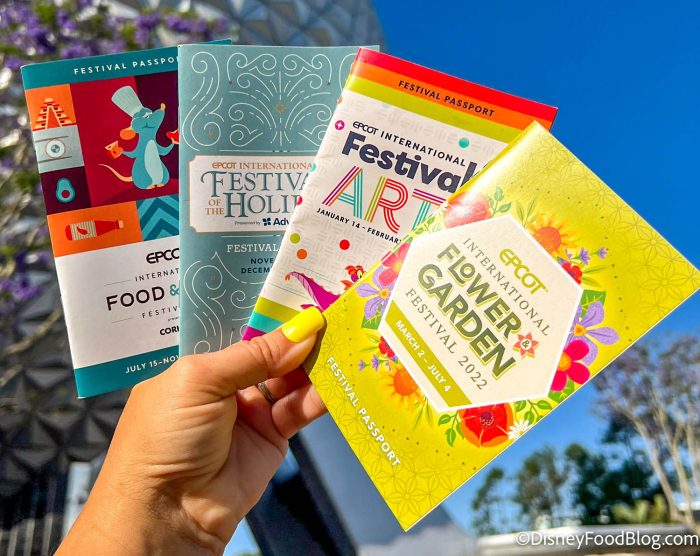 Eugene Naughton, president of Dollywood, said when he entered the amusement park industry, time off during the winter appealed to him — since many parks close when the weather in their regions turns cold. Now, Dollywood’s Harvest Festival and Smoky Mountain Christmas Festival draw so many people that Dollywood has its largest attendance in the months of October, November and December each year. 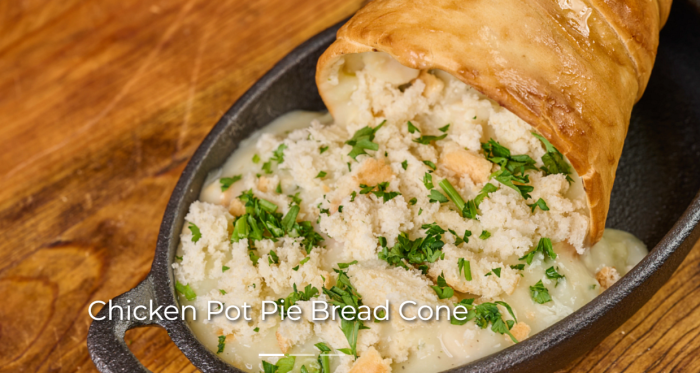 “I’m trying to fill the calendar year with festival days,” Naughton said of Dollywood operations. He confirmed that 86% of the days in Dollywood’s operating season are during one of the theme park’s festivals.

With their elaborate landscaping, free entertainment and dozens of limited-time food and beverage offerings, EPCOT’s Festivals can make Disney World visitors feel like their getting something “extra” during their trip. And who doesn’t like free extras? 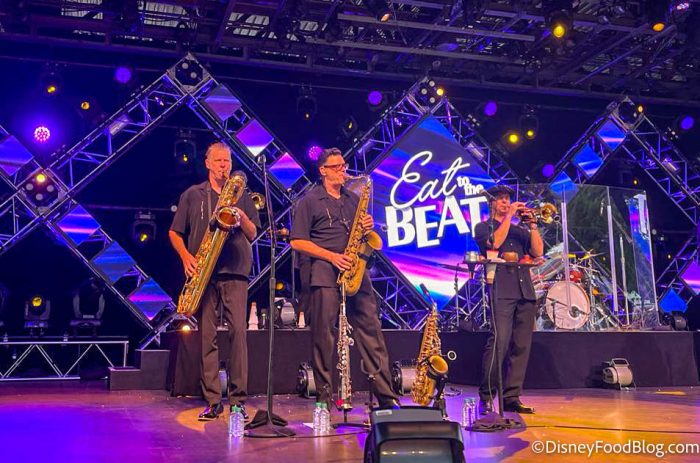 “It fills the park with extra experiences and drives a bigger value,” Naughton said of Dollywood’s festivals.

With all of the limited-time foods to try and merch to buy, it can be tempting to blow your budget at an EPCOT festival (believe us, we’ve been there). And, well, that’s exactly what Disney World wants. Industry leaders said festivals are a no-brainer in growing penetration for food and beverage at theme parks. In other words, even if you weren’t planning to buy snacks during your EPCOT day, with all of those tempting festival booths scattered around the park, you’re much more likely to change your mind and spend some money.

The Grand Carnivale Parade at King’s Island in Cincinnati

Hamlin said the Grand Carnivale Festival held at several Cedar Fair theme parks increases the amount of time guests spend in its parks — as they stay later into the evening to watch the festival parade. Likewise, EPCOT guests may be staying later into the evening to watch the special festival entertainment. More time in the park means more time for you to spend money on food and merchandise.

Naughton of Dollywood told IAAPA attendees that festivals can also help with park marketing. “What I love about festivals is the storytelling that comes to each of the events,” he said. And guests tell those stories — and show all that Instagrammable food — on their social media accounts. 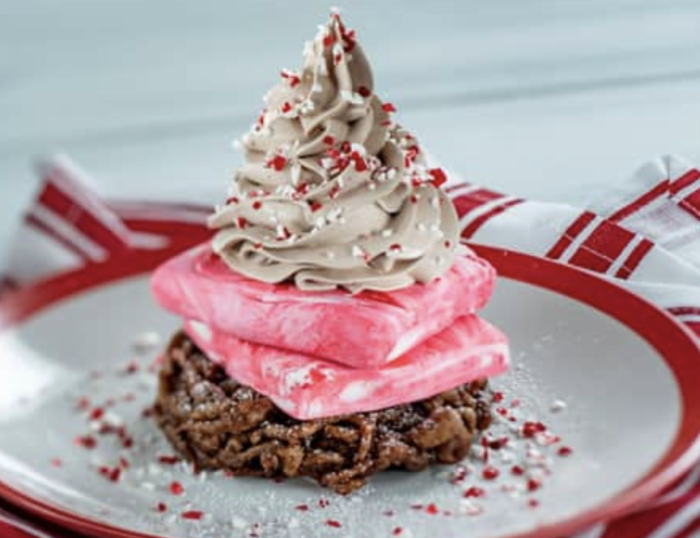 “Come for the food, stay for the rides,” is the goal, according to Campbell.

We’re all about Disney FOOD here at DFB. We even wrote the book on it! Check out our DFB Guide to Walt Disney World Dining in an ebook format you can easily download to your tablet or smartphone. Use code WDW2023 to save 25% on the cover price!

Check out these posts on the upcoming EPCOT International Festival of the Holidays:

What do you think about EPCOT’s many festivals? Tell us in the comments!

« FULL REVIEW: Have Breakfast With Santa at Maria & Enzo’s in Disney Springs With Us!
Don’t Wait! These Disney Cyber Monday Deals Will Be Gone Before You Know It »