Bright suns, travelers! We’re headed to a galaxy far, far away (Star Wars: Galaxy’s Edge, to be exact) to check out one of the hottest spots in Disneyland! Once the parks opened after being closed for over 400 days, we just HAD to get to Oga’s Cantina for a cocktail (or two!). 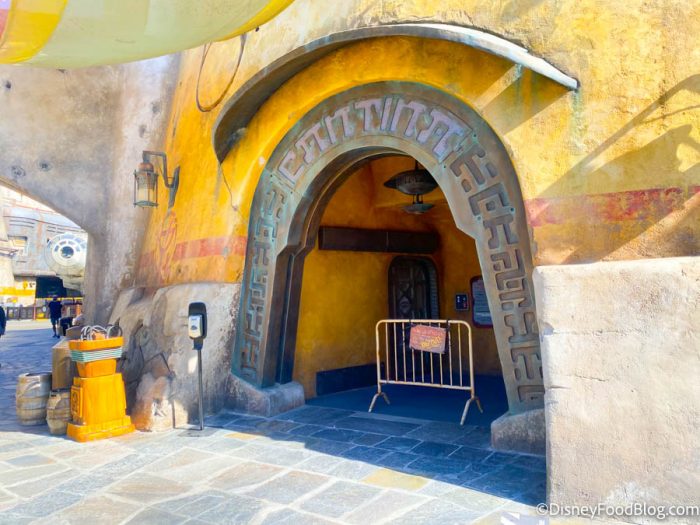 Oga’s Cantina is located in Black Spire Outpost, the village on the planet Batuu where Star Wars: Galaxy’ Edge is set. In reality…it’s kinda tucked behind Frontierland in Disneyland proper. 😉 It’s famous for out-of-this-world concoctions and being one of the HARDEST reservations to snag in Disneyland (and Disney World too!). We snagged a reservation right after it reopened. Let’s see if this “wretched hive of scum and villainy” (sorry, wrong Star Wars Cantina!) still holds up!

END_OF_DOCUMENT_TOKEN_TO_BE_REPLACED

When we first visited Oga’s Cantina in Disney World’s Star Wars: Galaxy’s Edge, we noticed that quite a few items had higher prices than their counterparts in Disneyland. And now, it looks like Disneyland’s menu has been updated to reflect higher prices as well.

END_OF_DOCUMENT_TOKEN_TO_BE_REPLACED Earlier this week we took a tour of the local watering hole of Black Spire Outpost (and you can see it all here). END_OF_DOCUMENT_TOKEN_TO_BE_REPLACED

We are, at long last, in Oga’s Cantina on planet Batuu in Star Wars: Galaxy’s Edge!

CAN YOU BELIEVE IT?!? We’ve been dreaming about this for YEARS! But the dreaming is over, and it’s time for reality. END_OF_DOCUMENT_TOKEN_TO_BE_REPLACED