We are always on the lookout for the latest foods and restaurants in the Disney Parks, but you may be surprised to hear the storied past of how some of your favorite foods and eateries in Disneyland and Disney World came to be (or didn’t quite make end up as intended!).

Today we are delving into 10 surprising facts about Disney food that you may have never heard about!

In the days of themed Coke bottles in the parks, it might be hard to picture of Disneyland or Disney World selling soft drinks other than Coco-Cola, but in the early days, they were all about Pepsi too! When Disneyland first opened, Coca-Cola and Pepsi Cola we both sold in the park. Both companies were part of the original 33 investors in Disneyland, which is rumored to be one of the ways Club 33 got its name.

Pepsi’s partnership with Disneyland led to Walt and his team creating Pepsi’s main attraction for their pavilion at the 1964-1965 World’s Fair. What did they end up building? Oh, just a little show about the children of the world called “it’s a small world.” This attraction was one of the hits of the World’s Fair and is now a staple in Disney Parks around the world!

When Disney World first opened, Pepsi sponsored the Country Bear Jamboree which made its debut on opening day! They also sponsored nearby Pecos Bill Tall Tale Inn and Cafe.

Disney World and Disneyland have since transitioned to only sell Coca-Cola products, but when Shanghai Disneyland opened in 2016, it sold exclusively Pepsi products, rejoining the Disney and Pepsi labels once again.

In 1997, the Walt Disney Company entered a ten year partnership that Michael Eisner, CEO, deemed “the most ambitious promotional effort ever developed between two of the world’s best-known family-friendly brands.” Disney’s contract with McDonald’s not only changed the ad landscape for the popular fast-food chain but also altered the Disney Parks as we knew them!

Guests could get McDonald’s French Fries at Fairfax Fries in Disney’s Hollywood Studios, Petrifries in Animal Kingdom’s Dinoland, U.S.A., and Frontierland Fries or Village Fry Shoppe in Disney’s Magic Kingdom. Or if you needed a sweet treat to dunk your fries into, you could grab McDonald’s fries, Chicken McNuggets, and McFlurry desserts at Epcot’s Refreshment Port. If you couldn’t get your McDonald’s fix from sides alone, Restaurantosaurus sold even more familiar items like Happy Meals.

After 10 years of working together, the contract expired and Disney began to remove the McDonald’s branding from the parks. All of the in-park McDonald’s locations were phased out by 2008, but the two free-standing restaurants in Downtown Disney Orlando (now Disney Springs) and nearby the All-Star Resorts remained. It didn’t take long for the Downtown Disney location to close in 2010 and leave the location near the All-Star Resort to hold the golden arches alone. 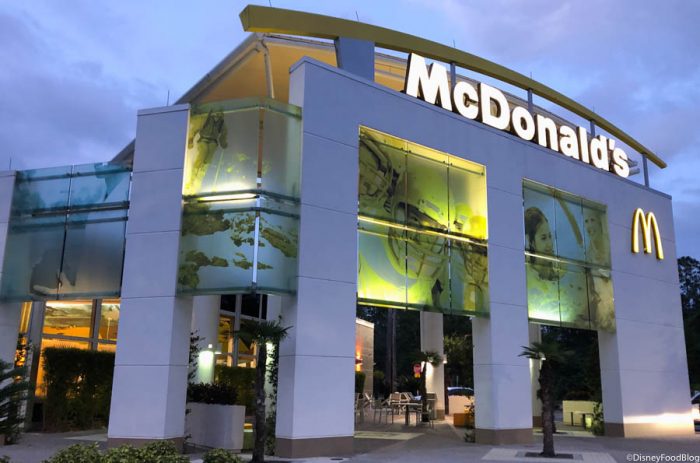 The long told story goes that Walt Disney found a mechanical bird in a cage in a little shop in New Orleans that gave him the inspiration to pursue what grew into audio-animatronics! One of his early visions for this technology was a singing bird show, but not quite how you know it today! Walt’s original vision for the Enchanted Tiki Room was to create a dinner show for his guests. He envisioned all guests being seated and served at the same time, which would allow the show to run on a schedule for everyone to get the full experience. As guests dined, birds would sing above their heads!

In the middle of planning, the design team concluded that adding in food service would limit the show’s exposure too much, so it quickly transitioned into an attraction — and Walt Disney’s Enchanted Tiki Room was born! 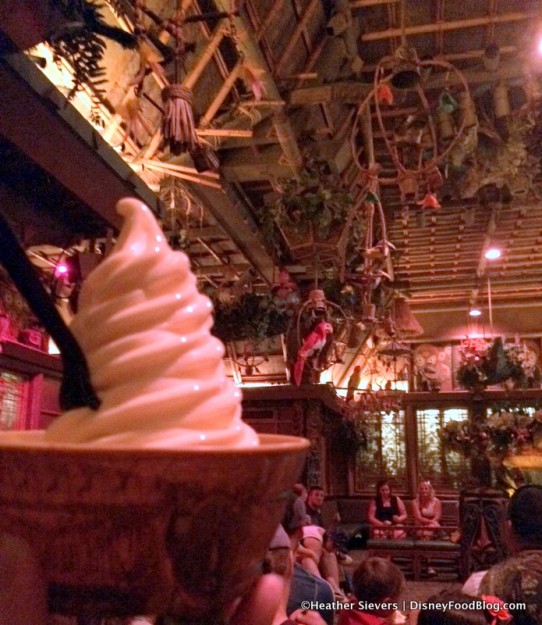 The show closed down in 2011 after a fire and reopened later in the year reversed back to the original version. Walt’s original vision of a luau dinner with a show was finally executed (sans birds singing words and flowers crooning) at the Polynesian Village Resort in Disney World with the Spirit of Aloha Dinner Show.  (The show has now been permanently closed.)

Disneyland used to be home to a counter service location known as Casa de Fritos. Not surprisingly, this spot was famous for shelling out Frito Corn Chips! This restaurant played host to the infamous “Frito Kid.” Frito Kid was a mascot-turned-chip-dispenser complete with rolling eyes, working tongue, and rotating head.

After you slid a nickel into the cash box, he would come to life and call to his partner, Klondike, to send some “golden chips of corn” down a chute that ran the length of a mini-mountain behind Frito Kid. Before you knew it, a bag of Frito’s was on its way to you in all its golden glory!

We bid farewell to Frito Kid when the new mascot Frito Bandito took over as the face of the brand. The Frito Bandito never made it into the parks, so Frito Kid is still #1 in our hearts! This display was super unique and definitely a memorable piece of Disneyland history.

But Fritos weren’t the only big draw at Casa de Fritos. Ready to have your mind blown? Disneyland. Invented. DORITOS. (Yes, we all owe Disneyland a collective “thank you!”) Early in Disneyland’s history, from the actual trash, they invented what we know today as Doritos.

Rumor has it that the staff was throwing away stale tortillas from a local vendor, Alex’s Foods. When the salesman spotted some in the trash, he suggested to the chef that they turn the stale tortillas into chips by frying them up. They began selling bags to guests and it was a quick hit! The snack was wildly popular, leading a Frito-Lay marketing executive to work to commercialize the product into the Doritos we know today!

Disney’s Contemporary Resort opened in 1971 with the Top of the World Restaurant nestled on the 15th floor.

The restaurant received a makeover in 1995 and was re-named the California Grill we know of today!

Chicken of the Sea Pirate Ship

A Peter Pan-themed restaurant on a real pirate ship?? Sign us up! Back in 1955, Disneyland opened the Chicken of the Sea Pirate Ship and Restaurant in Fantasyland.

You could eat your meal by the waterfall at Skull Rock Cove or explore the ship — and maybe even run into Captain Hook! Chicken of the Sea sponsored the restaurant until it was transformed into Captain Hook’s Galley in 1969.

The ship sailed into the sunset in 1982 when it was removed to make way for New Fantasyland and the Dumbo the Flying Elephant attraction. If you are sad you missed the boat on the Chicken of the Sea Pirate Ship, young lost boys and girls can still explore the recreation of the original Disneyland design over at Pirate Galleon in Disneyland Paris!

You know we are always keeping our eyes peeled for new Mickey-shaped snacks — we think those two little ears make any treat even more delicious! But we wouldn’t be able to enjoy any of these snacks without the first, O.G. Mickey-shaped food: pancakes!

These beauties are ICONIC. Featuring blueberry eyes, a cherry nose, and a pineapple smile, they’ve been putting smiles on generations of Disneyland guest’s faces for years. 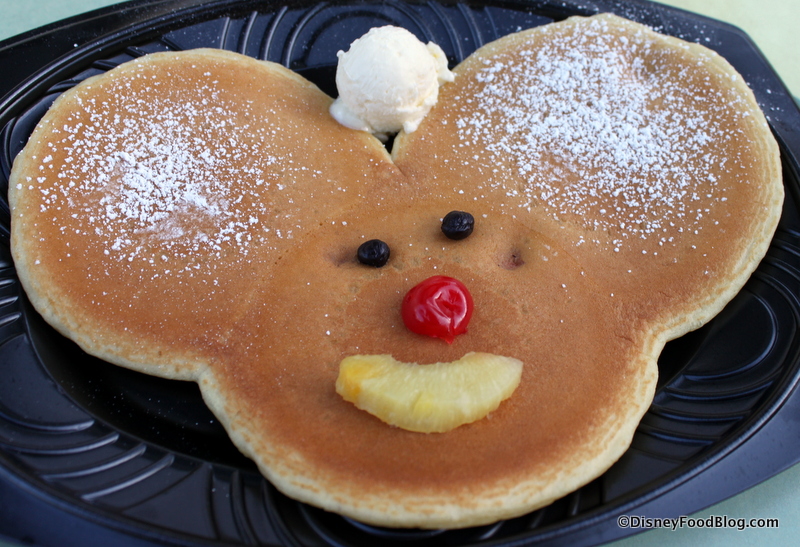 When Disneyland opened in 1955, it was home to Aunt Jemima’s Pancake House, which became Magnolia Tree Terrace in 1970, then received its current name, River Belle Terrace, in 1971.

The chefs at Aunt Jemima’s Pancake House are believed to be the creators of the first Mickey Mouse Pancake!

If you’ve ever been in Epcot’s Mexico pavilion and tried to cut over to Test Track, you have likely been sent on a winding journey past the restrooms, around a building, and along the side of the water.

This seemingly random building (helping you get your steps in) is known as the Odyssey and has been through quite the transitions through the years. It originally started as a counter-service restaurant when Epcot opened but was later transformed into the character show, Mickey’s Rockin’ Celebration, until the restaurant closed in 1994.

The dining space sat idle for years, but was eventually turned into an event space, named the Odyssey Events Pavilion, and has played host to many-a-festival events (such Minnie’s Garden Party)!

Most recently, it was renovated to house the Epcot Experience which gave guests a sneak peek into the future of Epcot’s transformation.

The Epcot International Flower and Garden Festival might as well have been named the Orange Bird festival, because the iconic sipper and slew of Orange Bird related merchandise stole the show and our hearts.

We have seen the precious lil bird represented on SO MUCH merch, but many guests may not know he isn’t just the new face of the Flower and Garden festival!

In 1970, the Florida Citrus Commission partnered with Disney World to sponsor the Sunshine Pavilion, comprised of Tropical Serenade (Enchanted Tiki Room) attraction and Sunshine Tree Terrace, in Disney’s Magic Kingdom. Orange Bird was created as the mascot and was featured in ads for Florida oranges. He could be found perched at the back of the Sunshine Tree Terrace counter-service stand, where guests could enjoy a glass of fresh Florida orange juice or, one of our favorites, the Citrus Swirl.

He even appeared as a walk-around character in Adventureland inside the Magic Kingdom! Disney’s partnership with the Florida Citrus Commission dissolved years later and Orange Bird seemingly disappeared along with it (*Judi Dench narrates* … or so we think…).

Tokyo Disneyland brought Orange Bird back to life in celebrating Orange Day in 2004 and we began seeing him on more merchandise in the United States soon after. In 2012 Orange Bird returned home to his original spot in Sunshine Tree Terrace along with his iconic snack, the Citrus Swirl! Orange Bird has now taken Disney World by storm and we’re totally fine with it.

We always enjoy learning the history behind some of our Disney faves. With every new fact we learn, we love seeing how Disney has been committed to conserving the heart of Walt’s vision even as the parks continue to grow and adapt!

What are some of your favorite Disney food facts? Any we left off? Let us know in the comments!

« News! Disney’s Aulani Resort Is Closing Along With the Other Disney Resorts!
Updated: Become A Disney Animator At Home With These Tutorials! »