Through thorough research, reading article after article, and knowing a thing or two about Disney Parks, we would LIKE to think that we have a crystal ball and can see into the future.

We know, however, that is NOT the case! 🙂 Disney always loves to surprise us and, after all, the only constant at Disney is change! So let’s take a look at the things we were WAY wrong about when it comes to Disney World’s reopening.

How Temperature Screenings Would Work

We anticipated temperature screenings would become a normal part of the reopened theme park experience when Shanghai Disneyland adopted these protocols upon reopening in May. And once it was officially announced that temperature checks would be a part of the Disney Springs reopening, we seemed to have even MORE questions!

What we TOTALLY missed the mark on, however, is how the U.S. temperature screenings would differ from Shanghai! While Shanghai sends guests through temperature screening tents with thermal cameras, so far Disney Springs as well as Universal have used handheld scanners that a person holds up to the Guest’s forehead.

Speaking of those handheld temperature scanners, we were also surprised to see exactly WHO is doing the temperature screenings! While many believed Cast Members would be the ones responsible for checking temperatures, Disney is utilizing AdventHealth to handle all of their screenings.

Learn more about what getting your temperature checked at Disney Springs is like here!

Character Interactions: The Who, The Where, and The When!

When Disney World announced that they would be enhancing their contactless experiences for guests, this meant a temporary suspension of character meet and greets. But we were quickly surprised, however, to see STORMTROOPERS in Disney Springs! We 100% did NOT see that one coming! 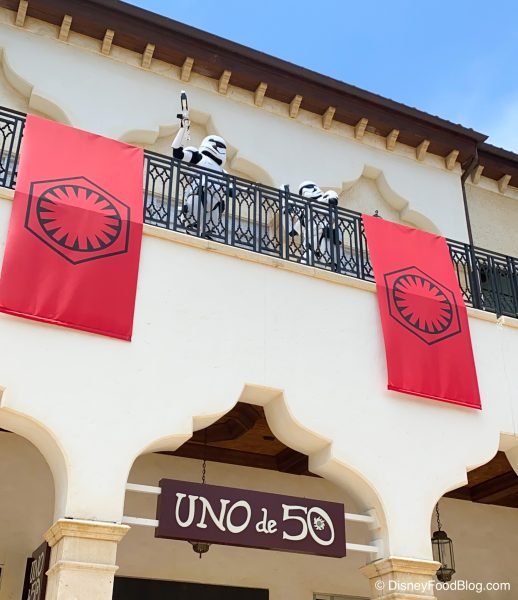 Yes, there were STORMTROOPERS in Disney Springs!

If someone had told us that these guys would be out and about patrolling Disney World’s shopping and dining district from above, we definitely would have laughed! It just goes to show that you never know what Disney has up its sleeves! This could also hint at some of the innovative ways Disney is going to incorporate character experiences in the future. 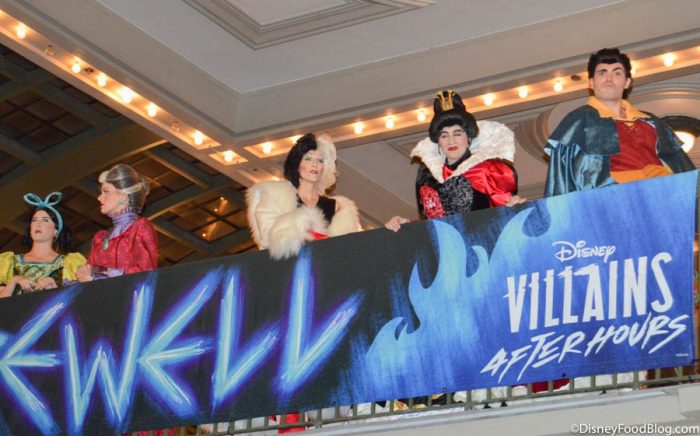 Could this be the temporary future of character interactions at Disney World?

What also took us by surprise was Disney’s decision to cancel character dining when the parks reopen. We saw Shanghai and Hong Kong Disneyland reintroduce characters into the dining experience relatively early in their reopening, implying that Disney would consider a work-around for their domestic parks, too.

But as of right now, that doesn’t seem to be the case. The only character meal option, which will be modified, will take place at Topolino’s Terrace — Flavors of the Riviera at Disney’s Riviera Resort.

Which Disney Merchandise Items are Being Sold (and NOT sold!)

When we first visited Disney Springs on May 20, only a select amount of third-party retailers and restaurants were open. It would be a full week before Disney owned-and-operated-stores, like World of Disney would reopen. But we were shocked to see some Disney Parks merchandise find their way to Disney Springs on day one! It appears this was short-lived though. Disney stated limited-edition merch won’t be released in-store for the time being going forward. 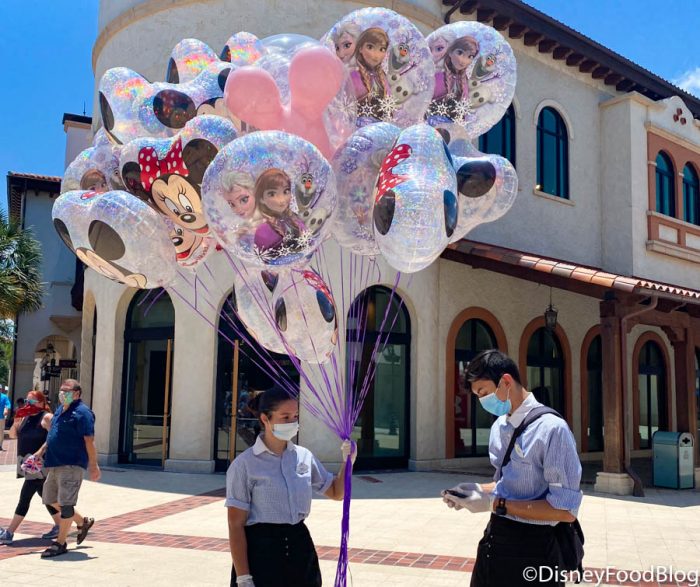 Oh, and we totally did NOT predict we would see Disney World balloons being sold at Disney Springs, especially before any Disney retailers opened!

On the flip side, there was one MAJOR merchandise item that we talked about well before the stores opened: MASKS! 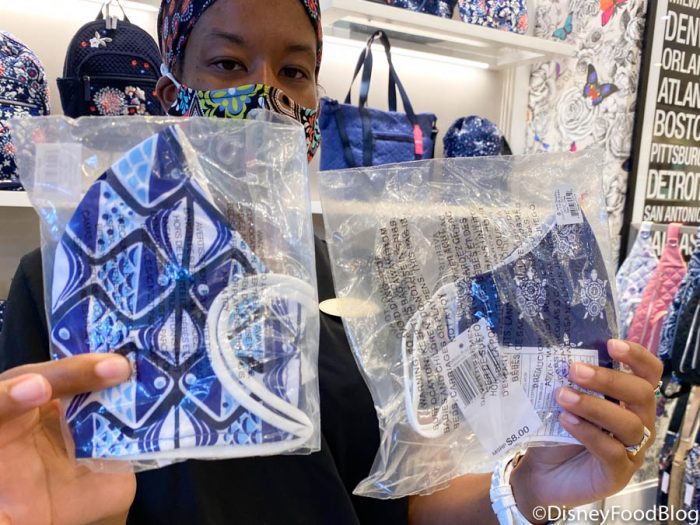 While some third-party retailers like Vera Bradley were selling face masks on day one, Disney branded face masks are still nowhere to be found! Despite the fact that shopDisney is taking preorders for character-themed masks, we debated on whether or not we would see them being sold in person. We weren’t even sure if Disney would be handing masks out for free! 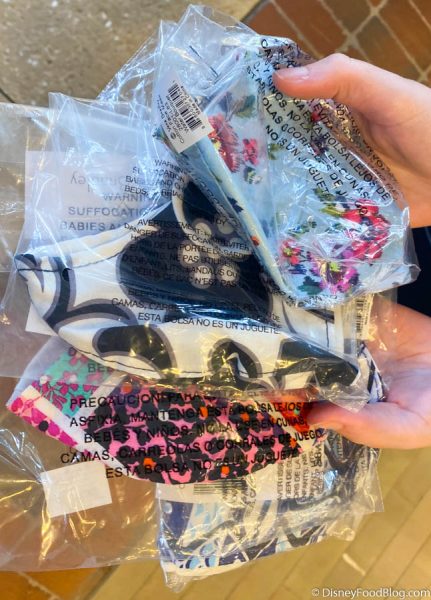 The face mask conundrum is certainly a hot button topic for discussion and one that probably won’t be going away anytime soon! As the theme parks reopen, it’ll be interesting to see if Disney starts selling face masks, like we’ve seen at Universal Orlando.

See what wearing a face mask is like at Disney Springs here!

Part of the new Guest experience at Disney World will be enhanced contactless experiences. With this in mind, we were surprised to see that Disney is still allowing refillable popcorn buckets! 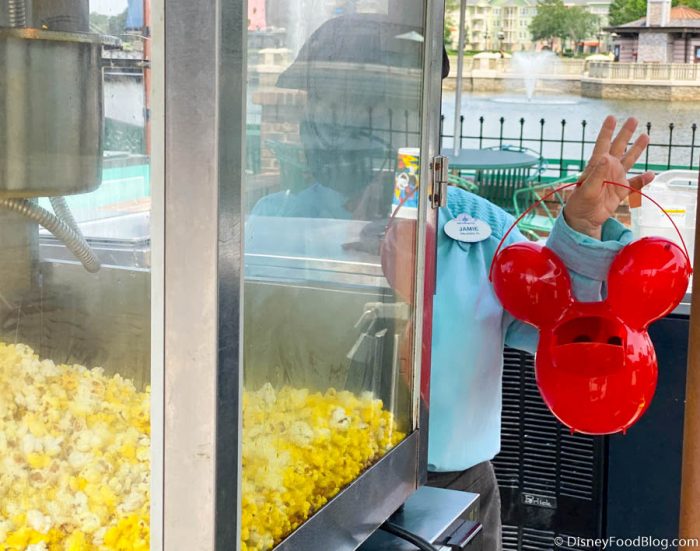 Cast Members will touch your popcorn bucket as little as is necessary, and the handle is wiped before it is given back to you! 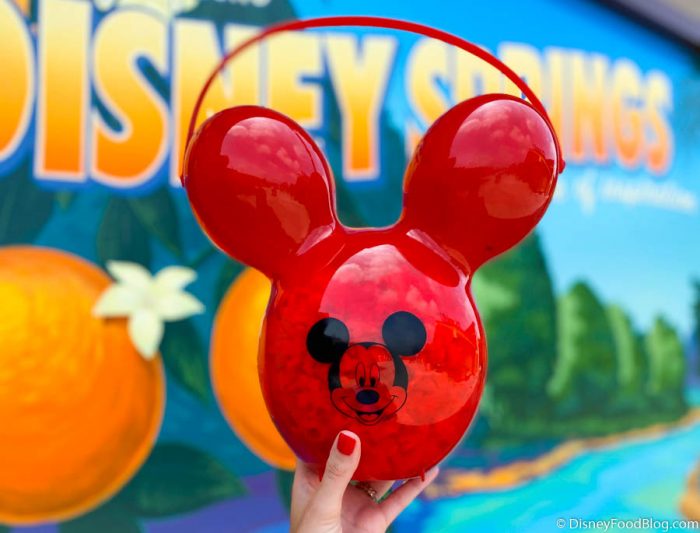 We’ll have to wait and see if this policy carries over to the theme parks, but this was a pleasant surprise for us in the meantime!

How Drink Refills Would Work

We have been predicting some sort of change coming down the pike when it comes to Disney’s refillable drink policies. We could see this affecting both the refillable mugs folks acquire when they’re on the Disney Dining Plan (which has also been canceled for the time being), but also the drinks we all purchase at counter service dining locations. 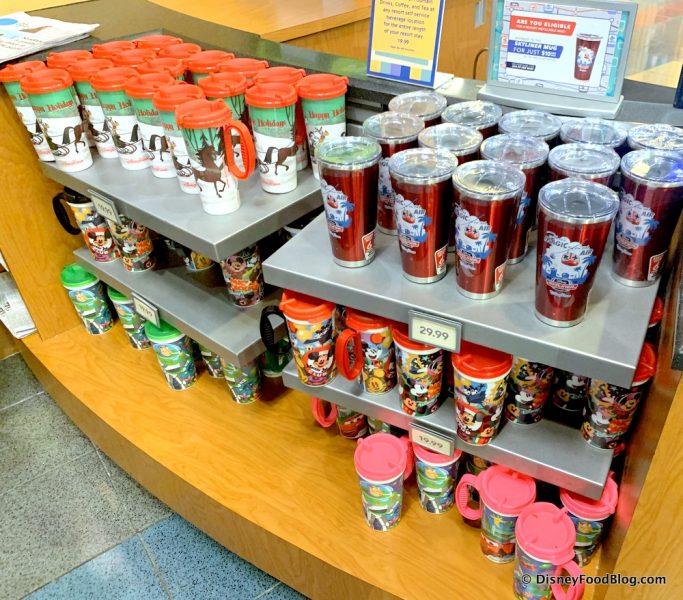 While there were still lots of unknowns then and there are still some unknowns now, we have started to see just how Disney implemented their contactless experience when it comes to refillable drinks. 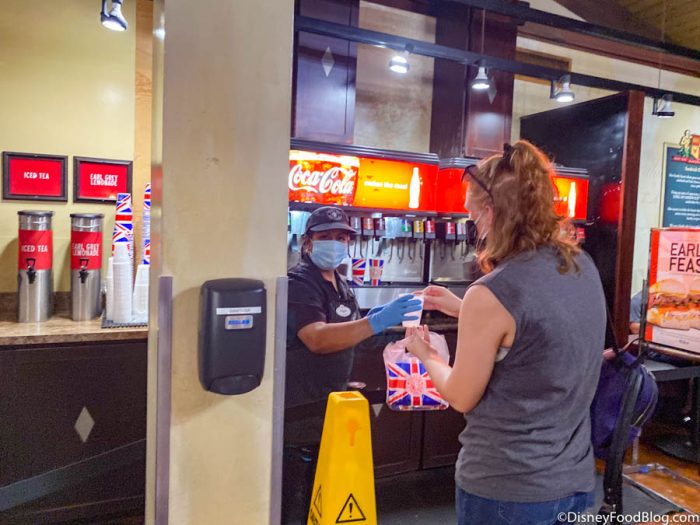 At many of the counter service locations in Disney Springs, guests cannot use the fountain machines to fill their cups. That is all handled by employees who will fill drinks for guests, often roped off near the drink stations. At Starbucks, they are not accepting refillable mugs at this time, which seems to be the protocol for their locations nationwide.

See what other dining measures we have experienced so far at Disney Springs!

We’ve learned over the past couple of months that Disney can definitely take us by surprise! While we can predict, analyze, and hypothesize all day long, ultimately we have to wait and see what Disney does themselves before we know the full picture!

Until then, however, it’s an interesting challenge to analyze what COULD happen, especially when there’s lots of research involved! Keep checking back in with us at DFB in the weeks to come, because we’ll have even MORE information to help you prepare for Disney World’s reopening.

What new protocols or measurements have YOU been the most surprised about? Let us know in the comments!

« DFB Video: The BEST Rooms in Disney World Hotels, And How to Get Them!
News! September’s Disneyland Paris Run Weekend Has Been Postponed Until 2021 »