We’re off to Paradise Falls with all of our new Up merchandise! 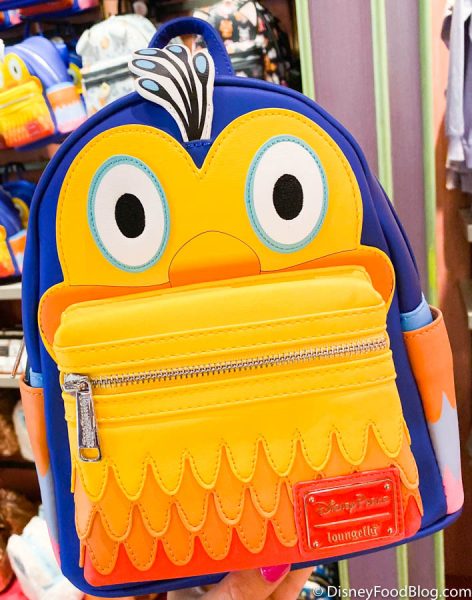 Kevin has definitely been in the spotlight with a new backpack and even a new sweater. But now we’ve found a TON of NEW merchandise inspired by Up with more of our favorite characters and we are ready to get exploring!

We have just met this shirt, and we love it! Check out this awesome Dug & Balloons Woven Button-Up, which is a BoxLunch Exclusive! 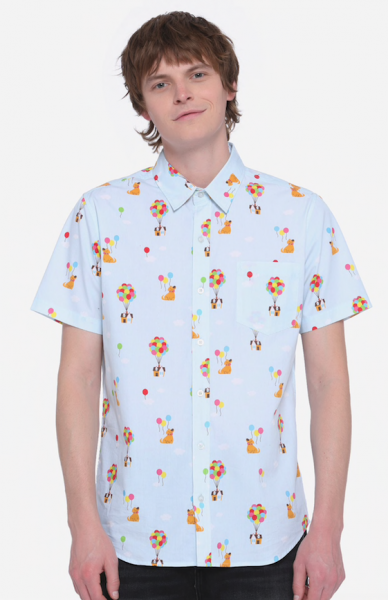 We love all of the pops of color on this shirt from the balloons, but most especially we love Dug’s goodest boy face! 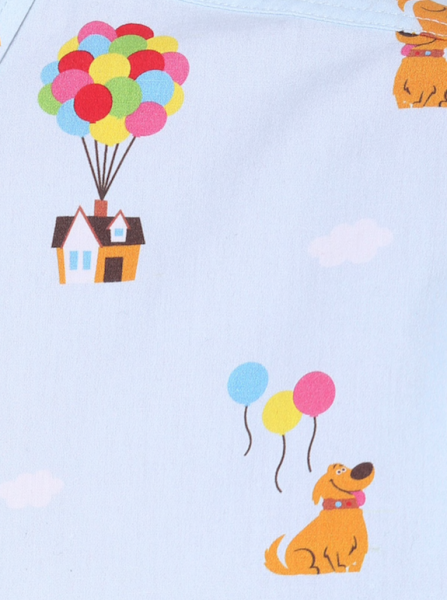 This shirt was actually on sale on the BoxLunch website for $35.92 (regular price: $44.90). When we checked today, this shirt was only available in extra-small, so if it’s a must-buy for you, be sure to grab one quickly!

Click here to take home this Dug and Balloons Shirt.

Can’t pick just one favorite character from Up? You don’t have to with this Up Ankle Sock Set. The set comes with socks featuring Dug, Carl’s house with the balloons, Kevin, Russell, and even a “My Adventure Book” design. 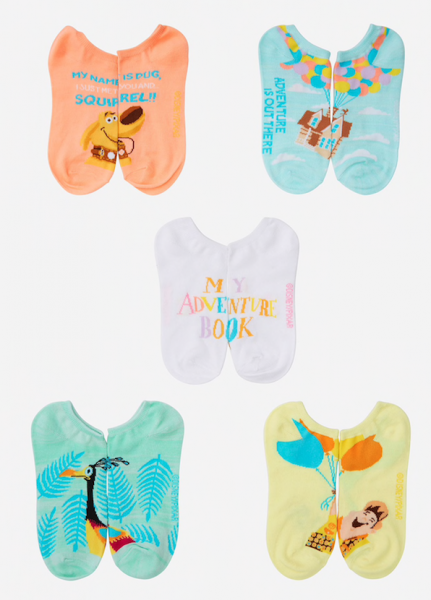 Click here to buy this adorable Up sock set! 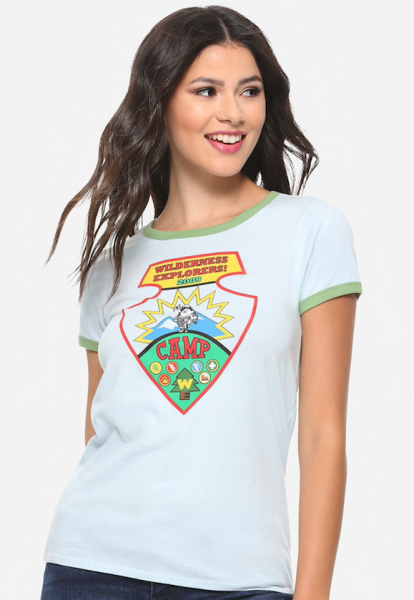 You’ll definitely want to float away with this adorable Adventure is Out There Balloons Women’s T-Shirt. You can follow the trail of balloons to Carl’s house and off to your next adventure! 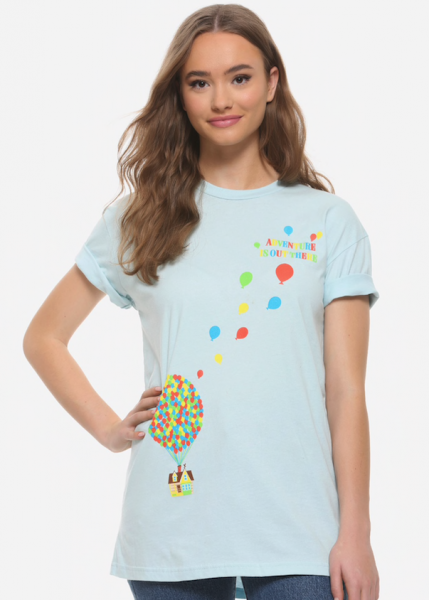 When we last checked, this shirt was only available in a few sizes on BoxLunch, so be sure to grab one fast! It’s on sale for a limited time for $23.12 (regularly $28.90).

Click here to snag this Adventure is Out There Balloons T-Shirt. 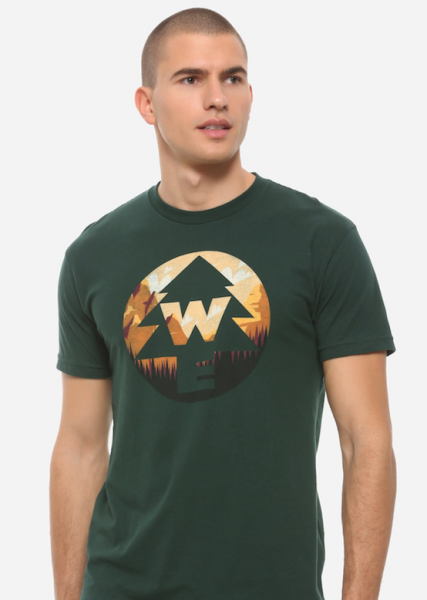 Click here to bring the forest to your wardrobe with this Wilderness Explorers T-Shirt!

Kevin and Russell are ready for some exploring in this Russell & Kevin Mini Loungefly Backpack, which is a BoxLunch Exclusive. Kevin’s colorful features really pop against the blue and tan colors on this bag. 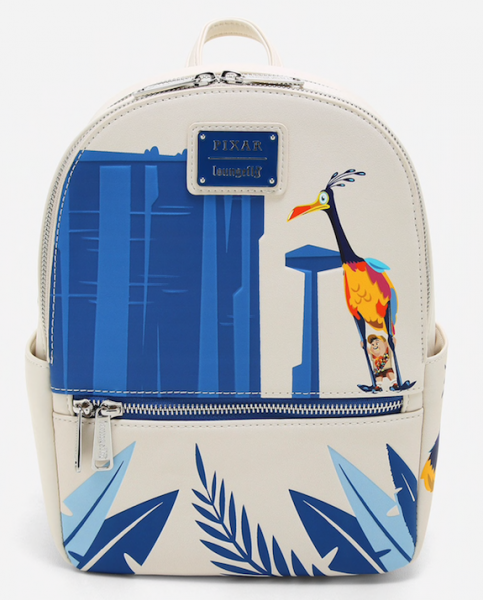 The inside is even more colorful with a fun balloon pattern. 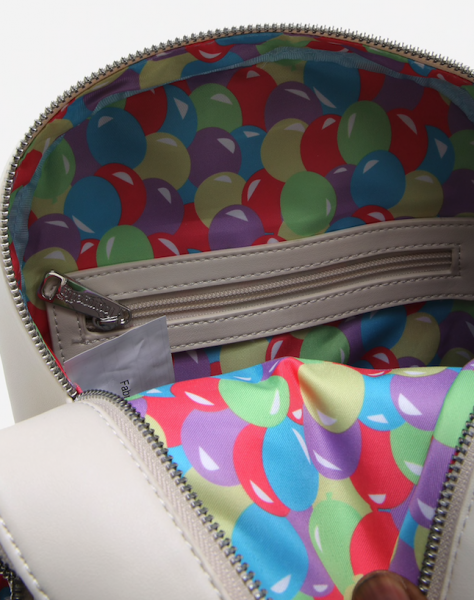 But we definitely think the most adorable part of this bag is the side where you’ll spot a few of Kevin’s babies! So cute! 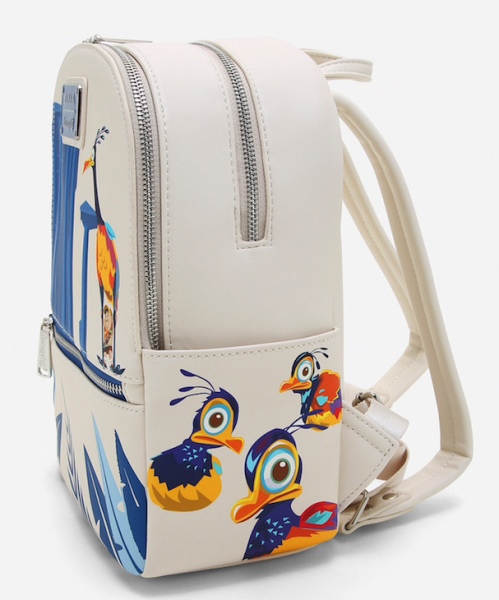 You can pack up all that change for your trip in this adorable BoxLunch Exclusive Loungefly Coin Purse featuring our favorite Wilderness Explorer, Russell! We love seeing all of Russell’s badges, but especially that very special Grape Soda pin. 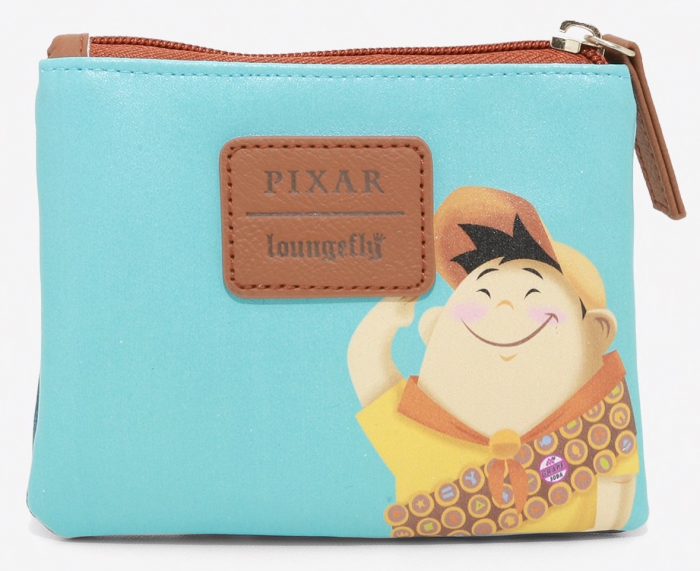 On the other side of the coin purse, you can see a multitude of colorful balloons lifting Carl’s home off to an adventure. 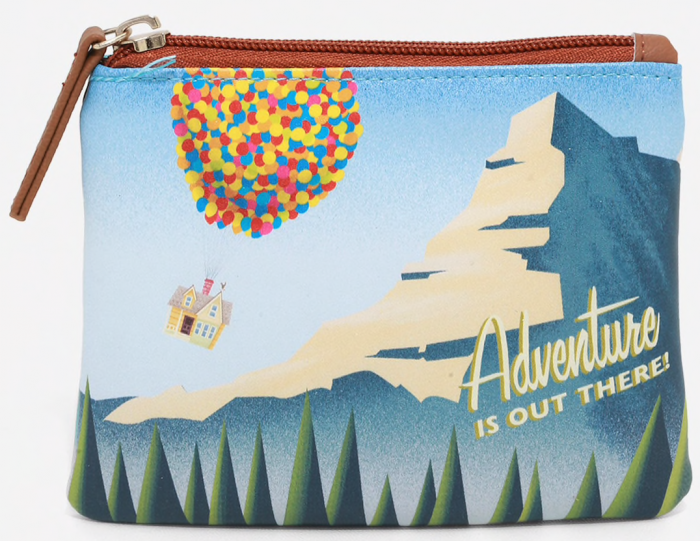 But this coin purse also comes with a huge bonus — a reusable tote bag. 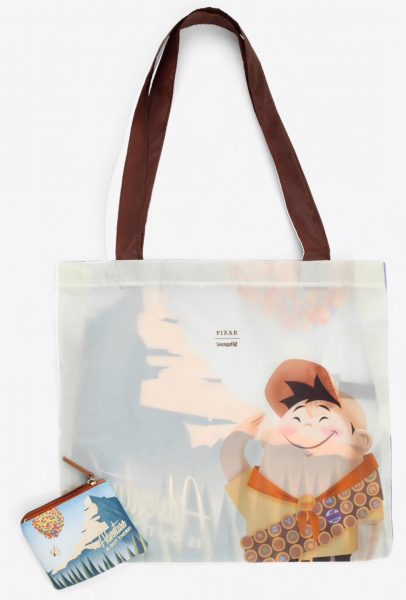 This adorable set was on sale on BoxLunch for $11.92 (regularly priced at $14.90). It’s currently out of stock online, but seemed to be available for in-store pickup in certain stores, so be sure to check online to see if your store has one available.

Click here to check all of the fun merchandise available on BoxLunch.

You’ll need to carry quite a few items with you on your adventure, so you’ll definitely want to check out this Loungefly Holographic Fanny Pack which is a BoxLunch Exclusive. Carl and Ellie are flying up into the clouds with the help of those adorable balloons. 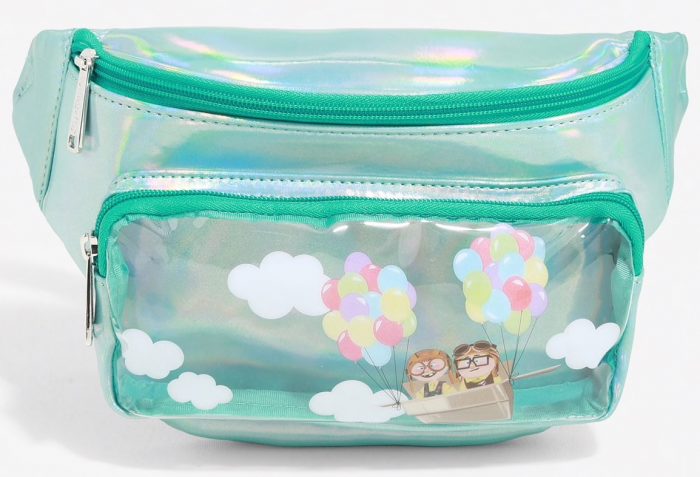 There’s also a matching Holographic Cardholder by Loungefly, which is another BoxLunch Exclusive. 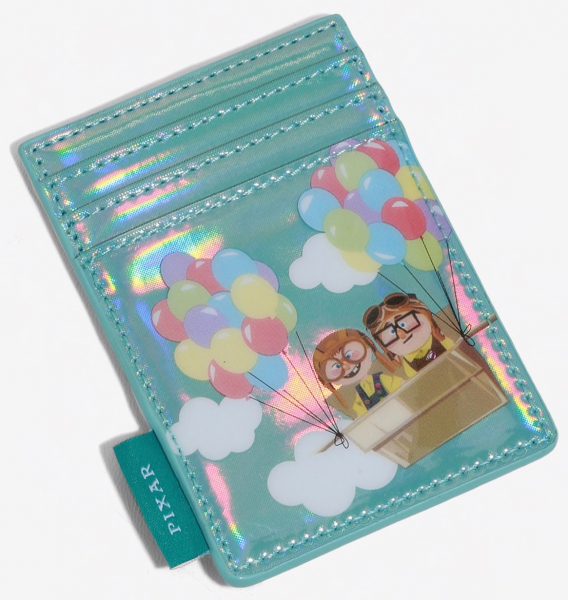 We love how shiny this is! This cardholder was on sale on BoxLunch for $13.52 (regular price $16.90), but is currently out of stock online. It appeared to be available for in-store pickup at certain stores, so be sure to check online to see if your store has one available.

You’ll definitely want to document your travels, so you’ll love this Adventure Book Journal that is modeled after the scrapbook Ellie gives Carl. It’s definitely giving us all the feels. 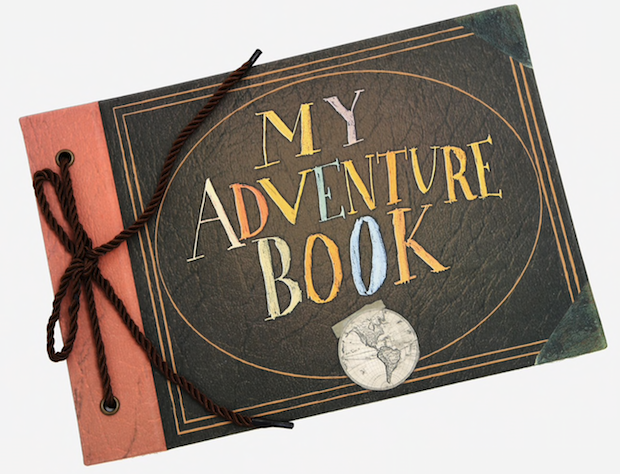 It comes with 80 lined pages for you to fill with all of your favorite stories. We love the leaves and little travel designs included in the pages. 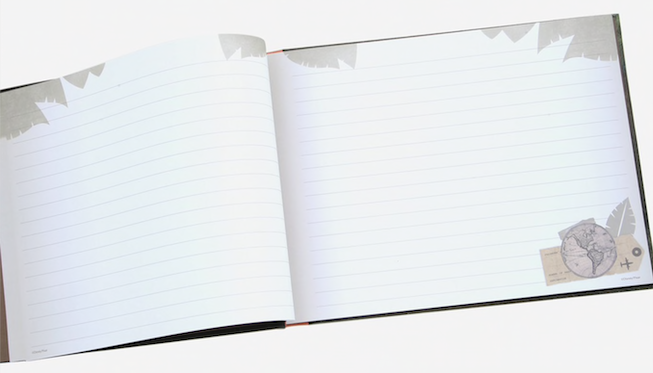 You can snag one of these journals for $13.52 during the BoxLunch sale (regular price $16.90). It is currently on backorder and is expected to ship between August 29th and September 9th.

Click here to start journaling away with this Up Adventure Book Journal!

If you feel the need to go explore the wilderness, then you’ll definitely want this Up Patches Denim Backpack to bring all of your snacks and explorer tools with you! It’s got several patches on it already, but there’s plenty of space for you to add more patches from your adventures. 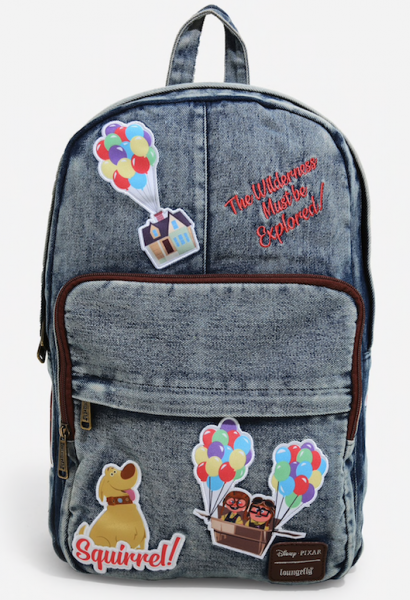 Click here to pack up for your wilderness adventure with this backpack.

Of course, you can’t leave Kevin behind! You can bring Kevin with you everywhere with this Kevin & Russell Legs Enamel Keychain. We love that you can see Russell peeking through Kevin’s legs. 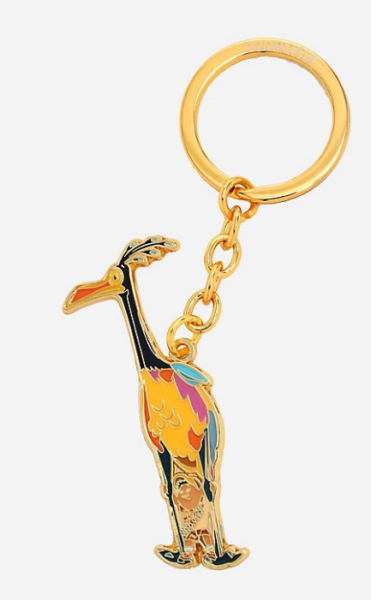 Click here to run away with this Kevin keychain!

Never lose sight of your next adventure with this Paradise Falls Map. With the Grape Soda pin as our compass, and lots of little hidden details (can you spot Kevin in this map?), it’s sure to inspire you to go exploring! 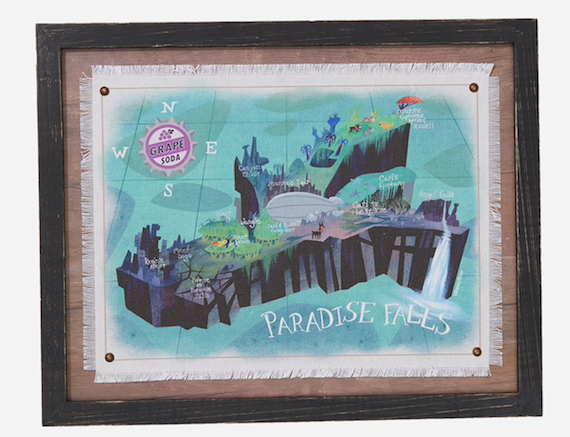 Shake things up a bit with this Snow Globe featuring Carl’s house and his many balloons right in the center. 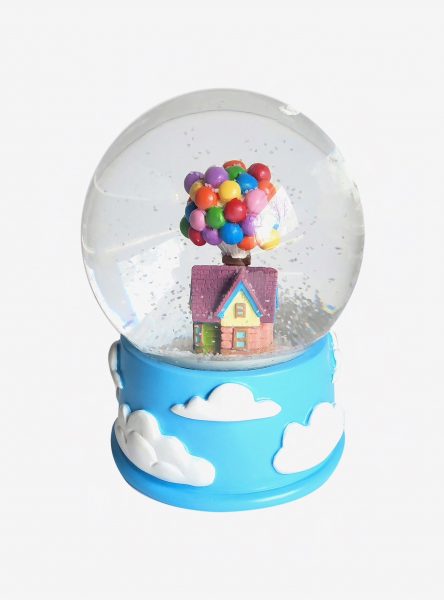 We actually found this snow globe at Hot Topic for $28.90. 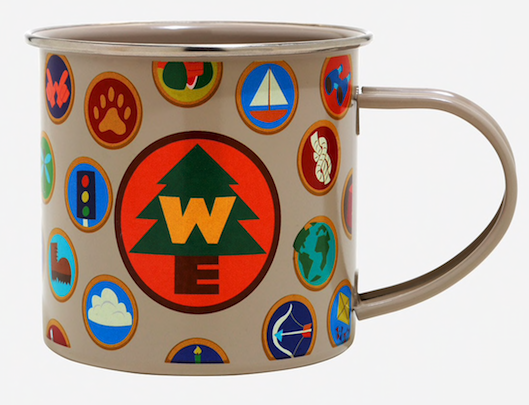 This is another one that’s unavailable online on BoxLunch, but may be available for in-store pickup in certain locations, so be sure to check on the BoxLunch website and see if your store has one available. The mug is on sale for $13.52 (regular price $16.90).

You’ll need to start saving up for your next adventure, and this Paradise Falls Iridescent Coin Bank can definitely help you with that! 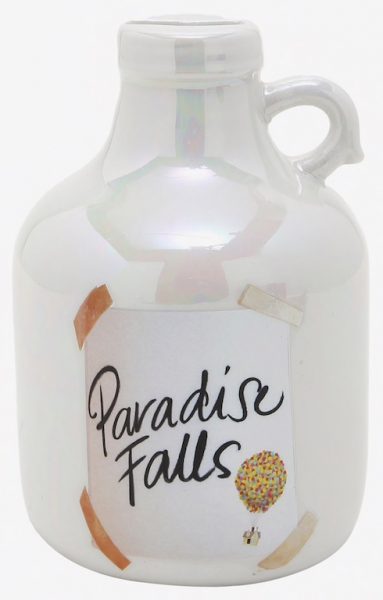 Looks like Up fans have quite the shopping adventure ahead of them. We’ll definitely let you know if we find more exciting Up or Pixar merchandise in the future!

Click here to check out the beautiful NEW Up Minnie ears we found in Disney World!

Which of these new Up items is a must-buy for you? Let us know in the comments!