So it’s no secret that we LOOOOOVVVEEE Bread Pudding. We’re just going to blame ‘Ohana for turning us on to bread pudding in the first place. 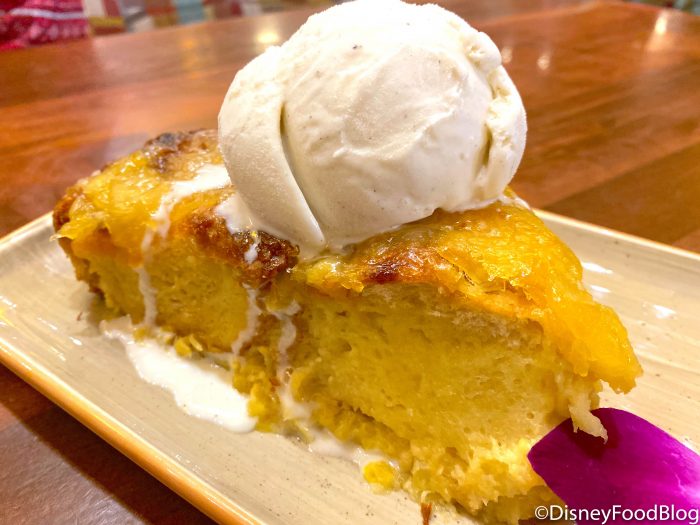 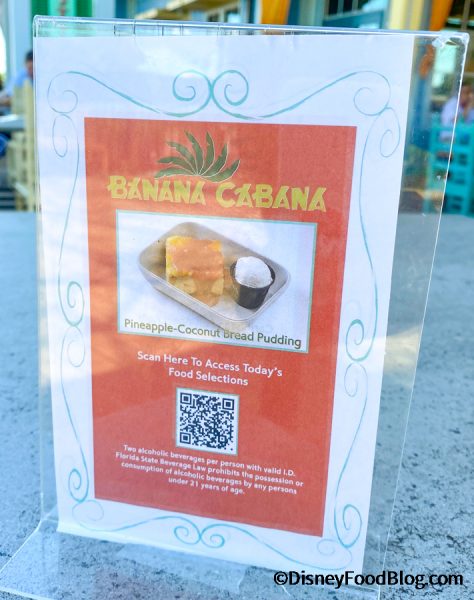 That sounds GREAT, right? But we’ve gotta take a step back and acknowledge that the location of this new treat is just plain weird. Why is such a yummy-sounding bread pudding hiding near a random pool at a Moderate resort? Who even wants to eat bread pudding by the pool?! Honestly, not us. We have QUESTIONS. 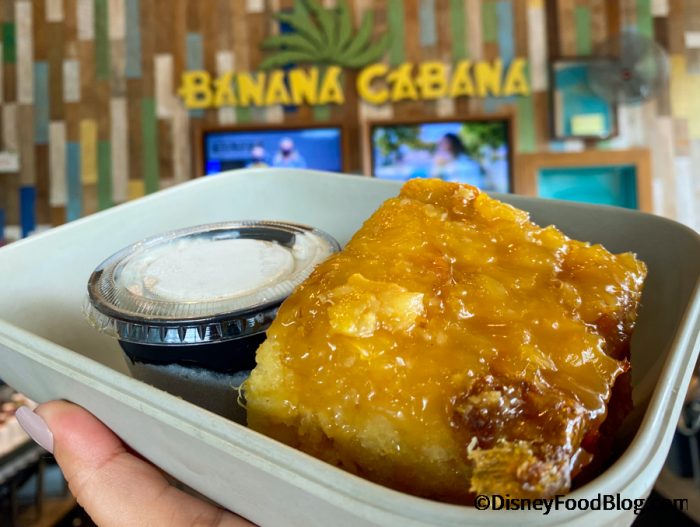 Okay, sure, it’s strange. But we’re gonna push that aside and get tasting! And BOY is this treat good. The caramel sauce is not the gooey kind that drips all over — in this case, it sort of just soaks into the bread pudding and infuses its flavor with the rest of the dessert. There is also a TON of pineapple on top, with pieces of pineapple and coconut baked into the bread pudding. The flavor of this baby is 🔥🔥🔥!!! So yummy! 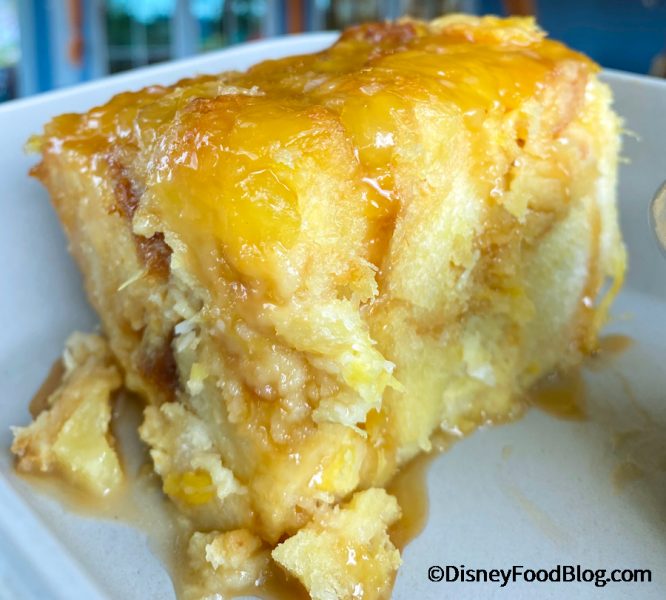 Ooey and gooey and oh, so good.

What’s really cool about this bread pudding, though, is that it’s served with a side of Vanilla Ice Cream. 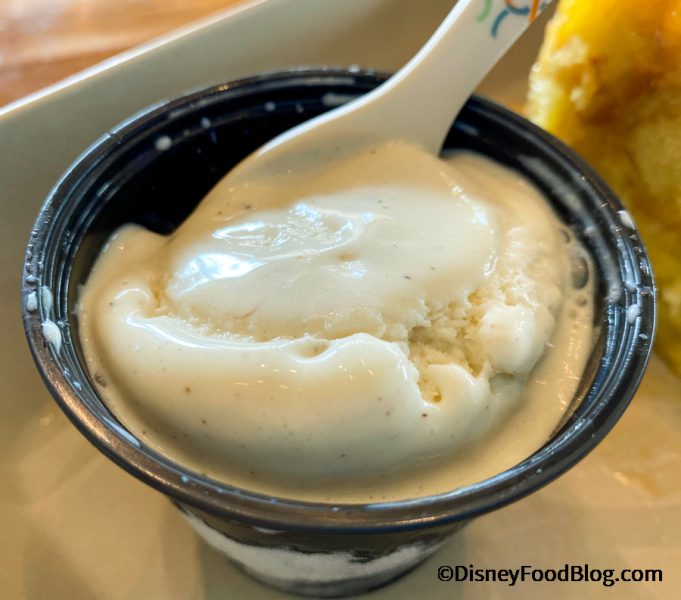 We dolloped that ice cream on top of the bread pudding because that’s what it’s there for!!! A la mode is where it’s at! 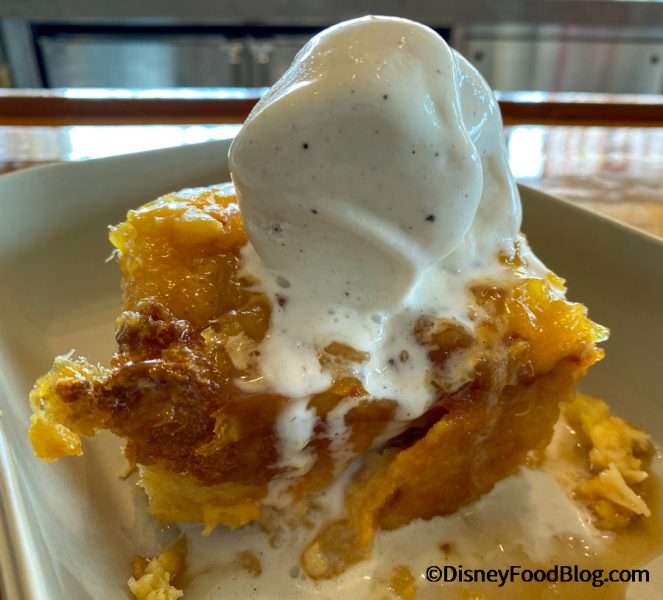 All in all, this is a wonderful tropical-inspired dessert. ‘Ohana’s bread pudding with the drippy caramel sauce is a CLASSIC that we adore, but we like that Disney decided to do something unique with this one. And it worked! 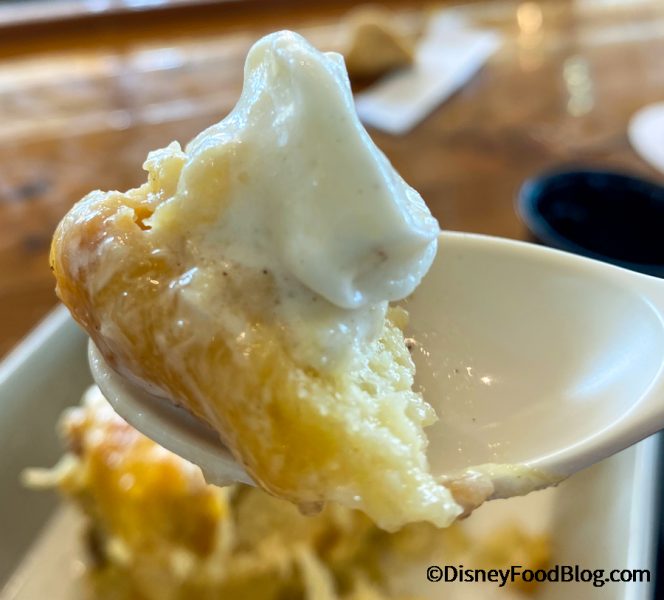 You can’t eat just one bite…

So what else makes this bread pudding so amazing? Well, a former chef from ‘Ohana (you know, the place with the bread pudding we all obsess about) created this recipe!!! So no wonder we loved it!

There’s a pineapple 🍍 coconut 🥥 bread pudding at Caribbean Beach Resort’s Banana Cabana 🏖…and it’s delicious! A former chef at the Poly resort’s ‘Ohana (home of the original pineapple bread pudding) has created this at CBR…and we’re so happy to see it! 👍 pic.twitter.com/CRBIe31QfD

But we’ve gotta ask: WHY is such a tasty treat hiding at a RANDOM pool in Disney World? It deserves so much better than a pool, people. And I have never sat by a pool and thought, man, I could really use some warm bread pudding right now. Still, if you love tropical flavors, it may be worth it to take a trip to Caribbean Beach and grab this snack for $10. And we’ll let you know if we find any other great snacks at Disney World!

Are you a bread pudding fan? What’s your favorite? Let us know in the comments!

« PHOTOS: Another Glimpse of New ‘Moana’ Rooms at Disney’s Polynesian Village Resort
We Never Expected to See This Version of a Disney Princess 😳 »