There have been SO many reopenings lately in Disney World! 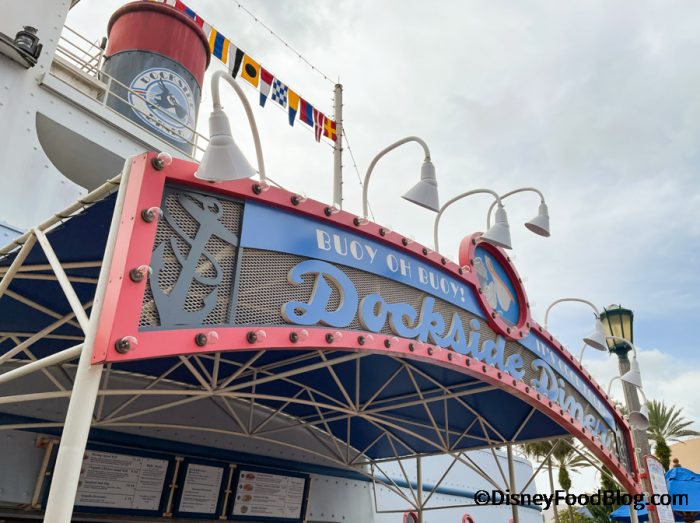 Dockside Diner is back!

But today, we’re heading over to Disney’s Hollywood Studios for the reopening of Dockside Diner! In the past, this has been a great spot to pick up some quick-service food like hotdogs and milkshakes. So how has it changed? 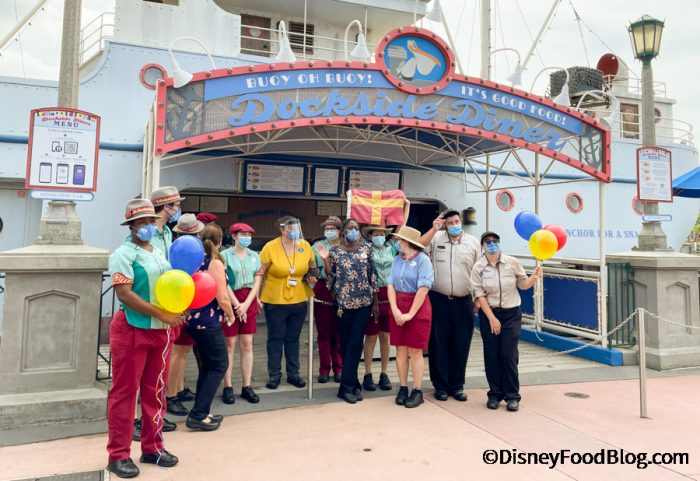 When we arrived, Cast Members were there to greet us and to celebrate the grand reopening!

This is a counter-service restaurant, but there is plenty of outdoor seating nearby! 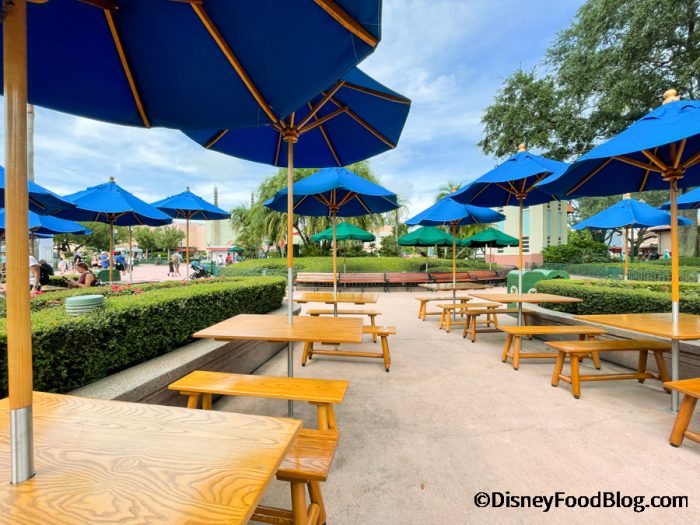 We especially appreciate the umbrellas over the tables — it’s nice to eat in the shade! 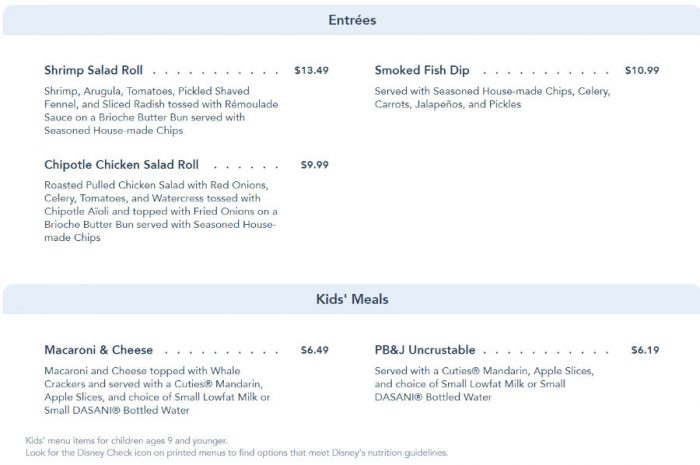 For dessert, you’ve got the Seaside Brownie, which is a Chocolate Brownie topped with White Chocolate Ganache and Seaside Garnish. A variety of cold beverages are also available. 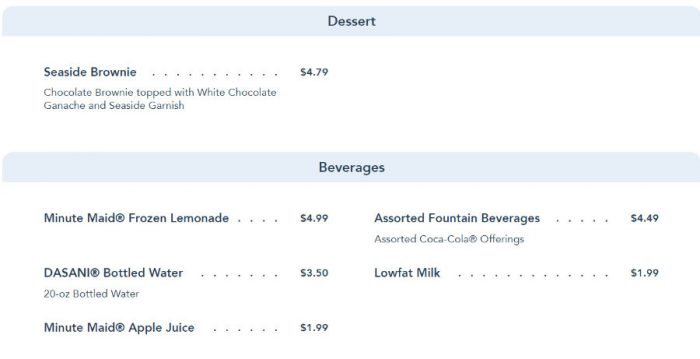 There is also a selection of Hot Beverages, along with a few Milkshakes.

And for something with a bit more kick, check out the boozy milkshakes, cocktails, and beers.

This restaurant also has mobile order, which is SO convenient! So we placed our order on the My Disney Experience app and picked it up when it was ready! 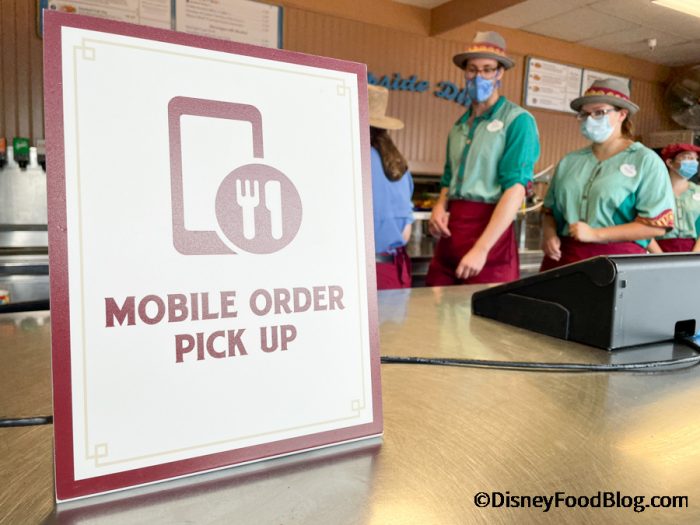 And…well…WE ORDERED almost ALL the food, and a few drinks! 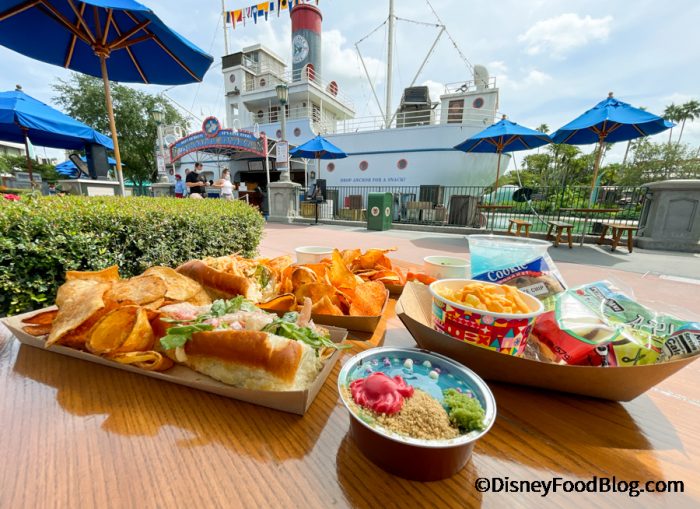 So how was it? We started with a Chocolate Shake for $5.49. Can’t go wrong with a classic, can you? And this was just a perfect chocolate milkshake — nothing fancy, but it tasted great. It DID melt quickly, but it’s hot out, and well, that’s what happens. 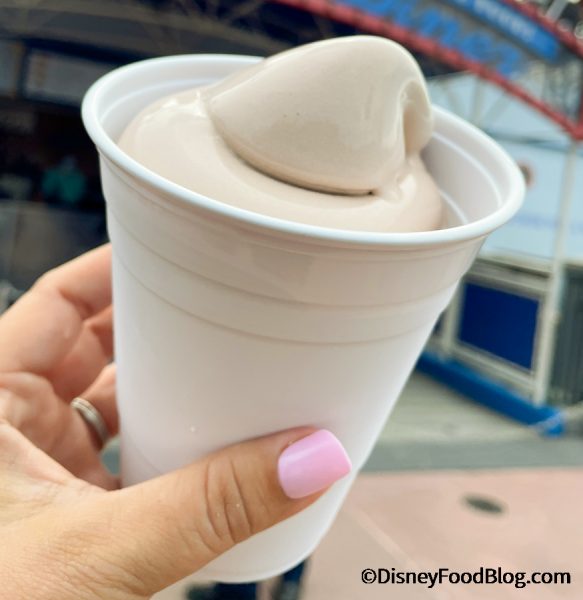 Getting our shake on

But we also wanted to dive into something a little boozy, so we ordered up the Blue Sea Margarita, which is made with Patrón Silver Tequila, Bols Blue Curacao, and Sweet-and-Sour for $16. Like the milkshake, this was a pretty standard margarita, although the Blue Curacao gave it a little extra sweetness. Very tasty! 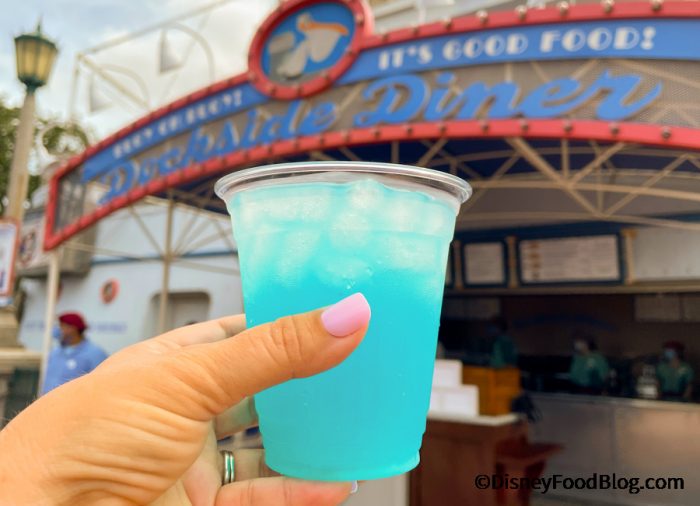 We started with the Smoked Fish Dip for $10.99, which is made with Mahi Mahi and Whitefish. It’s served with Seasoned House-made Chips, Celery, Carrots, Jalapeños, and Pickles. We’re going to say up front this is one of our favorite things we tried here! It was warm, cheesy (!!!), and creamy. 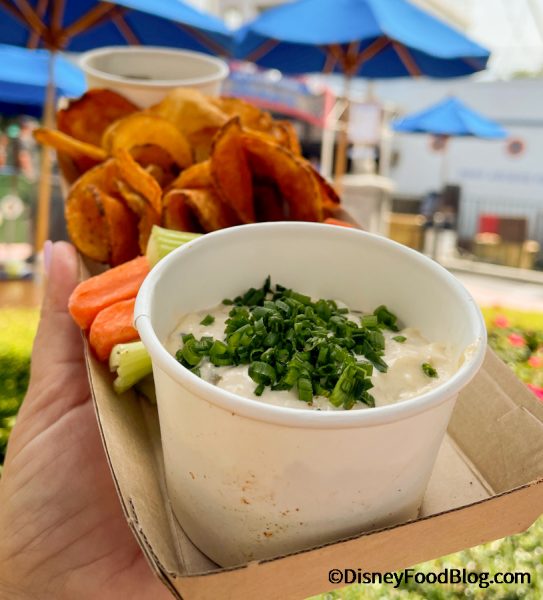 The dip was also blended very well — there weren’t big chunks of fish in it. And get this — it didn’t taste fishy at all, because sometimes fish-based dishes can be overwhelming, but that wasn’t the case here. The chives on top were also a nice touch. 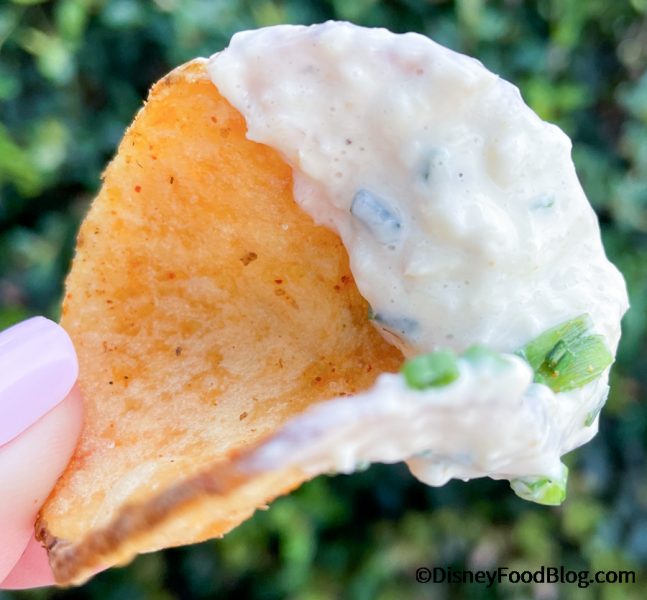 Then we dug into the Shrimp Salad Roll for $13.49 — it’s Shrimp, Arugula, Tomatoes, Pickled Shaved Fennel, and Sliced Radish tossed with Rémoulade Sauce on a Brioche Butter Bun served with Seasoned House-made Chips. This was also pretty good and it had a total of seven pieces of shrimp (way more than we expected). 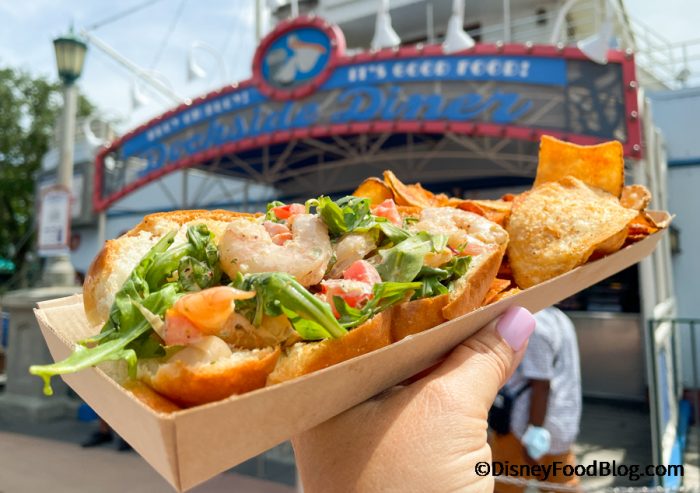 Look at the shrimp on that baby!

There was a small kick to the flavor, but it wasn’t super spicy (we got an Old Bay seasoning kinda’ vibe from it). The Brioche Bun was delicious, but if we had one complaint, it was that we would’ve liked more lettuce on the sandwich as a whole. 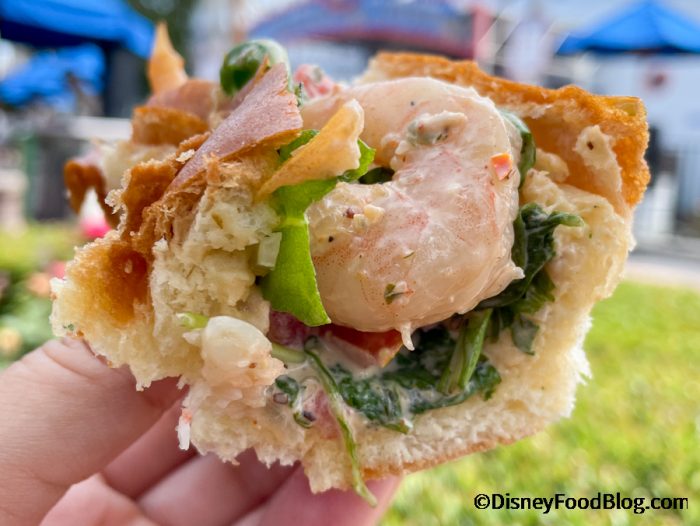 Next up was the Chipotle Chicken Salad Roll for $9.99. It’s made with Roasted Pulled Chicken Salad with Red Onions, Celery, Tomatoes, and Watercress tossed with Chipotle Aïoli and topped with Fried Onions on a Brioche Butter Bun served with Seasoned House-made Chips. And this was the sandwich that stole the show for us! 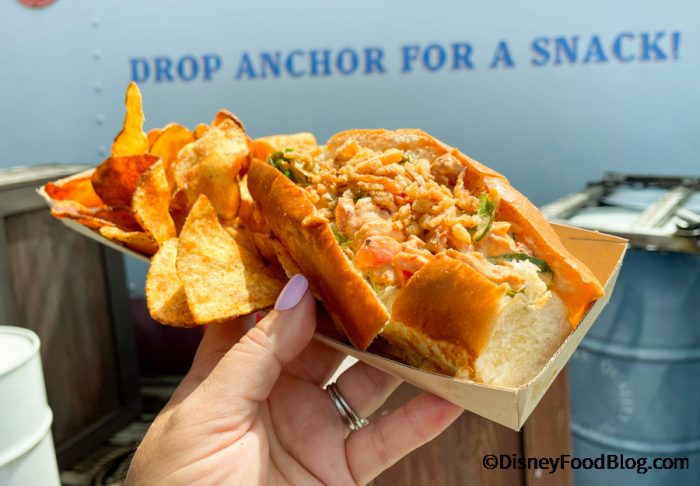 This sandwich had even more of a kick, thanks to the chicken salad being made with a LOT of Chipotle Aïoli. But again, we would’ve loved to have had more lettuce here. The Fried Onions on top also added a bit of extra flavor, as well as a nice crunch with each bite. 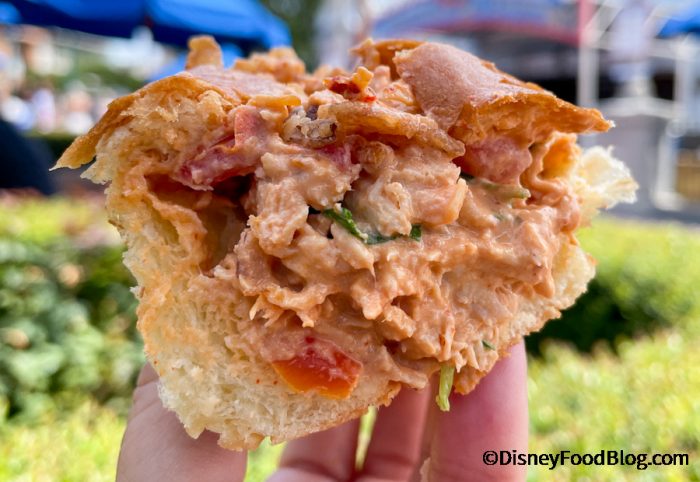 We also made sure to check out the Kids’ Menu offerings, so got the Macaroni & Cheese for $6.49 (you know us — we’ll use ANY excuse to eat Disney mac ‘n’ cheese). It’s topped with Whale Crackers and served with a Cuties Mandarin, Apple Slices, and choice of Small Lowfat Milk or Small DASANI Bottled Water.  It’s a typical mac ‘n’ cheese, but the crackers on top were soggy. Kids are going to love this, though. It’s tasty AND fun. 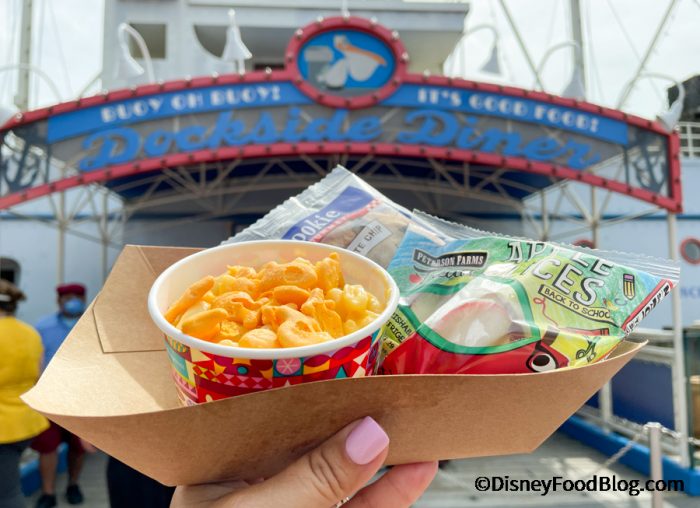 And of course, we couldn’t leave without having some dessert. The Seaside Brownie for $4.79 (which we’ve had before) is a Chocolate Brownie topped with White Chocolate Ganache and Seaside Garnish. This version is a lot more colorful than its predecessor! Here’s what it used to look like: 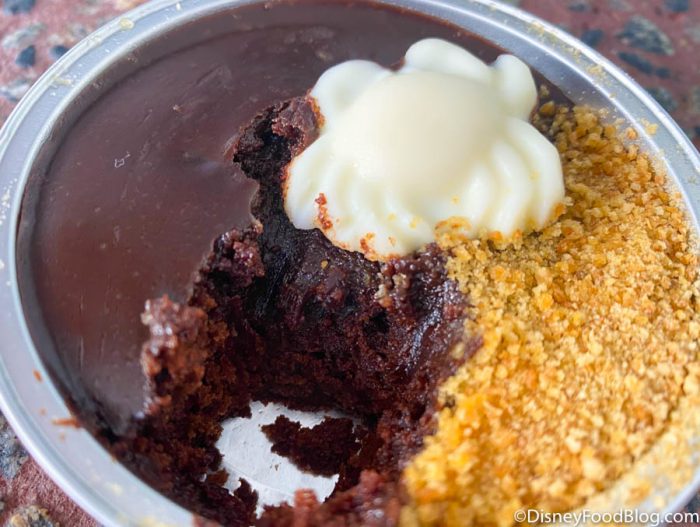 Here’s what it looks like now! What a difference, right? This version is way more Instagrammable! 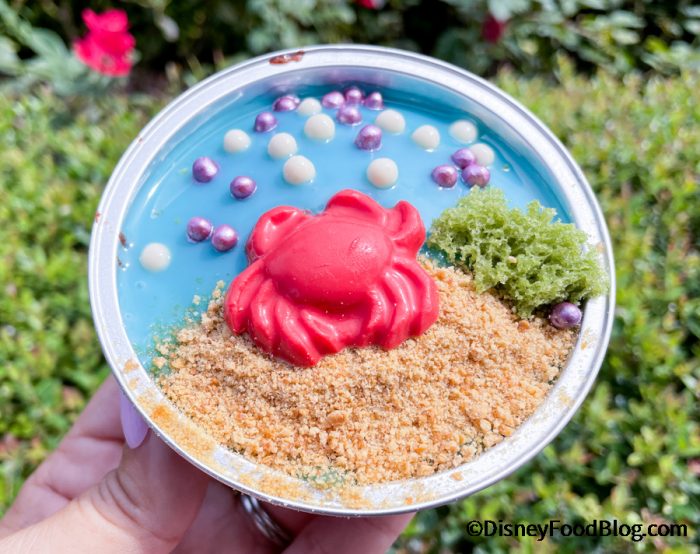 But like its previous version, it’s still a super tasty fudgy brownie. But we came across another hot Florida day problem — the ganachie icing on top melted SO fast and we even accidently dripped some on us. Oops. We think maybe a buttercream frosting might be a better topping? But the White Chocolate Crab is so cute and we liked the crunch of the pearls. 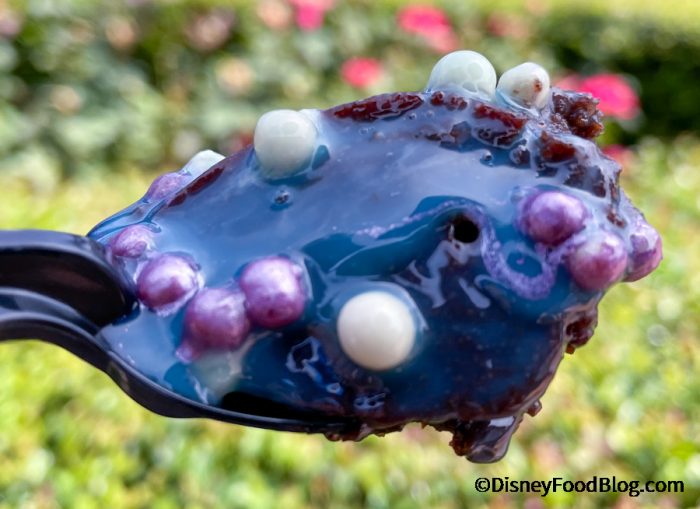 What do you think of Dockside Diner’s menu right now? Let us know in the comments!

« How to Maximize Your Time at BOO Bash in Disney World
Guess How Many Rides Had An Average Wait Over An Hour Last Week — You’ll Be Surprised! »