We’ve already eaten our way around Disney California Adventure at the Festival of Holidays (which lasts through January 8th, 2023), but now we’re on the hunt for even MORE holiday goodies! 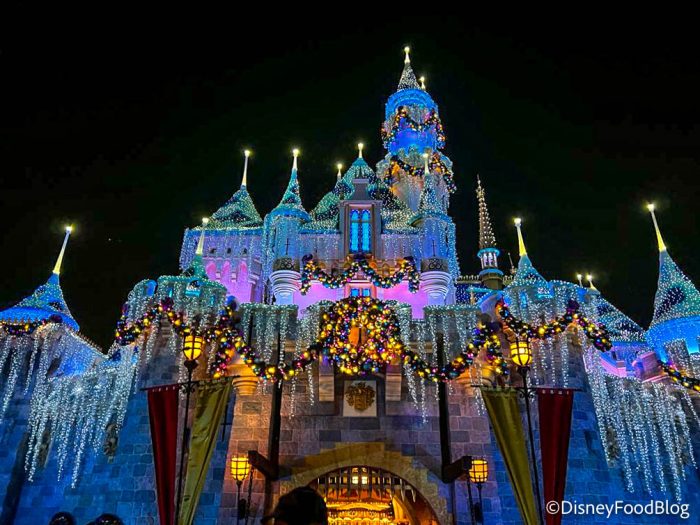 There’s a very tasty ice cream sandwich at Gibson Girl Ice Cream Parlor, and the Mickey-shaped Maple Beignets at the Mint Julep Bar are not to be missed. Come along with us now to try a full holiday meal on Main Street, U.S.A.!

We’re visiting the Jolly Holiday Bakery Cafe on Main Street, U.S.A., in Disneyland Park to try some seasonal eats. This Mary Poppins-themed spot is the home of our beloved Matterhorn Macaroon, but that’s not what we’re after today. 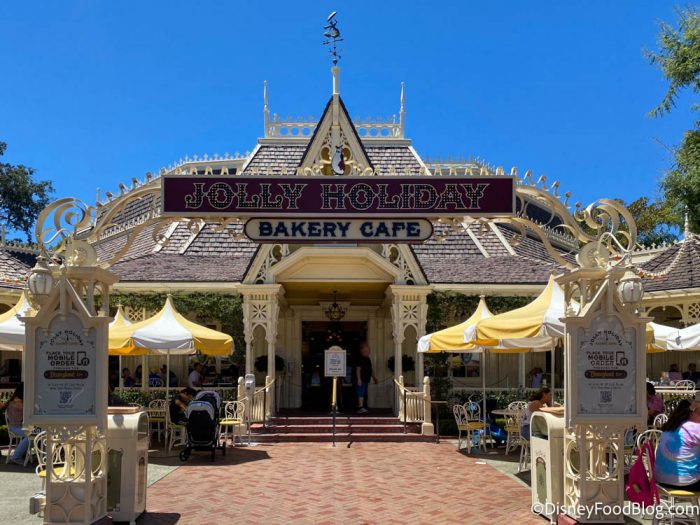 We’ve had some epic treats at Jolly Holiday!

At the Jolly Holiday Cafe, you can find lots of pastries, treats, breakfast items, and hearty sandwiches. It does have Mobile Order available, so you can use that to skip the line.

Today, we got a full holiday meal, starting with the Turkey Pot Pie Soup for $6.99. The soup was served with an Olive Garden-type breadstick, although this one wasn’t flavored with garlic. The breadstick was pretty good, but it was mostly just a vehicle for the soup. 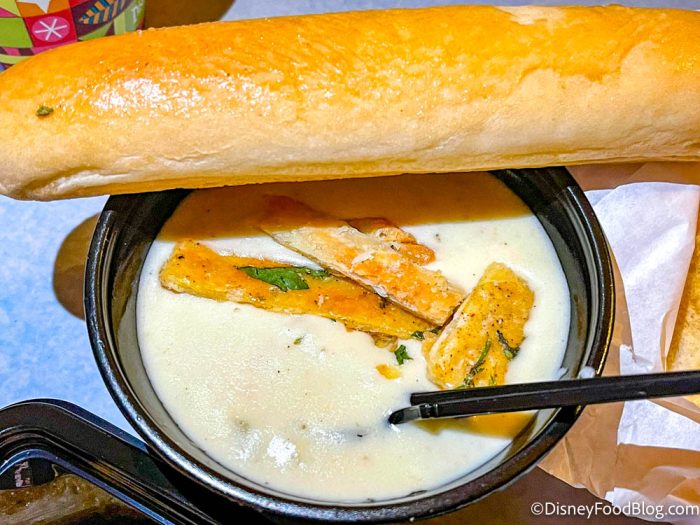 The soup was delicious! It tastes exactly like a turkey pot pie in liquid form, which might not sound super appetizing, but it was very tasty. It’s warm comfort food, which is great for a chilly evening. There are some vegetables inside (like peas and carrots), and you’ll also find pieces of turkey. And it’s topped with little pie crust strips. 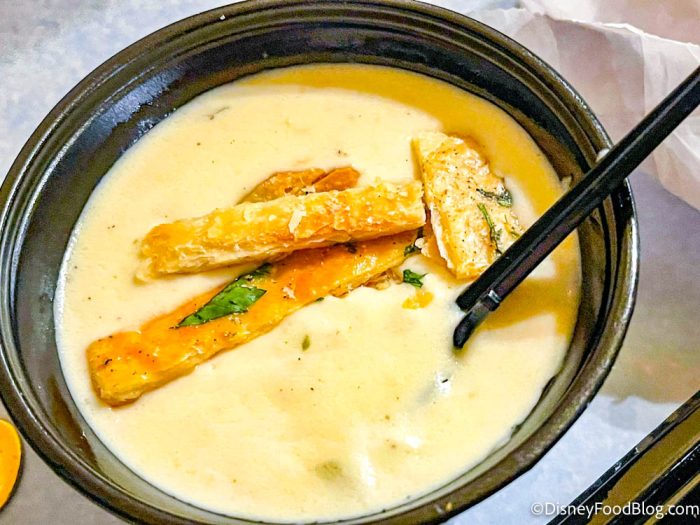 We’d definitely get this soup again! We even used it as a dipping sauce for our sandwich, which was the Thanks-mas Sandwich for $14.49. This was made with Roasted Turkey, Stuffing, Gravy, and Cranberry Sauce on Rustic Bread, served with House-made Chips. 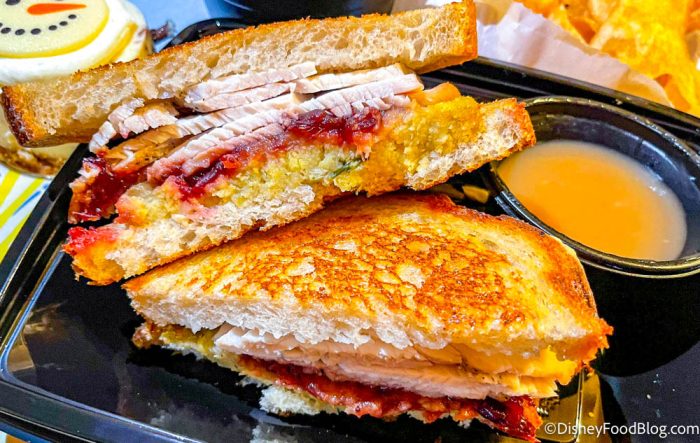 The hearty sandwich tasted exactly like Thanksgiving or Christmas dinner in sandwich form. It reminded us of later on Thanksgiving, hours after everyone’s eaten, when you break out all the leftovers and whip up a quick snack. We loved all the flavors except for the gravy, which was very bland. So we used the soup as a dip instead! 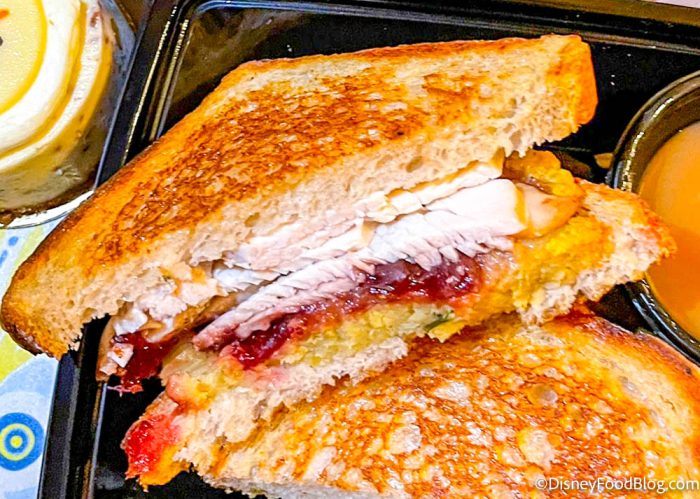 The sandwich is served with a HUGE bag of house-made chips, which are also good dipped in the soup or crumbled on top (can you tell we were big fans of that soup?).

For dessert, we had the Snowman Cinnamon Roll Cheesecake for $6.49. This treat is a Cinnamon Roll-flavored Cheesecake, made with Cream Cheese Icing, Milk Chocolate Nougatine Arms, and Snowman Chocolate Decoration. Note that it DOES contain nuts. 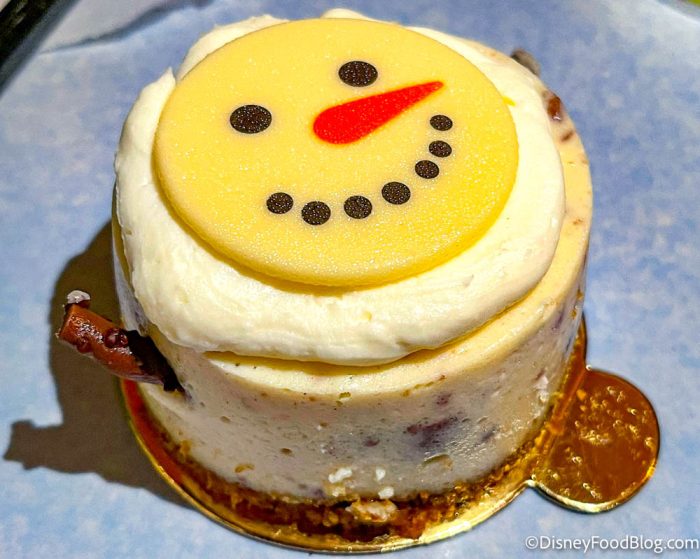 We thought this treat was super cute! It’s served cold, so it might not be the best choice for a cooler day, but all of the flavors were really good. The cheesecake was very creamy, and the graham cracker crust on the bottom was very tasty as well. It didn’t really remind us of a cinnamon roll — we just tasted a hint of cinnamon in the cheesecake. But we enjoyed it! 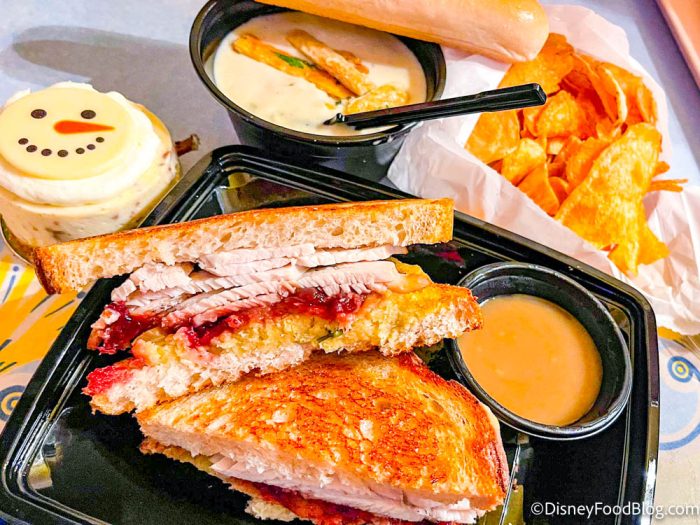 You can get all of these eats at the Jolly Holiday Bakery Cafe now. And if you’re looking for even MORE eats, be sure to check out all of our reviews from the Festival of Holidays. Stay tuned to DFB for more updates on the latest Disney news!

Click here to see photos and reviews of ALL the holiday treats in Disneyland.

Which of the seasonal eats would you get at Jolly Holiday Bakery Cafe? Let us know in the comments.