Abigail Disney, the granddaughter of the late Roy Disney, has been critical of The Walt Disney Company, even before the events surrounding our current situation began unfolding.

And while she’s already been openly expressing her opinions in regards to some of the tough decisions Disney has been forced to make, she posted a long thread of criticism on Twitter yesterday which has a LOT of people talking.

You can check out the heiress’s Twitter account @abigaildisney to see what she’s been writing about the Walt Disney Company (and it looks like she’s also composing her thoughts currently for another lengthy thread). Agree with what she has to say or not, the message she’s trying to send is pretty clear: she doesn’t think Disney’s top-paid executives should still be getting their bonuses while thousands of non-essential Cast Members and employees have been short-term furloughed.

A few weeks ago, we told you many of Disney’s highest-ranking executives would be taking pay cuts including current CEO Bob Chapek and former CEO Bob Iger. But later, we also clarified these deductions would only be impacting their base salaries — not their entire compensation packages. Abigail Disney claimed on Twitter, “[a] Salary is a drop in the bucket to these guys,” “the real payday is in the rest of the package.” 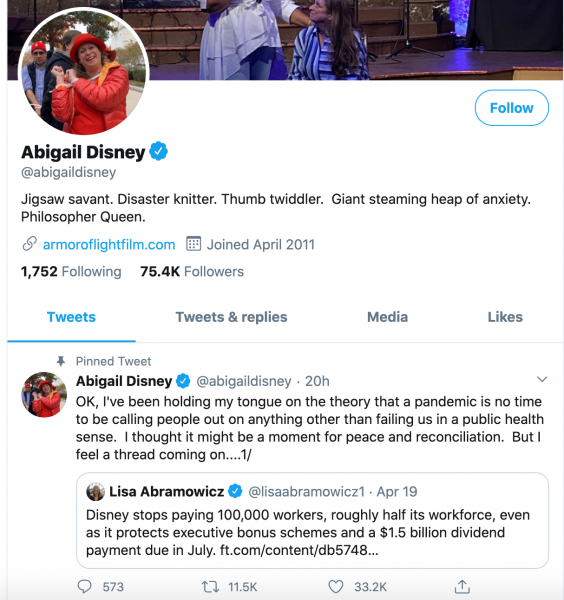 She also shared between March 31st, 2018 and June 30th, 2019, the company earned over 11.5 billion dollars in stock buybacks. She followed up with this call-to-action for Disney execs, “Just give up SOME of your already ample compensation, especially this year.”

“That’d pay for three months’ salary to frontline workers,” Abigail Disney said, published by The Guardian. “And it’s going to people who have already been collecting egregious bonuses for years. Dividends aren’t all bad, given the number of fixed-income folks who rely on them. But still 80% of shares are owned by the wealthiest 10%. Pay the people who make the magic happen with respect and dignity they have more than earned from you. This company must do better.”

The Walt Disney Company hasn’t responded to Abigail Disney’s remarks, but we’ll continue to follow this story as it develops.

What do you think of Abigail Disney’s criticism of The Walt Disney Company? Tell us your opinion in the comments below.

« And Just Like That, Guess What’s Already Sold Out on shopDisney and Selling For $300 on eBay!
Remembering Disney Icons and Community Members We’ve Lost in Recent Weeks »