While Universal Orlando’s CityWalk reopened last month and Florida’s Univeral Orlando’s theme parks reopened on June 5th, the same can’t be said for Universal Hollywood which has remained closed in California since mid-March.

But now Universal Hollywood’s CityWalk has just announced that they’ll begin a phased reopening of several shops and restaurants TODAY!

Universal Hollywood’s CityWalk has just stated that select venues will be open from 12-8 PM daily beginning today. Like in other shopping districts, individual venue hours may vary.

At this time, self-parking is available and complimentary.

Check out our experience from the first day of Universal Orlando’s CityWalk reopening here!

Again, this reopening includes limited venues. The opening locations include the following: 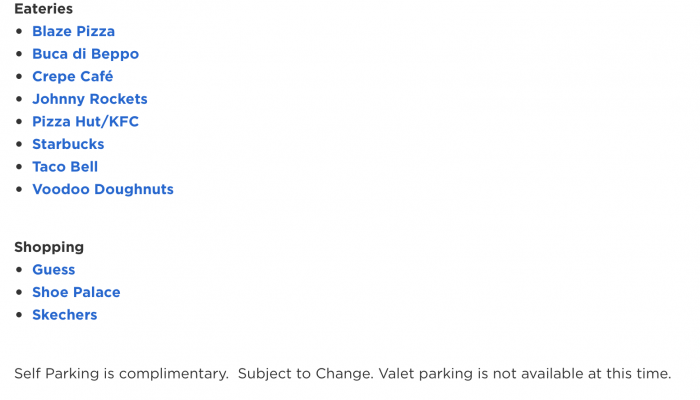 They’ve issued many of the same health and safety measures we’ve already seen implemented at Universal Orlando’s CityWalk including all guests and employees must undergo temperature screenings and wear face masks for the duration of their visit except while eating or drinking.

Universal Studios Hollywood hasn’t announced when their theme park will be reopening at this time, but we’ll let you know as soon as we hear anything! Of course, we’re curious if Downtown Disney will be reopening soon in light of this development, so we’ll be on the lookout for any news pertaining to Disneyland Resort too!

We ate at Universal Orlando’s CityWalk when it reopened! See PHOTOS of what it was like here!

Will you be stopping by Universal Hollywood’s CityWalk for the grand reopening? Let us know if you’re planning on going in the comments below!