Although many Disney theme parks and resorts around the world have reopened, other aspects of the Walt Disney Company are not back up and running yet. 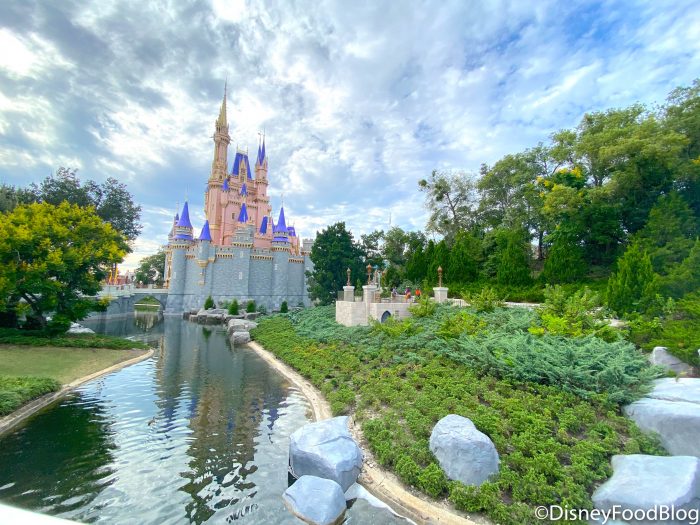 With Disneyland Resort still closed, reduced capacity at Disney’s theme parks, and the suspension of all Disney cruise departures until mid-December, Disney has announced that it will be laying off 28,000 employees.

So far, we’ve seen some updates and initial details about how many Cast Members will be laid off in California and in Florida. The situation, however, is still very much developing.

We’ve seen various statements issued by unions who represent Disney employees in response to the layoffs. We’ve also seen many groups, often organized by Cast Members, doing what they can to support those affected. All of this got us wondering, how exactly are Disney executives handling this situation? Toward the beginning of the pandemic, various Disney executives took some significant pay cuts. In mid-August, however, those temporary pay cuts were lifted.

While the current layoffs are set to affect “executive, salaried, and hourly roles,” many of the Disney executives, particularly those whose full salaries have been restored and who are not being laid off, are experiencing a very different situation than those who have recently received word that their time at Disney has come to an abrupt end. Here’s what some Disney executives have had to say about the whole situation: 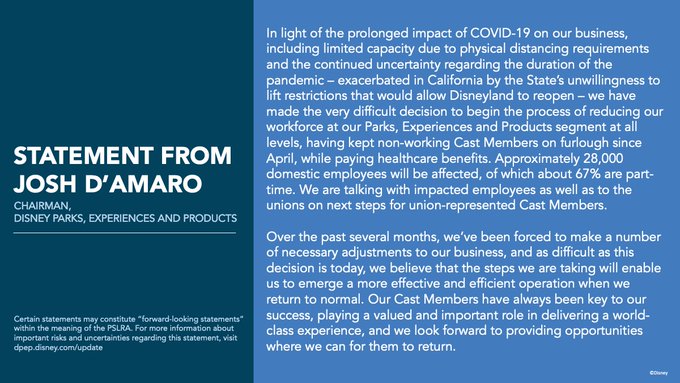 In the statement posted to Twitter, D’Amaro notes that due to “the prolonged impact of COVID-19 on [Disney’s] business, including limited capacity due to physical distancing requirements and the continued uncertainty regarding the duration of the pandemic — exacerbated in California by the State’s unwillingness to lift restrictions that would allow Disneyland to reopen — [Disney] has made the very difficult decision to begin the process of reducing [their] workforce at [their] Parks, Experiences and Products segment at all levels.” 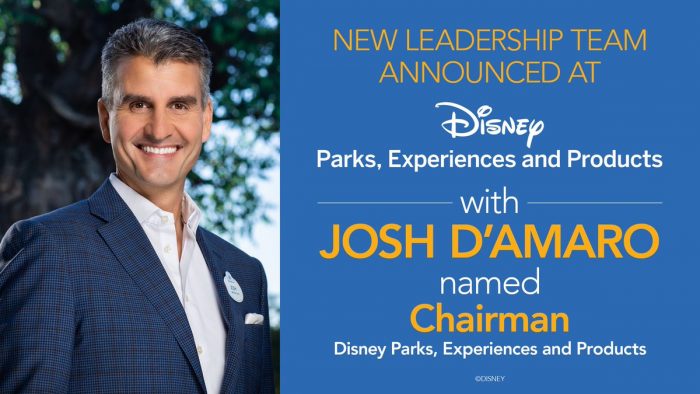 In a letter sent to employees, D’Amaro states that he believes “the heart and soul of [Disney’s] business is and always will be people.” He says that they initially hoped the pandemic would be short-lived and that things would return to normal quickly, but that has not been the case, and, as a result, they are now forced to reduce the size of their team “across executive, salaried, and hourly roles.” In his letter, D’Amaro says Disney “worked tirelessly to avoid having to separate anyone from the company…cut expenses, suspended capital projects, furloughed [] cast members while still paying benefits, and modified [their] operations to run as efficiently as possible, however, [they] simply cannot responsibly stay fully staffed while operating at such limited capacity.” D’Amaro notes that the layoffs are “the only feasible option [they] have in light of the prolonged impact of COVID-19 on [Disney’s] business.”

D’Amaro also thanked Cast Members for their “dedication, patience and understanding” and for all that they have done for the company. According to one post on Twitter, D’Amaro was reportedly seen walking around the Downtown Disney District at Disneyland Resort in the days following the announcement, speaking with and reportedly apologizing to Cast Members directly about the layoffs.

Josh D’Amaro was in DTD all day apologizing to cast members, letting us vent, cry, and whatnot. He probably would let us punch him if we wanted. A lot execs would stay home, but I have to credit Josh for facing the music. The guy looked absolutely defeated.

This week, D’Amaro has been touring Disney World to speak with Cast Members directly.

D’ Amaro has been the executive we’ve seen and heard from the most on this issue — from the layoff message itself to being seen directly in the parks interacting with the fallout.

Bob Iger, the current Executive Chairman of The Walt Disney Company and Chairman of the Board of Directors, has not yet made any direct comment about the layoffs. Despite being fairly active on his Twitter account, Iger has not posted anything since before the layoffs were announced.

In March of this year, Iger agreed to forgo his entire base salary. It is unclear if, when the temporary pay cuts were lifted, Iger’s salary was restored as well or otherwise affected. In an article concerning the current layoffs, The Orlando Sentinel reports that “Disney did not respond immediately to an Orlando Sentinel request on the status of [Bob Iger or Bob Chapek’s] pay.”

Bob Chapek is the current Chief Executive Officer of The Walt Disney Company. Chapek is known for being very fiscally-focused. The Wall Street Journal calls Chapek a “number crunching tactician.” Chapek’s tactics of raising ticket prices and reorganizing operations at the parks to save or make a few dollars have been heavily criticized. 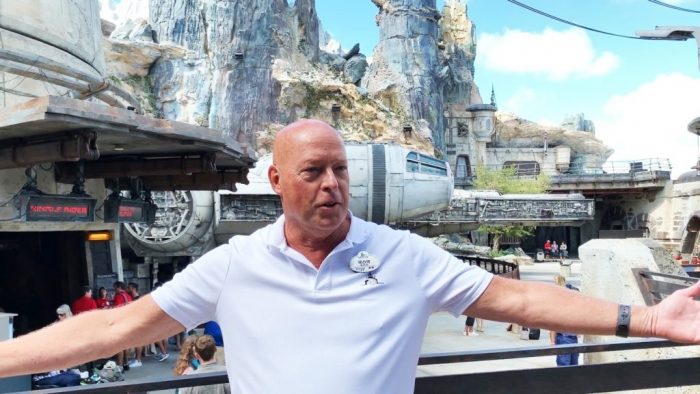 On the issue of the recent layoffs, Chapek has been noticeably quiet. We were unable to find any kind of official statement from Chapek regarding the situation. In March of this year, Chapek agreed to forgo 50% of his salary. It is unclear if, when the temporary pay cuts were lifted, Chapek’s salary was restored as well or otherwise affected.

Recently, Disney has made various WARN Act filings with the State of Florida regarding the number of employees that are set to be laid off in the state. These notices have been issued by Jim Bowden, the current Vice President of Employee Relations for the Disney Company. In the notices, Bowden notes that “[d]ue to the continuing business impacts of the COVID-19 pandemic, [Disney has] made the very difficult decision to reduce [their] workforce.” 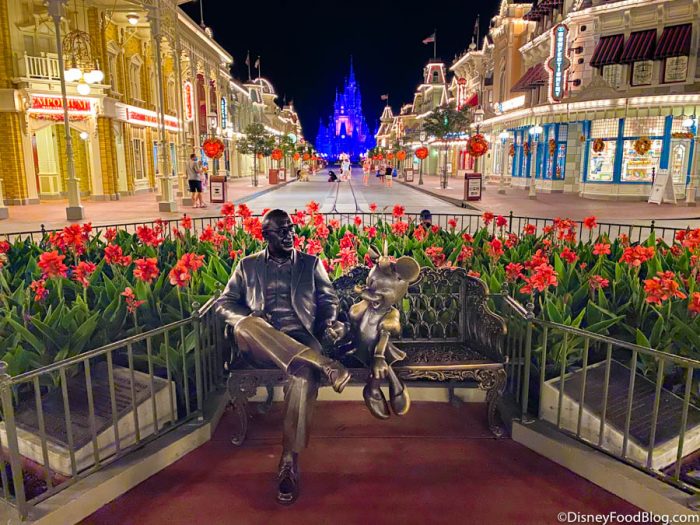 Jeff Vahle is the current president of Walt Disney World Resort. Although Vahle is fairly active on his Instagram, his last post was from two weeks ago, prior to the layoff announcement. We have not yet seen any official statements from Vahle on the current situation.

According to The Press-Enterprise, in a letter sent by Potrock to employees, Potrock noted, “The fact that our parks and hotels remain closed — at a time when almost every other industry has reopened — only compounds the situation at the Disneyland resort… . But the reality is that once we finally do reopen, given the limited guest capacity in our parks and changes to our offerings, our workforce will likely need to look different.” Although Potrock does also appear to be fairly active on Instagram, we’ve yet to see any other statement or post from him regarding the layoffs.

Although she has no position at the Disney Company, Abigail Disney, the granddaughter of Roy O. Disney, Walt Disney’s brother, has made various statements about the layoffs via her Twitter. She has been quite vocal in past years concerning her distaste for how her family’s company is being run. In a fairly lengthy thread, Abigail Disney heavily criticized Disney for the layoffs and noted that she was incredibly sad to hear about them. She also warned that the layoffs will have “serious consequences.”

Finally, most of the Vice Presidents of each domestic Disney Theme Park have remained largely quiet concerning the layoffs. One exception being EPCOT’s VP, Melissa Valiquette. She took to her LinkedIn to leave encouraging words for a number of individual Cast Members that shared they were affected by the layoffs. She offered words of hope stating, “Our Cast will make a difference in this world, even if it’s outside of Disney!”

It certainly is interesting to see how quiet several Disney executives have been about the situation as a whole. It appears they may simply be allowing Josh D’Amaro to serve as the face of this issue since it is his division that is being affected. We’ll keep checking for more statements and actions from these Disney executives in response to the layoff announcement, and continue to update this post as we hear more from them.

Click here to read our post about the layoffs, resources for Cast Members, and how you can help.