Lots of Disney World restaurants have started to reopen recently. 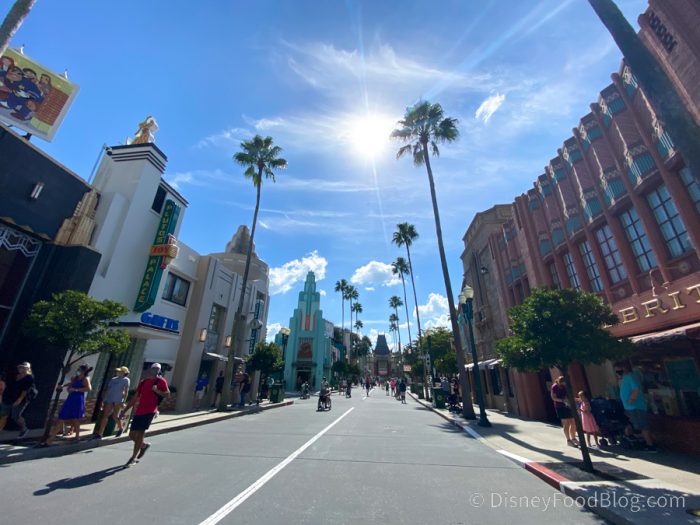 ABC Commissary did a complete reboot of their menu so of course we had to try it out when they opened!

ABC Commissary officially reopened on October 8th with several new menu items! We were not too impressed with this quick-service restaurant before the park-closures, however we were VERY excited be back and check it all out!

As with all other Disney restaurants, there were health and safety measures like physical distance markers and mobile-ordering is highly encouraged. There was also a sign to scan a QR code for the menu. 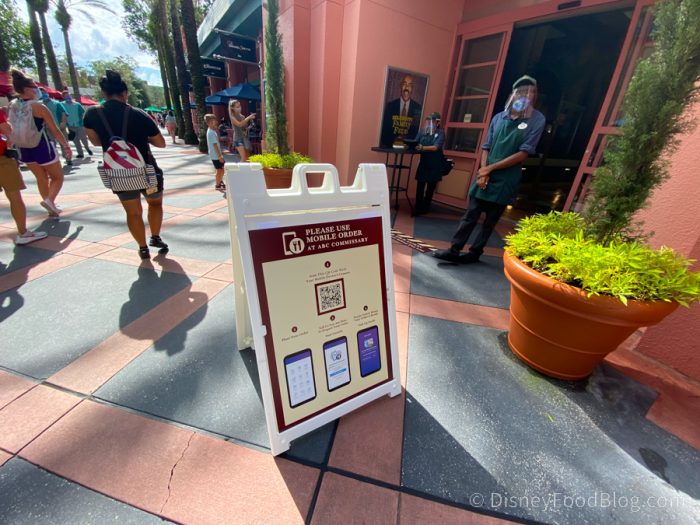 All beverages are no longer self service, a cast member handles it for you. There was still self-serve utensils in dispensers we’ve seen all over the parks, and napkin dispensers were on the tables. Tables are very spread out to maintain physical distance. A Cast Member will direct you toward an open table. 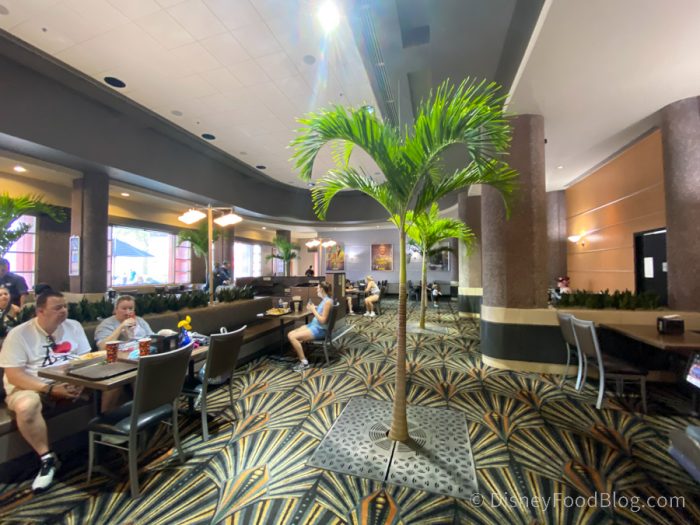 ABC Commissary is not known for its interior. This is not an immersive restaurant and may seem a bit boring on the inside compared to others in the park. The theming is based on ABC television, so you can watch bits of shows as you eat. The palm trees really do add some vibrancy to the place! 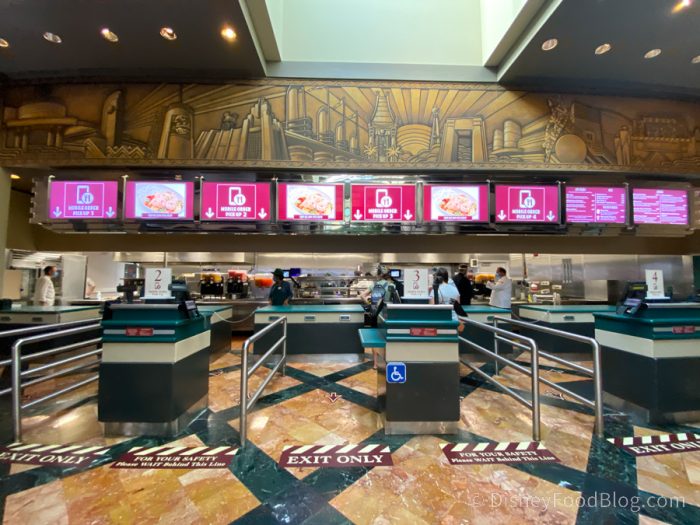 This place has a simple atmosphere, but let’s see how the food matches up!

First up, we tried the Pork Carnitas Tacos! This new item contains pork carnitas on flour tortillas and is topped with salsa verde, pickled onion, and radish. Mexican rice and black beans topped with queso fresco, come on the side. 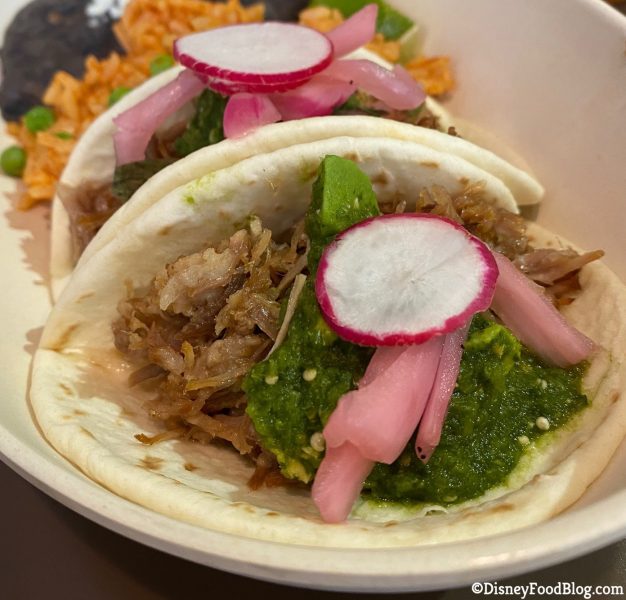 The tacos were GREAT! The pork was cooked and seasoned very well and was flavorful on its own. At first, we did not pick up any heat from the taco, but by the time we were halfway in, it got HOT! 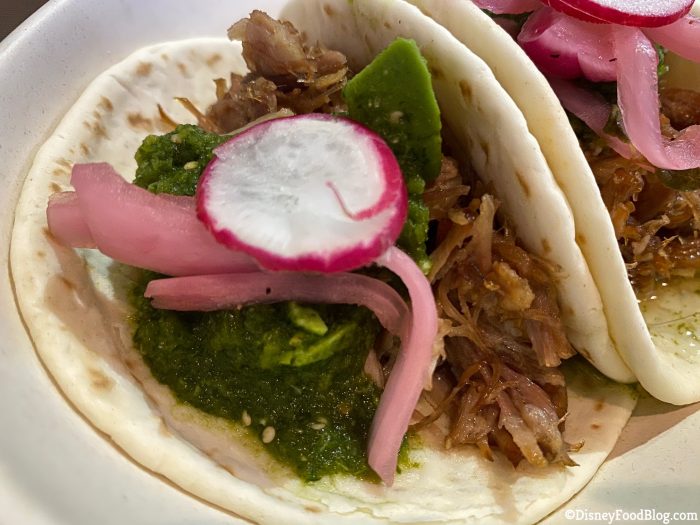 If you are a plain eater, this will be a bit spicy. If you LOVE some spice, you will love these! One thing we noticed was that they added avocado to the tacos even though it was not listed on the menu. We thought it was a great addition to the taco but just something to be aware of! The rice and beans were pretty basic rice and beans, but they did taste good! 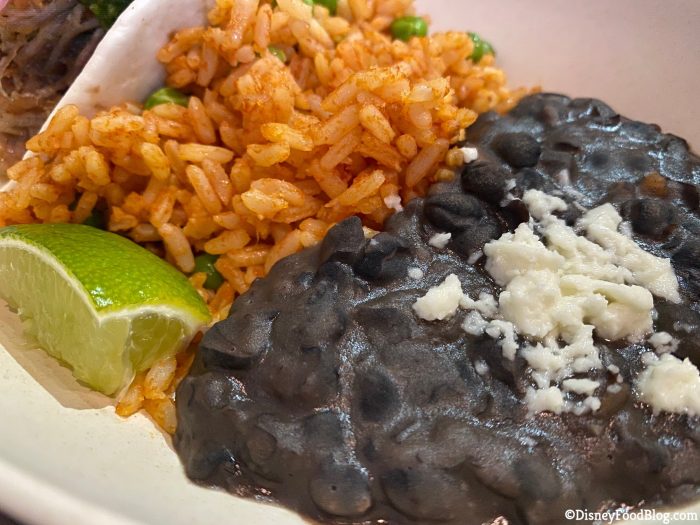 Next, we tried the Curry Rice Bowl with Shrimp! This dish includes sautéed shrimp and vegetables tossed in red curry sauce with jasmine coconut rice. We were not sure what to expect from this one, but we were very impressed! 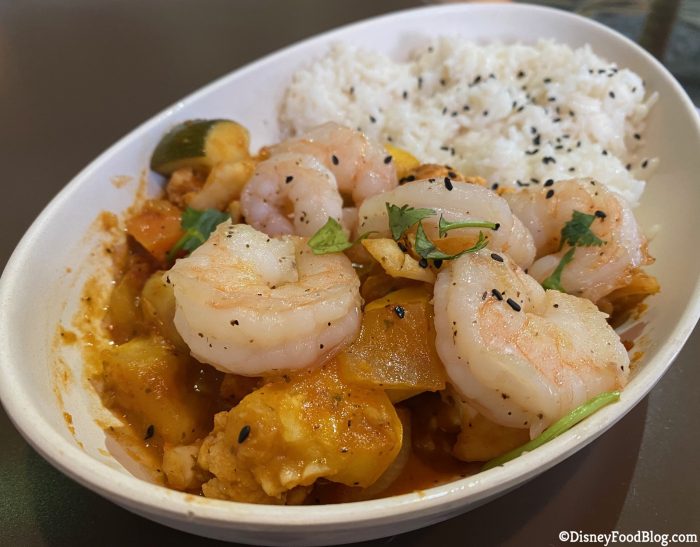 Just like the pork, the texture of the shrimp was AMAZING! The veggies were also cooked perfectly and were a highlight of this dish. The curry had a bit of flavor but it did leave us wanting a bit more in terms of spice. The rice complimented the shrimp and veggies very well and everything was seasoned perfectly! 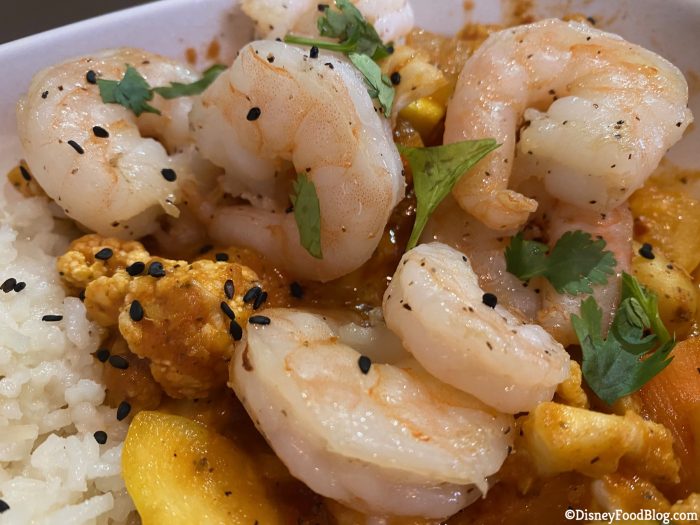 Even if you do not particularly like seafood, we recommend this item! It was not fishy at all and had a really big flavor! You can pick this up for $13.99.

Obviously, we were on a shrimp kick because we went ahead and tried out the Shrimp Tacos too! The tacos come topped with cabbage slaw, chipotle mayo, and mango salsa. The side is the same Mexican Rice and black beans we got with the pork carnitas. The whole entree is $12.99. 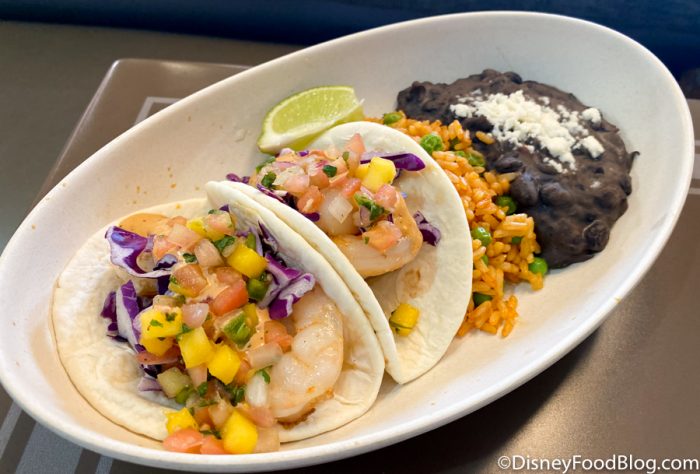 The tacos confirmed that ABC Commissary is a 2020 glow-up! The same big, juicy shrimp from the rice bowl was used in the tacos but these had an extra kick of spice from the chipotle mayo. It was a great tasting meal that also filled us up! 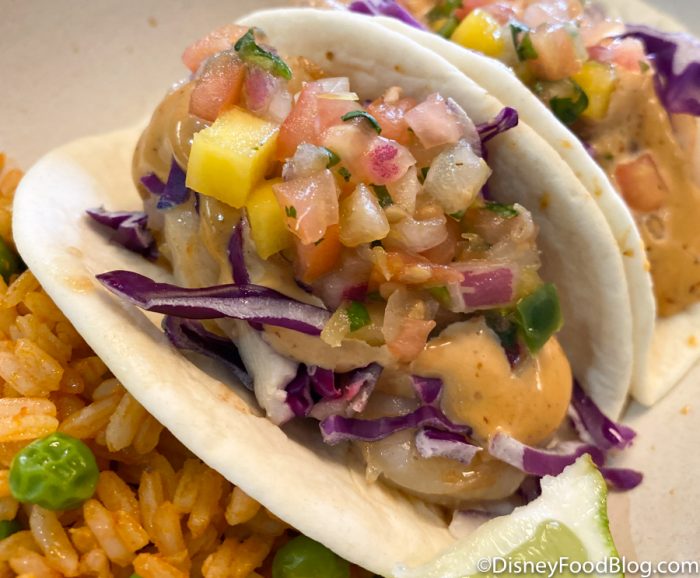 We LOVED the spicy mayo. It only comes with a little sauce on the tacos so we asked for extra and doused our tacos in it. And, the sauce actually has some heat! A rarity at Disney. The Commissary is quickly becoming one of our favorite quick-service spots in Hollywood Studios! 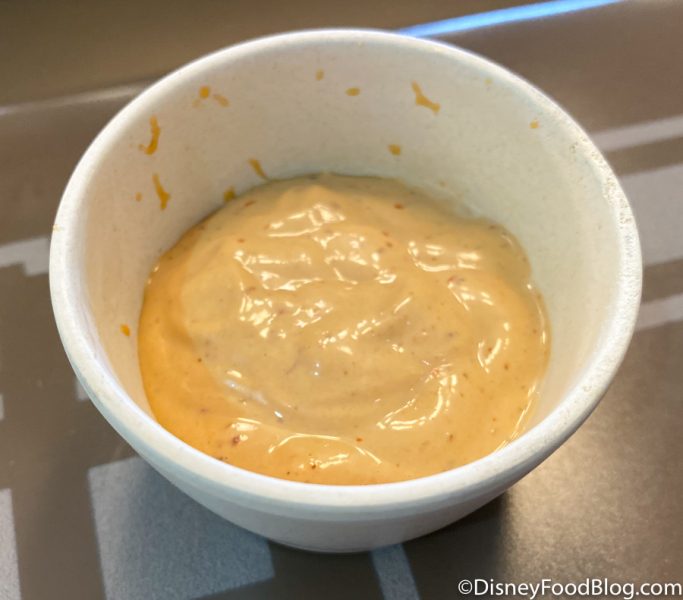 We also tried the Happy Daze drink which the restaurant has been serving for quite some time! This drink is made of Parrot Bay Coconut Rum, melon liqueur, banana liqueur, and grenadine with orange and pineapple juice. We’ve gotta say, this one missed the mark. 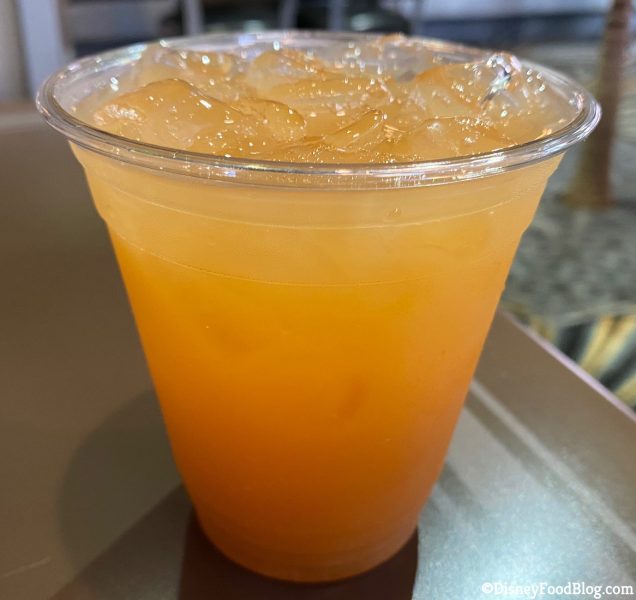 After our incredible food, we had high hopes for this drink! It tasted like your average sweet Disney drink and there wasn’t anything special to it. Basically just a big sugar bomb, and next time we’ll probably skip this one. That being said, there is nothing wrong with a basic Disney cocktail! If that’s your jam, you would enjoy this. This drink is $12.

We tried to make up for our loss and also ordered Watermelon Margarita for $14. 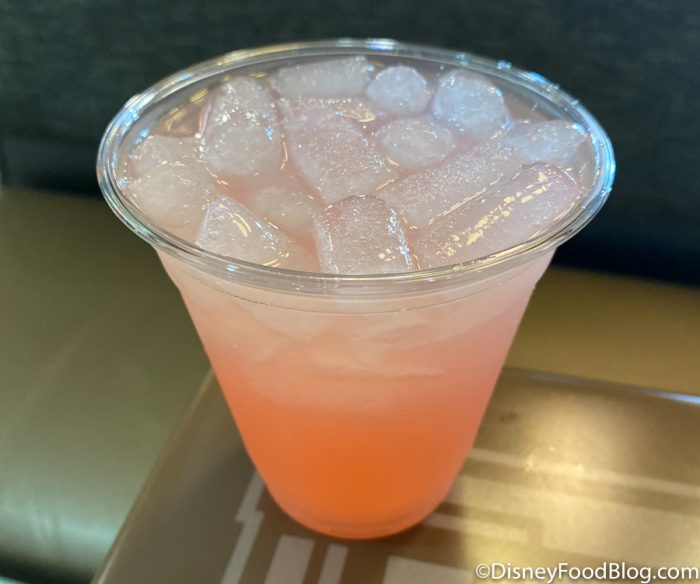 This was a step up from the Happy Daze, but we still aren’t convinced ABC is the place to go for drinks. It was good for a pre-made Disney drink, but not entirely memorable. You’re better off heading to BaseLine Tap House or the lounge at The Hollywood Brown Derby Lounge for a solid cocktaixl!

Head to ABC Commissary if…

Dine somewhere else in Hollywood Studios if…

We are so thrilled we got to try out the new menu at ABC Commissary! Overall we were super impressed with the food! Since the food was not great in the past, we did not have high expectations but they proved us wrong!

ALSO, the price was totally fair for the amount of food you got which is a HUGE plus in Disney World. We would say this is one of the biggest comebacks from a Disney restaurant that we have seen in a while!

The only bad thing we had to say was that the alcoholic drink was a bit of a let down. If you want a quick meal with some television, this is your place!

Check out this FUN Halloween drink in Disney Springs!

Will you be visiting ABC Commissary on your next trip to Disney World? Let us know in the comments!