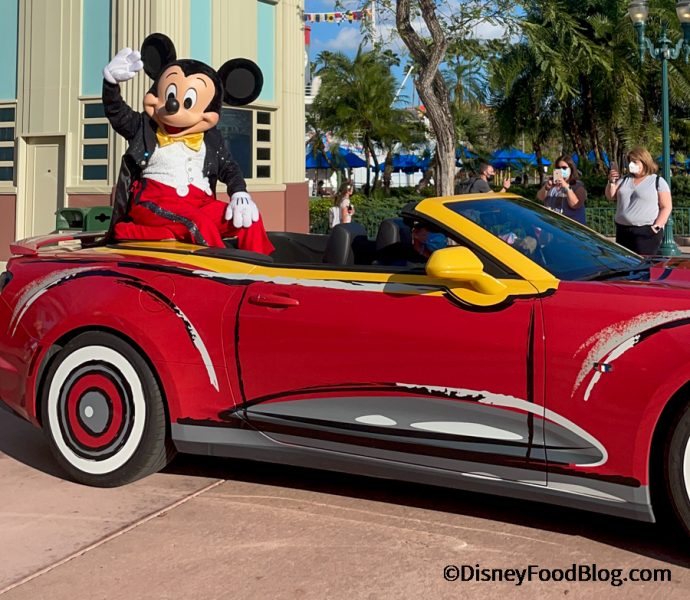 But, you can still see some of your favorite Disney friends from a distance in other ways all around Disney World. If you’re a BIG Mickey Mouse fan or you’ve got a little one who couldn’t go a single trip without saying “hello” to the big cheese, you might be wondering where you’ll be able to find the leader of the club during your next trip. Well, don’t worry — we’ve got the answer right here!

Today we’re sharing a full list with you of EVERY single place you’ll be able to find Mickey in Disney World right now! Of course, this post is based on our own personal experience in the parks. Things are always subject to change. But, based on the times we’ve been in the parks, these are the spots where you should be able to see Mickey Mouse! He isn’t always easy to find, so this list should help you know where to go to see the big cheese himself.

While parades have been suspended in Disney World, you can still see some of your favorites (including Mickey) in the character cavalcades.

In Magic Kingdom, you’ll find Mickey in the Mickey & Friends Cavalcade. Mickey is typically at the top of the float… 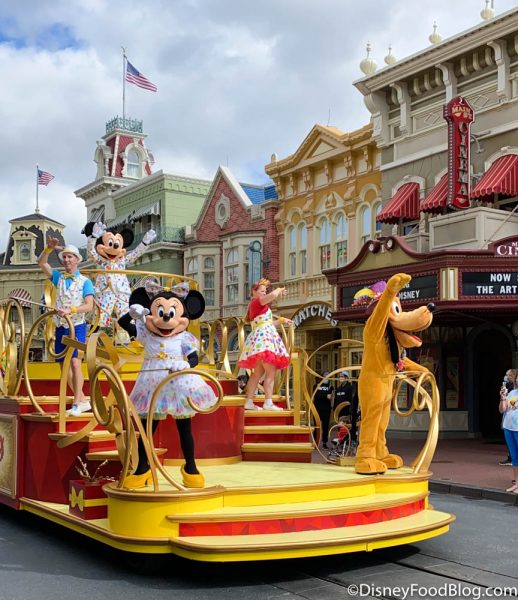 …although we have seen that switched up sometimes! 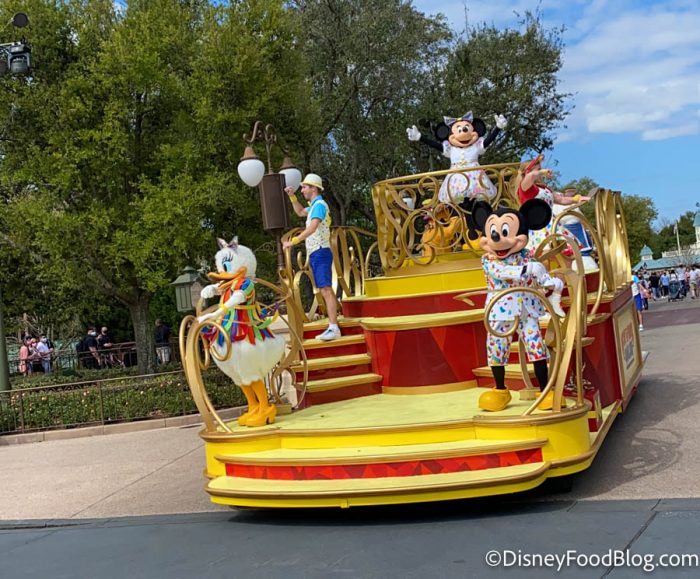 Minnie at the top!

If you happen to visit Magic Kingdom during a rainy day, you might get the Rainy Day version of the cavalcade. 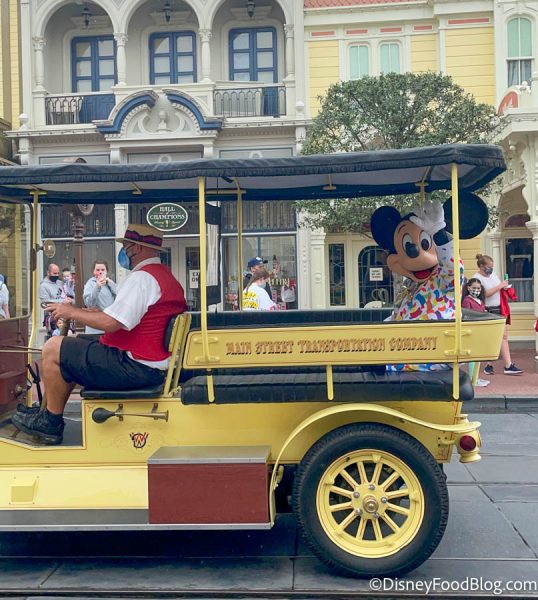 You’ll still generally be able to find Mickey sitting in the back of a Main Street vehicle. The cavalcades in Magic Kingdom generally follow the same path that the parades used to — meaning, they start in Frontierland, go through Liberty Square, come in front of Cinderella Castle, and then finish on Main Street, U.S.A. 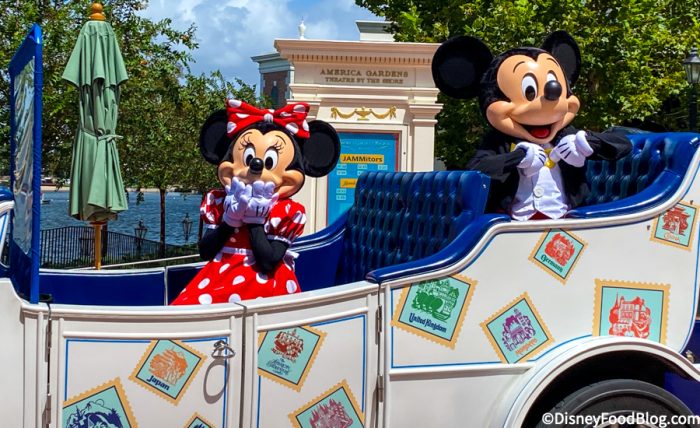 What a perfect pair! The promenades in EPCOT generally start at the gate in between the Mexico pavilion and Norway pavilion.

In Disney’s Hollywood Studios, you’ll find Mickey in the Mickey and Friends Motorcade. 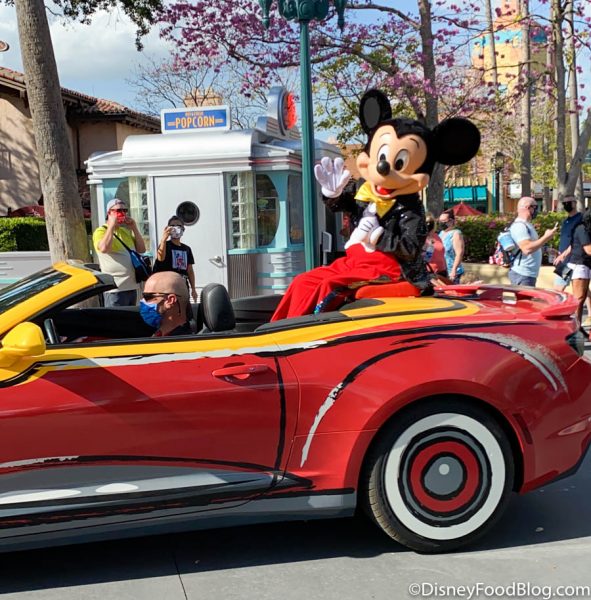 Typically he’ll be riding around in a car, but sometimes he might walk past as well. 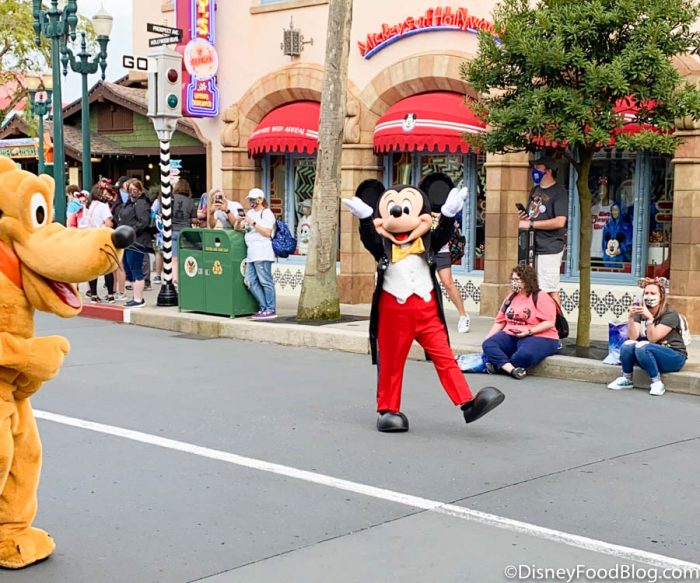 The motorcade goes down Hollywood Boulevard and past Echo Lake.

In Disney’s Animal Kingdom, you’ll find the Leader of the Club on the Mickey and Friends Flotilla. 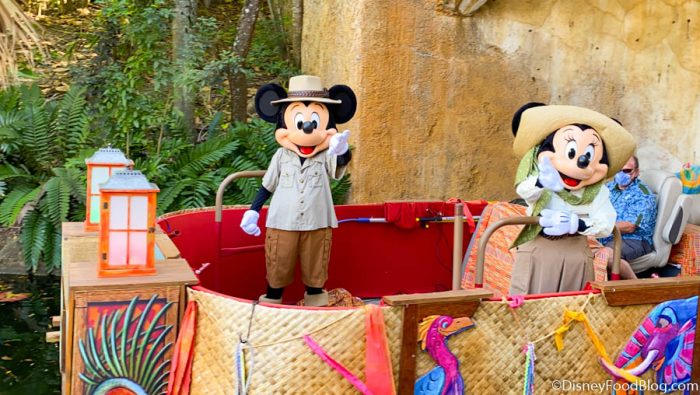 Mickey is usually with Minnie as they float down the waterways of Discovery River. One of our favorite spots to watch the characters from is Nomad Lounge — you can enjoy some delicious treats AND get a great view of the flotillas from the outdoor seating area.

Do note, times are not released for these experiences. So it’s almost by luck that you will catch them passing by. They do happen multiple times a day in each park though. So, keep those eyes and ears open so you know when to stop. It’s also important to know that some cavalcade rotates characters throughout the day, so you may spot a cavalcade without Mickey in it.

If you want to say hello to Mickey while chowing down on some delicious food, then you might want to try a modified character dining experience in Disney World. At these modified experiences, you won’t get the chance to stand up and hug the character or be directly next to them. Instead, the characters will generally walk around the restaurant during your meal. You’ll also generally get the chance to take some socially distanced selfies with them.

Right now, you can find Mickey at modified character dining experiences at the Good Morning Breakfast with Goofy and his Pals at Ravello in the Four Seasons Orlando at Walt Disney World Resort… 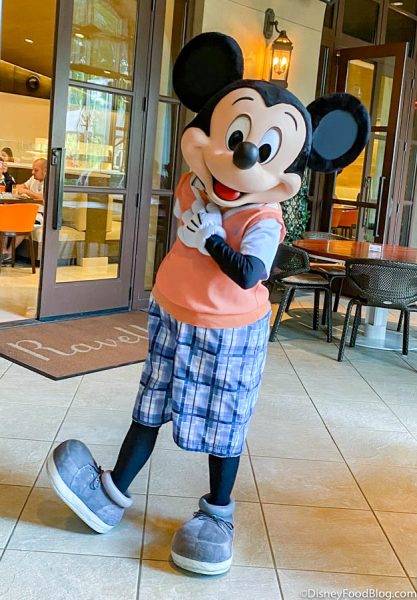 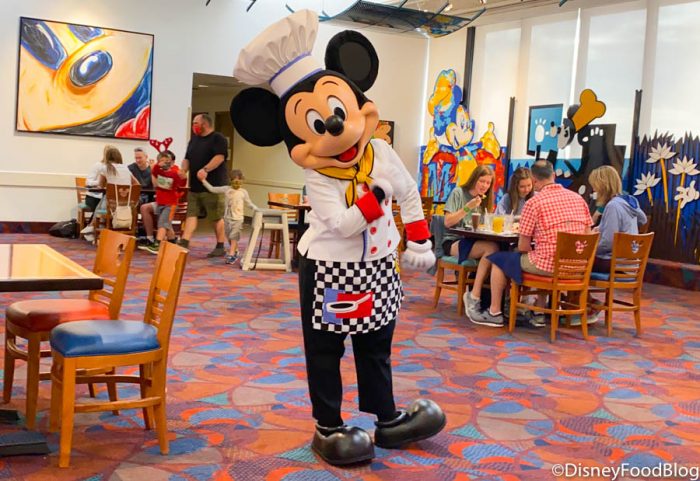 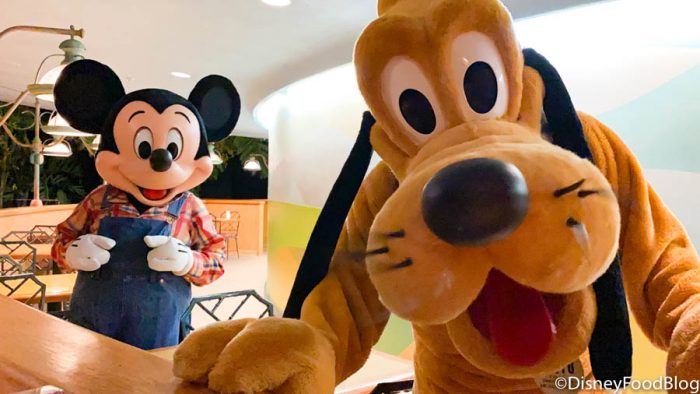 …and Minnie’s Seasonal Dine during lunch or dinner at Hollywood & Vine in Disney’s Hollywood Studios. 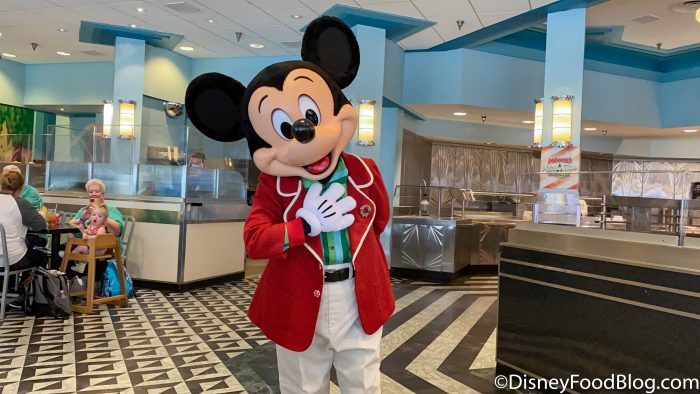 Click here to read about our character dining experience at Garden Grill Restaurant!

Finally, you can sometimes spot Mickey and friends in other spots around the parks. For example, we’ve sometimes seen Mickey up on the Main Street, U.S.A. train station in Magic Kingdom. 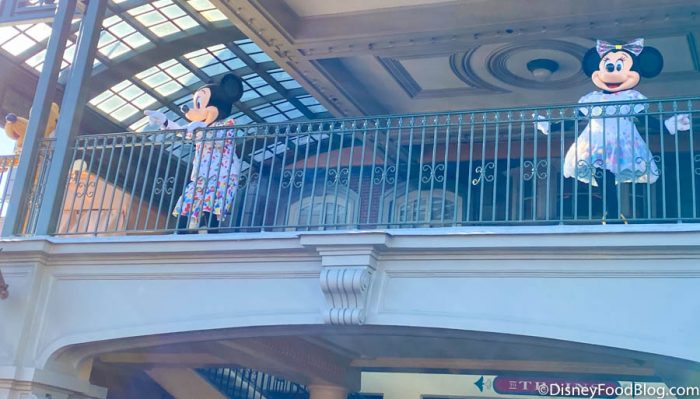 You can also find Mickey at the Disney Junior Play & Dance Party in Disney’s Hollywood Studios. 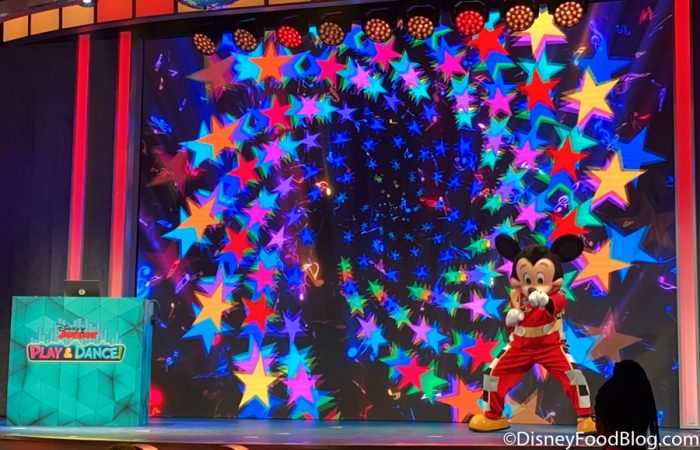 Recently, Mickey also popped up at the entrance of EPCOT, with Minnie nearby. 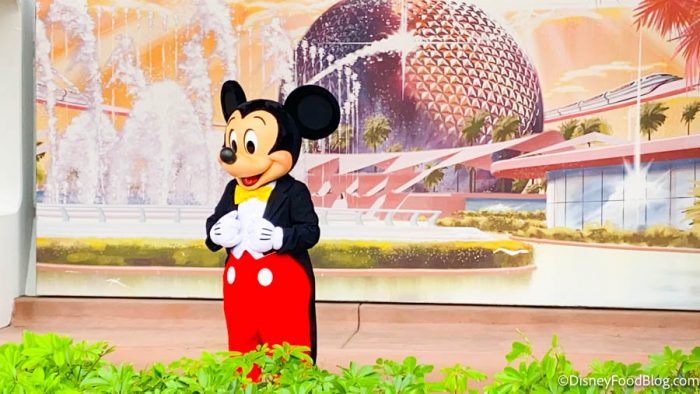 Characters have also been making the rounds at some Disney World hotels. While we’ve mainly seen Goofy or Pluto, other characters could potentially pop up as well. So, if you spot one of these caravans in front of your hotel, you might get some more fun distanced character meetings! 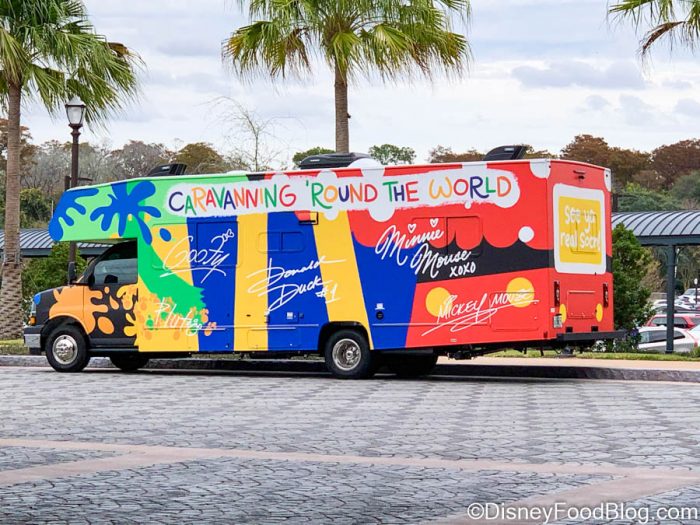 Character Caravan at the Riviera

While there are some standard places Mickey typically appears, you’ll always want to keep your eyes peeled for the Main Mouse! Disney has continued to evolve its character experiences. As the situation with the pandemic and Disney World develops, we’ll be keeping an eye out to see if there are any other changes made to Disney’s character experiences.

Be sure to come back for all the latest updates!

Not heading to Disney World until the holidays (or just missing those holiday vibes)? Check out the Disney World holiday cavalcades by clicking here!

Is seeing Mickey a must-do for you? Let us know in the comments!