Well, we’ve gotten QUITE the big news out of Disneyland recently!

Disney has just announced some multi-year plans for expansion of its theme parks, shopping, and parking. “DisneylandForward” is what Disney is calling its planning effort with the city of Anaheim to make some of these changes possible. What exactly is DisneylandForward though and what does it involve? We’re breaking it all down for you here!

The DisneylandForward website describes “DisneylandForward” as “a multiyear public planning effort with the City of Anaheim to update existing development approvals that will allow Disney to meaningfully invest in Anaheim for years to come and meet the future demands in entertainment.” What does that mean?

A Bit of History

Well, let’s go through a bit of history. As the DisneylandForward website notes, when Disneyland first opened all the way back in 1955, “no one could have predicted its impact on Anaheim and the world.” Basically, Disney notes how the Anaheim area has now become a MAJOR tourist destination. 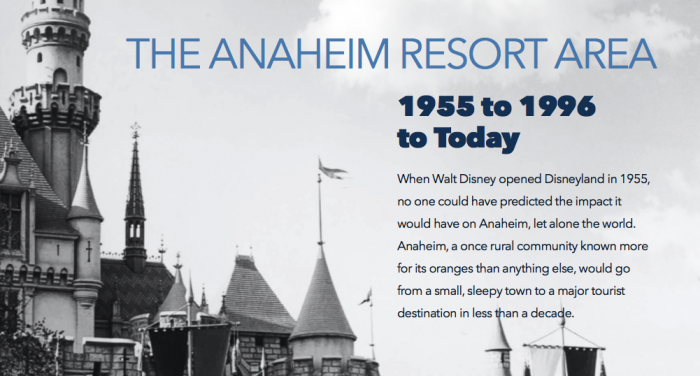 After Disneyland reopened, motels, restaurants, and other businesses grew up around Disneyland. Then, in the 1990s, the City of Anaheim approved plans that would help “guide the growth” of Disneyland Resort and the businesses in the area. Those plans created districts or zones that specified what types of developments could be built where. Those plans also had guidelines about sizes of developments, height limits, and more.

Since the 1990s, a lot has changed at Disneyland and the area surrounding it. Disneyland has since opened its second theme park — Disney California Adventure Park — and much more. Disney continues to invest in Disneyland with projects like Star Wars: Galaxy’s Edge, Mickey & Minnie’s Runaway Railway, Avengers Campus, and more.

What Disneyland Says It Needs Now

Now, Disney notes that “the addition of more attractions and experiences in the future may be limited under current inflexible planning restrictions unless we remove and replace treasured rides and attractions in our parks today.”

Disney notes that those plans that were approved in the 1990s used a “traditional” district/zone approach. According to Disney, this “traditional” approach doesn’t allow for “the diverse, integrated experiences theme park visitors now seek, severely limiting Disney’s ability to continue investing in Anaheim.”

Basically, DisneylandForward is Disney’s push to work with the city of Anaheim and the community to update the existing plans to allow for more flexibility for their future plans. 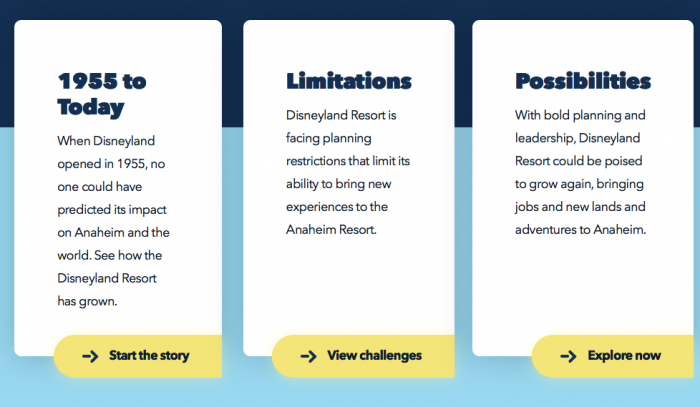 To be clear, Disney has noted they are not seeking public funding for DisneylandForward. They’re also not looking to get any additional square footage or physical land beyond what is approved and allowed right now. What they’re trying to do is work with the city to get more flexibility for their future plans. As one Disneyland spokesperson put it, according to the OCR “We’re not changing the size of the toast, we’re just spreading the peanut butter around.”

Disney has noted that without getting more flexibility in terms of what is allowed in each district, or demolishing and replacing beloved theme park attractions, some of their further plans for investment in Disneyland Resort wouldn’t be possible.

Click here to read a statement from Disneyland’s President about DisneylandForward.

The Concept Art and Plans

Here’s a peek at the concept art that’s been released as part of these plans. There’s a whole bunch to unpack there. You can see a new mountain area on the left and more. 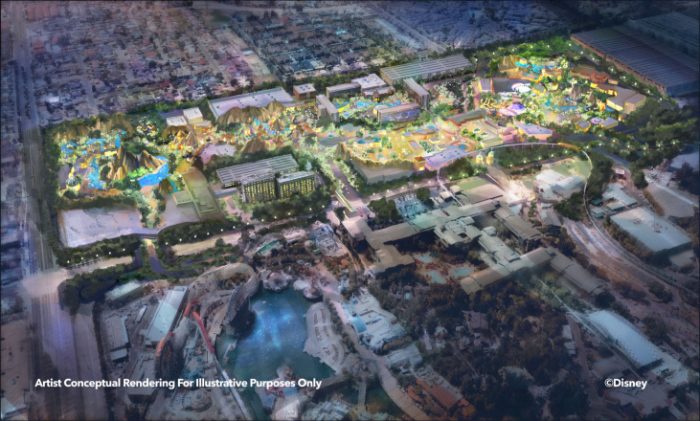 And here’s at their “possibilities map” showing some of the expansions to the parks that could be coming down the line, again if they can get the flexibility they’re looking for from the city. 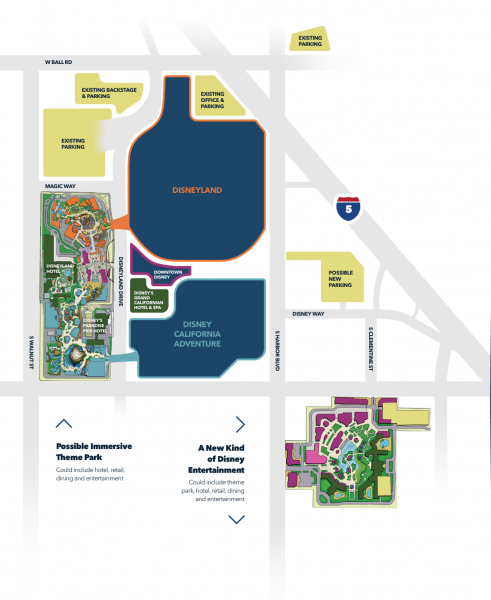 Disney notes, of course, that these are just for illustrative purposes. Things could continue to greatly change.

Click here for a more in-depth break-down of the concept art!

At the moment, Disneyland is NOT officially announcing anything that will be part of their proposed expansions. But, we do have a look at that concept art to give us some ideas of what COULD be. 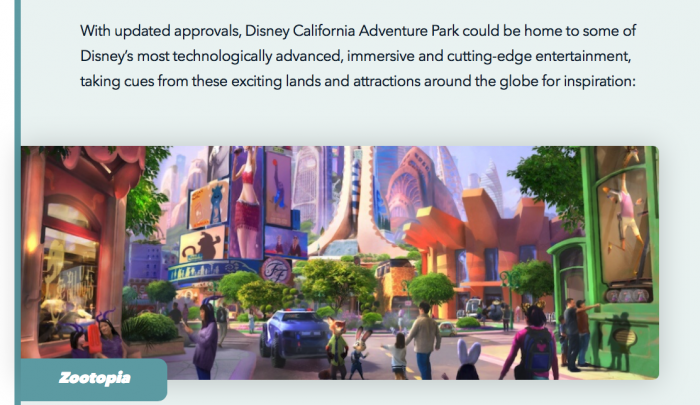 Disney also notes that they plan to invest in transportation parking, and more to improve mobility. Part of the plan includes a new parking area at Disneyland and a pedestrian bridge linking certain areas at Disneyland Resort.

Disneyland’s plans for future expansion will have to be approved by Anaheim city leaders. Right now, it’s expected that the back-and-forth planning process about these things will last about 2 years before any decisions are finalized. So, basically while parts of Disneyland could change in the future thanks to increased flexibility in those districts and what not, it’s not going to be a quick process.

And that’s a basic break-down of what DisneylandForward is. There’s a lot that remains to be seen or more than needs to be further explained about Disney’s plans. And a lot is still subject to change or later be determined depending on how their efforts in working with the Anaheim city leaders work out.

We’ll be on the lookout for more updates and let you know what we find.

Are you excited to see how Disneyland might expand some of their areas in the future? Tell us in the comments!

« PHOTOS! Breaking Down the CONCEPT ART for the Disneyland Expansion
What COLOR Are Disney’s New Minnie Ears?! Seriously, Tell Us…We’re Fighting About It! »