Disney tends to be on the cutting edge of technology when it comes to theme parks. 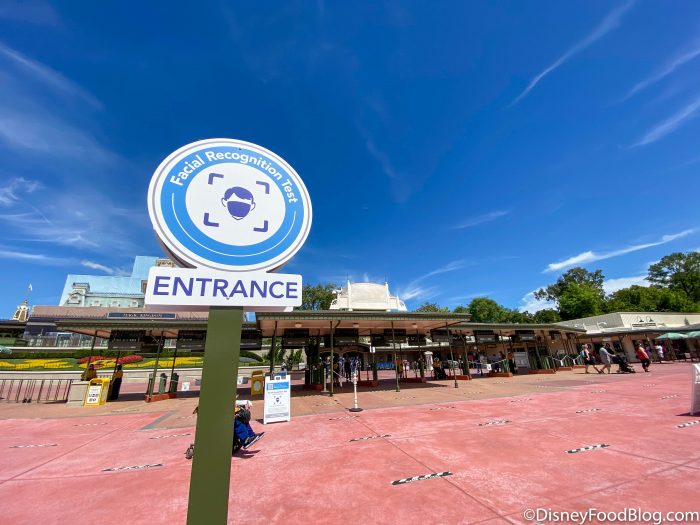 Now, Disney World is testing an all-new facial recognition system for park entry that could replace finger scanners. The process is currently opt-in through April 23rd as it’s tested and Disney collects data (You know we gave it a try!). Some folks aren’t loving the idea of facial recognition, so we wanted to break down how it works!

Why is Disney using facial recognition for park entry?

So, why is Disney trying out facial recognition for park entry. According to the Walt Disney World website, “At Walt Disney World Resort, we’re always looking for innovative and convenient ways to improve our Guests’ experience — especially as we navigate the impact of COVID-19.” The site notes that this tech has been developed “with the future in mind and the shift in focus to more touchless experiences.”

Over the years, Disney has used a number of different methods to get guests into the parks. There were the old turnstiles and then touchpoints —and now facial recognition could be the next step.

It was prior to the mid-1990s that turnstiles were used. The finger scanners were introduced (first in 1996 and then expanded) to speed up entry and help the entrance to Magic Kingdom feel more welcoming. 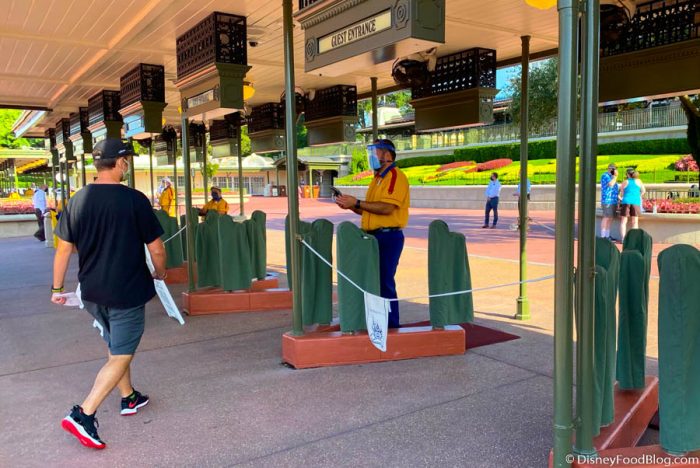 Fast forward to today and facial recognition could help to further speed park entry and increase how welcoming the park feels, PLUS reduce touch points which is a major priority in the current health climate.

How does facial recognition work?

This question is tricky considering Disney hasn’t released exact details behind what kind of facial recognition technology is being used. Based on their description, it may not be all that different from the finger scanners the parks have used for decades. 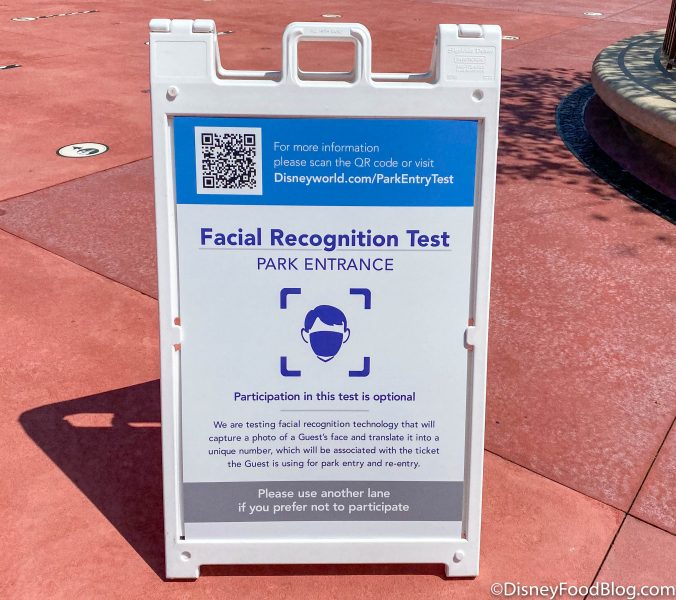 Essentially, the way finger scanners work is they take a measurement of your finger (no fingerprint!) and convert that measurement into a string of numbers that is coded to your ticket. The first time you use a new ticket, a new measurement is taken and associated with your ticket until it expires or is used. Then, your measurement is discarded 30 days after. That’s why you always need to use the same finger when entering the parks! This method does not generate 100% unique numbers for each person. Someone with a VERY similar hand could technically generate the same numbers, but it’s statistically unique enough to make sense for a park entry application. 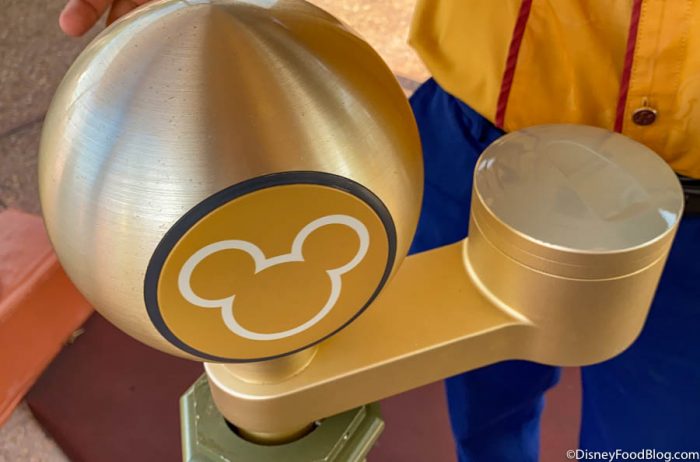 Of the new facial recognition tech, Disney says, “The technology we’re testing captures an image of a Guest’s face and converts it into a unique number, which is then associated with the form of admission being used for park entry.” This language sounds very similar to the tech behind finger scanners. Instead of capturing an image to associate with your ticket, this tech is likely capturing measurement to convert into a number (think head width, eye distance, forehead length, etc.) 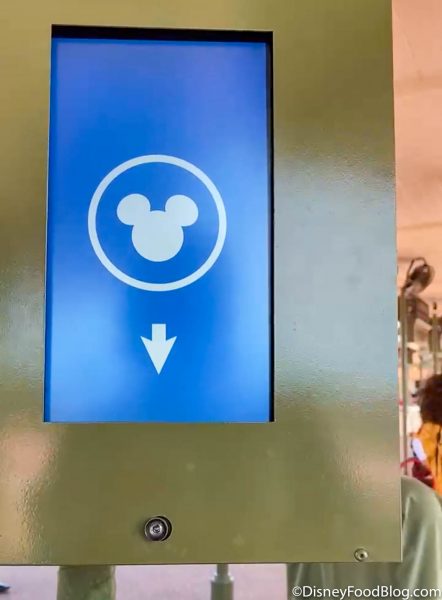 Now, Facial recognition is not totally new. Your smartphone probably has an option to use facial recognition to unlock your screen. For Apple, this is called Face ID. Apple explains, “The TrueDepth camera captures accurate face data by projecting and analyzing over 30,000 invisible dots to create a depth map of your face and also captures an infrared image of your face. A portion of the neural engine…transforms the depth map and infrared image into a mathematical representation and compares that representation to the enrolled facial data.” Unlike Disney’s tech, Face ID can work with sunglasses and hats — but not with masks.

It is interesting that Disney’s technology works with face masks. This likely means it was developed to focus on the top half of the face for measurements. That’s very neat considering that means the tech was developed or at least reworked in the last year!

One thing you’ll note is that Face ID, and likely Disney’s facial recognition, create a depth map of the face. That means your measurement number reflects the way your face is shaped on a 3D level. So your smartphone AND Disney’s entry terminals wouldn’t be able to be tricked with a 2D picture. 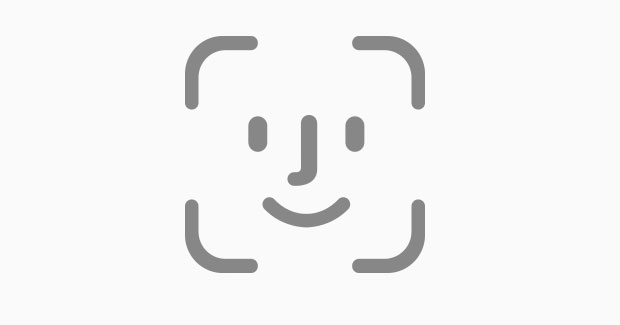 This “map” of your face might be a little bit different in Apple’s tech, but the concept is likely the same. Disney pulls the different measurements it’s seeing in your face and turns them into a figure, just like Apple’s tech. 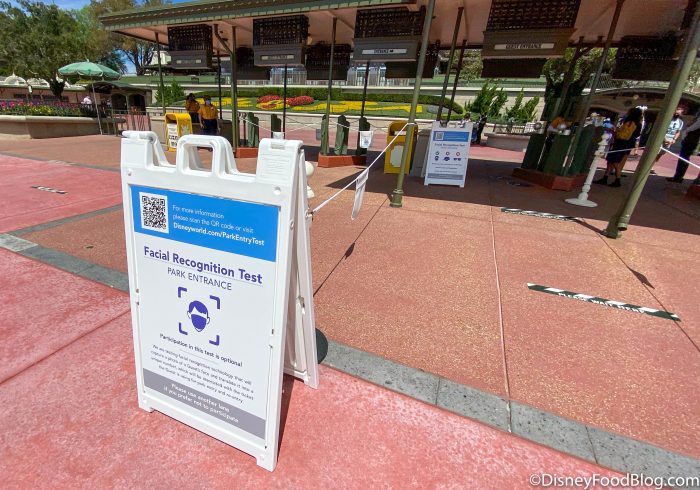 Disney World isn’t the only theme park company to introduce facial recognition this week. According to blooloop, theme park company Miral’s Yas Island in the United Arab Emirates announced their new FacePass for entry AND contactless payments. Could this be the future of park entry? Maybe.

Disney calls your face number in this instance “unique” which might mean that the facial technology DOES have the ability to make sure every guest has a different number — even if they have strikingly similar faces. 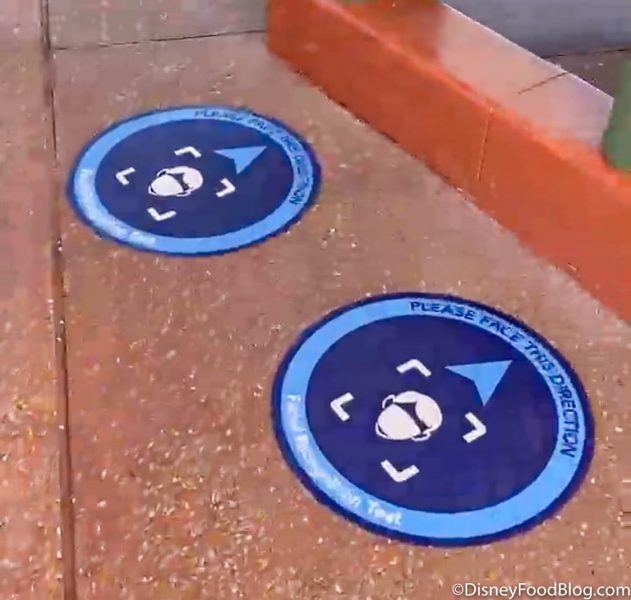 Here’s Where to Stand

Remember though, this tech is in TESTING. So, Disney is looking for pitfalls at this time. Once testing concludes, we can consider facial recognition a “foolproof” method for matching tickets to guests — just like finger scanners. If they continue to use it, of course.

From a cybersecurity perspective, facial recognition is as safe as the other data that Disney keeps on you. Just like with the finger scanners, any imagery or numbers will be deleted 30 days after the end of the test (and presumably ticket use if this system is fully launched).

Still, Disney acknowledges that “despite our best efforts, no security measures are perfect or impenetrable.” Disney has teams that work hard on the security of data, but (just like with finger scanners) an image and unique number are stored electronically. Anything stored electronically is subject to security threats. The same is true for your credit card numbers, phone numbers, and more.

It’s an unfortunate reality. Cybersecurity breaches are rare in Disney World, but they can happen. Recently, a few Disney Springs restaurants were targeted — but they were third-party and not a part of Disney’s system. No system is TRULY foolproof when it comes to cybersecurity, but a company like Disney has a LOT of weight behind fortifying data. 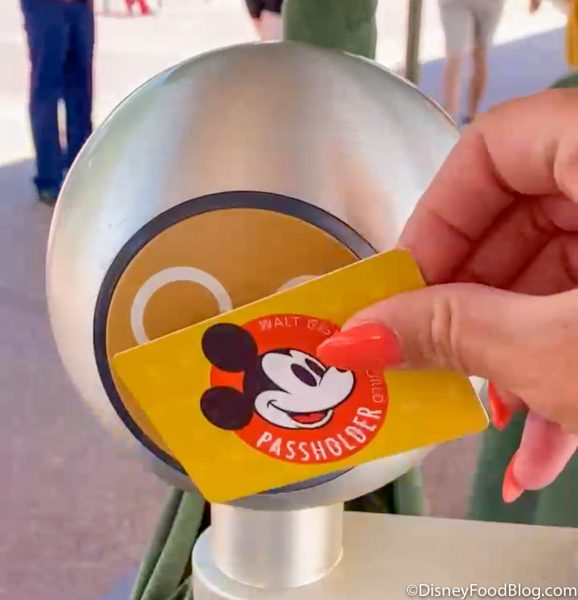 Plus, it’s possible that Disney already has your face on file. PhotoPass pictures taken on and off attractions are linked to your account and MagicBand. These are deleted after some time, but depending on how often you go to the park, you’re supplying updated photos. On Disney cruise ships, photos are sorted through facial recognition to identify the people in the photo, per Consumer Reports. So again, your face might already be temporarily stored at times. 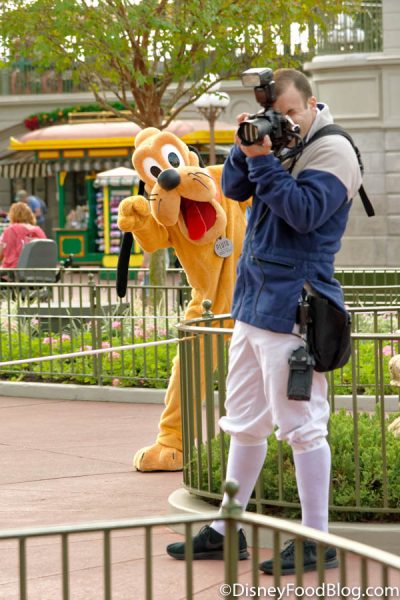 Plus, the entry method in Disneyland has involved an actual photo taken of your face by Cast Members (and the same is true for kiddos who have hands that are too small for the scanners in Disney World). A Cast Member then reviews that photo linked to your ticket when you return on the same ticket. It might seem like facial recognition is radical and big brother-y, but it’s really similar to a PhotoPass photo or picture at the gate — which folks have been okay with for years.

Will facial recognition be the new way we enter Disney World?

That’s hard to say! If the tests don’t yield the results that Disney is looking for — no. If they do, though, it’s entirely possible facial recognition would replace finger scanners. Once Disney determines that the tech is functional and secure, they may seek to expand it as the new main entrance method to help reduce touchpoints. It’s up in the air at this time as Disney gauges the technology and determines guest reaction (which per our readers is split right down the middle). 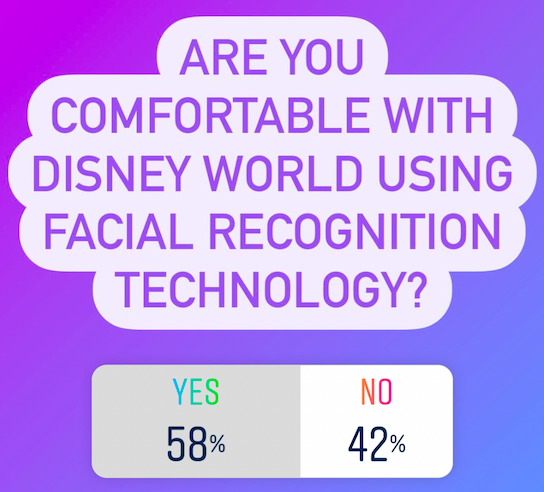 Here’s what YOU said!

Overall, Disney might be looking at a shift to facial recognition to reduce touchpoints, speed entry, and make the parks feel more welcoming. Plus, if facial recognition CAN create a totally unique personal number, then it’s more accurate than the finger scanners too.

We’ll, of course, be keeping a close eye on facial recognition as it continues testing so stay tuned to DFB for all the latest updates.

Click here to see how our readers feel about facial recognition!

What do you think of facial recognition in the Disney parks? Tell us in the comments!

« Would You Pay $300 For a Bag With Rare Disney Characters On It?!
The Most Divisive Springttime Candy Just Got Its Own Donut in Disney World! »