Hello, world travelers! We’re back with another look at what’s new in EPCOT! 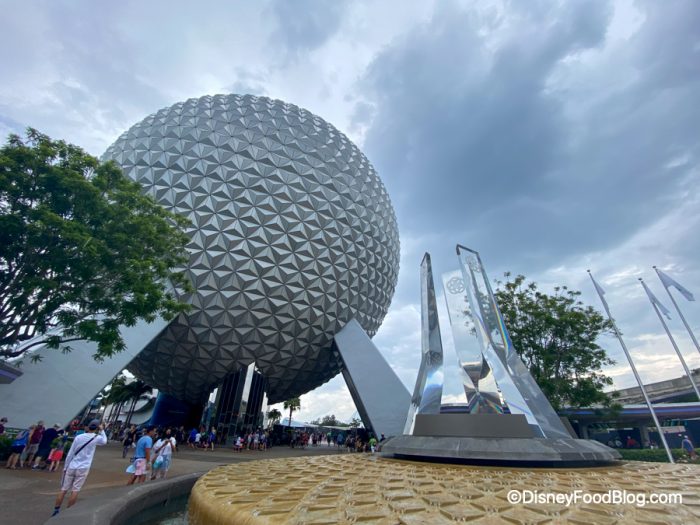 We’ve got sunshine on a cloudy day!

What’s going on at EPCOT right now? Well, the EPCOT International Food and Wine Festival is well underway, the park is set to open early on select days in August, and recently we even got a first look at the park’s NEW fireworks show. Come with us now as we explore some of the newest updates we found in EPCOT this past week.

For those of you looking for plant-based food options, the BBQ Jackfruit Burger over at the Regal Eagle Smokehouse: Craft Drafts & Barbecue in the American Adventure pavilion might be something to look into! This sandwich isn’t new, but we hadn’t really grabbed it before so we decided to get it during one of our recent trips! 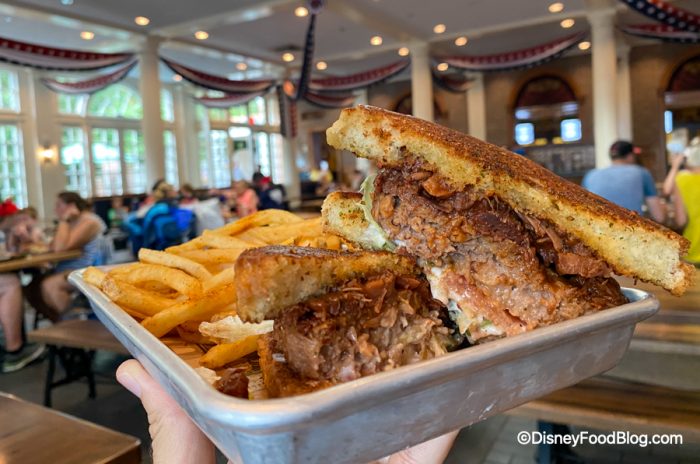 This plant-based burger is made with garlic toast and is topped with BBQ jackfruit, plant-based mayo, and lettuce! It is also served with your choice of a side (we chose fries!).

The toast that it’s served on was DELICIOUS!! It was seasoned well and very buttery. And the sandwich overall had a really high quality bbq flavor. There was a slight bitter aftertaste though, but we think that may have been from the jackfruit. That would probably be the biggest indicator to a meat eater that this is actually not barbecue meat. 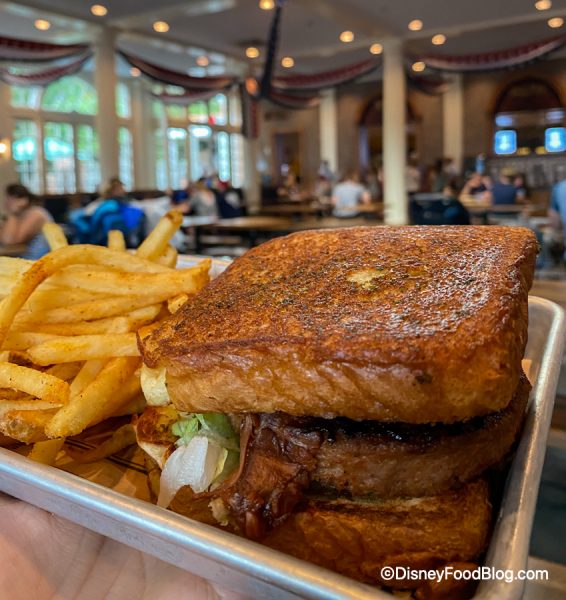 Still, we think that someone who eats plant-based foods or loves really good barbecue sauce, but wants something that feels a bit lighter than eating a big plate of meat, might really enjoy this!

You can grab this burger for $12.99 at the Regal Eagle Smokehouse.

Over at the Italy food booth at the Food & Wine Festival, we noticed that something was missing during one of our trips! 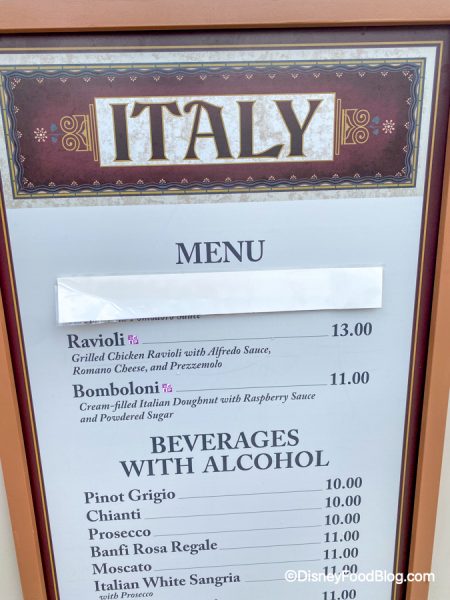 The Mezzelune Croccanti dish, which is made of Crispy Half-moon Breaded Mozzarella-filled Ravioli with Pomodoro Sauce, was not available! It’s interesting because this item also wasn’t available during our first trip to the Festival. 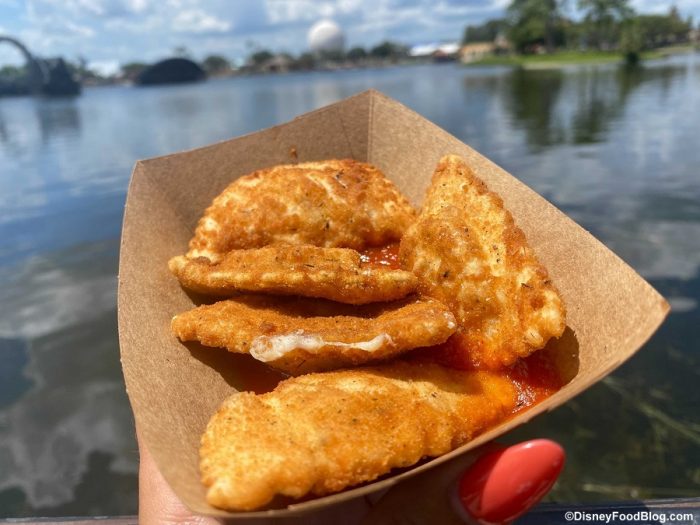 It’s an important thing to keep in mind that some items at the Food and Wine Festival can sell out throughout the day. If there’s a particular item that’s on your MUST-GET list, you may want to consider grabbing it earlier in the day.

Click here for a full review of the Italy booth at the Food & Wine Festival!

It’s a little bit of a maze over by Spaceship Earth right now due to all the construction. The locker room is currently only accessible via the back entrance over by the park exit. 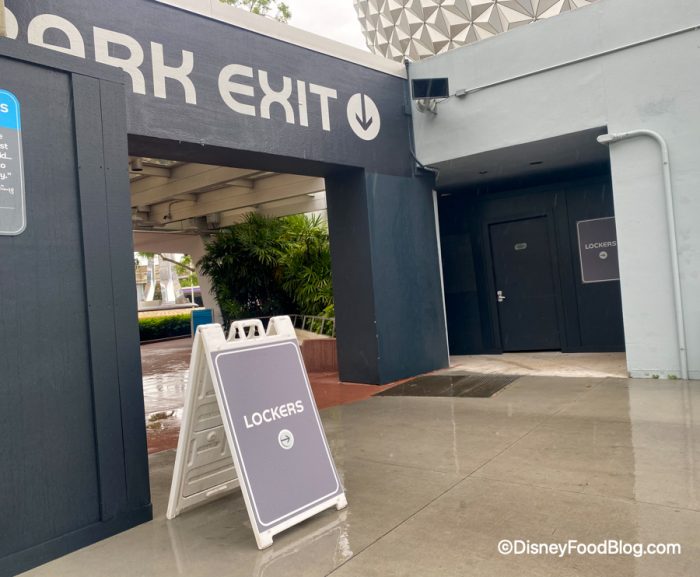 The lockers are tucked away next to the park exit!

The bathrooms on one side of Spaceship Earth are also temporarily closed, but you can access the restrooms on the opposite side of this signature ride! 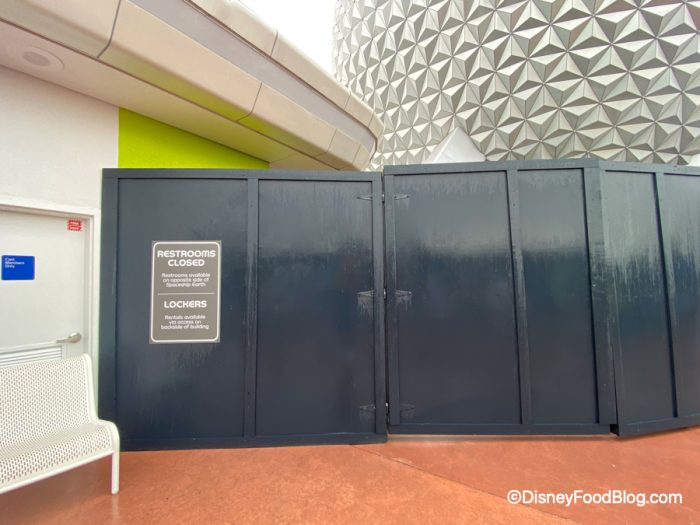 We’ll keep an eye out to see if things change, but for now, it might take a little extra navigating to get where you need to go over in front of EPCOT. Just be sure to keep that in mind ahead of your next visit.

You can find MORE Construction Updates From Disney World HERE!

In front of The American Adventure Pavilion we found a trash can, and a recycling bin, but we also spotted a mysterious green box in between them! What could that be for? 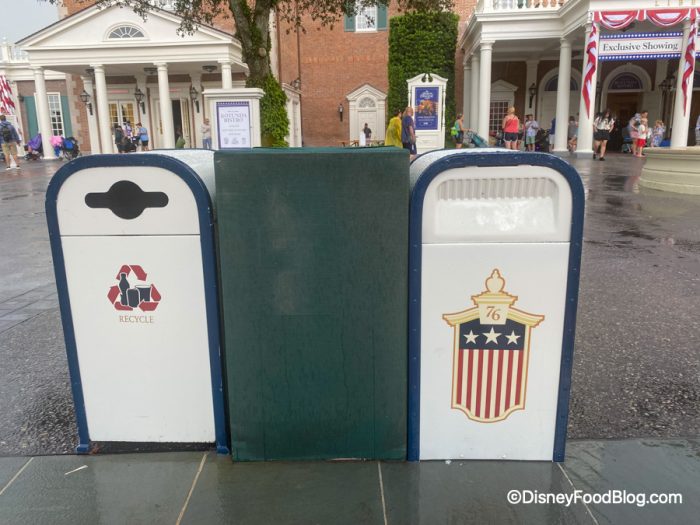 Whatever it is, it’s covered up pretty well, so we’ll have to wait and see!

Click here to see the trash cans that are getting a GLOW UP in EPCOT!

The EPCOT Food and Wine Festival started back on July 15th, but there are some festival offerings that aren’t available until October 1st! Recently, though, we noticed that the area where the Brazil booth typically would be is empty and bushes have been put up around the area. The Brazil booth is one that won’t be opening until October, so we’ll be sure to keep an eye out for more updates on that. 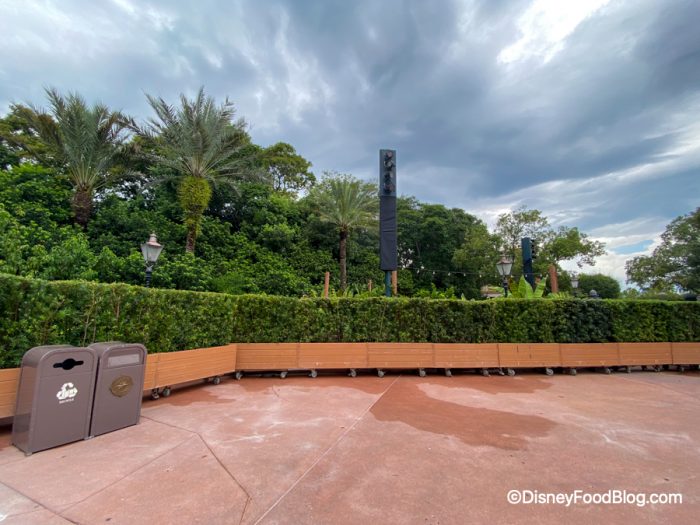 That’s it for our day in EPCOT! We’re always keeping our eyes out for more updates so be sure to stay tuned to DFB for more!

Check out the latest news on Disney World’s mask policy.

Are you visiting EPCOT soon? Let us know in the comments!

« An EXCLUSIVE Mickey Mouse Plush is Coming to Amazon — See Who Can Get It!
REVIEW: Disneyland Added BOOZE to a Delicious Frozen Treat! »