Disney World is filled with so many treats right now for the 50th anniversary, that it’s an adventure in itself to try and get through them all! 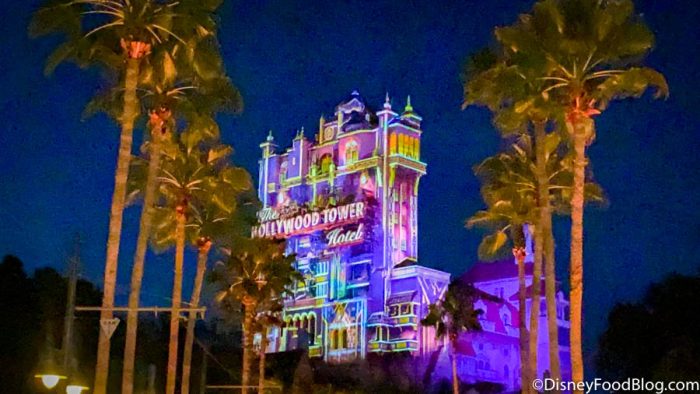 Tower of Terror as a Beacon of Magic

While you’ll find over 150 snacks and drinks across the parks and resorts, there’s something extra special about Disney’s Hollywood Studios with its Beacon of Magic and EPIC list of goodies. And, we’re here to rank all the dishes and drinks that we’ve tried in Hollywood Studios for the 50th anniversary!

We’re starting from the bottom and working our way up! So let’s get this foodie party started.

Chocolate lovers, get ready for the richest treat all around Hollywood Studios! The Chocolate Mousse is a raspberry-dark chocolate mousse, chocolate-almond cake, and a layer of hazelnut crunch with more whipped chocolate hazelnut cheesecake that is incredibly RICH. It’s almost too rich without many flavors that came through other than a lot of chocolate! Compared to the other treats that we tried in Hollywood Studios for the 50th anniversary, the Chocolate Mousse was on the heavier side without much of a balance in its flavors. 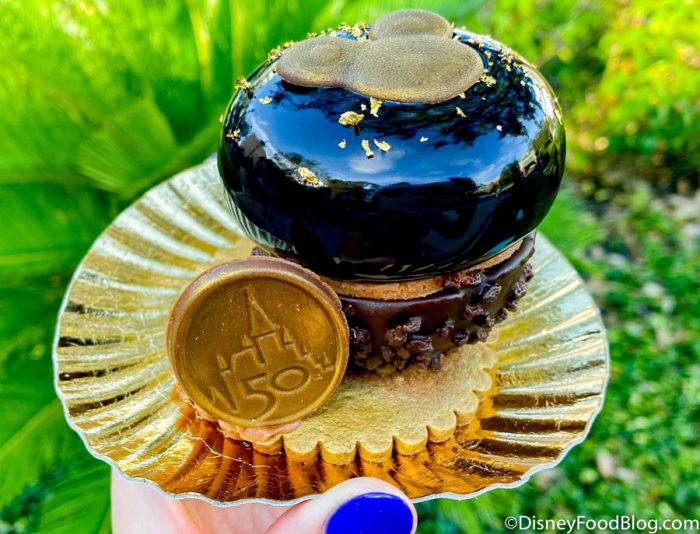 But, if you’re a big chocolate fan, you’ll want to split this with a friend! You can try the ABC Commissary for $5.49!

Read our full review of the Chocolate Mousse here!

While the Pumpkin Mousse appeared earlier in Hollywood Studios for Halloween, Disney gave it a little 50th anniversary makeover for the big event! The milk chocolate chai mousse is filled with pumpkin bread and set atop a shortbread cookie with a vanilla buttercream leaf and a chocolate stem. The pumpkin and chai are the standout flavors with a hint of chocolate to finish, which is perfect for all you PSL lovers out there! 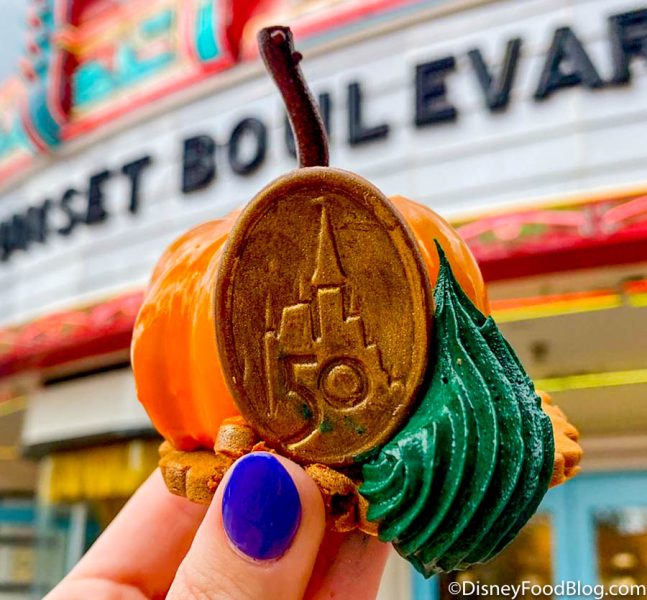 However, the Pumpkin Mousse isn’t an exclusive 50th anniversary treat, compared to the others that are unique for the celebrations. So, even though we LOVE fall flavors, you may want to pick another snack higher on our list if you want something to fit the special occasion more. You can try it at Trolley Car Cafe for $5.49 as well!

Find out the details of the Pumpkin Mousse here!

6) Shimmer Over the Moon

If that golden color doesn’t sell you enough on the Shimmer Over the Moon cocktail, then its flavor will! The sip is mixed up with Ole Smoky Apple Pie Moonshine, Amaretto, Falernum Syrup, Pineapple Juice, and Club Soda, and served with a Souvenir Glow Cube. The drink was super heavy on the apple flavor, which was perfect for fall, but it didn’t leave out that extra KICK that tied everything together! 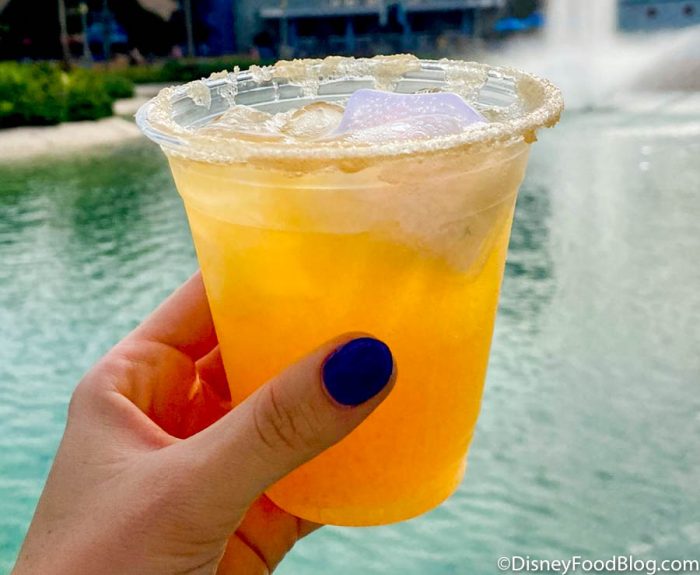 Shimmer Over the Moon

You can find it at many places around Disney’s Hollywood Studios, like the Animation Bar, Oasis Canteen, Hollywood Brown Derby Lounge, and Sunshine Day Bar for $14.

Check out the details of the Shimmer Over the Moon cocktail here!

We can’t help but love Fall flavors and the Caramel Apple Tart doesn’t disappoint! The spiced caramel-cheesecake mousse is apple-dusted in gold and served atop a cinnamon-apple tart. Since there is a layer of tart and then mousse, it’s almost like two desserts in one with a hint of cinnamon (even though we would have loved more)! 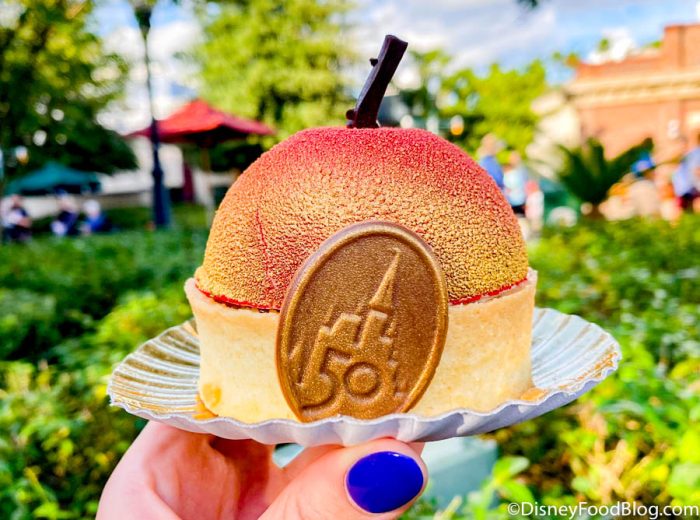 While you’re still at ABC Commissary, you can try this treat for $5.49!

Find out the details of the Caramel Apple Tart here!

Since we are celebrating 50 years of magic in the parks, it makes perfect sense to dive into a bit of nostalgia. And, the 50th Celebration Sandwich Cookie is like a PB&J sandwich in dessert form with a pretzel shortbread cookie sandwiched with strawberry jam and peanut butter chocolate fudge. Out of all the Hollywood Studios snacks, the sandwich cookie was controversial amongst our team with some of us loving it and others disliking it. So, we think you should try it for yourself to see if the flavors hold up for you! 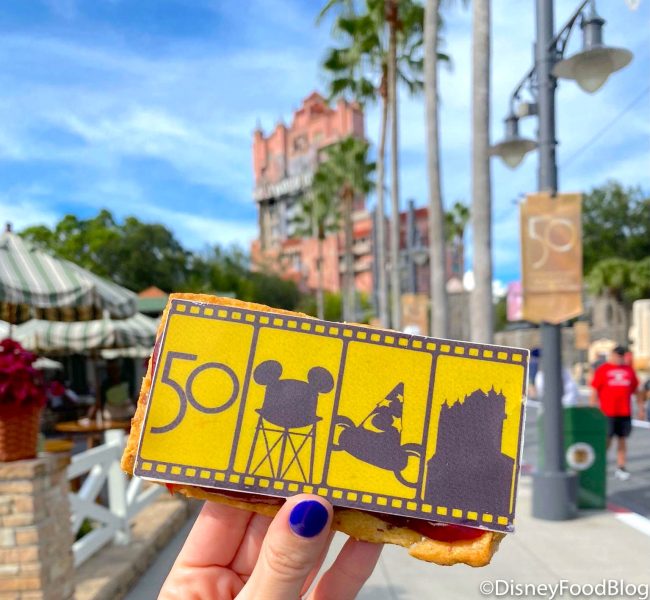 Let us know your thoughts when you try the 50th Celebration Sandwich Cookie for $5.29 at Rosie’s All-American Cafe!

Take a look at our thoughts on the 50th Anniversary Sandwich Cookie here!

We won’t pass up the opportunity for a warm and sweet funnel cake in Disney World! And, the Glimmer and Shimmer Funnel Cake is a fancy, 50th anniversary version of the Cookies and Cream Funnel Cake that’s golden, crispy, and piled with lots of toppings! You can enjoy soft-serve vanilla ice cream, gold-dipped Oreo Cookies, sprinkles, powdered sugar, and chocolate sauce on top of the funnel cake… but you’ll totally need a few friends to finish it! 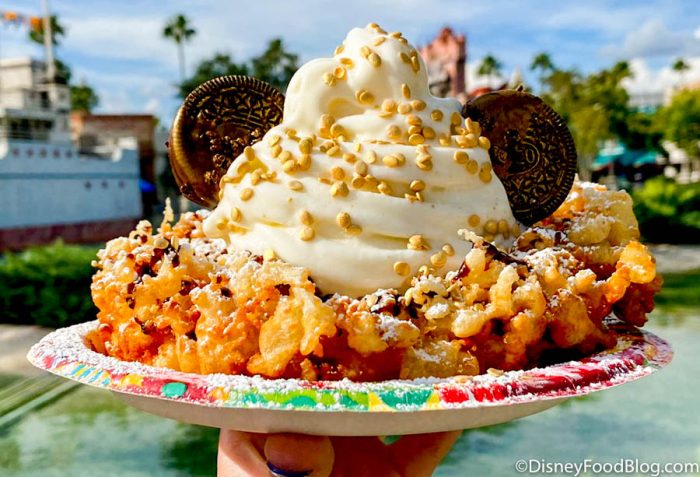 While the flavors may not be totally unique, the funnel cake doesn’t disappoint and comes in a HUGE portion (which earns brownie points for us). You can go all out with the Glimmer and Shimmer Funnel Cake for $8.49 from Epic Eats!

Read our review of the Glimmer and Shimmer Funnel Cake here! 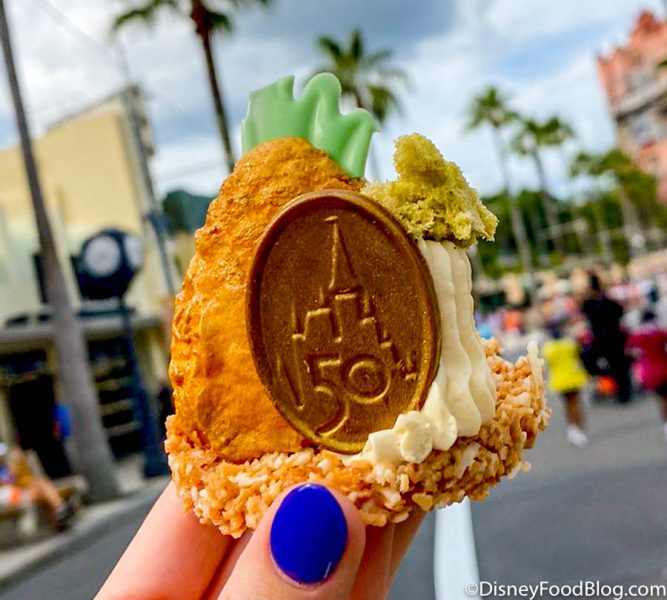 Treat yourself to a tropical treat for $5.49 at the Trolley Car Cafe!

Take a look at the details of the Glimmer and Shimmer Pineapple Mousse here!

Blondies are some of our all-time favorite treats in Disney World, so the Glimmer and Shimmer Blondie is a hit with us! The toasted coconut blondie is made with ooey gooey toffee, salted caramel buttercream, and festive gold nuggets with a balance of sweetness and saltiness that will have you wanting seconds! The portion is HUGE. So it’s great to share or to box up for later! 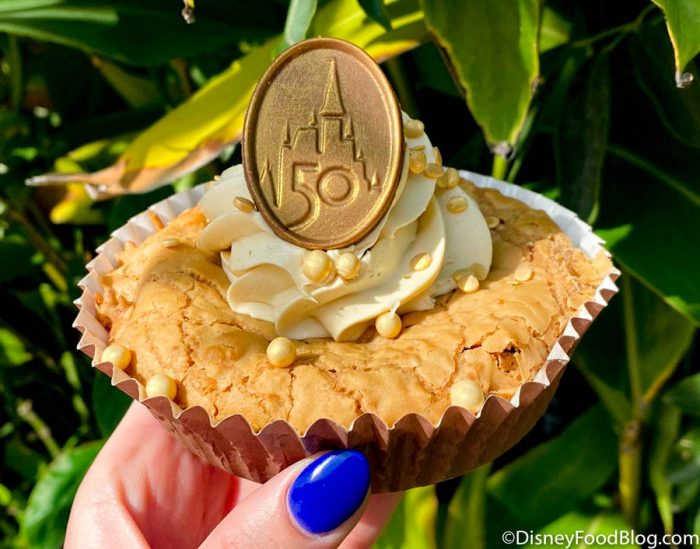 And, it’s even under $5 since you can get it for $4.49 at Fairfax Fare and the Backlot Express.

Check out the details of the Glimmer and Shimmer Blondie here!

Overall, we thought that Disney’s Hollywood Studios actually had some of the best treats across the board in the parks for the 50th anniversary. So, if you’re deciding where to do your snack crawl for the event this year, you might want to put Hollywood Studios towards the top of your list!

As we continue to make our way around the parks and resorts for the big 50th anniversary, we’ll be sure to update you on all the Disney entertainment and news you need to know. Stay tuned with DFB for the latest!

Here’s what Disney World was like inside the parks on its 50th anniversary!

What’s your favorite 50th anniversary treat in Disney’s Hollywood Studios? Let us know in the comments below!