The Disney Genie service just launched in Disney World, and now you can pay for access to Lightning Lanes (previously known as FastPass+ lanes) for qualifying rides and attractions.

The Genie+ service is $15 per person, per day for over 40 different attractions, but with Individual Attraction Selection (or pay-per-ride) you pay for each ride individually, and the pay-per-ride premium attractions are 8 of the most popular rides in Disney World. So how do you decide which rides to choose? Which rides are worth the extra cost? Well, we asked you, dear readers, to vote for which Individual Attraction Selection rides you would actually pay for!

On the day we asked for votes, we noted the cost of each ride, but remember that Individual Attraction Selection rides vary in cost depending on the day, so these prices aren’t set in stone. 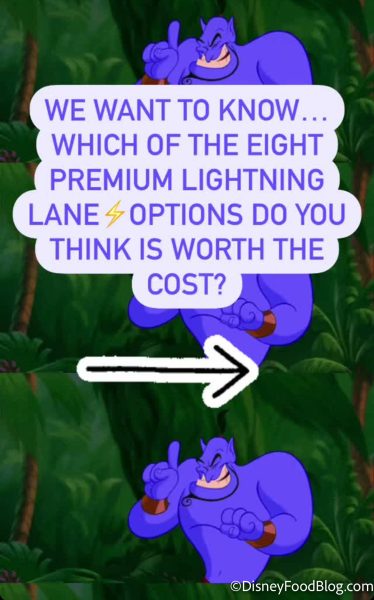 How did YOU vote?

Over 17,000 readers voted so let’s get started! We’re going to start from the BOTTOM rankings and work our way up. Do you know which pay-per-ride is most worth the cost?

Frozen Ever After wins the prize of the lowest number of votes, with 82% of our readers voting that this EPCOT ride is NOT worth the cost. On this day, Frozen cost $9 for Lightning Lane access. 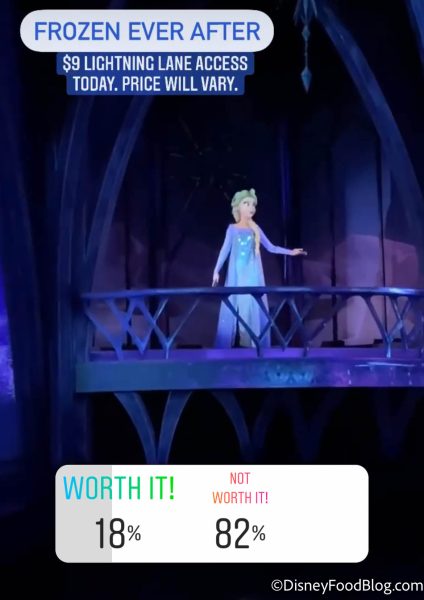 The wait time for Frozen Ever After can range anywhere from 30 minutes to over an hour, and the standby line is mostly inside the attraction building (with AC!) so it’s not THAT terrible of a waiting experience. If you’re paying for Lightning Lanes, you might want to skip this one.

Here’s a step-by-step guide to booking and buying pay-per-ride attractions!

78% of our readers voted that Expedition Everest in Disney’s Animal Kingdom is not worth paying for. On this day, the Lightning Lane cost $7. 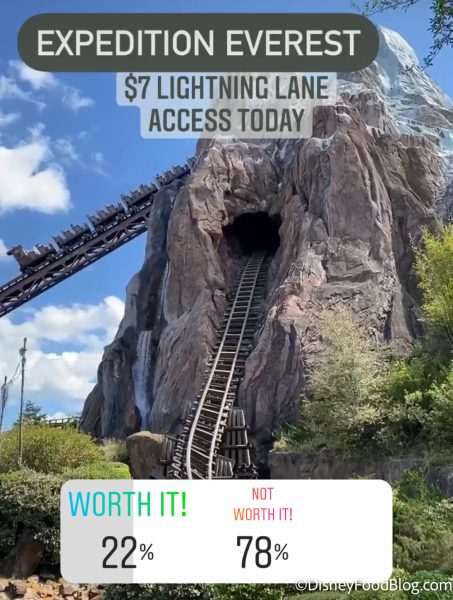 On one particular visit we noticed that the standby wait time for Expedition Everest stayed pretty consistently between 15-20 minutes. The single rider line is still available as well. So, we personally didn’t feel like this attraction was worth the cost when we paid for it.

How long would YOU wait before you PAY to skip the line in Disney World?!

Over in Magic Kingdom, Space Mountain’s Lightning Lane cost $7 this day, and 75% of our readers voted to skip it. Although Space Mountain usually has a long-ish wait, there are other attractions you might want to prioritize. Remember, you can only book 2 pay-per-ride reservations per day. 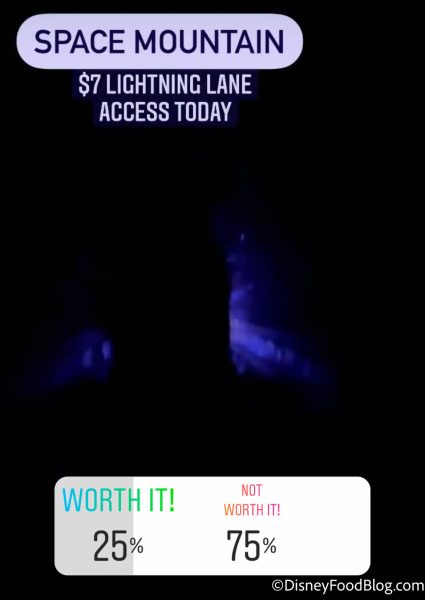 Instead of paying for some of these lower ranking rides, you can also plan to head straight there at rope drop for a chance at a shorter wait time or you can always just go through standby line.

Here are the prices for pay-per-ride attractions in Disney World!

At $8 for Lightning Lane access, Mickey & Minnie’s Runaway Railway in Disney’s Hollywood Studios ranks somewhat low on the priority list. 69% of our readers voted that it’s not worth paying for. 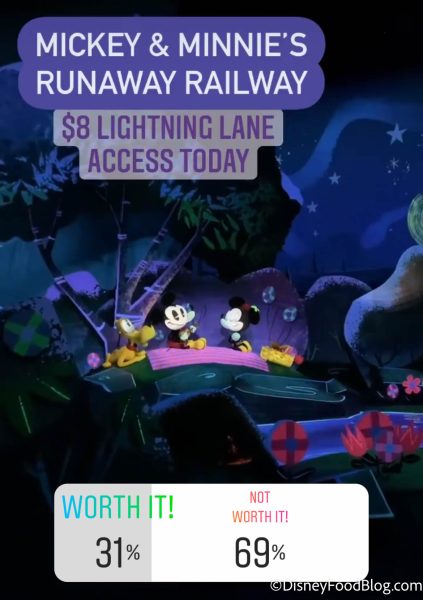 While Runaway Railway can climb to high wait times, it’s often somewhere between 45 to 60 minutes. This ride debuted in Hollywood Studios in 2019 and replaced The Great Movie Ride, but it seems that most of our readers don’t think it’s worth the cost.

What’s the difference between Disney Genie+ and pay-per-ride?

The Seven Dwarfs Mine Train is one of the most popular rides in Magic Kingdom and it almost always has a long wait. Still, it’s kind of a short ride for the wait, and 67% of our readers said it’s not worth it to buy. On this day, the Lightning Lane cost $10. 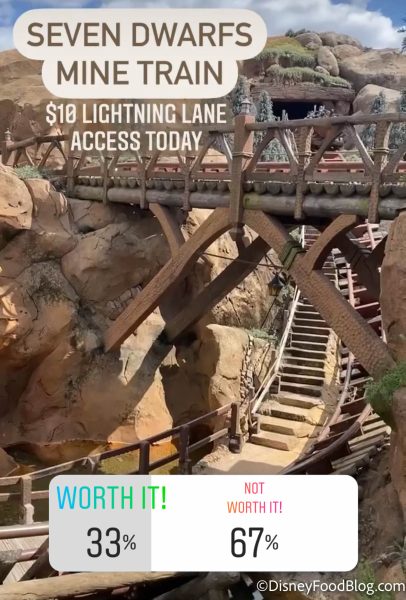 Most of the queue for Seven Dwarfs is outdoors, so on a hot day it might actually be worth it to take the Lightning Lane, especially if you have kiddos who love this family friendly ride.

How many rides can we do in a day with Genie+ and pay-per-ride?

And we finally get to a ride voted worth it! With an $11 Lightning Lane, Avatar Flight of Passage in Disney’s Animal Kingdom was voted worth it by 52% of readers. 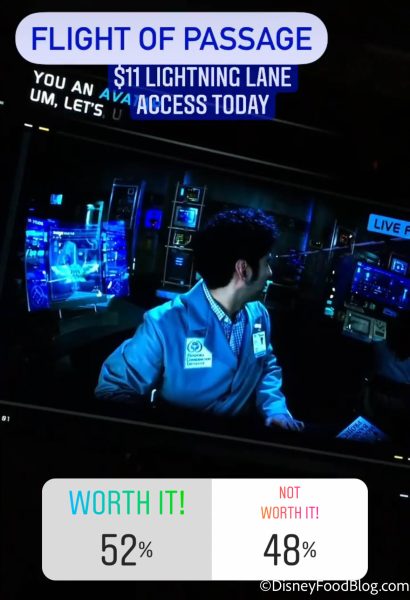 Flight of Passage has a notoriously long wait time in Animal Kingdom, so this is one that might actually be worth it to skip! You can, uh, fly through Pandora on the back of a banshee without having to wait 1+ hours in line.

A look at wait times with Genie+ and pay-per-ride in Disney World.

EPCOT’s newest ride, Remy’s Ratatouille Adventure, was voted worth it by 58% of readers! This ride, featuring our favorite rat Remy from Disney and Pixar’s Ratatouille, was $9 for Lightning Lane access on this day. 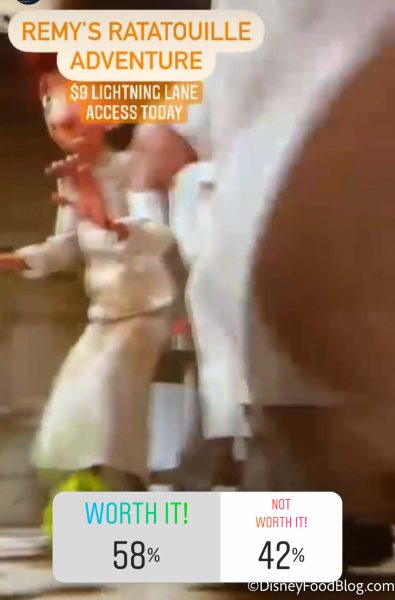 1 — Star Wars: Rise of the Resistance 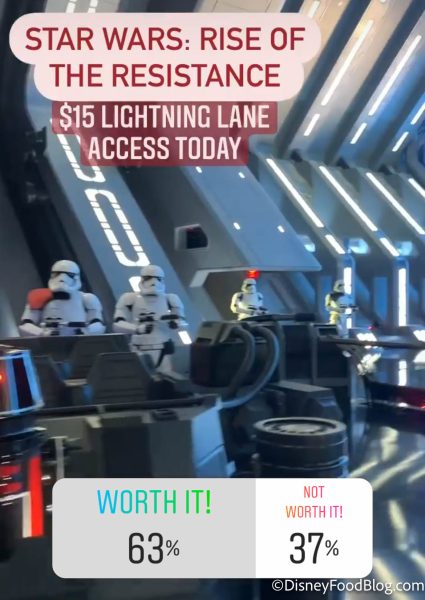 See the crowds from Rise of the Resistance’s standby line!

So what do you think? Do you agree with how our readers voted for these premium Lightning Lanes?

Keep reading DFB for more Disney World news, and check out our Instagram for reader polls if you want to be part of the next vote!

Did you vote? Tell us in the comments!