Here at DFB, our team has had a plethora of embarrassing moments in the parks.

We’ve had some weird days in Disney World.

Whether it be wardrobe malfunctions, snack spills, or faceplanting in the middle of the walkway, we’ve been through quite a lot that we could tell you about. But, as they say, “a picture is worth a thousand words.” So today, we’re sharing our most embarrassing photos from Disney World!

Truth be told, we reached out to the team for photos and most of them were WAY tamer than we thought!! But still, in all their glory, here’s some of our team members’ silliest Disney moments.

Most Disney fans out there come across an embarrassing ride photo every once in a while. However, the ones that our team sent in are some real doozies! Up first we have a coworker who really hates getting wet…can you guess which one she is? 😜 Unfortunately, this tactic didn’t work and she still got more soaked than any other person on the boat…Splash Mountain is mean like that. 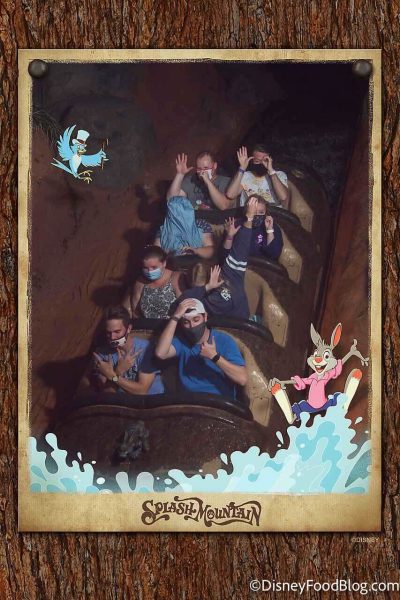 Splash Mountain is honestly just asking to make funny ride photos. One of our Junior Editors thought she was going to bless the picture with her ridiculous shenanigans…only to be upstaged by the guy in the American flag shirt. Unfortunately, we’ve been outdone! 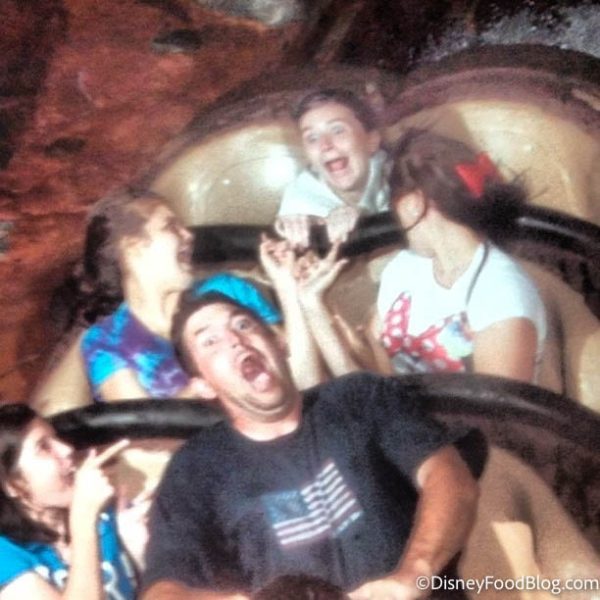 We have a winner.

Here at DFB, we’re pretty frequent Disney visitors. One of the perks that come with that is getting to know where all of the ride cameras are located (or so we thought!). We were so confident that it was on the left side and boy were we wrong. That’s embarrassing! Nothing like playing to the (wrong) camera!! 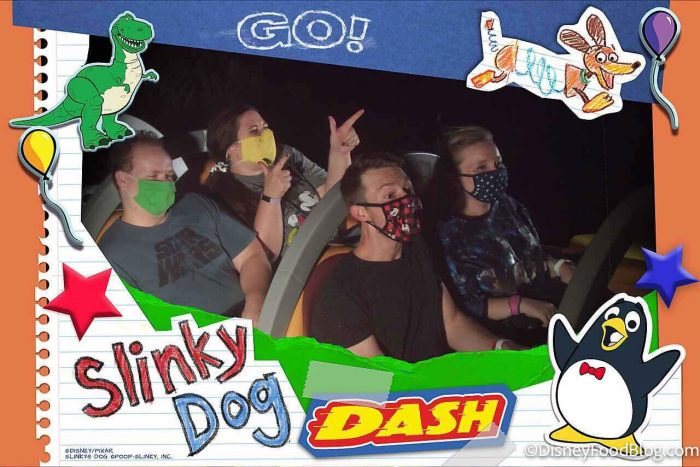 So close and yet so far.

But even though we’ve been caught in some embarrassing scenarios by Disney World ride cameras, those aren’t all the photos we have in our digital scrapbooks of awkward memories!

We’ve had some pretty uncomfortable run-ins with Disney characters over the years, typically thanks to our own doing. We like to caption the following photo “when you realize that it’s not really Adam Driver in there.” Rough day. 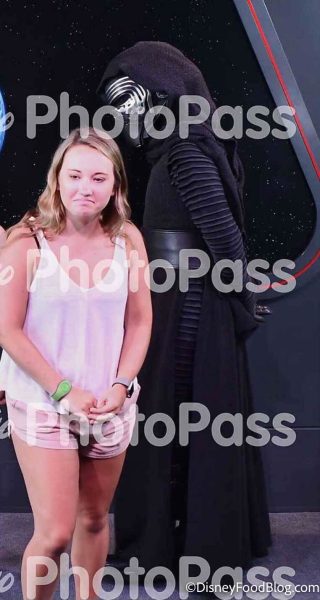 Have you ever loved something soooo much but it didn’t love you back? That’s the case with Drizella and the daughter of one of our reporters. Clearly, they’re both having very different reactions to this encounter. 😂 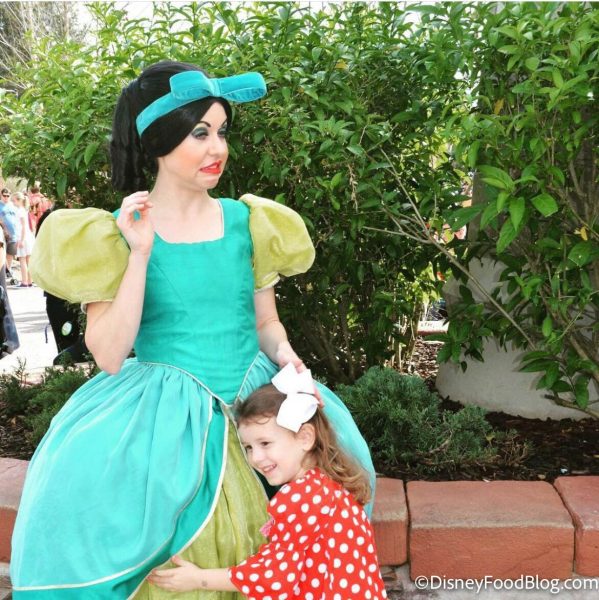 But sometimes, we’re not quite sure WHAT happened at some of those character interactions, especially when we were children ourselves. Remember that weird TV show from the 80s called Adventure of the Gummi Bears? Well, the characters from the show met in Disney World and Disneyland for a little while. It was a weird time, the 90s. Here, one of our editors was laughing? Screaming? Crying? All of the above? 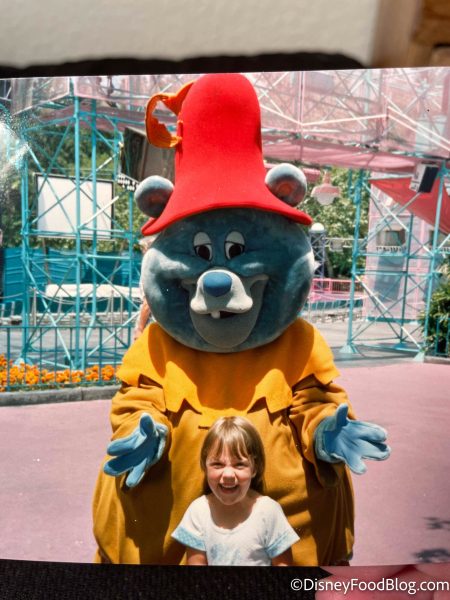 Not the happiest we’ve ever been.

And sometimes, it’s not so much the characters as it is our human propensity for being super awkward in photos. One of our coworkers shared this picture of herself stating, “I have no explanation for the shorts.” We don’t know about you, but we’re definitely okay if that look doesn’t come back in style. 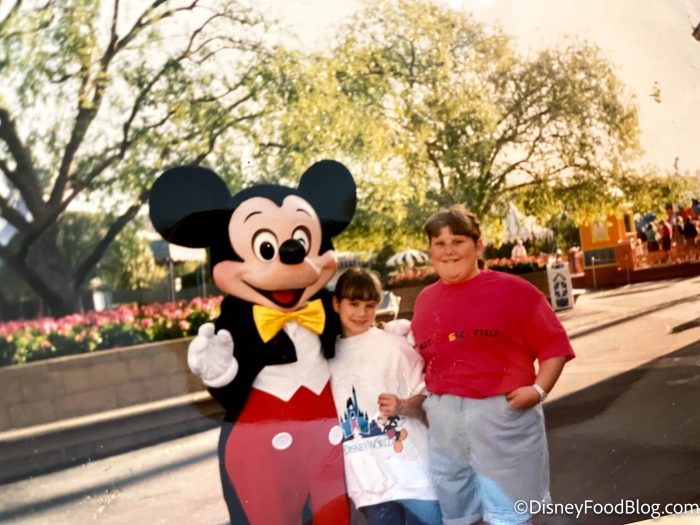 It’s pretty much universal to go through a phase where you think you’re “hot stuff” (many of our team experienced that in the 90s!). While those pics do make us cringe these days, at least they provide some entertainment for our family and friends!

And speaking of looking back and cringing, let’s discuss throwback pics in general. Here’s one from Disney World’s 15th Anniversary, when they had a giant (square?) birthday cake by the EPCOT entrance plaza. We have nothing to say except that it was the 80s…all of our photos were awkward back then. 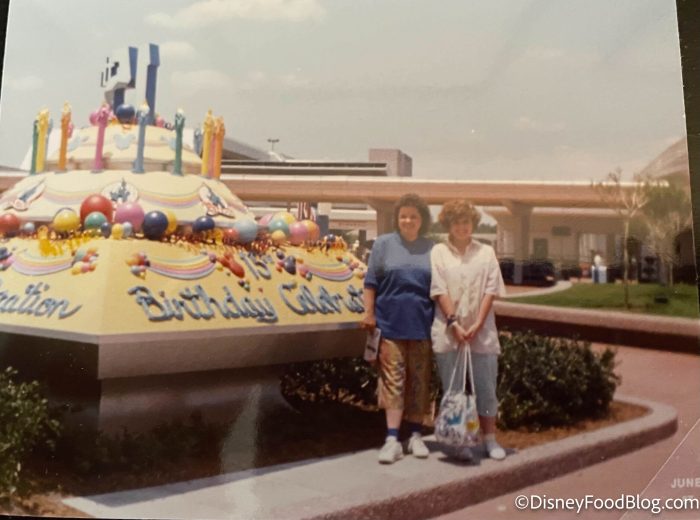 Have you ever done the photo studios in Disney World? Well, one of our coworkers got some really fun and umm…unique snapshots out of it. 😅 Back when the Star Wars prequels were hot stuff, it was all the rage to dress up like Padme. We just didn’t realize Natalie Portman would be watching us do it like she’s Mufasa in the sky! 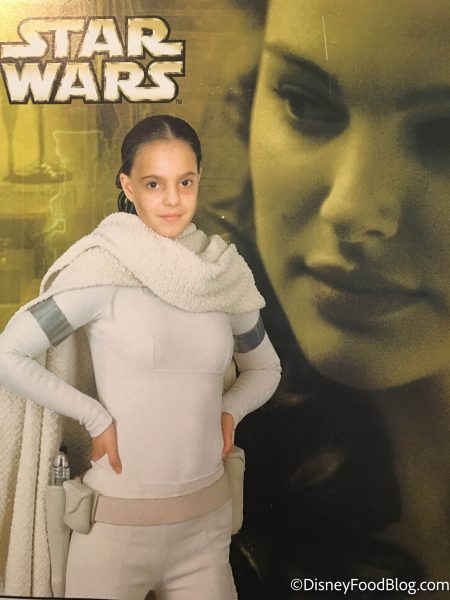 Natalie Portman is watching over us.

Disney called it a “Pirate Party” and obviously, we did NOT agree. You know those kids that you see in Disney World and they are definitely not digging the vibe? Well, it turns out that even those kids can grow up to be professional Disney superfans. Parents, don’t lose hope! 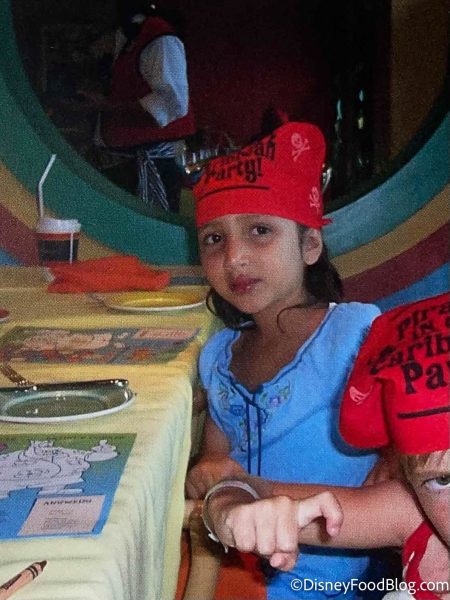 The 2000s were a weird time of duck faces and peace signs, all of which were gloriously documented through the new feature we called social media. Yeah…we’ll never live this one down! (At least we got a pic with Ducky Momo — 10 points to whoever can tell us where he’s from!) 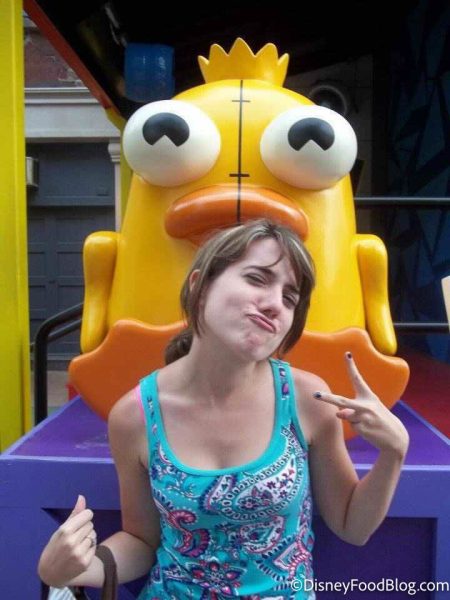 Is that THE Ducky Momo?!

And speaking of the 2000s — did we mention that we were the epitome of style? One of our writers shared this photo from her family’s visit to the Spirit of Aloha dinner show. Would you just check out those shades?! 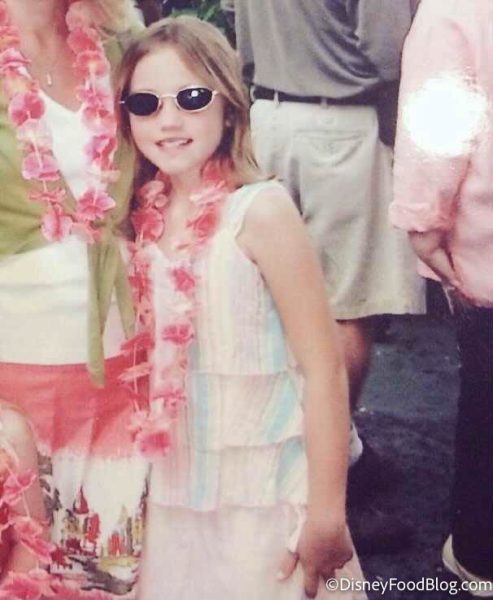 Believe us, we were hot stuff.

We still don’t understand how this look didn’t immediately qualify her to be a Disney Channel star. They really missed out!

Even the self-proclaimed experts aren’t prepared for EVERYTHING in Disney World. Apparently, this picture was included in that. Based on this photo, we’re not convinced our editor had ever seen a camera before. 😂 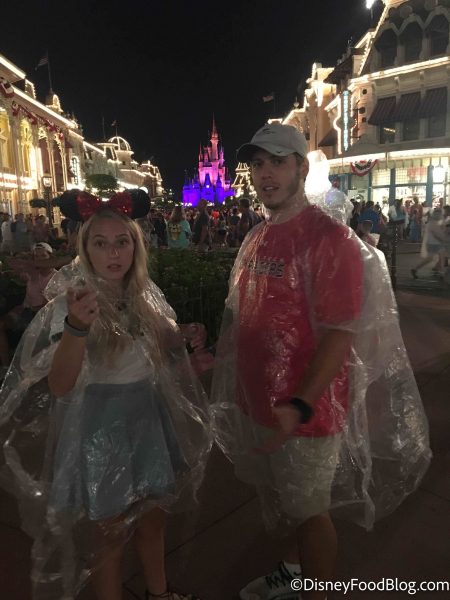 Another thing we weren’t expecting? A pandemic, that’s for sure. But now, our social media manager has this lovely photo to show her grandkids one day. Ahh, romance. (Yes, the PhotoPass photographer actually TOLD them to do this.) 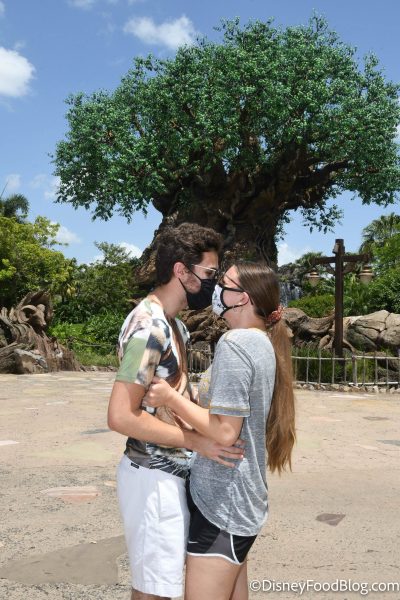 Pandemic in one picture.

Ya know those selfies that you took that stay buried on your phone until your coworker asks to see embarrassing pictures? Well, don’t show them to her because she WILL use them in her article. (Muahahaha! *evil laugh*) 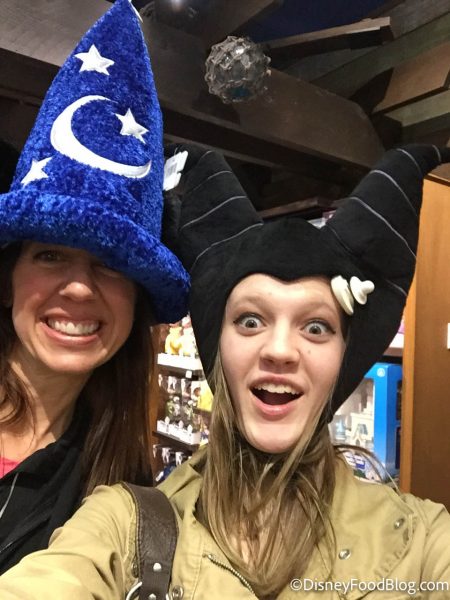 She asked him to bring the umbrella. He swore it wouldn’t rain. This is the TRUE “tale as old as time.” Pretty sure we’ve all been caught looking like this in Disney World at some point or another! 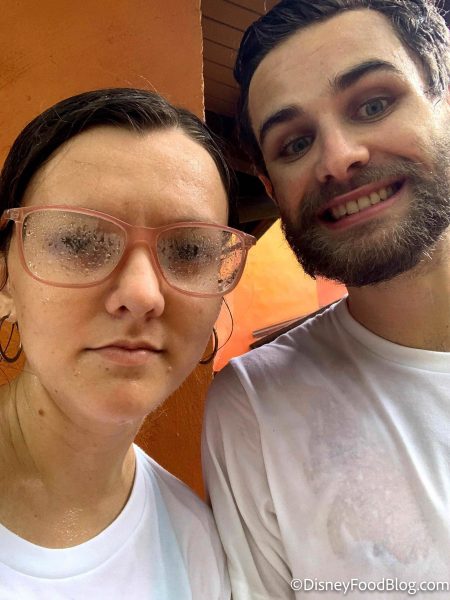 When it rains, it pours.

And speaking of unexpected weather…Florida actually gets cold in the winter sometimes — a fact that our editor didn’t consider when packing for her trip that went from the 70s in January to a HIGH in the 30s! WE KNOW, WE KNOW — we tell you ALL THE TIME to pack layers and prepare accordingly. This editor is…stubborn. She only packed shorts and it shot down to below freezing. Everyone: don’t be like this editor. 😉 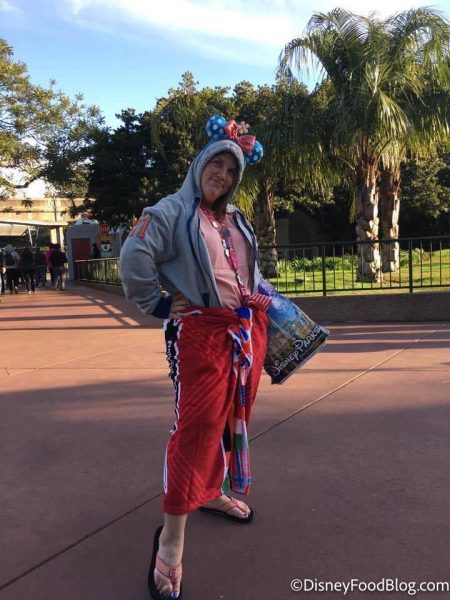 Who wore it better: our editor or Joey?

Yes, that’s an EPCOT throw blanket fashioned into a…skirt? Yes, that was a CHOICE. Yes, she’s wearing sandals in 30-degree weather (sorry, AJ!). Basically look at this photo as an all-around “what NOT to wear to Disney World!” Let this be your lesson to pack layers in your suitcase so you don’t have to buy gift shop outfits and look like that moment in Friends when Joey put on every piece of clothing that Chandler owned.

And that’s a wrap on some of our team’s most embarrassing Disney World photos! We hope you enjoyed this slideshow of weird and that it reminded you that even the experts have unfortunate experiences in the theme parks!

What’s your most embarrassing photo from Disney World like? Tell us in the comments!