Welcome back, DFB friends! We’re here with another What’s New at EPCOT! 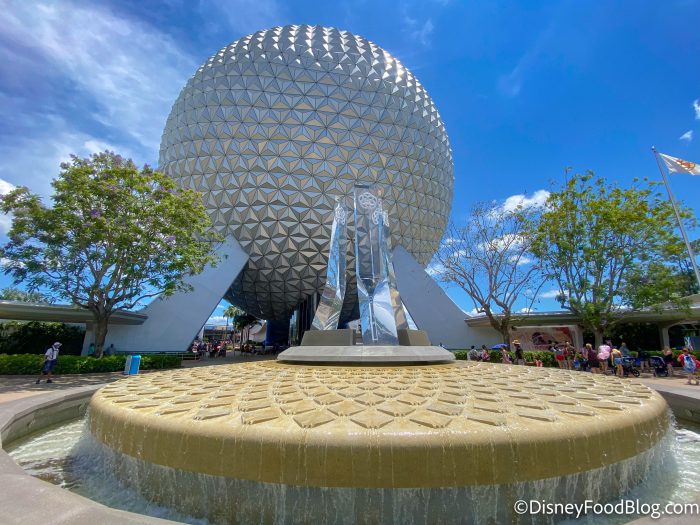 Between the EPCOT Food & Wine Festival kicking off in just a few days, new merchandise arriving in the park, and more construction updates on ongoing projects, we have a lot to cover! So, what are you waiting for? Let’s jump right on in!

END_OF_DOCUMENT_TOKEN_TO_BE_REPLACED After trying a few menu items at a Food & Wine preview and seeing a lot of chef themed merch, we heard the announcement of the new Donut Box baking over in Future World AND the festival additions to Cool Wash! And, now, we’ve got a little bit of insight into the menu items coming to the booth.

END_OF_DOCUMENT_TOKEN_TO_BE_REPLACED

Hooray! We’re happy to share the great news that the 2013 Epcot Food and Wine Festival Booth Menus are now available! As always, we have individual pages created for every single booth, including the menu and food photos of repeat items and even some brand new dishes!

Head over to our 2013 Epcot Food and Wine Festival Booth Menus and Photos page to see the full booth menus! In the meantime, I’d love to share with you some of the brand new menu items at this year’s festival…

Some new additions to this year’s booths are:

The South Korea Marketplace brings another great option with a really fun addition, the Kimchi Dog with Spicy Mustard Sauce. As always, you can visit our Epcot Food and Wine Festival index page for ALL updates at any time.

We’ve got ALL THE CONFIRMED 2013 EPCOT FOOD AND WINE FESTIVAL BOOTHS for you today!!

Be sure to check out our 2013 Epcot Food and Wine Festival Booth Page for updated menus, food photos, and more as the Festival gets closer! The New Zealand Booth is back this year!

We have also confirmed that a brand new dessert will be coming to the Australia Booth — a Pavlova with Fresh Driscoll’s Berries and Vanilla Custard. And a new kids’ dessert will pop up at the Desserts and Champagne Booth — a “frozen s’more” smoothie! News From the Epcot Food and Wine Festival Preview! Dole Whip Debuts at the Epcot Food and Wine Festival!

Dole Whip Is Coming to the 2013 Food and Wine Festival!

That’s right! It was such a huge hit at the Flower and Garden Festival earlier this year that it’s back by popular demand.

There’s one major change, though — this time around, the Dole Whip will be orange!

And there are plans to serve with a liqueur once more. While the flavor profile isn’t finalized, I can tell you it’s going to be a very delicious addition to the enhanced Food and Wine Festival Menu at the Refreshment Port!

I did get the chance to try a couple of the new (and returning) items for this year! Take a look!

The Scotland booth will be debuting at this year’s festival!

We now know the menu, and we are also getting a sneak peek of the END_OF_DOCUMENT_TOKEN_TO_BE_REPLACED

Thanks to Stitch Kingdom for tipping me off to some very cool news for my fellow Epcot Food & Wine Festival fans! This year, Disney’s created videos giving sneak peeks of seven of the World Showcase booth menu items — including two brand new-to-the-festival items!