Konnichiwa from the 2020 Epcot International Festival of the Arts! 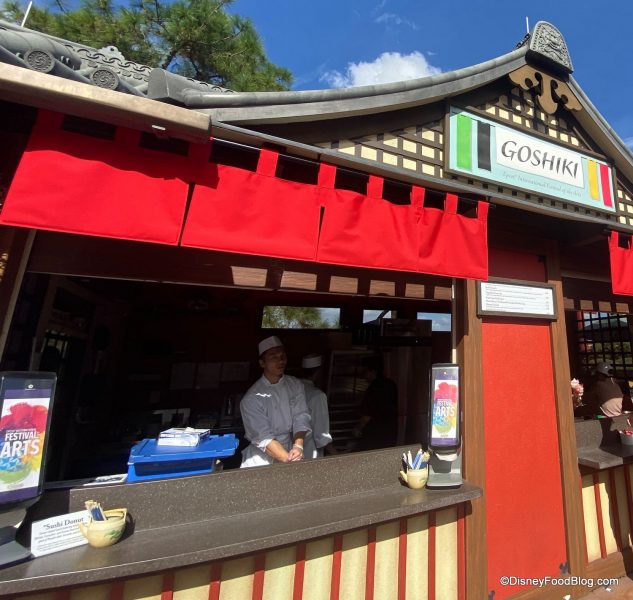 We’ve been giving you the details about this year’s festival as we’ve taken you LIVE around the World Showcase and other spots in the park. But, now we’re taking you to one of the cutest (or most kawaii in Japanese) booths open now through February 24th.

The Goshiki Food Studio, which was formerly known as Takumi Table, is basically serving up edible works of ART for the festival. (What else can you expect from such a creative country like Japan??) 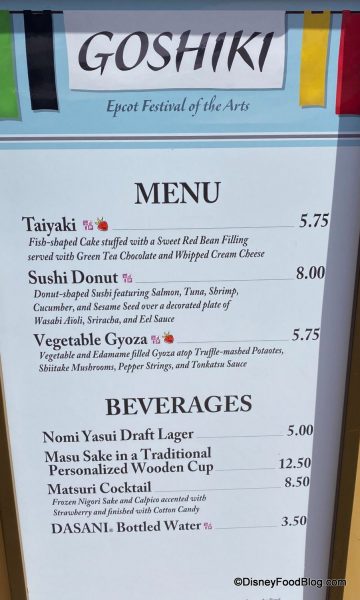 The Taiyaki, which is a Fish-Shaped Cake stuffed with a Sweet Red Bean Filling and served with Green Tea Chocolate and Whipped Cream Cheese, is back again this year for $5.75! 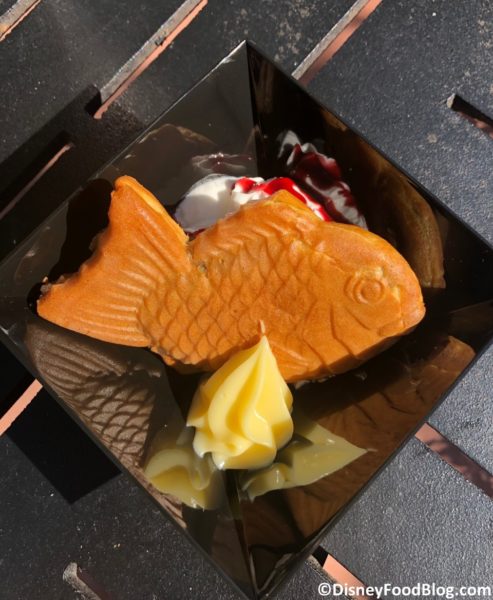 The Sushi Donut is also returning with a slight variation from previous years for $8! This time around, the Sushi Donut is made with Salmon, Tuna, Shrimp, Cucumber, and Sesame Seed and then decorated with Wasabi Aioli, Sriracha, and Eel Sauce. 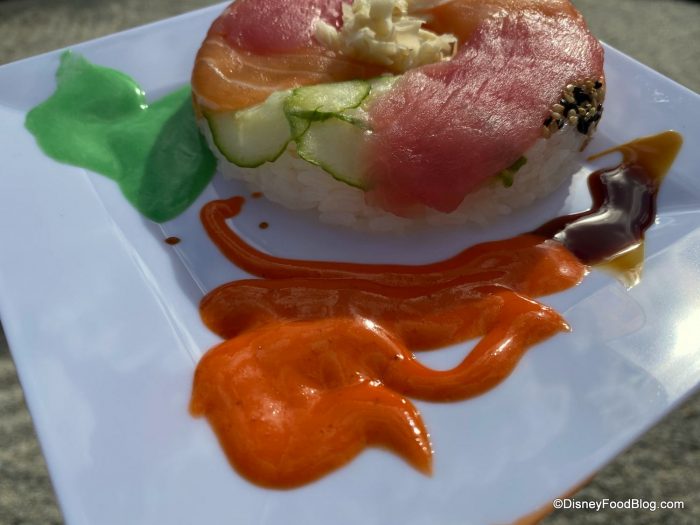 And, we are welcoming the changes with open arms! The sauces on the Sushi Donut are wonderfully spicy, especially when they’re mixed together. They make the sushi melt in your mouth (which is honestly the best way to eat it). While you’re eating, you can also notice how colorful the Sushi Donut is! This is a reflection of the booth’s name, Goshiki, which means five colors (Disney thinks of everything!!). 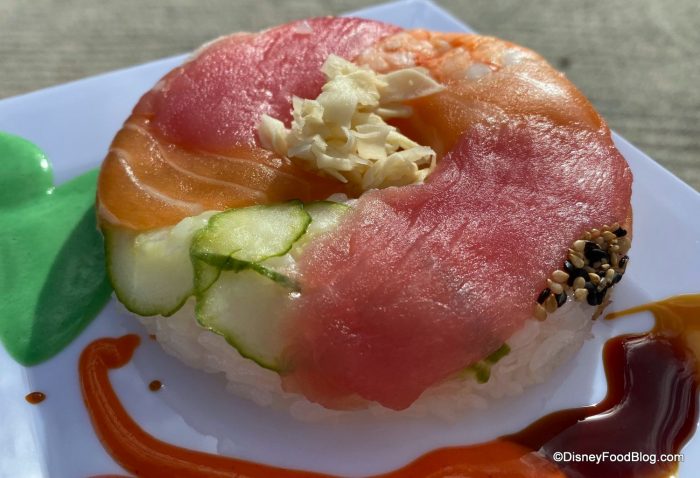 New for this year, the Vegetable Gyoza is filled with Vegetables and Edamame and sits on top of Truffle-mashed Potatoes, Shiitake Mushrooms, Pepper Strings, and Tonkatsu Teriyaki Sauce. Although we love the teriyaki on this dish, the truffle-mashed potatoes really make it outstanding. The flavors are all so different, but blend together (making us want to grab another round)! 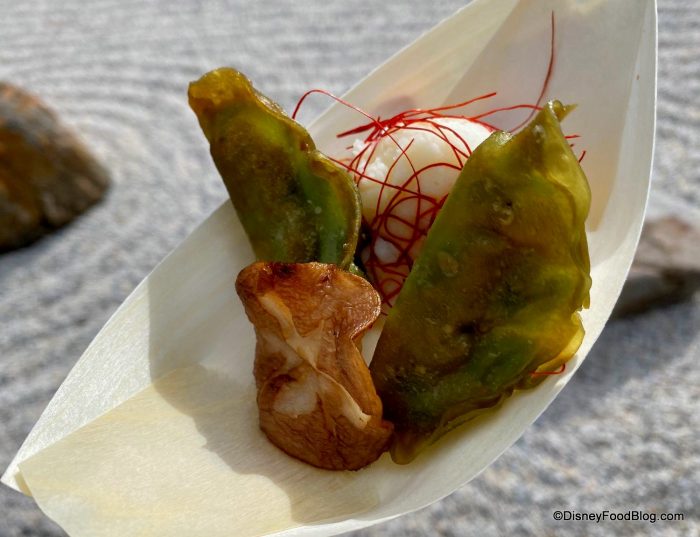 You can wash all the eats down with beverages like the returning Masu Sake in a Traditional Personalized Wooden Cup ($12.50) or the Nomi Masui Draft Lager ($5)! If you love beer like we do, this lager is crisp and easy to drink. 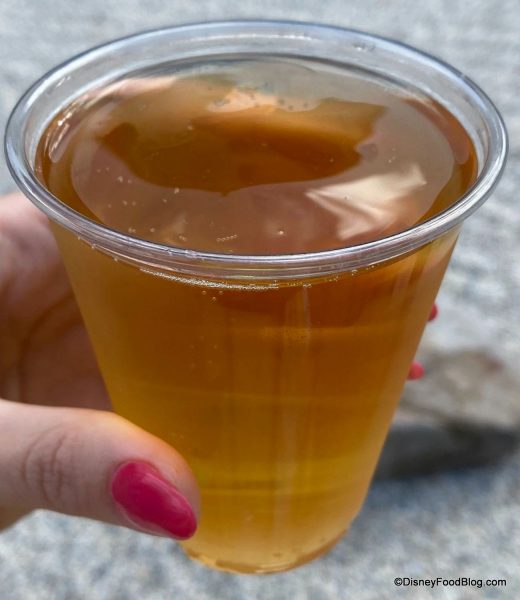 Buuut, if you’re looking for something on the sweeter side, you can snag the Matsuri Cocktail instead for $8.50! The boozy beverage features Frozen Nigori Sake and Calpico with a Strawberry Swirl and Cotton Candy on top. 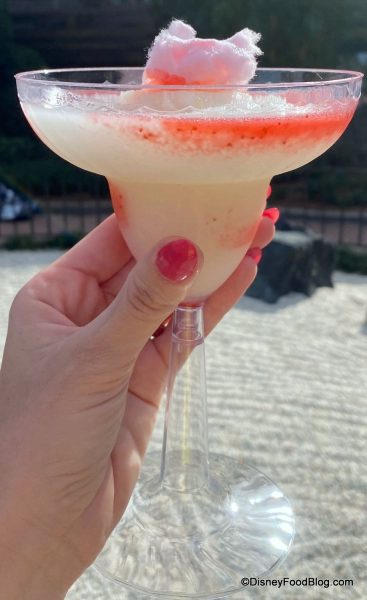 Even if you aren’t a huge fan of sake, this cocktail isn’t overly sweet! It balances the sake flavors with the Calpico and Strawberry Swirl to round the drink out. But, there’s also the Frozen French Martini at L’Art de la Cuisine Française if you aren’t feeling the sake! 😉

We think that the Goshiki Booth has created a variety of eats and drinks for most palettes at this year’s Festival of the Arts. The food is fun and colorful and is a great break away from the more sweet items throughout the festival.

Check out the rest of the food booths and menus at the 2020 Epcot Festival of the Arts here!

Want to Learn MORE About the EPCOT International Festival of the Arts?

What’s your favorite thing to eat or drink at this year’s festival? Let us know!