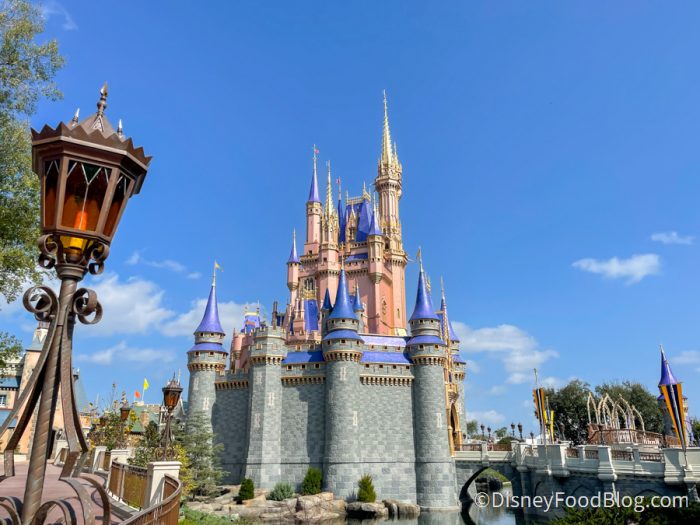 Although it was a little stormy last night, we had gorgeous blue skies at Disney World today! So come along with us for a beautiful day at Magic Kingdom, Disney’s Hollywood Studios, and EPCOT!

Does that music give you goosebumps every time like it does us? Good morning, Main Street, U.S.A.!

And the view from here is BEAUTIFUL! The new castle colors have really grown on us.

What a beauty! 🏰 Are you liking the new colors? pic.twitter.com/xBMx31HDr4

While we were admiring the castle’s beauty, we noticed that the mailboxes have returned to Magic Kingdom! It’s time to go send some postcards to our friends and family! 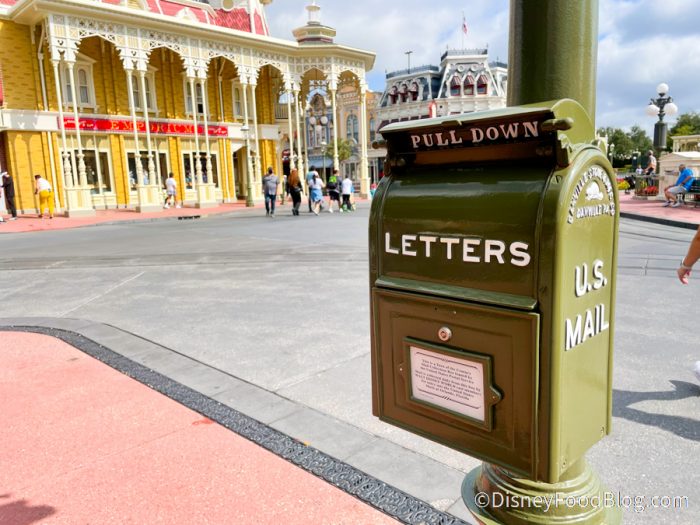 But wait, what’s this? It’s the Mickey Mouse and Friends cavalcade. Oh, boy! Did you see that? Minnie waved at us! She’s such a style icon!

We decided to go take a peek into Tomorrowland. Anyone up for a ride on the Astro Orbiter? 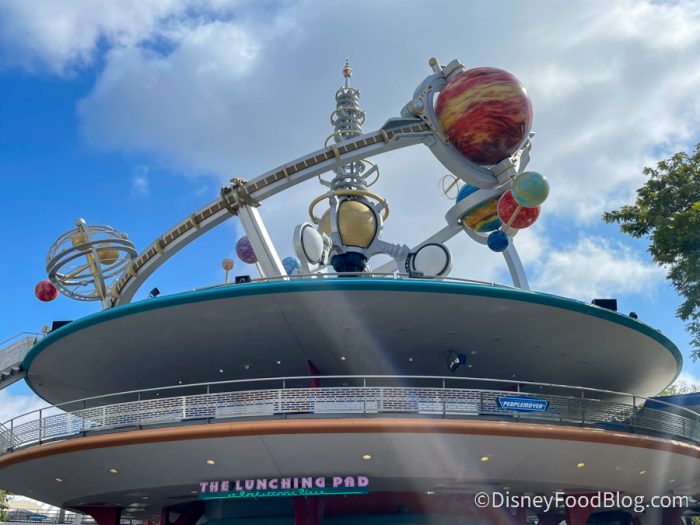 No? How about Space Mountain? 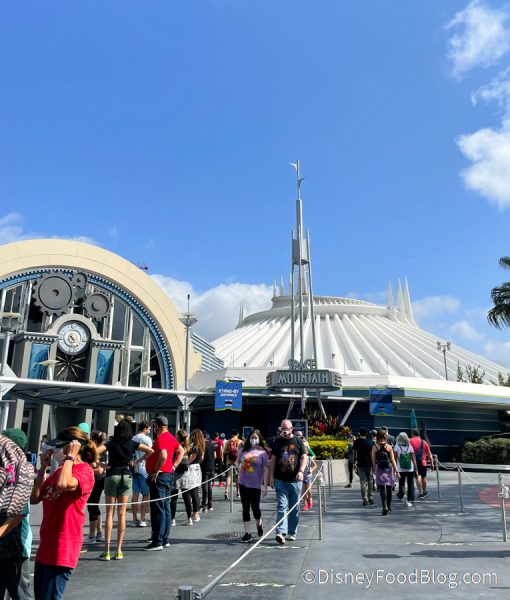 Or how about heading over to Fantasyland to watch guests on the Seven Dwarfs Mine Train in SLO-MO! Soooooo…cooooollllll… .

After all that excitement, it’s time to take a moment to wave hello to Rapunzel in her Tower (yes, we know she’s not in there anymore, but we like to pretend she’s going to let her hair down for us so we can climb up!). 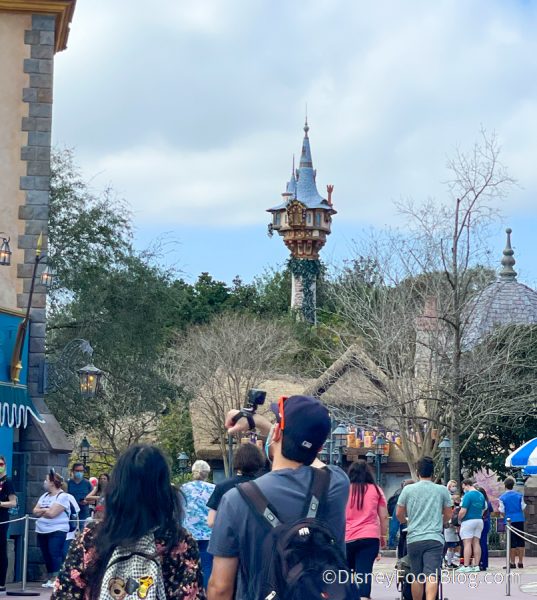 Over in Frontierland, we were treated to some awesome music by the Main Street Philharmonic!

And we will NEVER not stop to say hello to Chip ‘n’ Dale!

We totally looped back around to admire the castle again. What can we say? We just can’t stay away! Can you blame us?

We also had a reporter at EPCOT today, so let’s check in there for some more fun!

We’ve got another reporter headed into Epcot! pic.twitter.com/mRpjzg9Arr

There’s that big beautiful ball we love — AND that new fountain that we just can’t get enough photos of! It’s SO photogenic! 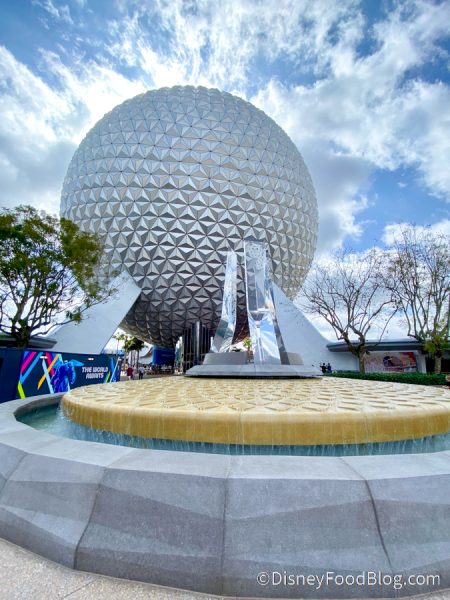 Remember how we always say to look down? That’s even more important during the EPCOT Festival of the Arts because the chalk art is INCREDIBLE! We love the 3-D effects of this piece! 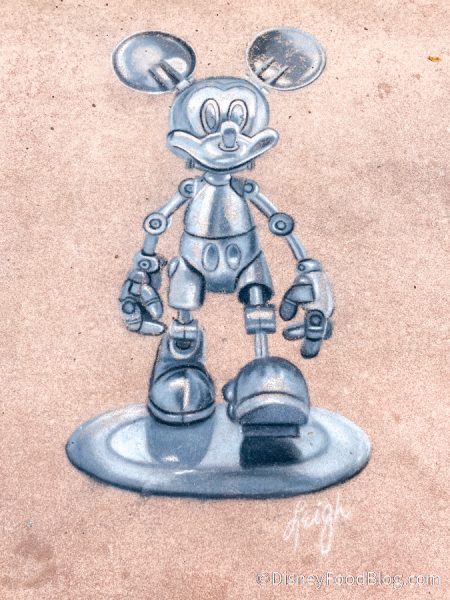 And there’s just so much great art to see! This Soul art is set up that you can stand on one of the floating piano keys with Mr. Mittens!

What’s been your favorite chalk art at Epcot? #artfulepcot pic.twitter.com/8t4TdAZ4Ut

After admiring all the great art, we headed into World Showcase, and Mary Poppins was there to greet us at the U.K. Pavilion! She told us that Bert was around working on his own chalk art. Say what?

We love chatting with Mary Poppins! She said to keep an eye out for Bert working on chalk paintings. 🥰 pic.twitter.com/wMVKOovJUR

This year’s festival might be a little more subdued than last year’s, but there is still a lot of great entertainment to watch. This guy is totally defying gravity! Like how does he do that?

After being completely wowed, we saw that Pooh was out trying to catch those pesky butterflies again. Silly old bear! 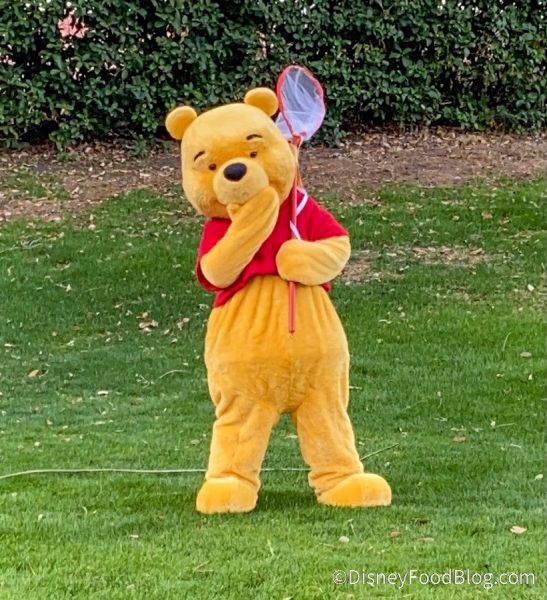 We could wander around World Showcase for days. Like seriously. We love all the details at the Germany Pavilion that makes us feel as if we’re literally walking around a real Bavarian town. And here, it’s Oktoberfest year-round! Beer and pretzels for everyone! 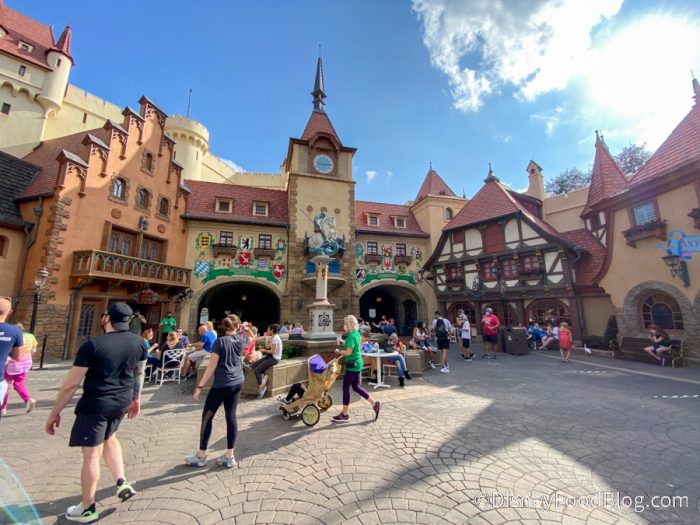 We also love the vibrant decor in Morocco. This pavilion is SO underrated! 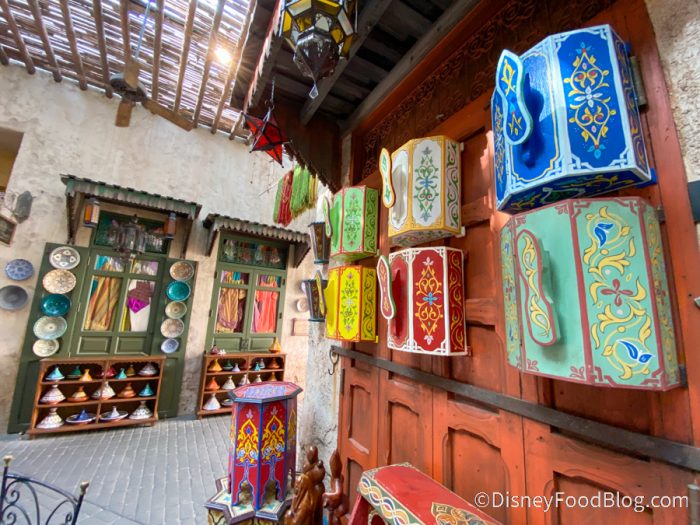 While we were wandering around and minding our own business, we ended up spotting a NEW Hidden Mickey today at EPCOT! And it’s so cool — the TIRES on Mickey’s vehicle have little Mickeys on them!

We love the Hidden Mickey we spotted today! pic.twitter.com/GdsvOKRrma

One of our reporters eventually hopped over to Disney’s Hollywood Studios! Yes, we are pretty happy that park hopping has returned! Hurray for Hollywood!

Did you know that the Chinese Theater in Disney’s Hollywood Studios is almost an exact replica of the one in the real Hollywood? We love all the little details on it, even if we still miss The Great Movie Ride. 😔 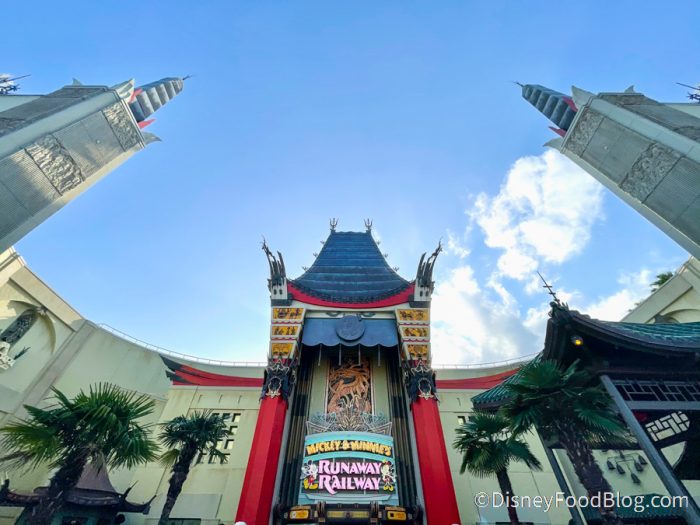 After mourning the loss of The Great Movie Ride, we headed over to Star Wars: Galaxy’s Edge to see what was up on Batuu. It’s feeling a little empty today — we guess the First Order ran everyone off! Oh, well, more Ronto Wraps for us! 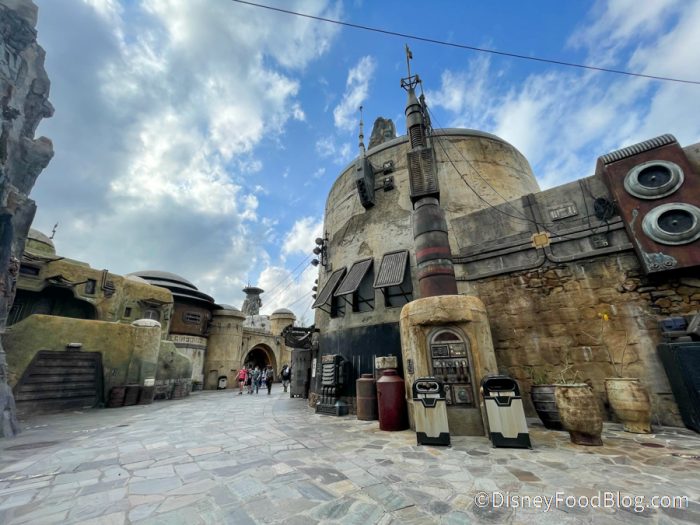 And of course, we had to pay homage to the Fastest Hunk of Junk in the Galaxy. 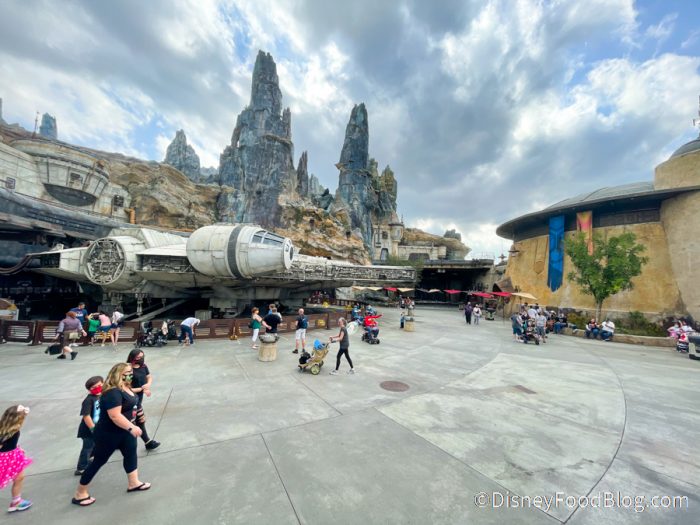 And then Chewbacca and Rey came out to say hi! May the Force be with you!

Hello from Chewie and Rey! pic.twitter.com/kNc7DzV5J1

In Toy Story Land, Slinky was practically FLYING through the air on Slinky Dog Dash. 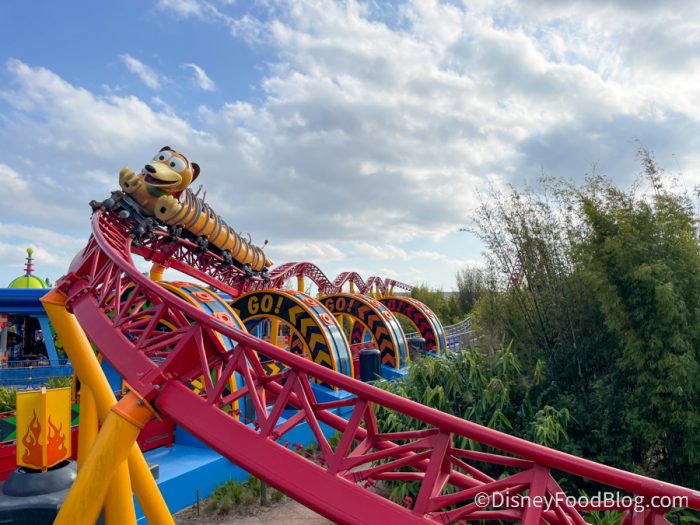 Look at him go!!! We had such a fun day at Disney World, and we hope that we shared some of that excitement with you and made you smile. We’ll be back again soon with even more photos and videos! Thanks for coming along with us!

When was the last time you were at Disney World? What was your favorite memory? Share it with us in the comments!

« Disney World Wait Times are On the Rise Again in ALL Four Parks!
VIDEO: New ‘Raya and the Last Dragon’ Trailer From Disney Premiered at the Super Bowl! »