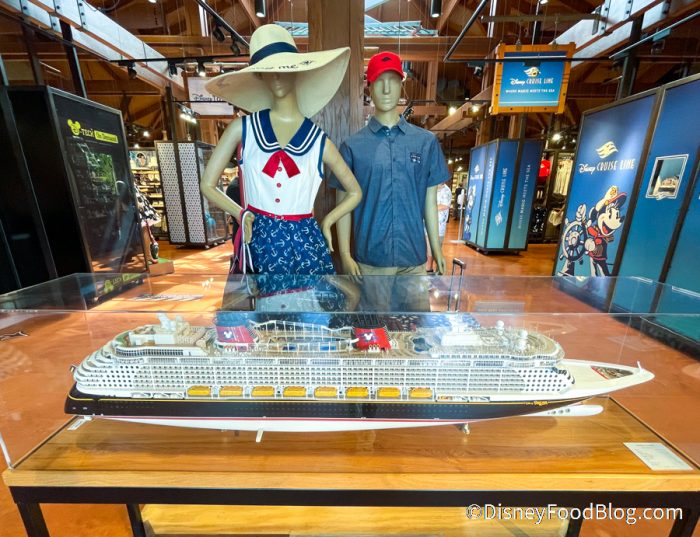 If we had to guess one place where Disney Cruise Line treats would be found in Disney World, it would be Disney’s Yacht Club Resort. It is a nautical-themed resort, so that checks out, right? 😂 So, after all those big announcements about new ports and the Disney Wish, we were pretty pumped to see the cruise line featured as the guest star of the bakery case at The Market at Ale & Compass! 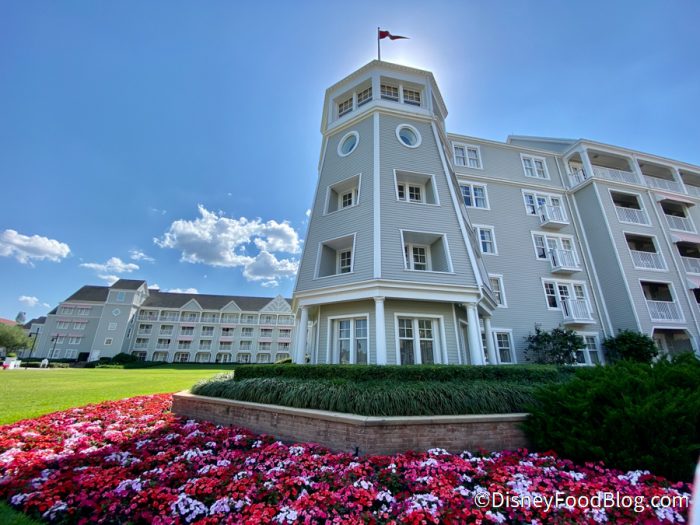 And, you can feel like you’re really at sea with TWO vibrant blue desserts! First up on deck is the Blueberry Cream Cheese Trifle with a white chocolate Disney Cruise flag on top of swirled ocean-like whipped cream and graham cracker sprinkles for $4.99. 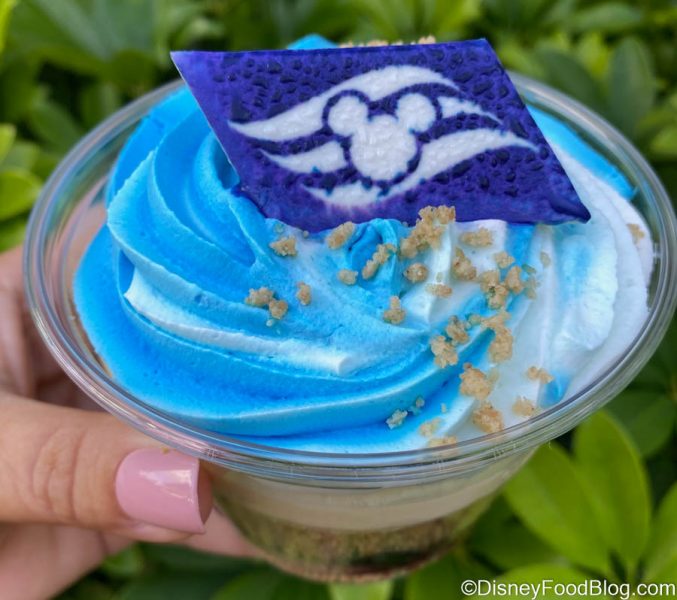 Blueberry Cream Cheese Trifle from The Market at Ale & Compass

But, you can find a bit of treasure if you dig deeper with layers made of blueberry on the bottom, topped with graham cracker crumble, followed by vanilla chiffon cake, cream cheese filling, and then more cake! 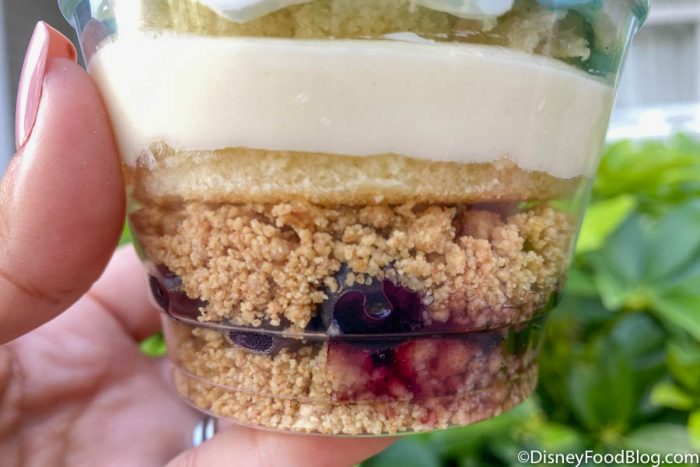 We got some major blueberry cobbler vibes from the Blueberry Cream Cheese Trifle (and we didn’t mind it one bit). 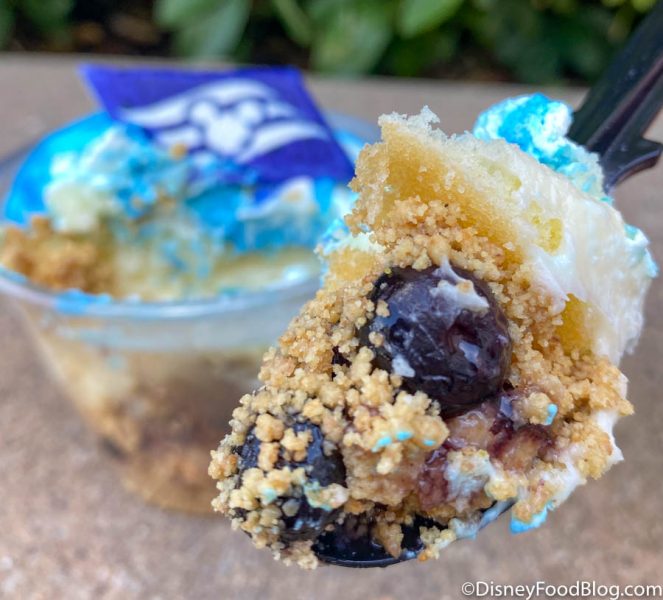 That’s a spoonful of yum

The graham cracker was buttery paired with the moist vanilla chiffon cake. The cream cheese and the whipped cream worked together to add sweetness to the trifle, while the blueberry added that POP of bright, fresh flavor that tied the whole treat together.

We are trying the Disney Cruise Blueberry Cream Cheese Trifle from The Market at Ale & Compass at Disney's Yacht Club! 🚢 pic.twitter.com/sRZGQUh23t

When we heard lemon, we were already sold on the Lemon Raspberry Tart. But, those ADORABLE decorations made it all the more irresistible! The tart was fixed up with white and blue striped white chocolate glacage (AKA mirror glaze), a gold-dusted white chocolate wheel, and chocolate rope that gave way to layers of raspberry mousse and lemon mousse for $5.49. 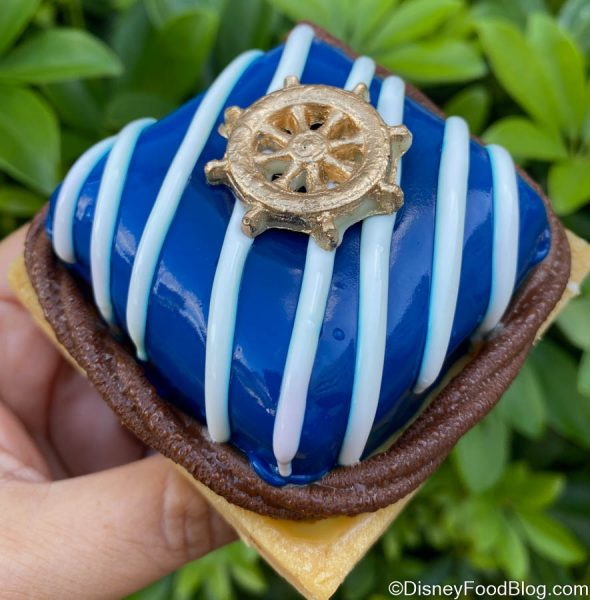 Lemon Raspberry Tart from The Market at Ale & Compass

You already know we’re BIG fans of lemon in a dessert as it adds the right amount of tartness to desserts. We could still taste the tanginess from the lemon, but there was double (if not triple) the amount of raspberry to lemon. Although the slight sweetness from the raspberry balanced with the lemon, we still think there could have been more of an even ratio of flavors!

We also grabbed the Disney Cruise Lemon Raspberry Tart from from The Market at Ale & Compass at Disney's Yacht Club! 🚢 pic.twitter.com/5x7hw6jh1V

The tart’s shell added a welcome crunch compared to all that soft mousse, adding buttery flavors to tie in with all the fruit! Of course, we couldn’t review the Lemon Raspberry Tart without talking about the gorgeous contrast between the blue exterior and pink and yellow interior. While both of these treats taste just as great as they look, we think Disney could have spiced up their names a little bit more. After all, the Disney Cruise Line treats are a bit out of place at Disney World Resort! 😉 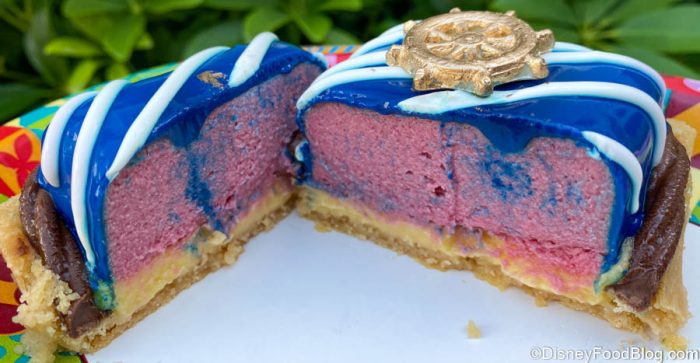 We know many of you are anxiously awaiting the moments you’ll be able to set sail on the Disney Cruise once again. But, you can at least satisfy your wanderlust with a trip over to Disney’s Yacht Club in the meantime. (Just don’t be on the lookout for any attractions at-sea or multi-story tower suites, because you’ll actually have to wait for the Disney Wish to debut for those!) As we daydream about an ice cream cookie sandwich on Disney’s Castaway Cay, we’ll be sure to update you on all the Disney Cruise Line AND Disney World news you need to know soon!

Click Here to See ALL The Restaurants Coming to The Disney Wish!

How do you feel about seeing Disney Cruise merch and food in Disney World? Let us know in the comments!

« The Places You Can Always Find Celebrities in Disney World (Really!)
3 Trivia Questions Only the BIGGEST Disney Movie Fans Can Answer! »