Disney World and snacks. Snacks and Disney World. Can one exist without the other?! 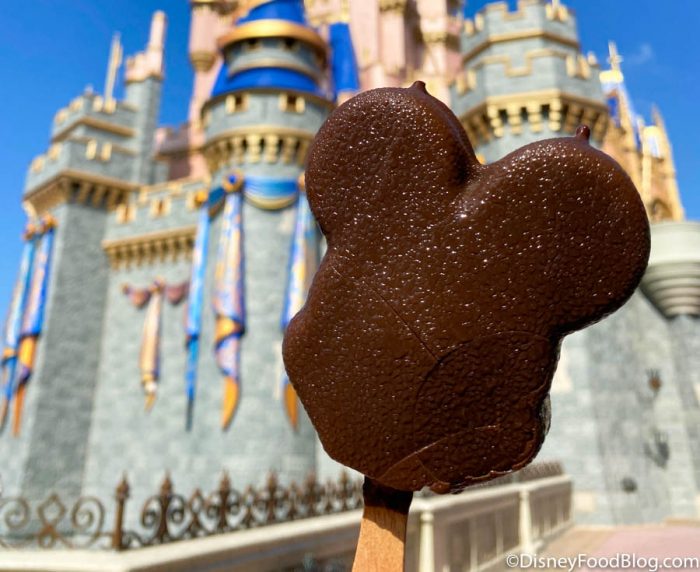 Whether you prefer sweet or savory snacks at Disney World, we’ve got you covered, and some people have VERY strong opinions about their favorite Disney snacks! Do you know how your favorite snack rates with other Disney fans?

We asked our readers on Instagram and let YOU tell us about your favorites! We had you guys rate 10 Disney snacks and you might be surprised by the results! Let’s start from the lowest ratings. 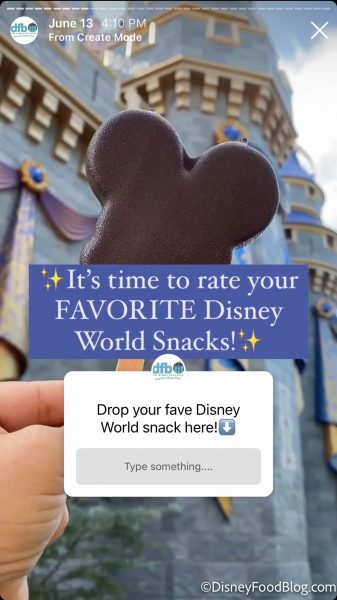 What is YOUR favorite Disney snack?

The Cheddar-Jalapeño Pretzel came in with the lowest ranking of all the Disney snacks. 53% of you said you’d pass on this savory treat. This pretzel is stuffed with creamy jalapeño cheese and is one of the more difficult-to-find pretzels in Disney Parks. It’s available at the Pretzel Palooza in Disney’s Hollywood Studios for $7.25. 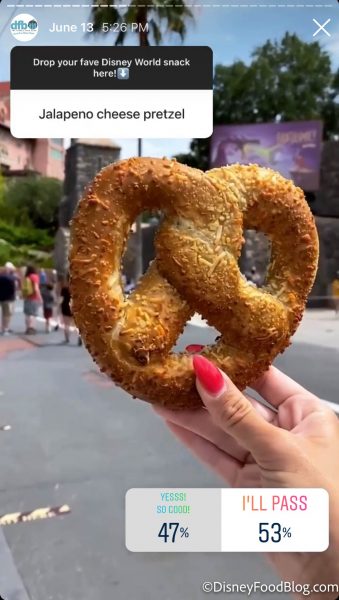 This Pretzel is not everyone’s fave

Next, we have a tie! 61% of you love the Ronto Wrap from Ronto Roasters. The Ronto Wrap comes in a pita with pork, slaw, and peppercorn sauce for $12.99. Ronto Roasters is located in Star Wars: Galaxy’s Edge in Hollywood Studios. 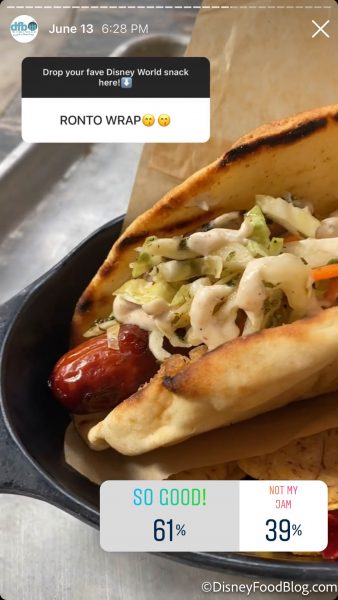 61% of you also agreed that the soft-serve ice cream from the Anandapur Ice Cream Truck in Asia in Animal Kingdom is superior to other soft serve ice creams at Disney for a tie with the Ronto Wrap. A soft-serve waffle cone costs $4.99. 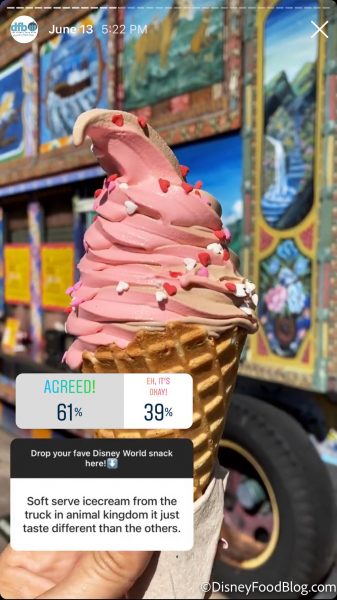 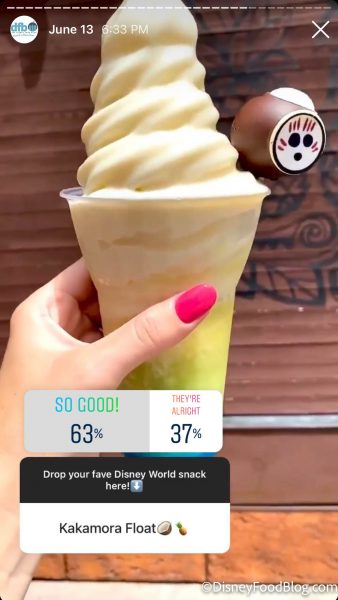 The Kakamora Float is SO good

The Corn Dog Nuggets got 71% of your support! With Casey’s Corner currently closed, you can get Corn Dog Nuggets served with a side of cheese dip from Westward Ho in Frontierland in Magic Kingdom for $6.99. 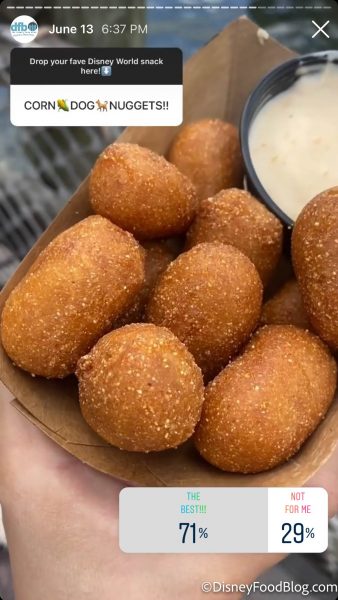 Coming in with a strong following, 75% of you love Gaston’s Cinnamon Roll! This warm cinnamon roll has more of a French toast vibe and will cost you $3.99 from Gaston’s Tavern in Fantasyland in Magic Kingdom. 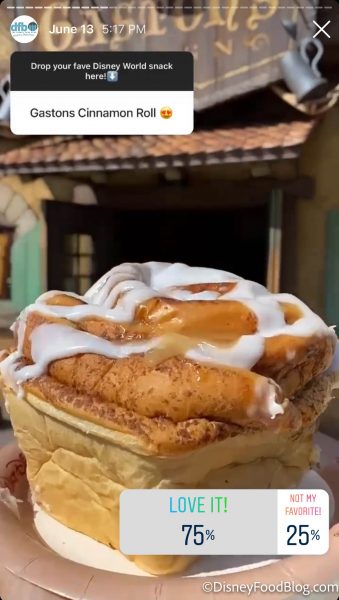 A lot of love for cinnamon rolls

Now we return to Animal Kingdom for the Nomad Lounge Churros. 77% of you say YUM to these churros. These cinnamon sugary churros are served with vanilla bean and strawberry chili dipping sauces for $9.  The Nomad Lounge is located in Discovery Island right next to Tiffins. 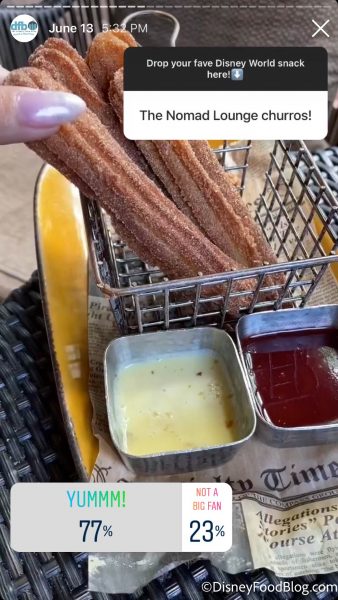 Surprising probably no one is the Dole Whip coming in with a strong 78% vote. The Dole Whip is a Disney Park staple and you can even get 10 different flavor combos. You can find the classic Pineapple Dole Whip at Aloha Isle in Adventureland in Magic Kingdom for $4.99. 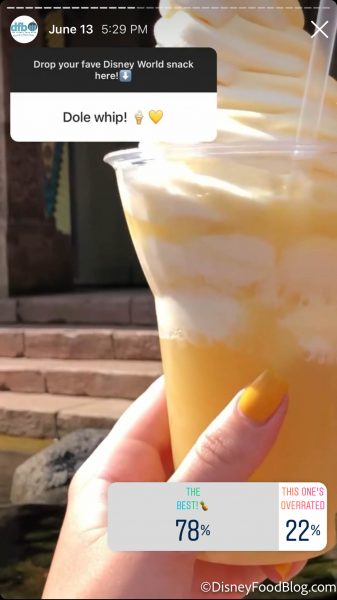 So good on a hot Disney day

Mr. Kamal’s Fries came in with an enthusiastic 84% of you saying, yesss! Mr. Kamal’s Seasoned Fries can be found at Mr. Kamal’s, a small kiosk located in Animal Kingdom between Asia and Africa. For $5.99, you can gobble up these seasoned fries served with tzatziki salad and Sriracha ketchup. 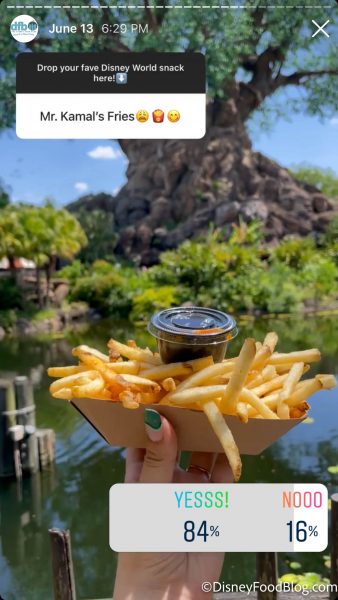 And the highest-ranked Disney snack is…drumroll please…the Num Num Cookie! With a YUM from 86% of you, Jack Jack’s Cookie Num Nums are HUGE chocolate chip cookies and clearly a Disney snack favorite. They are available at Market in Disney’s Hollywood Studios for $6.19. 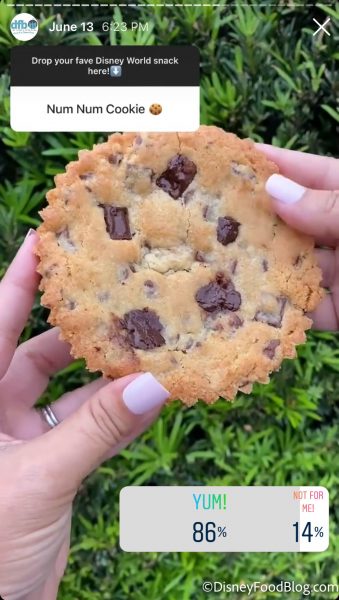 So there you have it! A Disney snack for everyone, though not everyone may agree with the results. What do you think about these snack ratings? Keep an eye on the DFB Instagram for future snack ratings so you can add your favorite snack!

What’s your favorite Disney snack? Let us know in the comments!