Okay, so y’all know we are ALL about some Dole Whips at Disney World, right? There’s a reason this classic snack has been around as long as it has, after all! 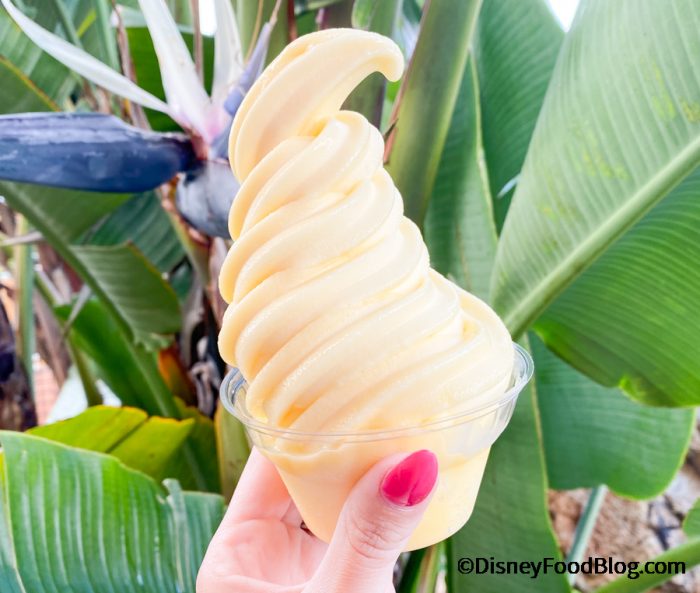 BUT…we’ve found that there’s so much MORE to Dole Whip life than the classic Pineapple Soft Serve most Disney World guests usually get. In fact, we’ve unlocked a whole world of Dole Whip flavor combos that might even make you forget about just having the classic pineapple. And now, we’re sharing some of our favorites with you!

Just a quick note: Dole Whip flavors and Dole Whip-inspired treats tend to rotate out often at Disney World. So if you’re looking for something specific, make sure it’s available first!

We are IN LOVE with the Kakamora Float, which you could get from Aloha Isle, but it’s currently unavailable. It’s Coconut Soft-Serve on top of Pineapple Juice and Blue Curacao Syrup garnished with a chocolate Kakamora Cake Pop. We’ll be on the lookout for it to pop back up on the menu! 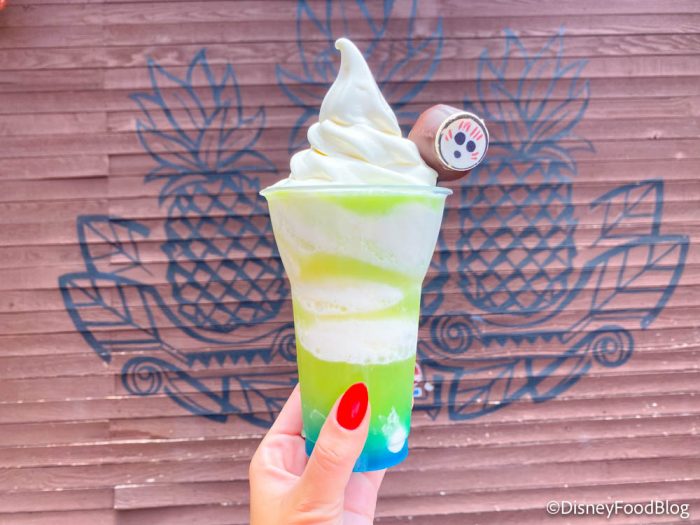 And, the combination of all those flavors in this thing just knocks it out of the park. If you haven’t tried it yet — one sip is all it will take to fall head over heels with Dole Whip’s tasty Kakamora cousin. Oh, and by the way, we invented a boozy version that’s now on a Disney World menu! 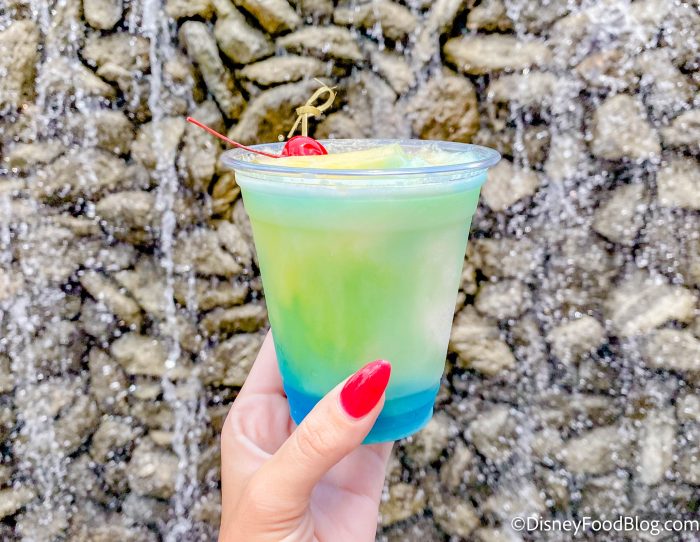 Read ALL about the Boozy Kakamora here!

The day we were able to swirl our Dole Whip with Coconut Soft Serve was the day all our Dole Whip dreams came true! The two flavors together are just PERFECTION in a cup — it’s like a Piña Colada, but better (and minus the rum). 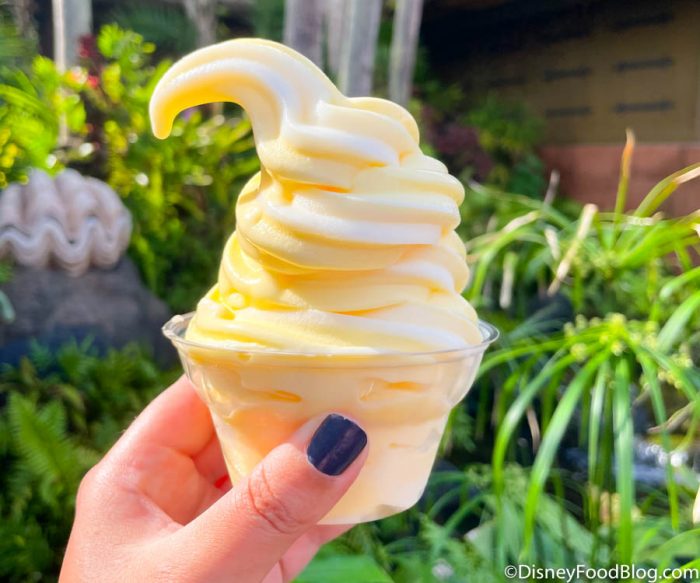 We love you, coconut pineapple Dole Whip swirl, so so much

And, you can get it now at Aloha Isle!

We were in love with the Hei Hei Cone when it first debuted back in 2019, but then it disappeared! However, our little friend from Moana recently just returned to Disney World and we couldn’t be happier. This treat has a blue cone, pineapple soft serve, raspberry soft serve, sugar “eye” pieces,” and a sour candy “comb.”  The raspberry and pineapple just go so well together and is still one of our favorite Dole Whip combos. 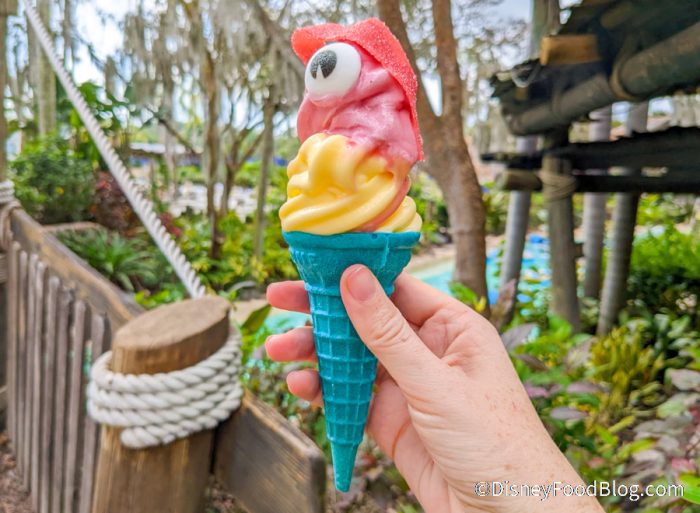 The Hei Hei Cone is back!!!

You can get this over at the Snack Shack at Disney’s Typhoon Lagoon Water Park!

Click here to see our full review of the Hei Hei Cone!

We drink lemon and lime sodas, so why not eat Lemon and Lime Dole Whips? We originally discovered this flavor combo at Storybook Treats at Magic Kingdom, but you can also grab it when those two flavors are available from Pineapple Lanai at Disney’s Polynesian Village Resort! 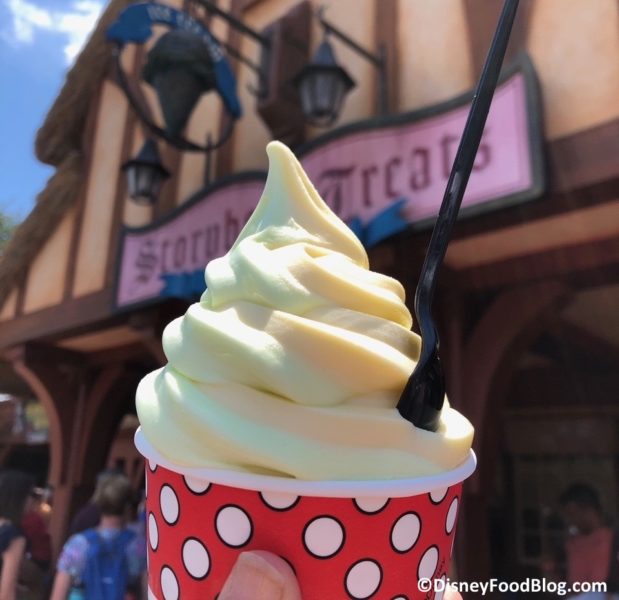 This is one of those classic flavor combos you just can’t go wrong with!

The Tropical Serenade debuted for Disney World’s 50th anniversary and is made of the famous POG juice (passion fruit, orange, and guava juice) with coconut soft serve, topped with a pineapple upside-down cake pop. This thing is DELICIOUS! The tropical flavors of the POG Juice mixed with the coconut soft serve is refreshing and flavorful, and a unique combo if you’re a Dole Whip lover. 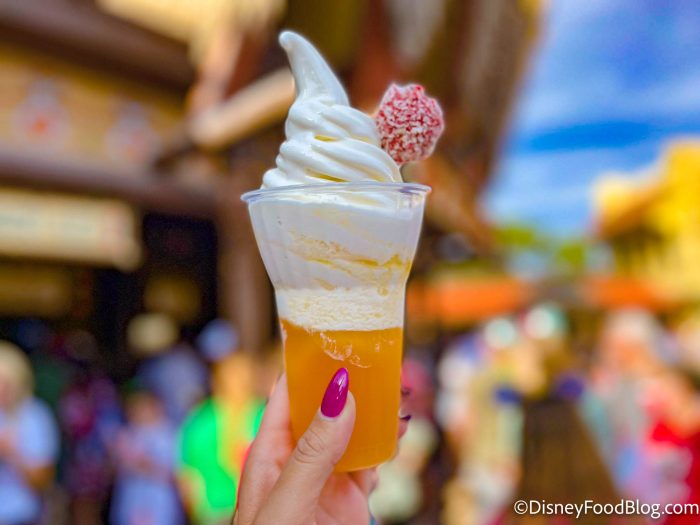 You can grab this one over at Aloha Isle in Magic Kingdom!

Click here to see our full review of the Tropical Serenade!

So this combo is SUPER rare, but we have seen a few different versions of it in Disney World over the last year. The first was the Mango Limeade Dole Whip, which was at the 2021 EPCOT Flower and Garden Festival as part of the Garden Graze food stroll. There was a list inside the festival passport of food you have to try and for each, you get a sticker. Get all the stickers and your prize was this special Dole Whip! 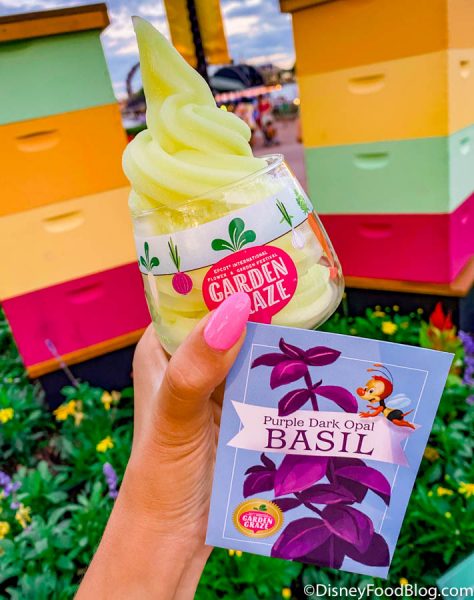 It even came in its own souvenir cup, too! We really hope to see this return at the 2022 EPCOT Flower and Garden Festival, so we’ll be on the lookout and keep you updated.

The second way we’ve seen this flavor combo is a Mango Lime Swirl we recently spotted over at Refreshment Port! You could get a Mango, Lime, or Swirl with a waffle cone on top! The sweetness of the Mango balances well with the tartness of the Lime. 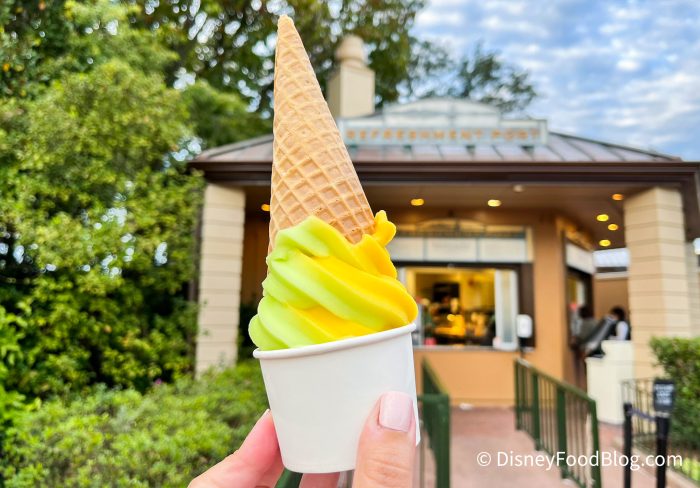 So, be on the lookout for these flavors the next time you’re at EPCOT!

Click here to see our full review of the Mango Lime Swirl!

The other way you can try out mango and lime together is in the Habanero Lime Galley Shack Swirl over at Snack Shack  at Typhoon Lagoon. This is a signature cocktail made with Dole Whip Mango and Lime, El Jimador Silver Tequila, Habanero-Lime flavoring, Sprite, and Lime-Chili Rim. This doesn’t sound like it would work, but it’s surprisingly delicious! The Habanero Lime flavoring is surprisingly spicy, but not TOO much — we thought it brought the perfect amount of heat. 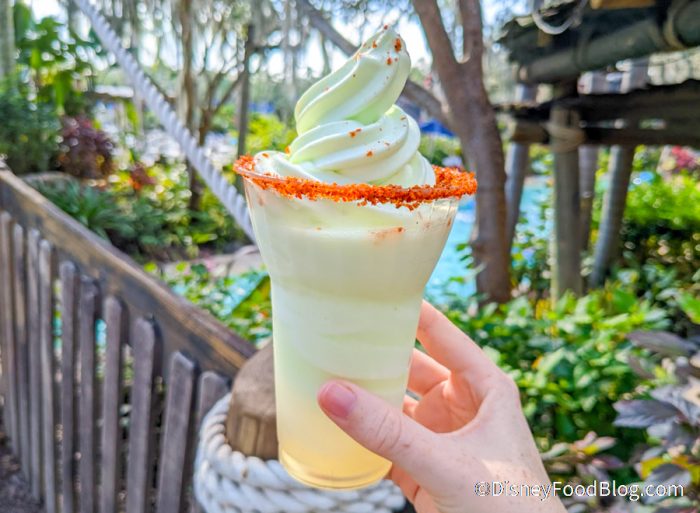 We do have a tip, though — wait until the DOLE Whip melts and then the drink all together because the flavors blend better that way!

Click here to see our review of the Galley Shack Swirl!

So we’ve got another awesome food hack for you! It involves Dole Whip and the Pineapple Cookie they have offered at Candy Cauldron in Disney Springs and the Confectionery in Magic Kingdom. We split the cookie in half to create two cookies and then we added that yummy Dole Whip on one cookie and put the other cookie on top like a sandwich (and this would work great with TWO pineapple cookies, too). 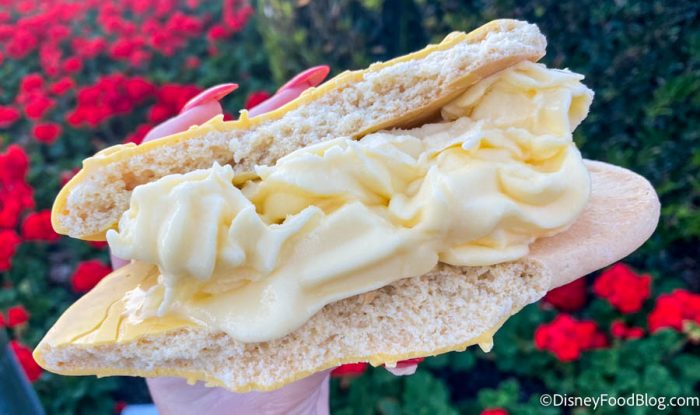 Our Dole Whip Cookie Sandwich was perfection, by the way, and we highly recommend trying it out for yourself if you have the chance to grab that Pineapple Cookie!

For fans of sweet AND tart, we give you the Strawberry and Lemon Dole Whip Combo. We tried these flavors together with the awesome Incredibles Dole Whip Float that was around in March. The float also had Black Cherry Lemonade, which took it up even another notch! 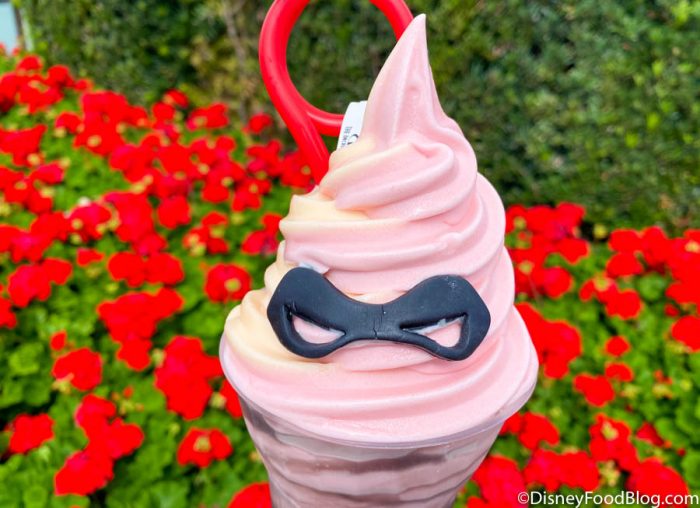 Check out that mask!

But we totally loved the combination of strawberry and lemon, so we’re hoping to get a chance to mix those flavors again!

Click here to see our full review of this Dole Whip float!

Okay, so lots of people know that Strawberry and Chocolate are just two flavors that work, right? And they work even better as a Dole Whip, as we learned around Valentine’s Day and for Mother’s Day when Marketplace Snacks at Disney Springs came out with a swirl of Strawberry Dole Whip and chocolate soft-serve with a chocolate-dipped strawberry garnish. 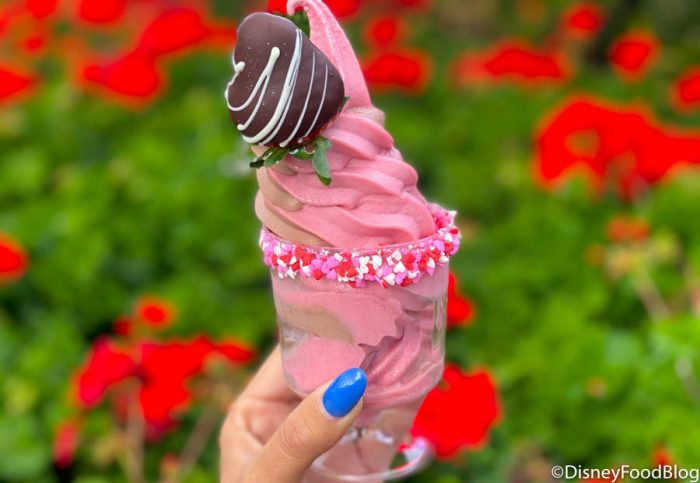 Yes, it was awesome. And yes, we’re bitter this was only for Valentine’s Day and Mother’s Day because we would eat this all year round.

Click here to see our review of this treat!

We are BIG fans of the Coconut Soft Serve and we’ll mix it with just about anything, but one of our most genius moves was combining it with Raspberry Dole Whip. Because the Coconut and Raspberry together BLEW OUR MINDS. The tartness of the raspberry played so well with the understated sweetness of the coconut. 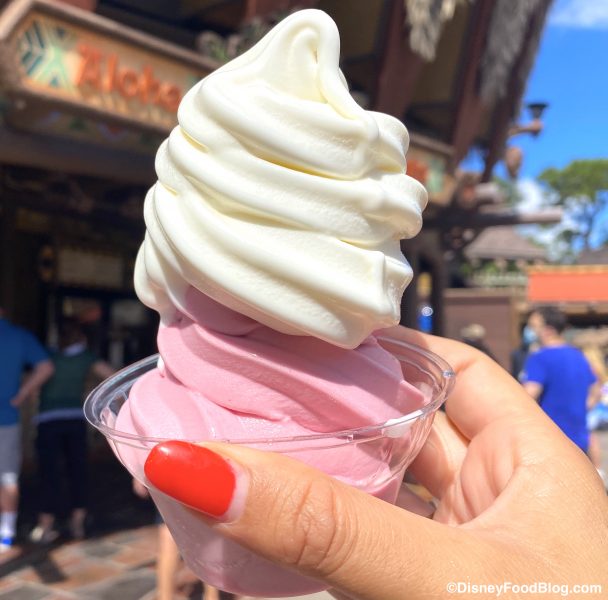 Our only problem is that we couldn’t come up with a name for our creation: Cocoberry? Razznut?

So those are OUR favorite Dole Whip flavor combos, but we’d be curious to know what yours are, so drop us a comment and let us know!

Click here to see which Dole Whips just got a price increase in Disney World!

What’s your favorite Dole Whip combo? Let us know in the comments!

« A Frozen Sing-Along Celebration at Disney World Is Now Seating More Guests
Do You Know the Real Reason Behind This Disney World Hotel “Mistake?” »