Disney loves to go all out with special new treats for holidays. 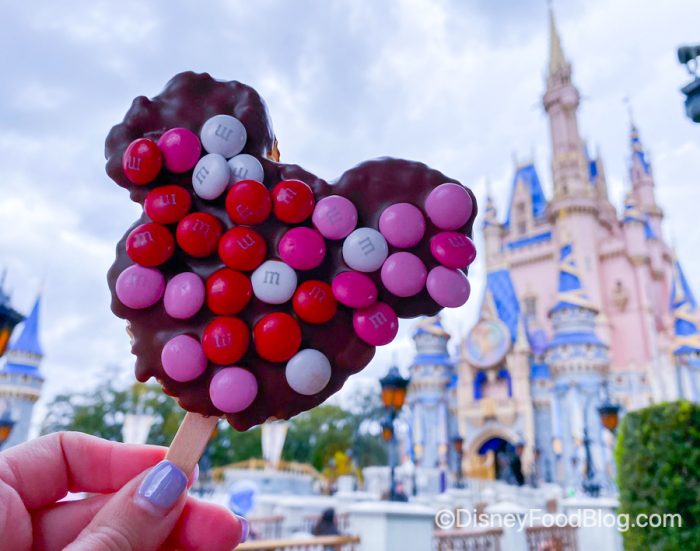 With Valentine’s Day quickly approaching, red and pink treats are arriving all over Disney Parks, and naturally we ✨have✨ to try all of them. And you know what we found today? Let’s just say it involves fluffy beignets and a LOT of cinnamon.

Disney recently released a huge list of all the Valentine’s Day treats coming to Disney World, which includes two Valentine’s Day beignets at Scat Cat’s Club Cafe in Disney’s Port Orleans — French Quarter Resort hotel. The two returning beignets are the Cinnamon Valentine’s Day Mickey Beignet and the Baton Rouge Beignets, which are served with a pipette of cinnamon whiskey.

Both Valentine’s Day beignets were scheduled to be available at Scat Cat’s Club Cafe as of today and through February 28th. Keep in mind that we didn’t see either holiday treats listed on the menu, so you might have to order from memory. 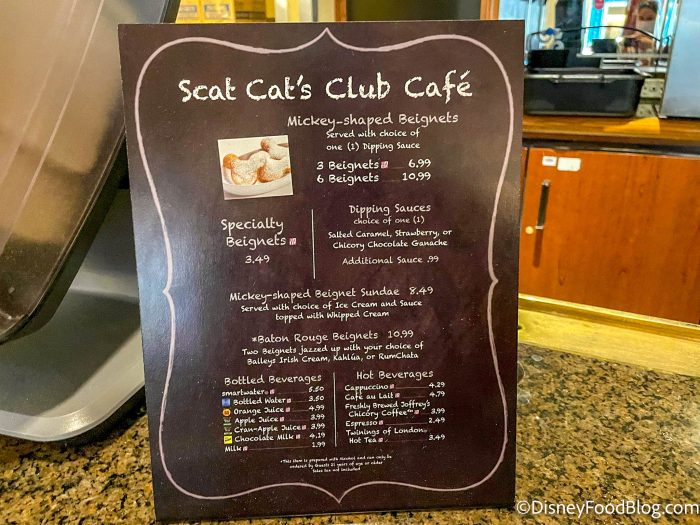 Check the dessert case to see what’s available during your visit! These treats are popular, so they can sell out. 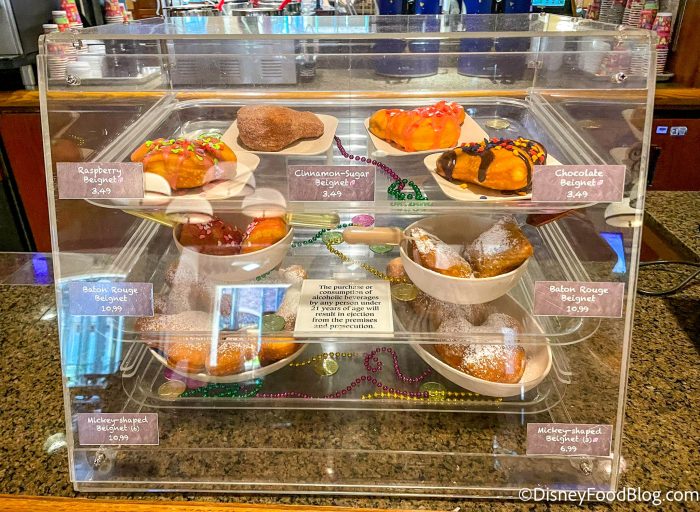 Here’s what we got!

The Cinnamon Valentine’s Day Mickey Beignet is a Mickey-shaped beignet topped with cinnamon candy drizzle and Valentine’s Day quins, along with crushed cinnamon candies for $3.49. It’s really pretty, but it looks a bit different from what we saw in 2020. We could smell the cinnamon from pretty far away! 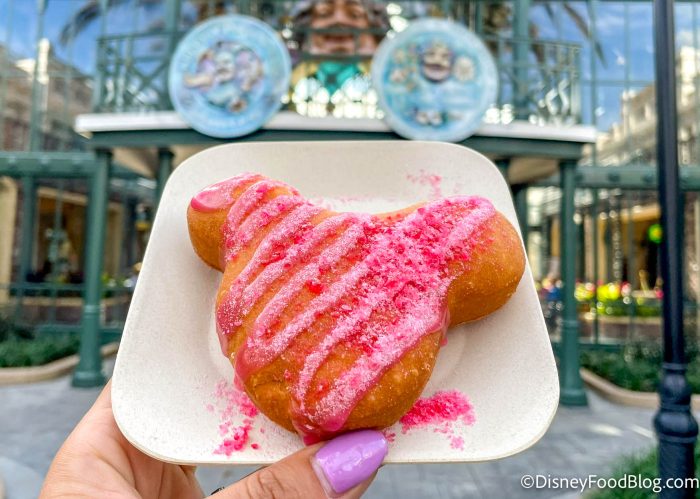 The icing was great and we loved the texture of the beignet, but note that the larger sugar crystals aren’t crunchy sugar — they’re actual pieces of candy that might get stuck in your teeth. You can REALLY taste the red hot candy too, so keep that in mind if that’s not your thing. (It was SPICY.) 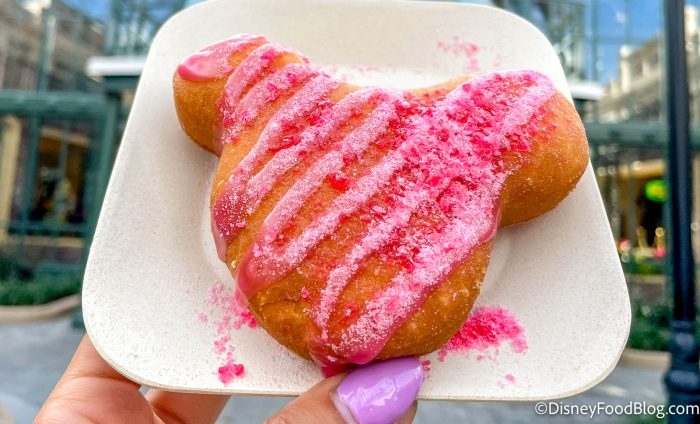 They weren’t bad, but they also weren’t exactly serving us “wow” vibes. Still, if you like cinnamon and red hot candy, you’d probably enjoy this holiday treat! 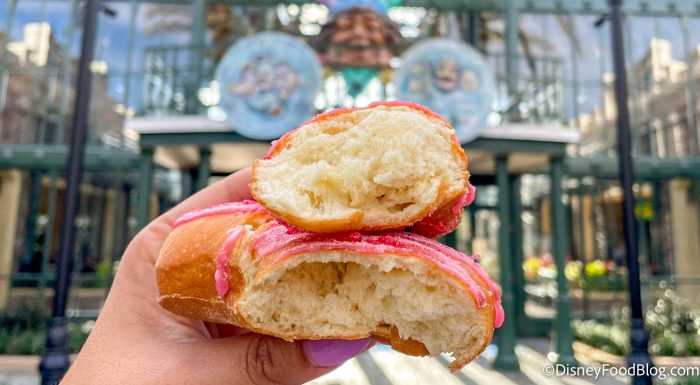 During our second trip back to Port Orleans, the new beignets were available! We’ve already had the Baton Rouge Beignets not long ago, but now we’re trying the Valentine’s Day version of these beignets. The holiday version is topped with a hot cinnamon candy drizzle, Valentine’s Day quins, and crushed cinnamon candies with a pipette of cinnamon whisky for $9.99.

Don’t let the idea of hot cinnamon flavoring scare you — there wasn’t an overwhelmingly spicy flavor at all! The icing was nice and sweet, and the candies has just a light cinnamon taste. We also loved the whiskey in the pipettes. It’s a great way to control how much of a whiskey flavor you want in your beignets! 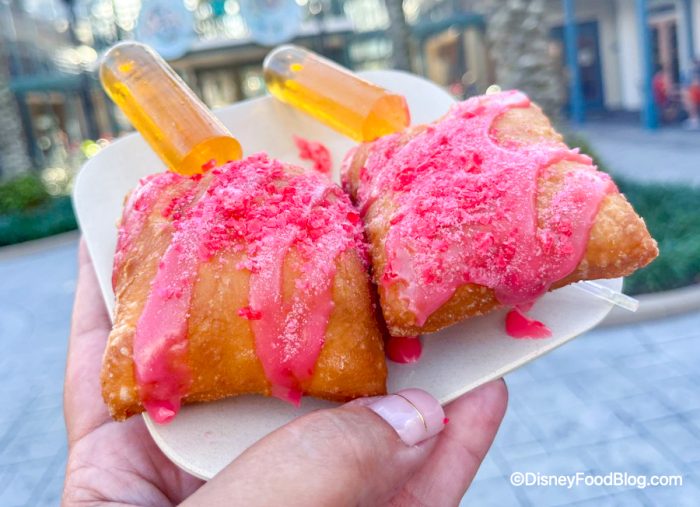 One of our Disney favorites with a Valentine’s Day twist!

The beignets themselves were nice and light and puffy! They tasted exactly how you would want a classic Disney beignet to taste! Our biggest complaint was that the icing was very sticky, and those little cinnamon candies will get stuck in your teeth! Even if you don’t love whiskey or cinnamon, give these beignets a try! Our reporter was pleasantly surprised by how well the flavors worked together. 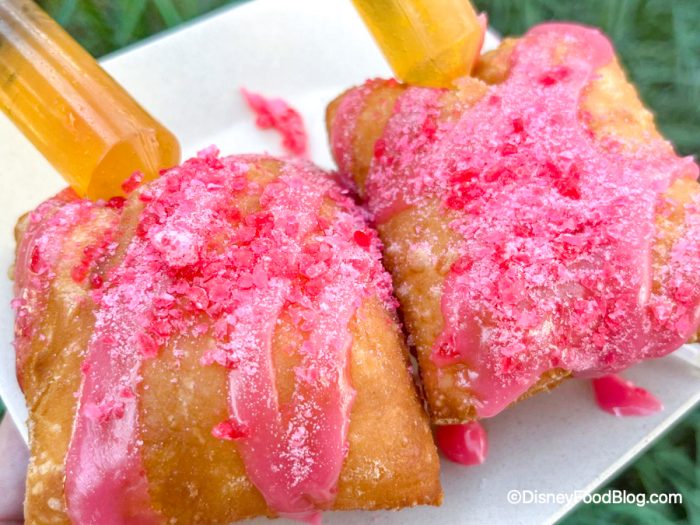 These were SO good!

That said, if you aren’t a fan of sweets, you might want to avoid these beignets. The icing drizzle is pretty sweet! You can order these treats at Scat Cat’s Club Cafe in Disney’s Port Orleans — French Quarter Resort through February 28th, so make sure you head there before they’re gone. Stay tuned for a review of the Valentine’s Day Baton Rouge Beignets soon!

Check out the FULL guide to all the Valentine’s Day treats coming to Disney World in 2022!

Would you try these beignets? Tell us in the comments!