Feeding a family at a Disney theme park can be challenging. 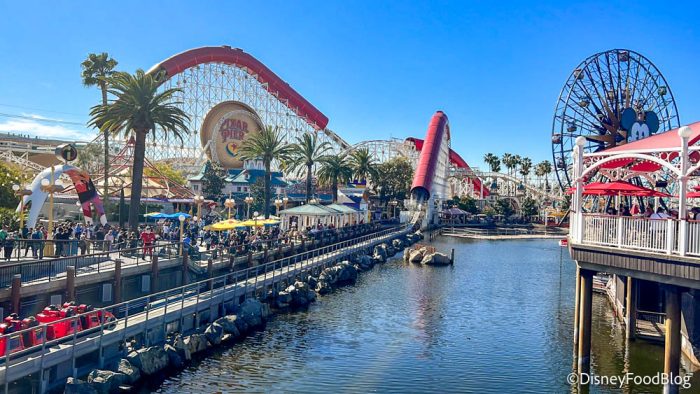 First, it can be tricky to find something to satisfy picky eaters. Second, feeding a family can get expensive at Disney parks. Third, how can you guarantee you’ll have enough food for everyone? Well, Disneyland thought about all that and is now offering a meal that could be exactly what you need to feed YOUR family.

Meet the Family Picnic Platter at Paradise Garden Grill at Disney’s California Adventure! For $64.99, you get enough food to serve up to FOUR people (so that’s about $16 per person, which isn’t too bad when it comes to eating at Disneyland). It comes with BBQ Half Chicken, Pulled Pork and Ribs, Andouille Sausage, Poblano Mac & Cheese, Chuck Wagon Beans, Potato Salad with Bacon, Creamy Coleslaw, Jalapeño-Cheddar Corn Bread, Pickles and Onions, and Cherry Cheesecake. 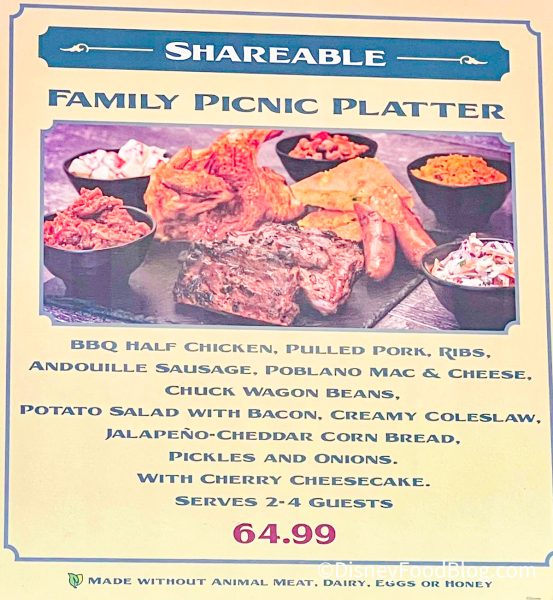 Sound like a lot of food? Well, it sure does LOOK like it too! We thought the platter overall was pretty great because of the amount of food you get, as well as the variety. 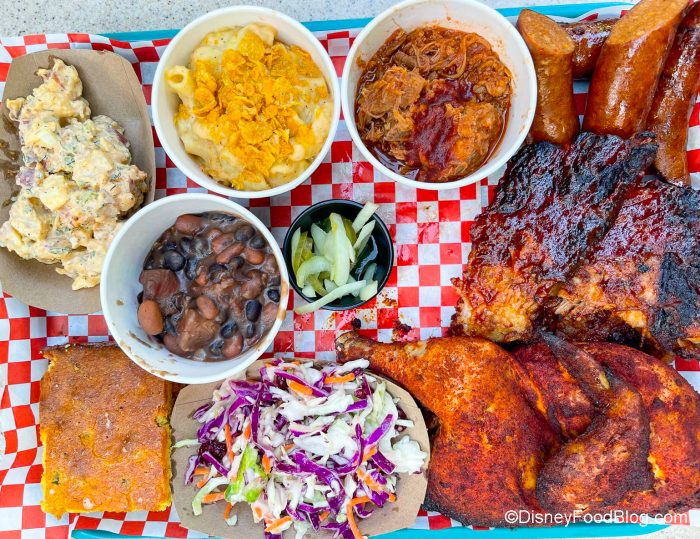 A WHOLE lot of food!

One of our favorite things at BBQ joints is the sides, and this platter has ALL of them. Speaking of which, we have to give a shout-out to the Chuck Wagon Beans, because of all the items included, they were the standout! There are GIANT chunks of pork in them, and the texture reminded us a lot of refried beans — a family picnic essential if you ask us. 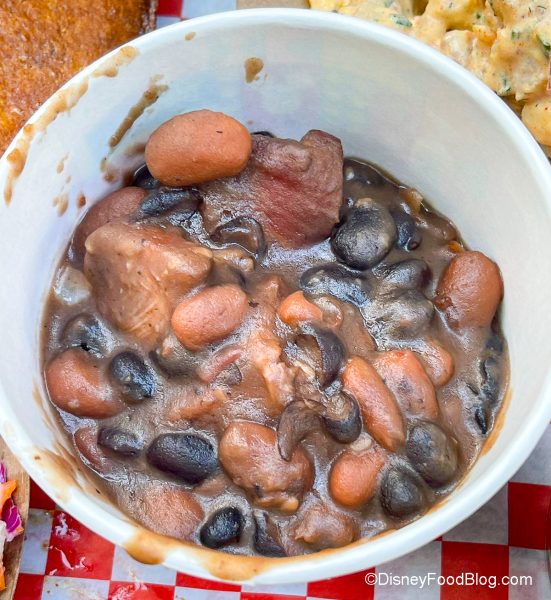 These beans were IT

The Potato Salad with Bacon was also top-notch. We could really taste the dill and it combined with the rest of the flavors to make for a potato salad we wish we could whip up at home! 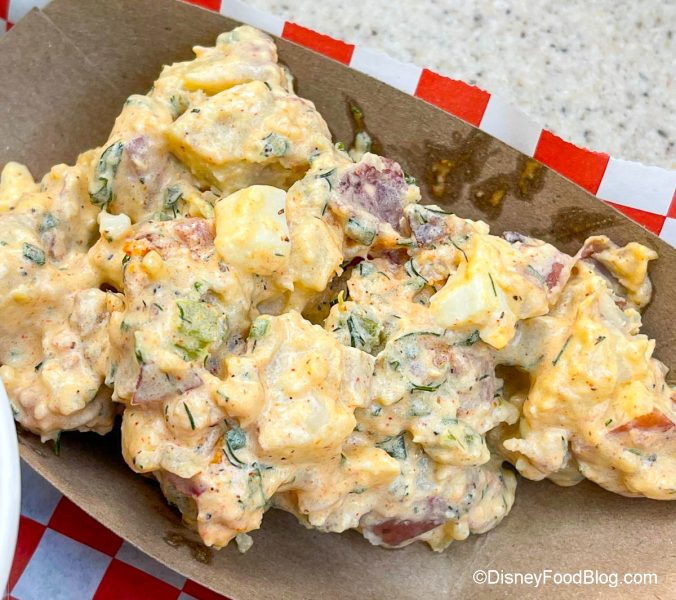 As for the Poblano Mac & Cheese, it was nothing special, but we still enjoyed it. Is it the best mac and cheese we’ve had at Disneyland? Probably not. But, it’s satisfying and it’ll likely keep the kiddos happy. 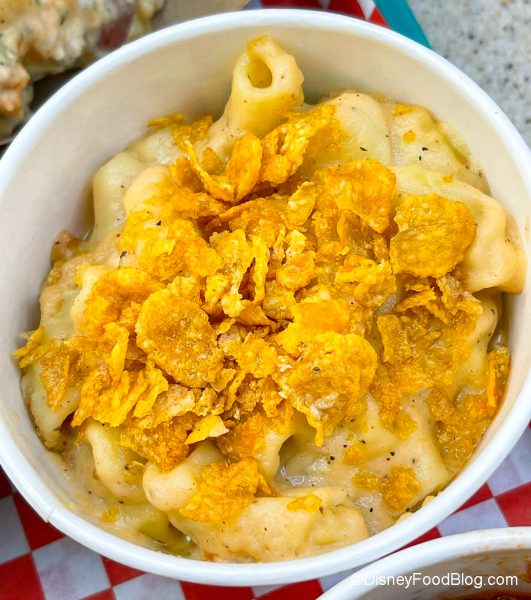 We felt the same way about the Creamy Coleslaw — it’s not the best we’ve ever had, but it’s still good. 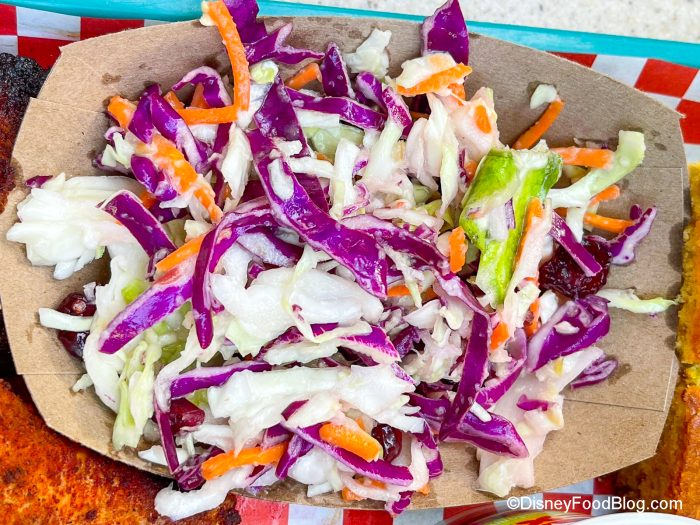 We have a bone to pick with the Jalapeño-Cheddar Corn Bread though. WHERE is the butter?! WHERE is the honey?! The cornbread itself is pretty tasty, but it could have used some love from condiments and we couldn’t find ANY. 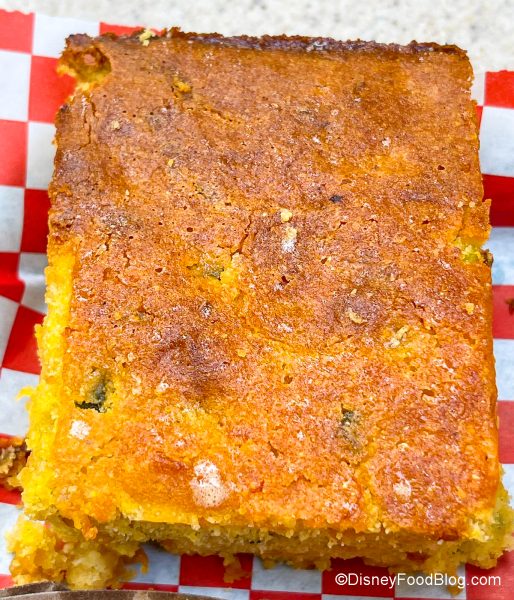 How about some butter for our cornbread?

Now let’s get to the main entrees — the MEAT! We started off with the ribs and to say that we inhaled them would be an understatement. They were VERY good and ended up being our favorite of all the meats. 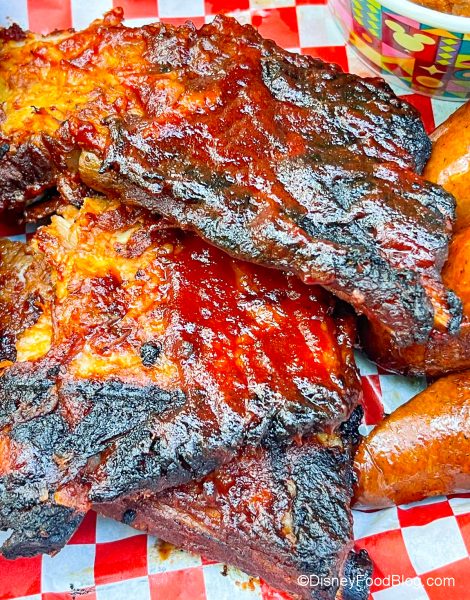 The chicken was also really tasty and we were impressed with just how generous the portion size was. You’re getting A LOT of chicken! 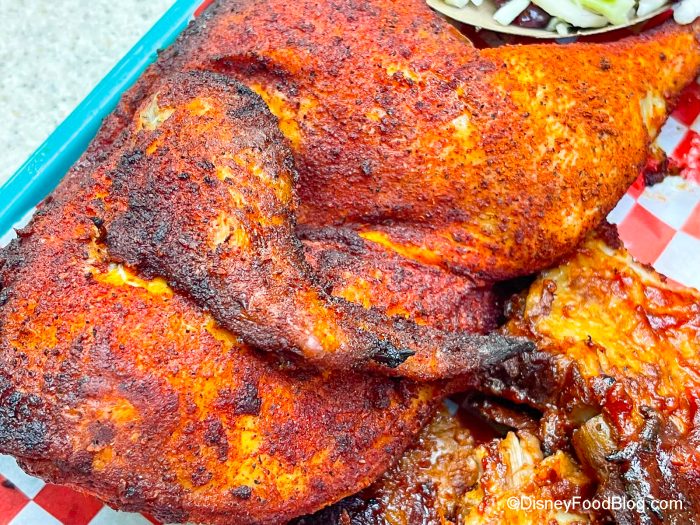 The pulled pork probably ranked lowest on the list for us — it had a strong vinegar taste and was very soupy. 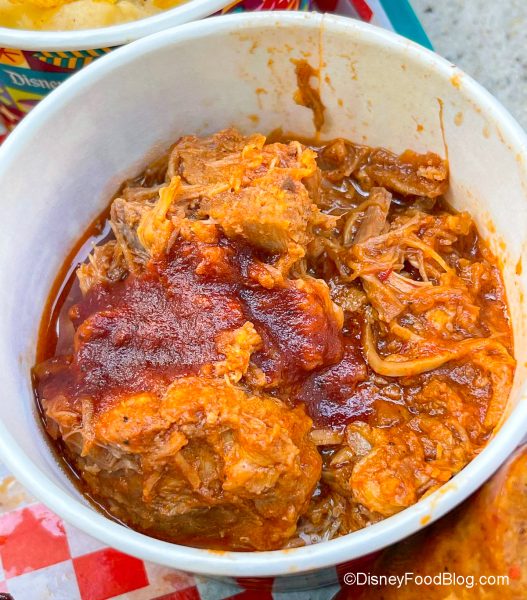 The most controversial part of the picnic? The Andouille Sausage. One of our reporters LOVE it and the other absolutely did NOT love it. It really just comes down to personal preference and whether you generally enjoy sausage to begin with. 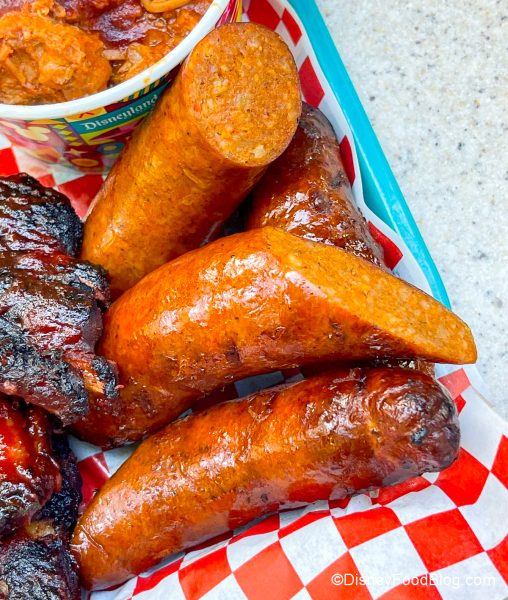 We were conflicted on the sausage

And, lastly, let’s get to that dessert! This is just like the classic Cherry Cheesecake you remember from childhood — a creamy cheesecake topping (that’s similar to Cool Whip in consistency) with straight up canned cherry pie filling and a graham cracker crust. You’ll get TWO of these with your meal and it’s a good thing because everyone would be fighting over it if there were only one — it’s delicious! 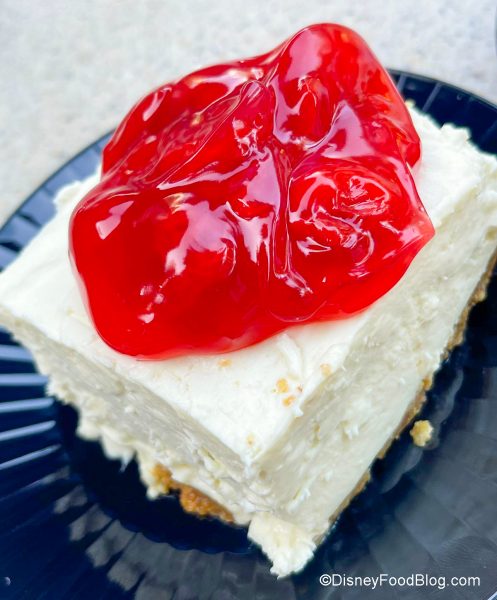 Overall, we loved how nostalgic this meal felt — we had an old-school park picnic in Disneyland and we are here for it! It’s not quite as good as Big Thunder Ranch BBQ (which we said goodbye to in 2016), but it’s a fun new option, very filling, and at a good price point. Just note that if you order it (either in person or via mobile ordering), it takes a little time to prepare because it is A LOT of food. And, you might want to have some wet wipes handy because this can get MESSY! 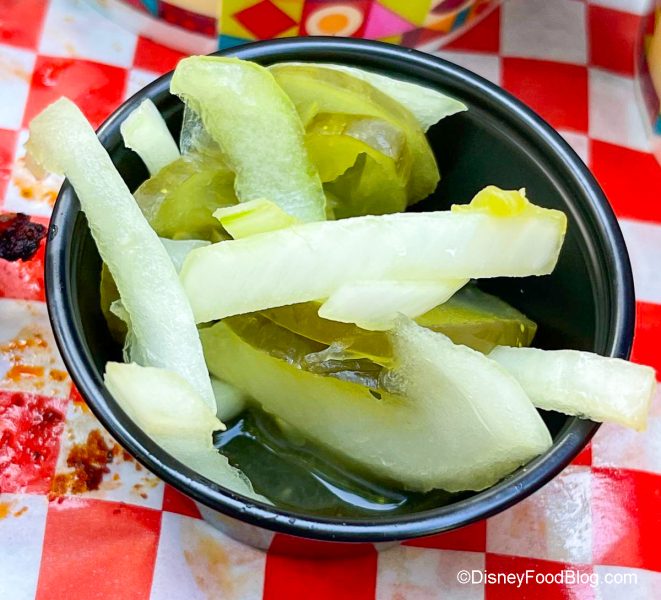 We even got a side of pickles and onions

And, BONUS — we also decided to try another menu item! The North Carolina-style BBQ Pulled Pork Sandwich costs $13.99 and is served with Creamy Coleslaw and Crispy Jalapeños, Pickles, Onions, and a choice of side.

Unfortunately, this one just wasn’t a winner in our book. Like the pulled pork, we thought that the meat had a really strong vinegar taste and it was hard to eat with just how wet and saucy it was. Plus, our poor bun really took a hit from all the sauce and it became pretty mushy by the last bite. 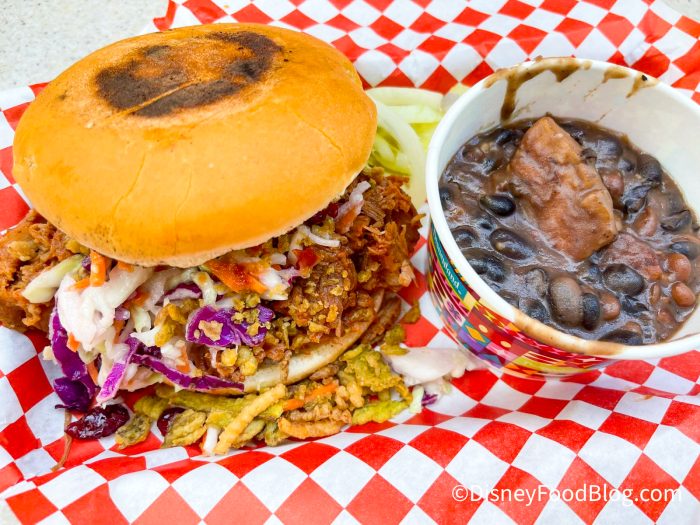 Now, you might be wondering — what do you drink with all that? Well, we picked up the Peach Cobbler Cocktail to wash it all down! It’s made with Moonshine, Peach Schnapps, and Peach-Cinnamon Purée for $16 and sounded like the perfect match to all this BBQ food! And, we were totally right! This is a delicious and refreshing drink that’s easy to drink and not too sweet. 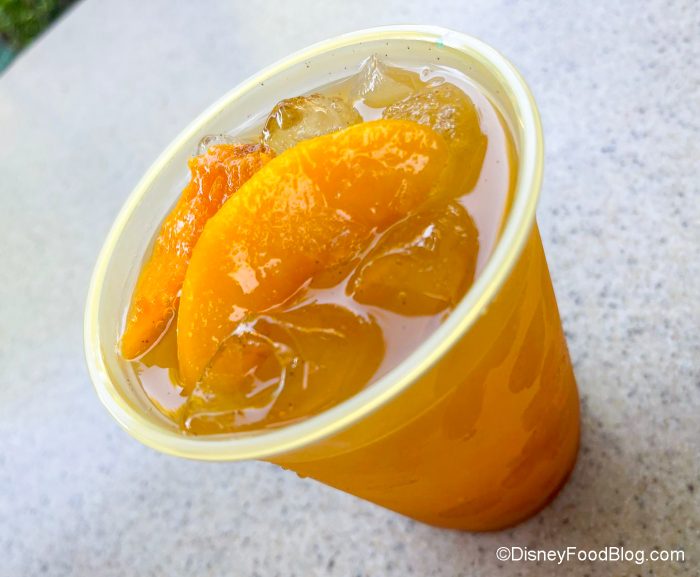 So, if you’re looking for a hearty meal that is easy to split with the family in Disneyland, Paradise Garden Grill is THE place to go right now! You won’t have to order up separate dishes if you’re going with the platter and you can even get a drink to pair. Of course, we’ll be on the lookout for any other new eats in the Disney Parks, so stay tuned to DFB for more!

Here’s How One of Disneyland’s Best Sandwiches Just Got EVEN BETTER!

What’s your go-to restaurant for feeding your family at Disneyland? Let us know in the comments!