At DFB, we LOVE Disney World’s plastic cheese. You know, that golden, plastic-looking cheese that comes with Mickey pretzels and corn dog nuggets. It’s the kind of cheese that isn’t necessarily the world’s finest cheese, but it does exactly what it needs to do. What can we say — it’s a classic! And while you won’t find us disparaging plastic cheese very often, we do feel obligated to inform you that there is a HUGE difference between plastic cheese and beer cheese. 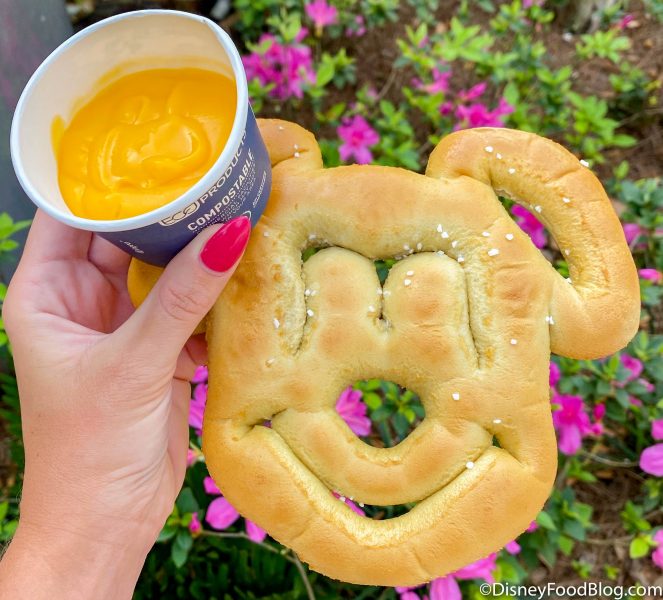 Plastic Cheese is a favorite of ours!

Ok, so what’s with all the cheese talk? Well, the latest victim of Disney’s supply issues seems to be cheese. Let’s investigate what’s going on!

END_OF_DOCUMENT_TOKEN_TO_BE_REPLACED

Well, if you weren’t taken enough with what we can see so far of Jock Lindsey’s Hangar Bar (slated to open in Downtown Disney/Disney Springs this fall), perhaps the latest information from Disney about the upcoming location will whet your appetite…

It’s story time, friends! Here’s a little background on the place… According to Disney, when Jock Lindsey (the frequent pilot of Indiana Jones) flew Indy over Florida while searching for the Fountain of Youth in 1938, he noticed a charming town below and decided to build a home right there on the waterfront. He often entertained his friends from the Society of Explorers and Adventurers in his hangar where they enjoyed drinks and good times. There seems to be a no-holds-barred approach to the styles of cuisine, as the tapas and beverages will be “inspired by Jock’s globe-trotting to all continents,” which could result in fun twists on anything and everything! In the meantime, Disney has provided a glimpse at some of the eats on the way.

Not only will the decor be inspired by the location’s aviation theme, but it appears some of the plating will, too. Check out the airplane “dish” holding the Pretzels with house-made mustard and beer-cheese fondue… Dr. Elsa’s She-Deviled Eggs will be topped with lumps of crab and brined in beet juice, while the “Good” Dates will be stuffed with goat cheese and topped with Marcona almonds. But the winner for Best Name (so far) has got to go to the “Squid! Why’d It Have to Be Squid” calamari flatbread with spicy harissa. Specialty cocktails will include drinks like The Aviator’s Flight, The Scottish Professor, The Bitter Barkeep (with Peruvian Pisco), a Hovito Mojito, Anything Goes (a spicy cocktail created with an Asian spirit), The Fountain of Youth, featuring Florida vodkas, and a Cool-headed Monkey.

Me? I’ll be ordering a Reggie’s Revenge, with hopes of sipping it while enjoying the waterfront views from Jock’s old dry-docked steamboat… Looks like plenty of good food and great times are coming to Disney Springs!

What do you think of some of the menu items coming to Jock Lindsey’s Hangar Bar? Please let us know with a comment!