Sure. You can get chicken tenders, mac & cheese, and fun sauces outside of the Most Magical Place on Earth. But…have you ever gotten them like THIS?! If you haven’t, then you’re making a BIG mistake. Don’t worry — we’re about to tell you how to fix it. 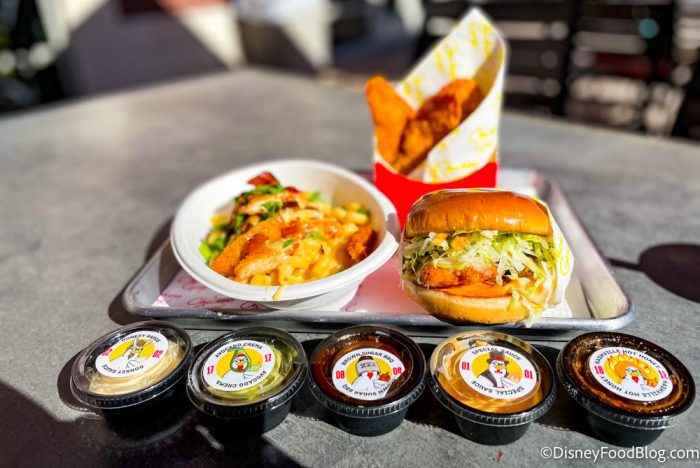 You might already know that some of the best table service restaurants can be found in Disney Springs, but did you know that there’s also some great fast food available there as well? Right now we’re taking you on a trip with us to a counter service restaurant that was created by a celebrity chef and we’re going to show you why it might be worth it to opt for chicken tenders and mac & cheese over some of Disney Springs’ fancier eats! END_OF_DOCUMENT_TOKEN_TO_BE_REPLACED

We just gave you a sneak peek and full review of the newest restaurant in Disney Springs a couple of days ago. Today we are excited to let you know that Chicken Guy! is officially open!

You’ll find this new fast-casual spot located near the Planet Hollywood Store across from the Coke Store.

The significance of the name of this restaurant should not be missed. Chicken Guy! is a nod to celebrity chef Guy Fieri who has partnered with restauranteur Robert Earl to open this flagship location of the restaurant.  You may know their work from Guy Fieri’s Burger and Sandwich menu at Planet Hollywood Observatory.  END_OF_DOCUMENT_TOKEN_TO_BE_REPLACED

We were invited to take a sneak peek at the newest restaurant coming to Disney Springs… and that’s Chicken Guy!

In fact, Chicken Guy! is both the name of the restaurant and also a nod to one of the two people behind this new venture: celebrity chef Guy Fieri, who has partnered once again with restauranteur Robert Earl. END_OF_DOCUMENT_TOKEN_TO_BE_REPLACED

This new fast-casual restaurant will open its flagship location in Disney Springs.  END_OF_DOCUMENT_TOKEN_TO_BE_REPLACED

If you’ve found your parking spot by using Planet Hollywood’s giant globe-meets-spaceship as a landmark, get ready for a change.

As we mentioned in a previous post, we now have confirmation that the iconic restaurant will be undergoing a major transformation in the near future. The makeover will take place to ensure that the restaurant’s decor is consistent with the rest of Disney Springs. (Read more about the transformation of Downtown Disney to Disney Springs here.)

The star-themed eatery will transform into Planet Hollywood Observatory, and will be modeled after a turn of the century (20th century, that is) observatory, a feature that a town might have had at the time.

The new motif will incorporate a high-tech planetarium inside, thus enabling guests to “dine among the stars.”

But if you’re sad to see the Hollywood memorabilia go, don’t be. Much of it will stay put, as the restaurant and lounge will still feature props and costumes from film. In addition, large movie screens will play movie features as you dine. (You can take a look at the current atmosphere and menu in our review here.) The outside area will also transform with brick surrounds, and the pole that has hosted the neon “Planet Hollywood” sign will be turned into a END_OF_DOCUMENT_TOKEN_TO_BE_REPLACED