Now that Univeral Orlando has successfully had its plan approved to reopen its theme parks to the public on June 5th, Disney World is about to undergo the same process.

Disney World will be presenting its plan to Orange County Mayor Jerry Demings at 10AM Eastern tomorrow morning. If accepted by the Mayor and his committee, it will be passed to Florida Governor Ron DeSantis for final approval along with a possible reopening date for Disney World’s theme parks.

Florida’s Orange County Economic Recovery Task Force will vote first on the plan before submitting it to the Governor’s office. SeaWorld is also expected to present its reopening plan tomorrow as well.

In preparation for tomorrow’s big meeting, an Orange County Inspection team visited Disney World and SeaWorld today to determine if they were in compliance with recommended guidelines.

Disney has tweeted that they are announcing their plan tomorrow as well: 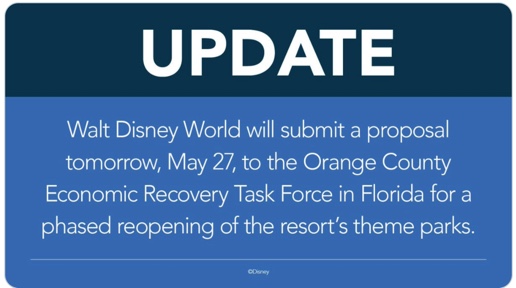 We’ll continue to follow this story as it develops.

See what our experience at Disney Springs has been like since some of the shops and restaurants have recently started to reopen here!

When do you think Disney World will announce its reopening? Let us know what you think in the comments below.