While there are some unexpected and new changes happening around Disney World, we have been thrilled to see so many projects pick construction back up now that the parks are open! 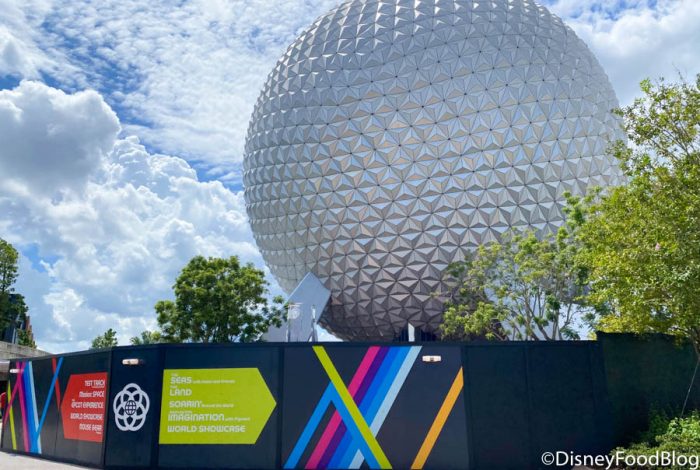 The pink Cinderella Castle just had its moat filled in, the Grand Floridian Walkway has continued to near its completion, and ALL the construction on EPCOT’s France Pavilion is charging full steam ahead!

While some projects have been put on pause, the EPCOT Transformation has continued to move forward with new entertainment, attractions, and more! Since Disney World’s 50th anniversary is next year, there will (hopefully) be some amazing experiences appearing soon. EPCOT’s next big nighttime spectacular will be Harmonious, complete with lasers, fireworks, dancing fountain, and HUGE floating set pieces.

While @bioreconstruct was over the parks today, we were given an aerial look at the construction on Harmonious. There are currently four barges being built for the show’s debut!

Aerial look at 4 barges of EPCOT's new HarmonioUS show. These will have rotating arms, and 2 of the barges are now getting side panels hiding the arms from view. Compare to earlier Tweet in this Thread. pic.twitter.com/0M89FfyYhZ

Disney World has also started to redesign the entrance to EPCOT that will be a part of the park’s transformation. Although we were able to spy the new pylons that Disney installed at the front of the park as a nod to its past decorations, the aerial view shows the area surrounding the pylons. The expanse area will also have greenery, a bigger walking area, and more when construction is completed.

Aerial view of work in progress on the signature fountain of the EPCOT entrance plaza.

The clear pylons are currently being held in position by a frame at center. The bench of the fountain is protected by sections of former resort hotel carpeting. pic.twitter.com/wf3JD4oh4F

On top of the construction on the PLAY! Pavilion in the park, we’ll continue to keep checking on the progress with the rest of the projects moving forward in Disney World!

Find out everything you need to know about the projects coming to Disney World here!

What new projects are you looking forward to the most? Let us know in the comments below!

« Want to Be Surrounded by AMAZING Cookies All the Time? Gideon’s Bakehouse is Hiring!
NEWS! There’s a Dole Whip BEER in Florida (But It Keeps Selling Out)! »