This week tends to be one of Disney World busiest. 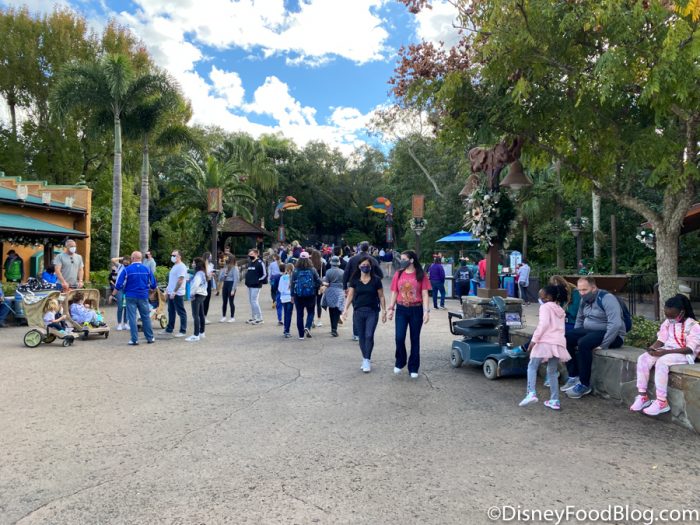 With many people off work for the holidays and Christmas celebrations wrapped up, it’s the perfect week to take a vacation — except for the fact that lots of other people think so too! We saw BIG crowds over the weekend, and those haven’t stopped yet, with incredibly long lines for attractions and booked-up Disney Park Passes. We stopped by the parks today to see what things are like, and we encountered some ridiculously long lines for Disney rides!

We knew we were in for a wild day when we spotted that the Space Mountain queue was stretched through the majority of Tomorrowland! The line ended over by Tomorrowland Speedway, which is MUCH longer than we typically see it.

Wanna see where the line for Space Mountain ends? pic.twitter.com/9dHB28pZ3J

With social distancing, an hour-long line takes up A LOT of space!

The queues for Mad Tea Party and The Many Adventures of Winnie the Pooh got so long that they nearly merged together! The line for Winnie the Pooh stretched past Cheshire Café and towards Cinderella Castle…

Here’s the line for Winnie the Pooh in Magic Kingdom. pic.twitter.com/2Z04kJdGmY

…while the line for Mad Tea Party wrapped around the attraction and then some!

Flight of Passage was a 90-minute wait at the time when we checked out this queue today.

90 minute wait for Flight of Passage in Animal Kingdom. pic.twitter.com/mG5PCrypdj

We found the end of the line back in Africa by the Harambe Theatre, and while we’ve seen the line end back here before, it’s still quite the walk from this spot to where you board the ride.

Things weren’t much better at DINOSAUR in Disney’s Animal Kingdom, where Cast Members were having to direct traffic crosswalk-style around the backed-up line. The Cretaceous Trail was used as extra queue space, because 80 minutes worth of people is a LOT!

The line for Dinosaur is 80 minutes long and they’re having to stop traffic to let it cross and they’re using the Cretaceous trail! pic.twitter.com/UVb7z8HtjA

An 80 minute wait time for this ride is definitely higher than normal. Animal Kingdom is hoppin’ today!

And in a shocking twist, the line for Expedition Everest was actually 10 minutes shorter than DINOSAUR, but still at a whopping 70 minutes! We found a similar problem here, where Cast Members were directing traffic to keep the crowds separate from the queue line.

That’s what the lines are looking like so far today in Disney World, so if you’re heading to the parks this week, we suggest you plan for ways to entertain your family in line! We’ll be keeping an eye on the crowd levels and the New Year’s festivities, so stay tuned to DFB!

Click Here to Find Out Why January 1st is So Important in Disney World!

What’s the longest you’ll wait for a Disney World ride? Tell us in the comments!