We got some major Disney World announcements recently. 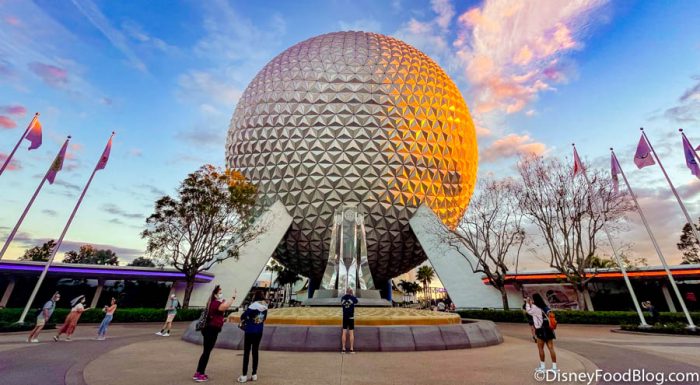 We’ve been keeping a close eye on the construction of Harmonious taking place on EPCOT’s World Showcase Lagoon. And it’s made some serious progress! Let’s share a little Harmonious construction timeline, shall we? The first barge and signage about the show emerged in December and LOTS has been added since then. 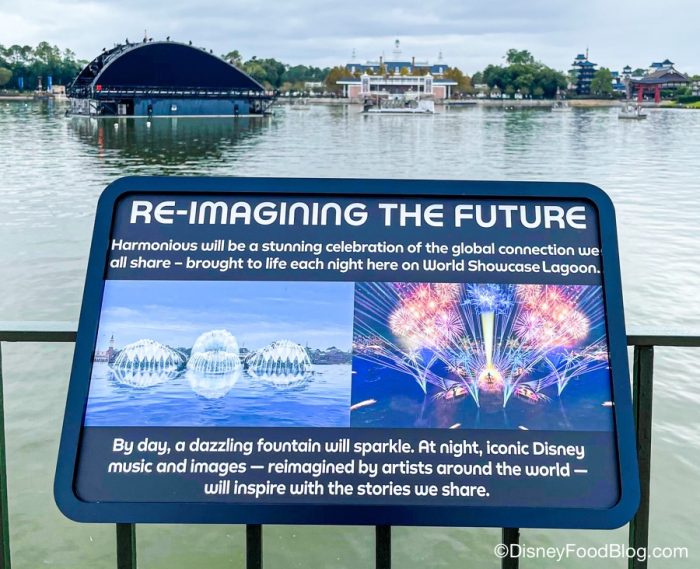 Later on, a second barge appeared. We were able to see some testing of the mechanical arm attached to the barge that will be used in the show. 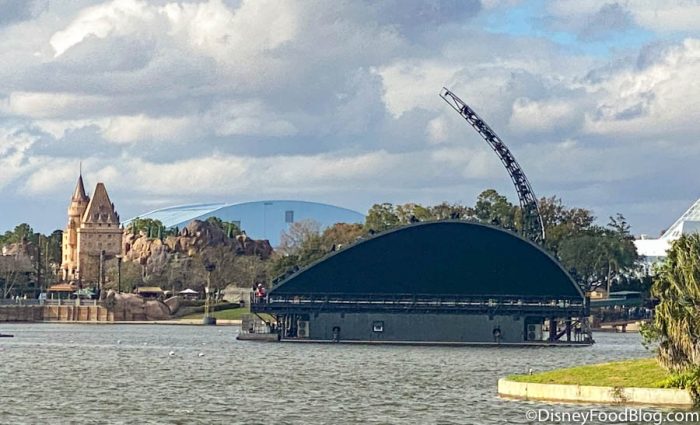 We also saw the screens on the barges lit up in the form of a grid, which is often used for projection mapping. Recently, the centerpiece of the show made its way onto World Showcase Lagoon. It’s a six-story tall ring that will have moving fountains and lights, pyrotechnics, and a high-density water curtain. 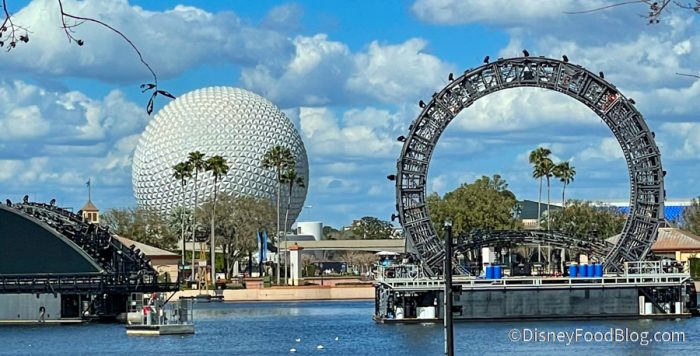 And that’s not all, folks. We also saw special WATER effects being tested on one of the barges!! The barge’s arm sprayed a curtain of water streams across the sky.

Alright, so now that we’re up-to-date on all the serious progress that this show has made, we have to ask this question. Why hasn’t Disney announced a debut date for Harmonious? 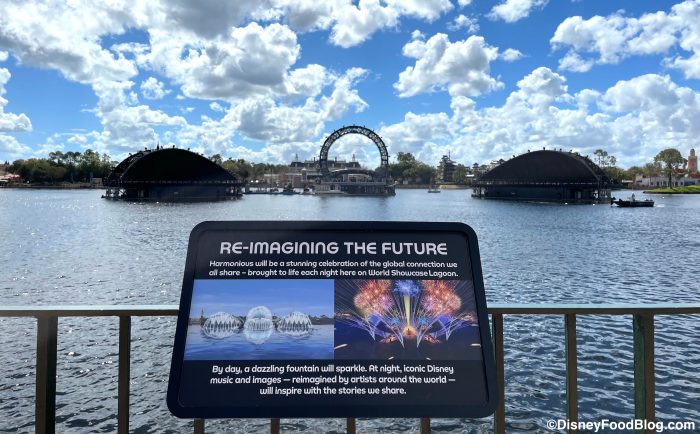 A brand new fireworks show seems like the perfect way to kick off the celebrations for a major milestone (like a 50th Anniversary)! And with all of the new additions and testing that we’ve seen, it’s clear that Disney’s preparing to have it ready. But still, the show doesn’t have an opening date. 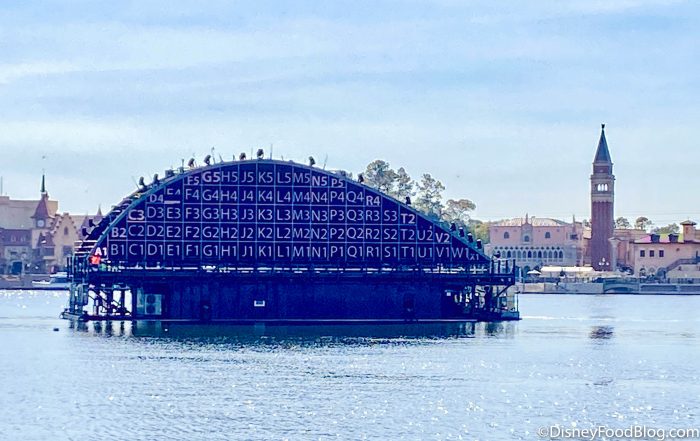 Nighttime shows like Happily Ever After and Fantasmic! have been suspended since the parks reopened last summer. Therefore, making a big announcement about the debut of a brand new fireworks show would basically open a big ol’ can of worms for the rest of Disney World entertainment. 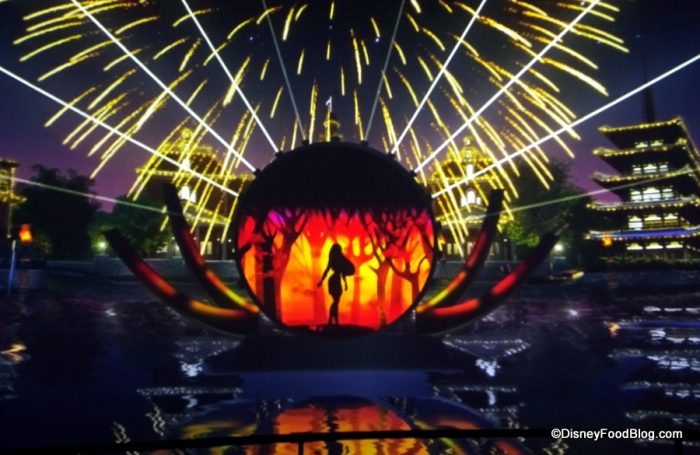 If one fireworks show opens, then what does that mean for the rest of them? Guests would expect the return of all other nighttime shows, which Disney may not be able to deliver just yet. With all that said, we think there’s still a possibility that Harmonious could debut for the 50th Anniversary but Disney is holding off on an announcement for the time being.

Not sharing the opening date now, also gives Disney to release more news that may draw in crowds and excited guests later on. It gives fans something else to be excited about! 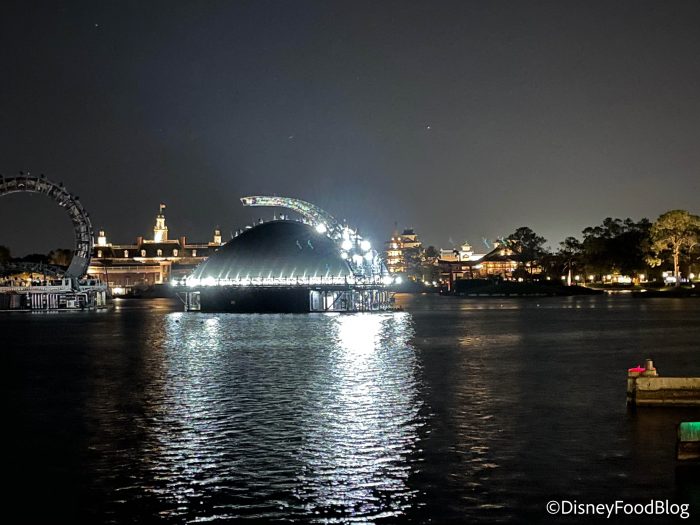 Festival of the Lion King is set to return sometime this summer, so we could see the gradual return of entertainment throughout Disney World. As for right now, we have the opening of Remy’s Ratatouille Adventure and La Crêperie de Paris to look forward to in EPCOT on the anniversary.

We’ll be sure to bring you all of the latest Disney World news, including the 50th Anniversary! So, be sure to check back with us!

When do you think Harmonious will debut? Tell us in the comments!

« Want to Work in Disney World? Here’s One Place Where You Could!
The Disney Magnet You’ve Been Waiting For Is FINALLY Coming! »