It’s time to check in on all the construction going on around Walt Disney World again!

It’s time to check out all the construction progress!

Last week we checked in on the construction progress over at Magic Kingdom and Disney’s Polynesian Village Resort, and now we’ve got more updates on the major attractions, shows, and more coming to the parks soon! So, let’s get to it!

Over the past few weeks, we’ve been watching as Disney installs blue netting on the exterior of the new ride TRON: Lightcycle Run in Tomorrowland. And, we spotted more work being done recently! The large construction crane may be gone, but there is still plenty of equipment lifting workers up to the canopy to continue working on the netting. 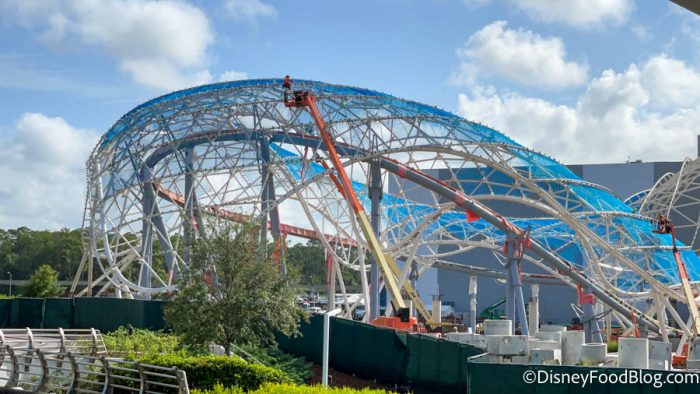 Plus, it’s starting to extend over to the next canopy as well! 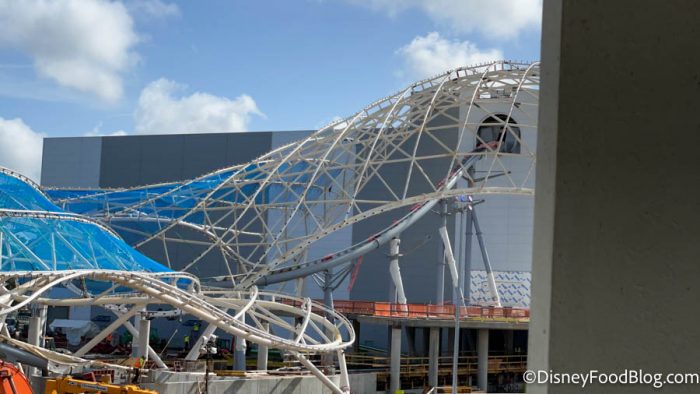 There’s a lot of track here!

While there does appear to be a lot of progress happening on the attraction, Disney still hasn’t shared an update on when the ride will officially open in the park, but we’re keeping an eye out!

Last month, Disney announced that there would be a NEW daytime show coming to Disney’s Animal Kingdom called Disney KiteTails! The show is set to debut for the Walt Disney World 50th Anniversary celebrations on October 1st and we’re starting to see the beginnings of construction in the Discovery River Amphitheater. 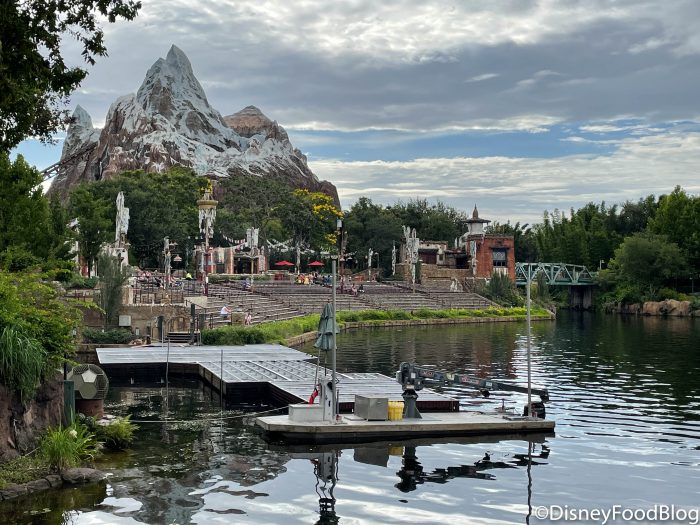 Once open, guests will be able to enjoy a show filled with GIANT three-dimensional kites in the shape of Disney characters like Simba, Zazu, Baloo, and King Louie over the water. Plus, performers will be flying their own windcatchers and kites at the front of the theater.

Of course, we’ll be keeping track of the rest of the construction in the area and bring you a look at the new show once it debuts!

Over at EPCOT, the 2021 Food & Wine Festival may have kicked off, but there is still plenty of construction going on around the park! Most recently we noticed that the water beds in Future World West had been drained and the fountains were turned off. 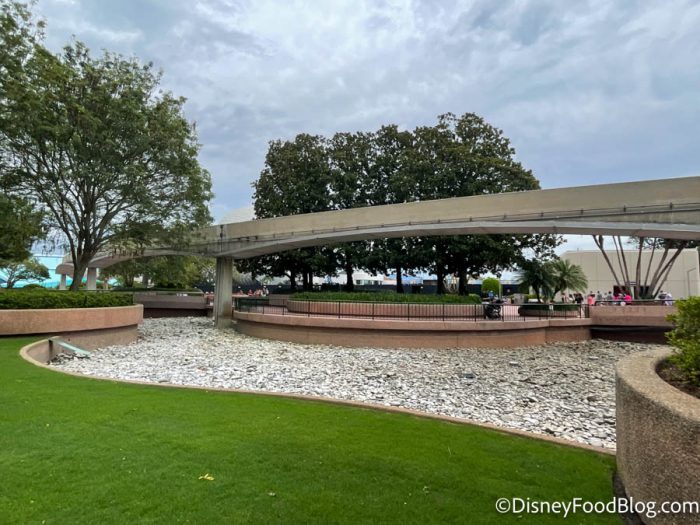 We’ve seen Disney drain fountains and water beds from time to time for routine maintenance and they’re normally back to flowing pretty soon after.

And, more work is underway to prepare for the 50th Anniversary celebrations! Beginning October 1st, all four park icons will transform into “beacons of light” and Spaceship Earth’s makeover is already well underway.

Now you can find more of the lights that will illuminate the icon on the bottom. 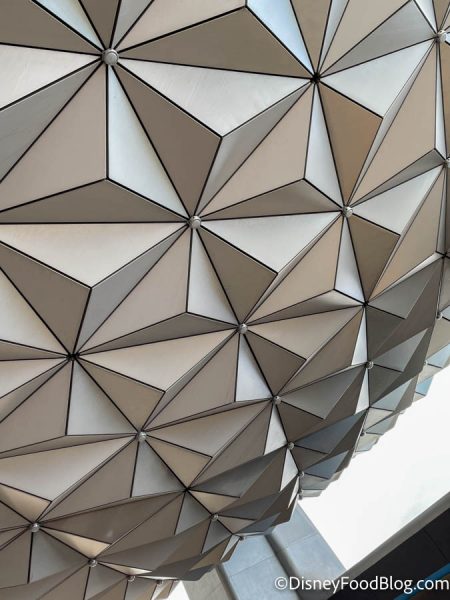 Here’s a quick refresher on what it will look like at night — the lights will add purple, blue, and green colors which will match the lighting in the rest of the new entrance area.

We’ve previously seen the lights installed towards the top of Spaceship Earth, so there are only a few more sections to go before it will be ready to glow in October.

We also spotted more construction on the new attraction, Guardians of the Galaxy: Cosmic Rewind! It had been a long time since we had seen progress on the exterior of the building, but over the past few weeks, Disney has been adding new roofing. And, now there’s even more! 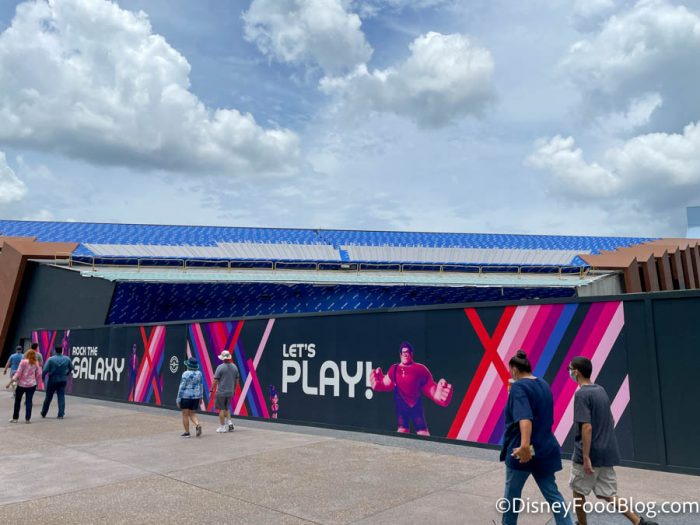 The installation hasn’t been going fast by any means (we’ve been seeing roofing slowly added for the past three weeks), but we’re starting to see how this building will transform into what’s depicted in the concept art!

Disney hasn’t shared an update on when they expect the ride to open, so it could still be a little while before we get to travel through the Marvel universe.

Read all about Guardians of the Galaxy: Cosmic Rewind here!

And, in case you haven’t been keeping up with us, the EPCOT Monorail line is set to reopen on July 18th (!!) and it looks like the EPCOT station got a bit of a sprucing up just in time! Now you can find a brand new sign hanging over the entrance that provides information on where you’ll be able to travel. 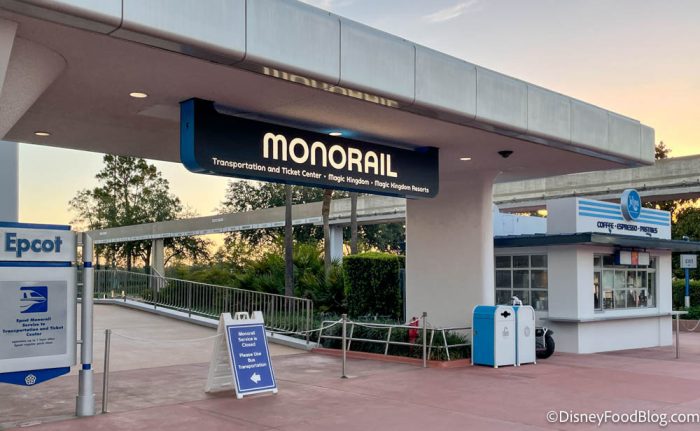 Read about the reopening of the EPCOT Monorail line here!

Our last update takes us over to Disney’s Art of Animation Resort where one of the cars in the Pixar Cars-themed area is currently undercover (literally!). 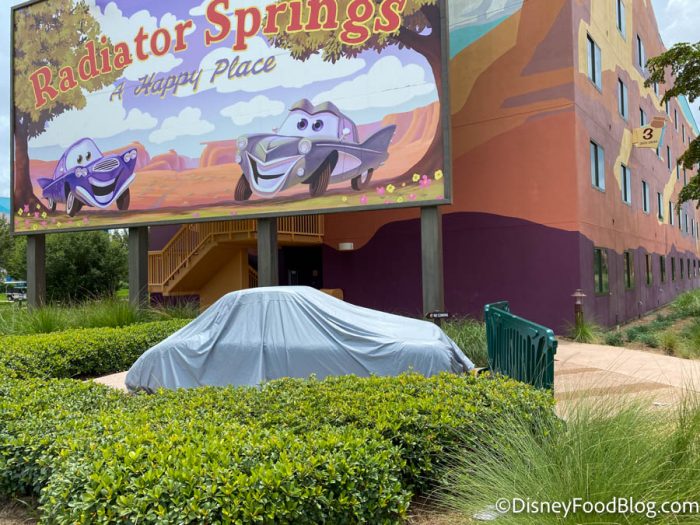 The Sheriff character has been covered by a tarp and there are a few construction gates blocking off the area to keep guests away. So, it looks like you’ll have to miss out on that photo op if you’re staying here for now.

And, that’s it for this week’s construction updates in Disney World! Be sure to catch us back here next week with more things you’ll want to know for your next trip!

Click HERE for ALL the Rides and Hotels That Are CLOSED in July in Disney World!

What construction project are you most looking forward to wrapping up in Disney World soon? Let us know in the comments!

« Here’s How to Save BIG on Disney’s Most Popular Toys!
Do You Qualify to Win a FREE Disney World 50th Anniversary Trip? »