Disney has a lot of hotels on property, with fun themes and delicious food. 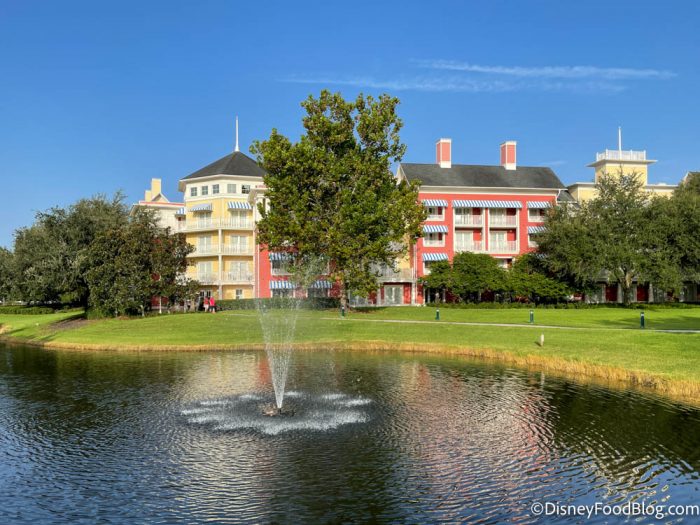 There’s been a lot of new stuff in the parks lately between World Princess Week and Halloween-time, but what about all the hotels? We’re heading to several Disney World hotels to see what’s changed this week.

Let’s start with some EPCOT-area Resorts.

Over at the BoardWalk Inn, the BoardWalk Ice Cream stand is now serving milkshakes! We tried a couple of different flavors, including this Cookies and Cream Currents one. 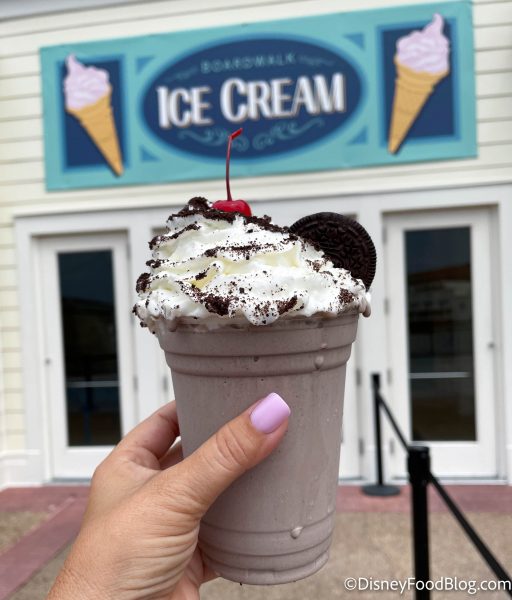 Other flavors included Vacation Vanilla, Strawberry Riptide, Coastal Chocolate, Plant-based Vanilla Cyclone, and Plant-Based Chocolate Cyclone. All the milkshakes on the menu were $5.49.

Check Out Our Review of the Milkshakes Here

On our way, we noticed some construction going on.

Outside the shops at the BoardWalk, Cast Members were hard at work replacing the pebbled walkways. 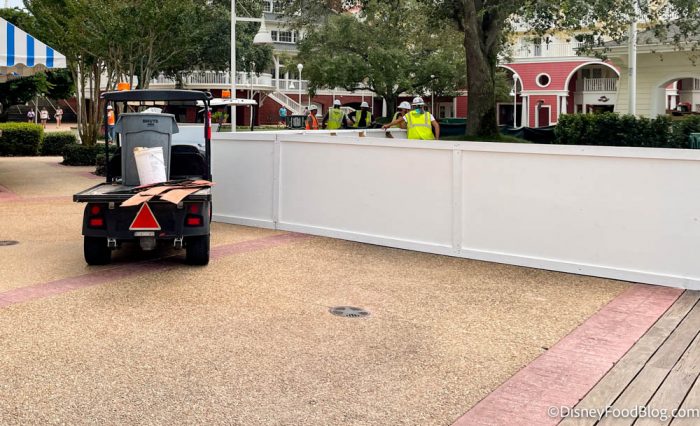 The area where you can usually find bike rentals was walled off for this construction. 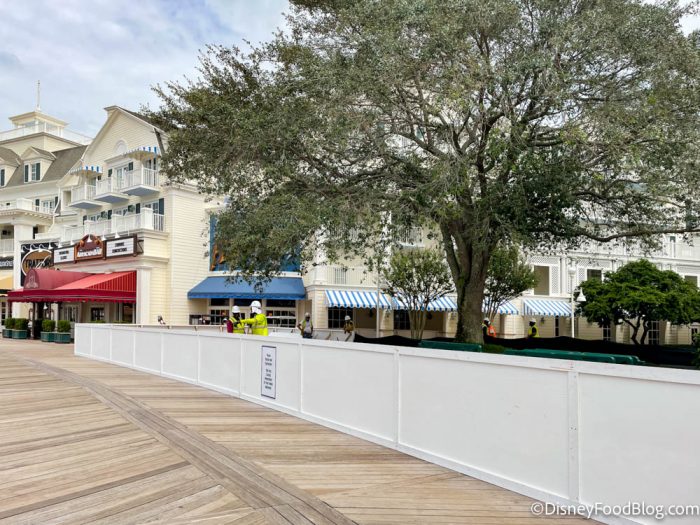 We’ll be back soon to see what the finished product looks like!

We stopped in the Screendoor General Store to check out any new merchandise. We found this Abracadabar hat for $27.99, which is themed after the Bar and Lounge on the BoardWalk. 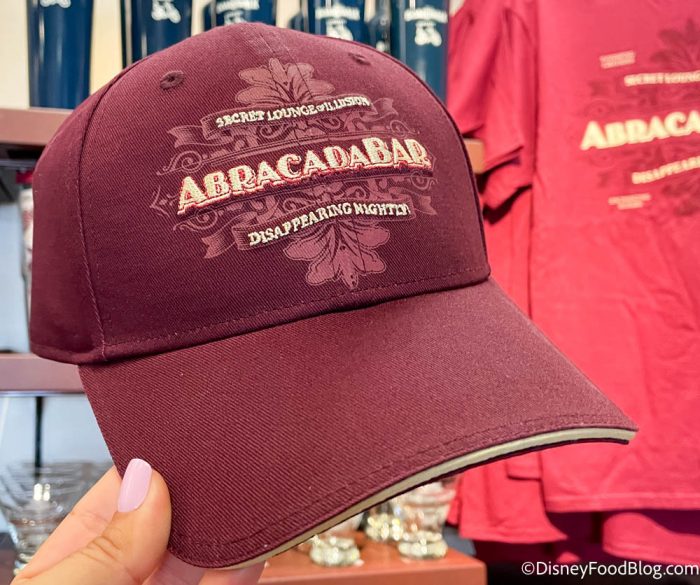 There was also a new beach bag, which had a basket bottom and cute stripes on the fabric. 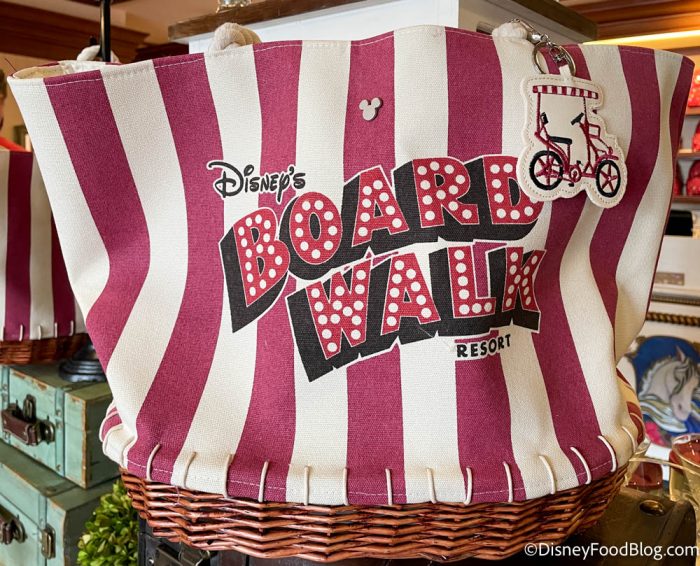 This bag was $64.99 at Screendoor General Store.

We headed over to the Yacht Club to see if anything new was going on there! Sure enough, there’s a lot of construction going on to update the exterior of the rooms. 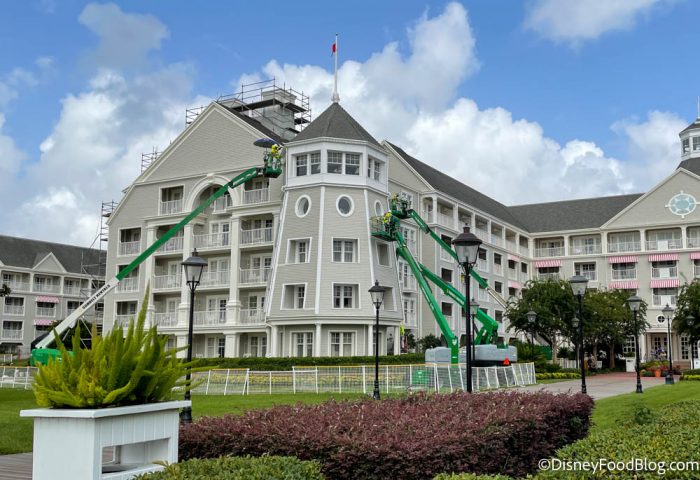 We saw teams working outside on scaffolding for touch-ups to the paint and other repairs around the building. 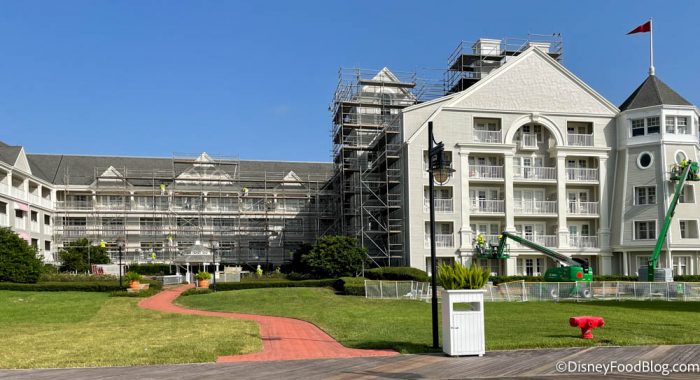 Let’s go check out the merchandise at Yacht Club as well!

In the Marketplace, we found new Yacht Club-themed clothing by Vinyard Vines, including this blue polo shirt with “Disney’s Yacht Club Resort” embroidered on the front. 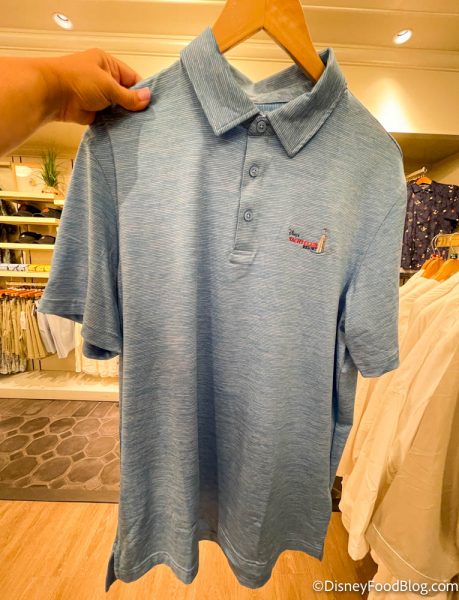 The shirt was $99.50. There was a new jacket as well, also by Vinyard Vines with embroidery on the front. 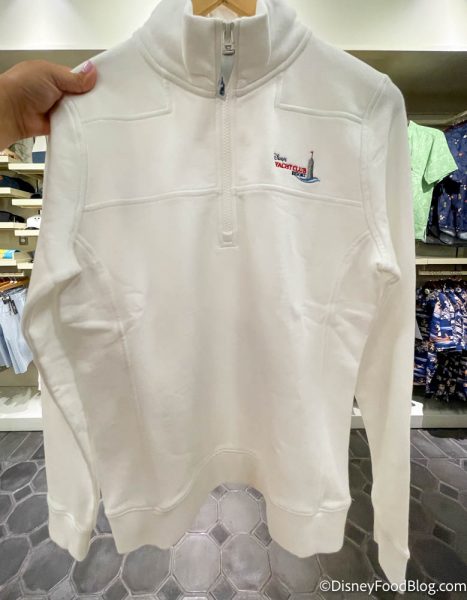 You can get the jacket at the Marketplace for $128.

Jumping over to Disney’s Riviera Resort, we tried a new Disney princess-themed dessert, which came out as part of the World Princess Week in Disney World. This is the Belle Cheesecake. 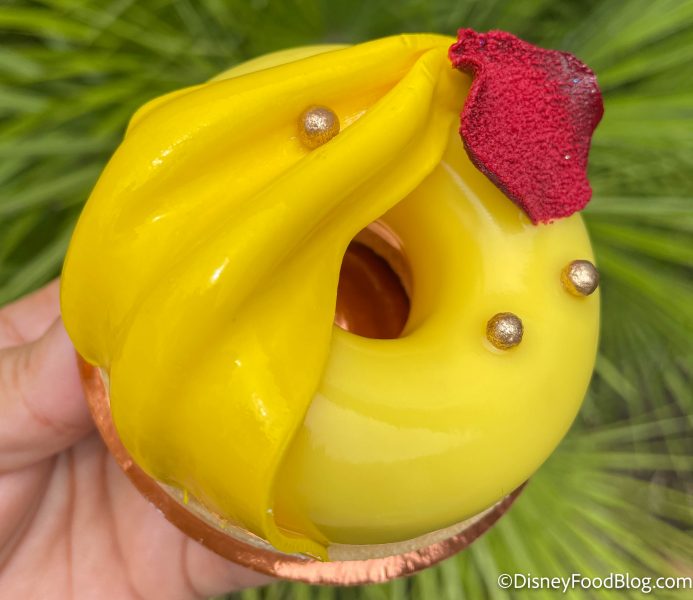 The cheesecake was on a tart base with a lemon curd inside. The dessert was $6.99 at Le Petit Cafe in the Riviera Resort.

Check Out Our Full Review of the Cheesecake Here

After we enjoyed our Belle cheesecake, we stopped by the gift shop to see if there was any new merchandise. We found a new Riviera-themed ornament with a hidden surprise inside — Mickey and Minnie! 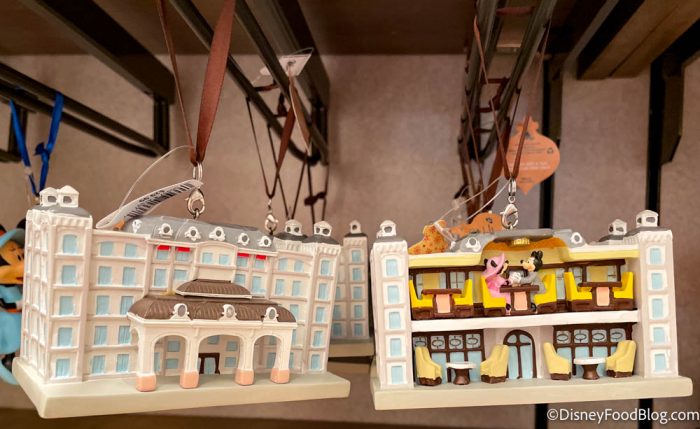 You can get this ornament at the Riviera Resort for $29.99.

We found more new princess-themed desserts over at Disney’s Polynesian Village Resort. This one was a Moana cupcake, with Moana and her boat’s sail on top. 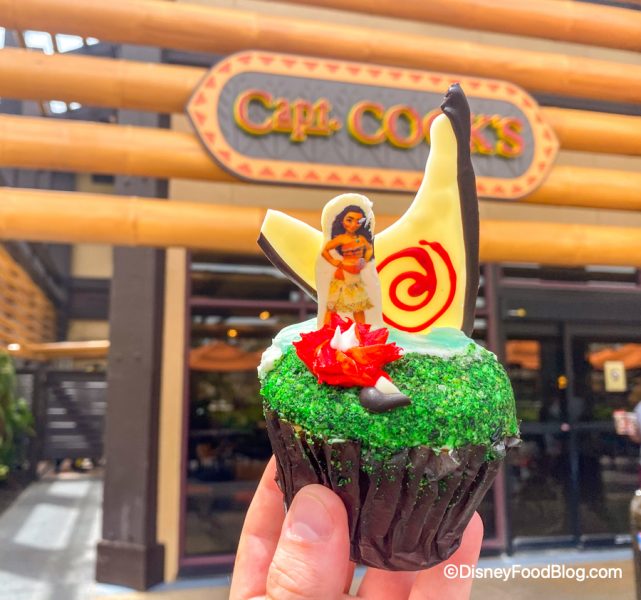 This looks so cute!

It was a Vanilla Cake with Coconut Mousse, filled with Vanilla Buttercream. The details on top were made of White Chocolate.

Check Out Our Full Review of the Moana Cupcake Here

We had time for one more Disney princess dessert, so we headed over to Disney’s Saratoga Springs Resort and Spa. There, we went to the Artist’s Palette to try the new Snow White Cupcake. 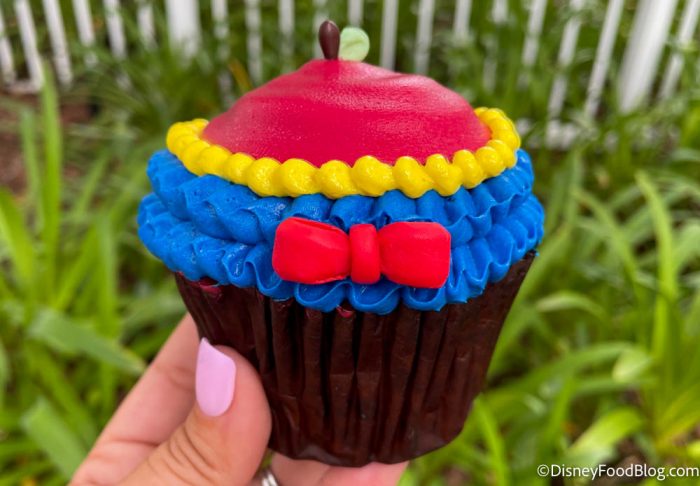 This cupcake had a spiced apple pie filling inside and was topped with Caramel Buttercream, Red Chocolate Fondant, and a Red Bow made of White and Milk Chocolate.

Read Our Full Review of the Snow White Cupcake Here

While we were there, we stopped in the gift shop and found these cute new Disney character pens! There was one for Groot… 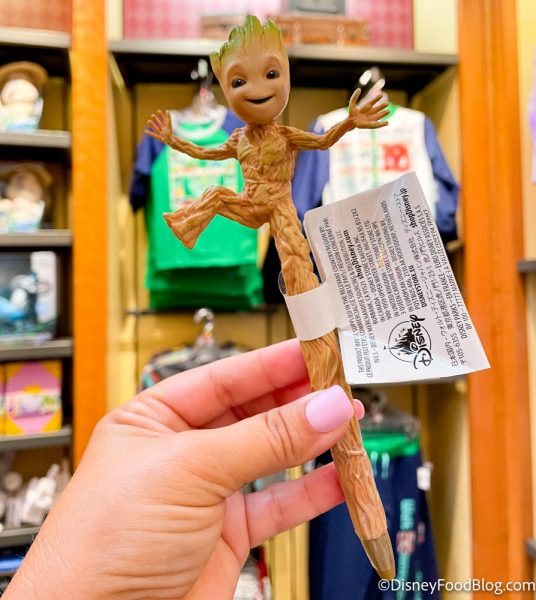 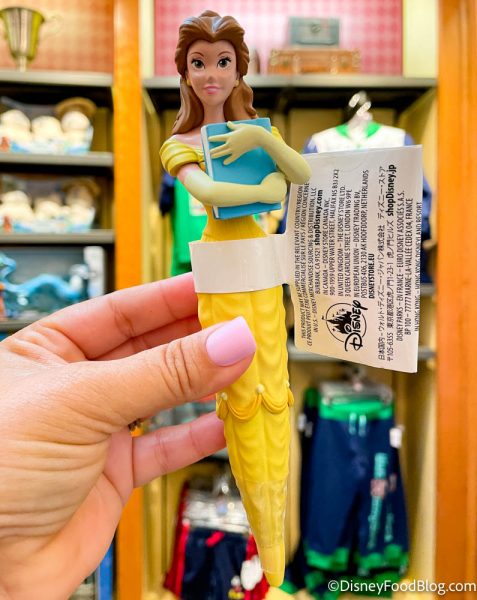 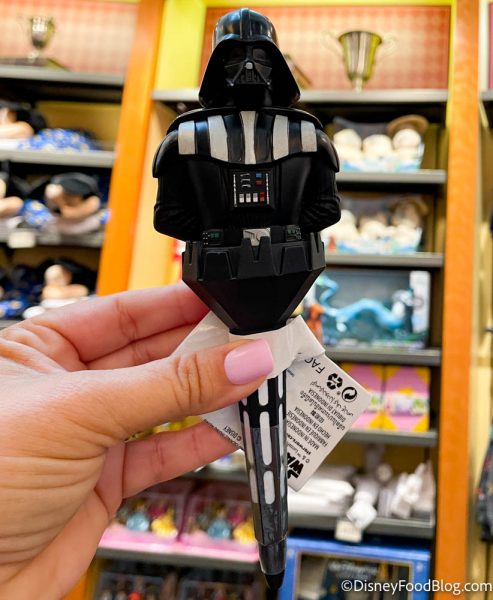 Each pen was $12.99. We also noticed a display in the hallway of Saratoga Springs, which was a Cast Member Canoe Decorating Contest! We stopped to check out some of the entries, including ones themed for the resort… 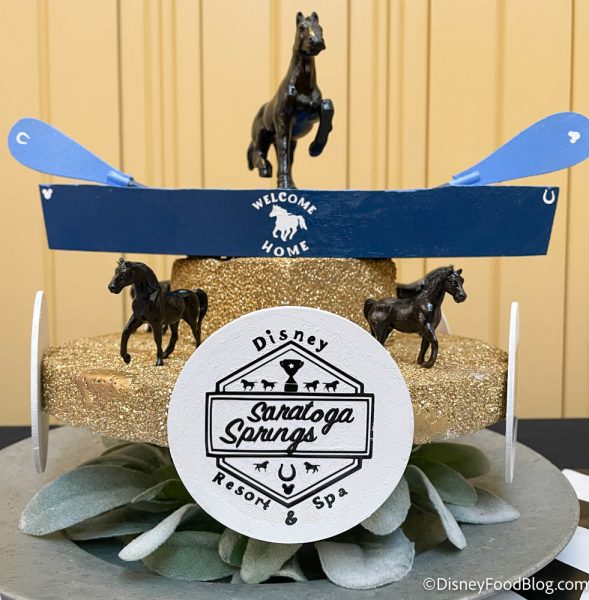 …a classic one for Moana… 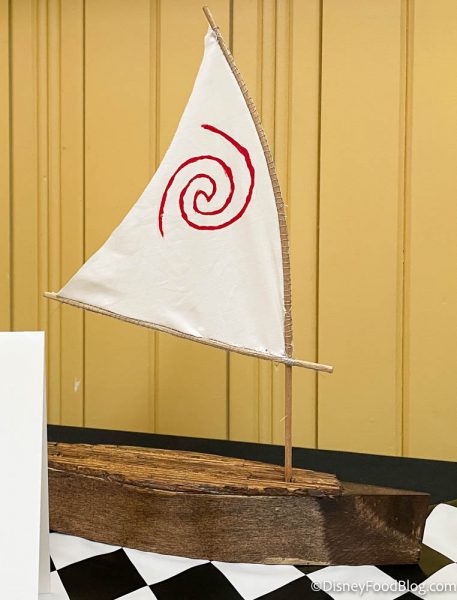 …an intricate diorama with a Luca theme… 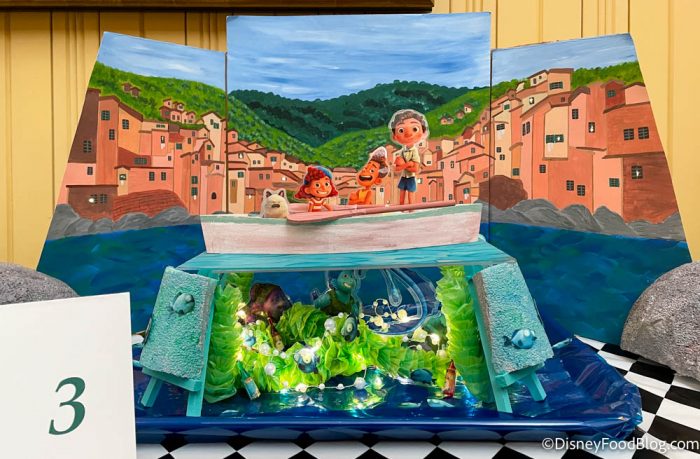 …and a super cute canoe for Anna and Olaf from Frozen II. 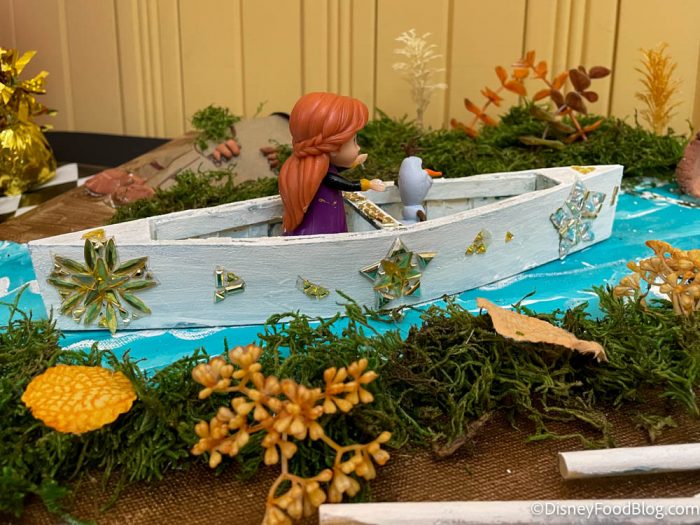 That’s it for our tour of what’s new at the Disney World hotels! Keep following DFB for more updates around the theme park.

Which Disney World hotel is your favorite? Tell us in the comments!