Disney World has been announcing and releasing some new technology features lately. 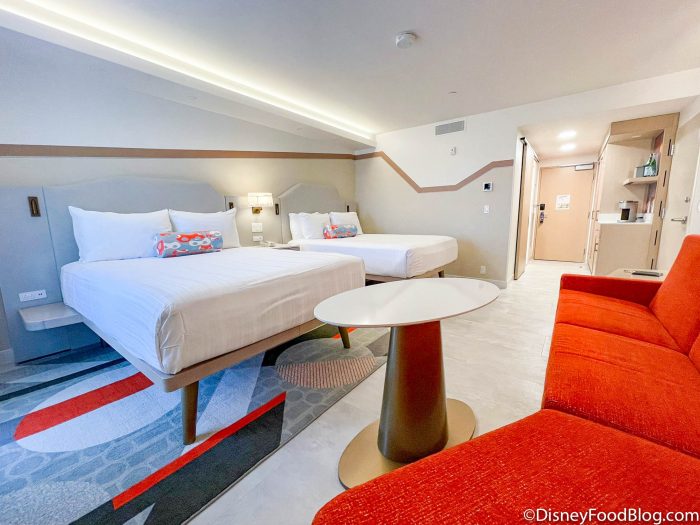 Many more spots are now available via Mobile Order; not too long ago Disney launched MagicMobile — turning your phone into your MagicBand in many ways, and recently we shared some details about a new service that’ll be available through Amazon Alexa in your Disney World hotel room and at home. Just how will this new Disney service through Amazon’s Alexa enhance your hotel stay? Today we got some updates on just that!

Recently, Disney announced a new service called “Hey Disney!” Disney has characterized this as a “custom voice assistant” that uses “Alexa technology for supported Amazon Echo devices.” The “Hey Disney!” voice assistant will work alongside Alexa and will respond to vocal prompts. There will be an at-home component to “Hey Disney!”, but for now we’re going to focus on what it’ll do while you’re in Disney World. 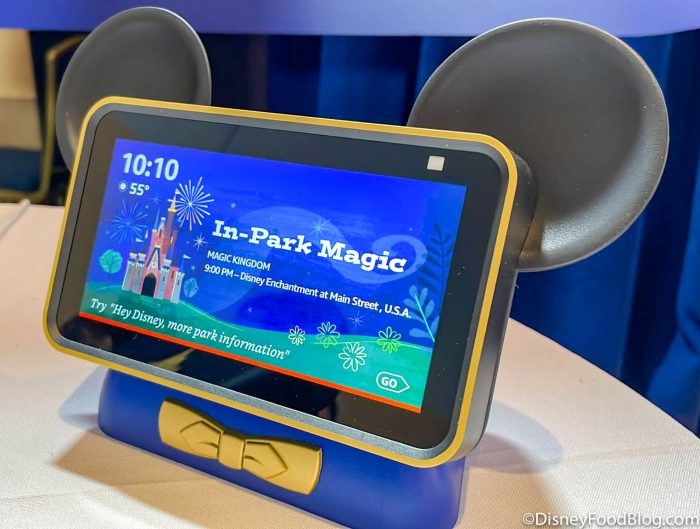 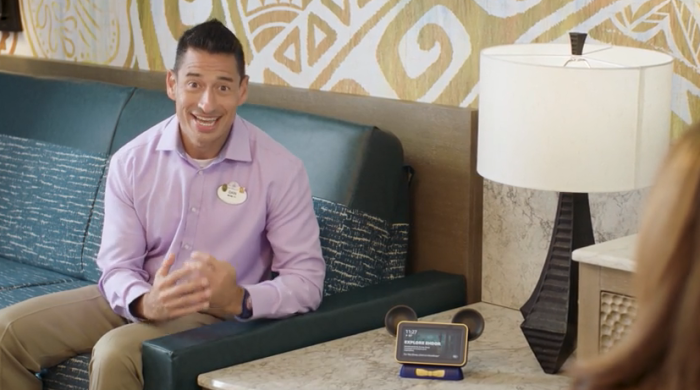 “Hey Disney!” is a “magical companion” that can introduce guests to Disney characters, set alarms (useful for those early morning wake-ups during vacation), answer questions, and even guide guests to surprises. While staying at a Disney World hotel, “Hey Disney!” will be able to make your vacation easier by answering your questions and even fulfilling certain requests. 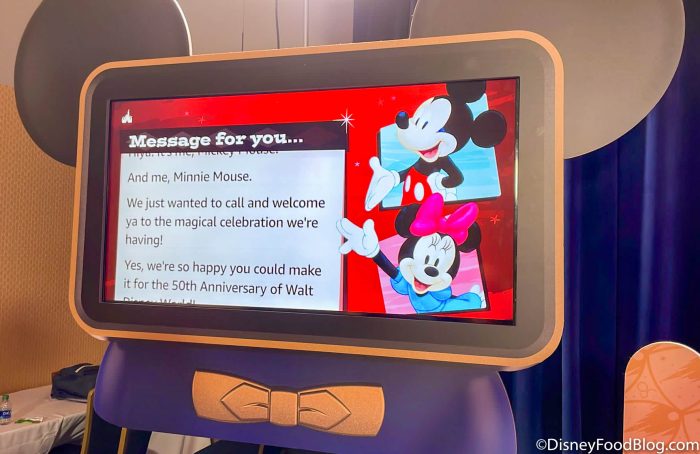 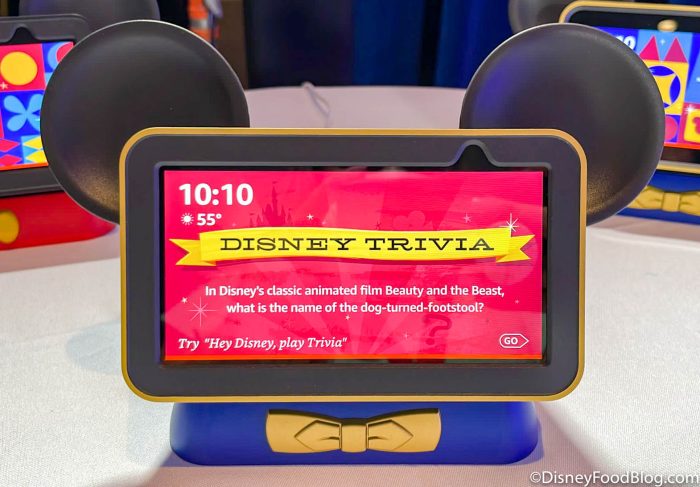 You’ll also be able to talk to “Hey Disney!” to request things like extra blankets or pillows (Disney notes you’ll be able to say: “Hey Disney! Can we have some extra towels?”), which will then by delivered by Cast Members.

“Hey Disney!” will also be able to connect guests to new character experiences. During a media preview event, one of the Disney representatives asked the service for a joke and Dory appeared on the screen. Of course, we just have to share Dory’s joke with you — what kind of fish comes out at night? A starfish of course! 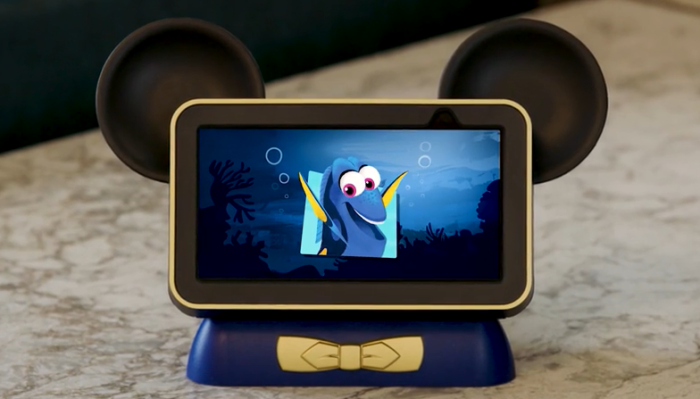 According to a Disney press release “‘Hey Disney!’ will make the services Alexa users know and love – weather forecasts, timers, alarms, etc. – magical with the help of popular characters such as Mickey Mouse, Olaf, C-3PO and many more.”

“Hey Disney!” features a new character, the Disney Magical Companion, who, according to Disney, “will help guests discover more than a thousand magical interactions, such as hearing special greetings and jokes from authentic Disney character voices, asking trivia questions and exploring audio environments inspired by Disney films and destinations.” 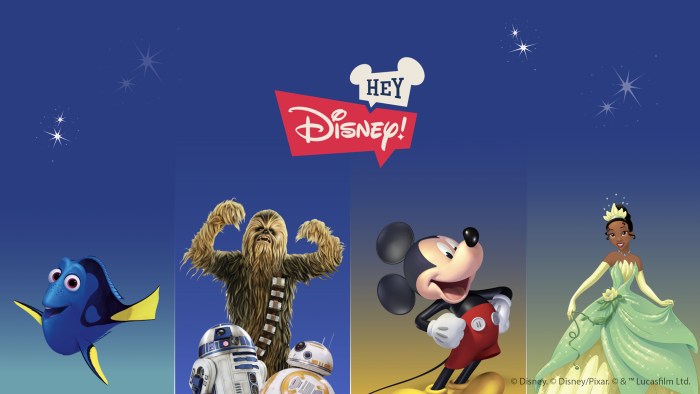 As we mentioned, “Hey Disney!” will be available for FREE during Disney World Resort hotel stays, once it starts to roll out in 2022. At home, fans will be able to purchase “Hey Disney!” once it is available through the Amazon Alexa Skills store.

Additionally, guests will be able to grab 2 new exclusive Mickey-inspired stands for the Echo Show 5. There will be one design featuring Mickey’s classic red shorts… 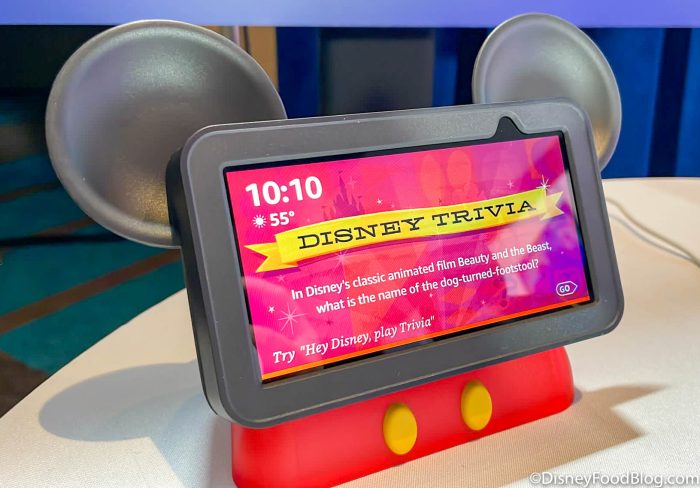 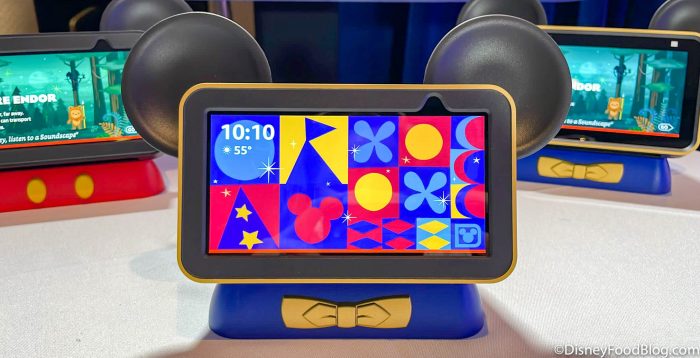 We’ll keep an eye out for more details about the “Hey Disney!” service, and we’ll let you know what we find!

Click here to see 9 Disney games you never knew you could play on your Amazon Alexa!

Are you excited about this Amazon feature? Tell us in the comments!

Disclosure: In nearly all circumstances, Disney Food Blog writers and photographers pay full price for their own travel, hotel, food, beverage, and event tickets. We do this because it’s important to us as journalists to ensure not only that we give you unbiased opinions, but also that you can trust us to do so since we’re paying our own way. On rare occasions, when we are invited by a company to attend a preview as media, and when we choose to accept that invitation, we will always make you, our readers, aware of that situation. Today, we were invited by Disney World to attend their media preview of various new things coming to Disney World, including the Hey Disney! service. Note that when we attend events as media we are 1) Not required to review that event/food on any of our channels, and 2) Not required to review that event/food favorably. You can always count on DFB to give you a 100% unbiased and honest review of any event that we attend, food that we eat, or beverage that we drink. You can see more in our Disclosure Policy. Thank you for reading. — AJ

« DFB Video: What Does a $5,000 Disney World Trip Look Like?
They’re CHANGING MagicBands…And How You Visit Disney World Will Be Different. Get ALL the Details Here. »