We’ve already been to most of the 2021 EPCOT Food and Wine Festival booths, but a few of them didn’t open until today. 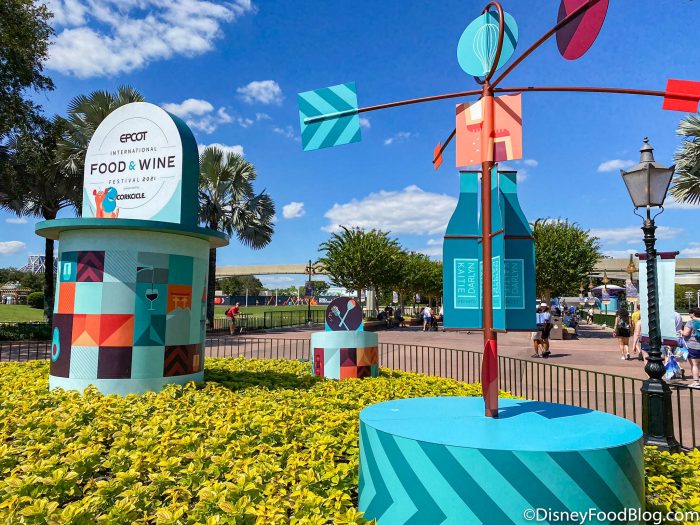 Although several of the booths were going to open on October 1st, a whole bunch of them opened early! But there were still a couple that we had to wait for, including an old favorite: the Belgium booth!

We can’t wait to try all the food here! 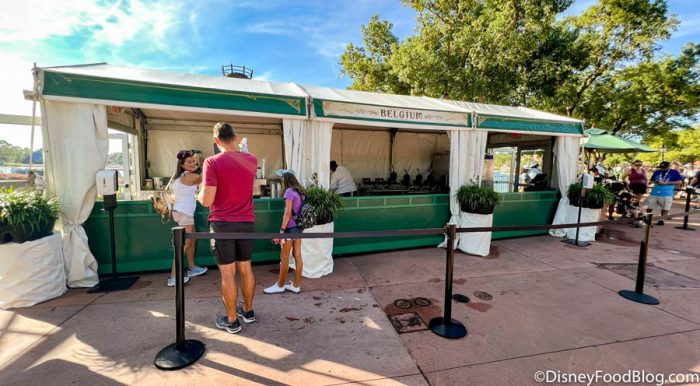 The Belgium Booth is serving up one savory dish — Beer-Braised Beef — along with two options for waffles — because WAFFLES. 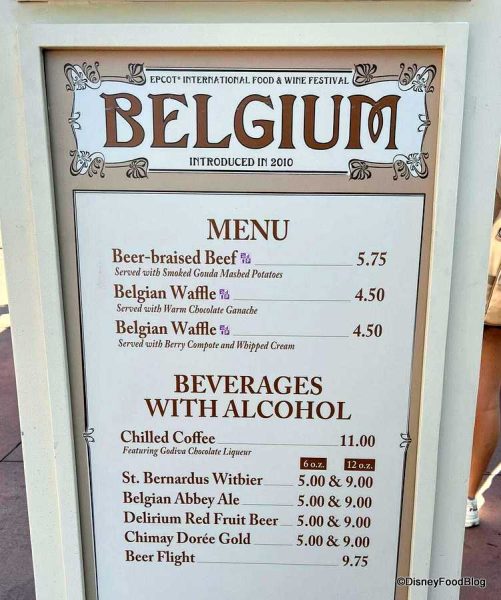 There are also several options for beverages, such as Chilled Coffee (with Godiva Chocolate Liqueur) for $11, St. Bernardus Witbier, Belgian Abbey Ale, Delirium Red Fruit Beer, Chimay Dorée Gold, and a Beer Flight. The drinks are all $5 for a 6oz or $9 for 12oz, or you can get the flight for $9.75.

Check Out All The Menus For This Year’s Festival!

Let’s get to eating!

Now it’s important to note that most of the food at the Belgium booth are returning items, including the Beer-braised Beef served with Smoked Gouda Mashed Potatoes for $5.75. 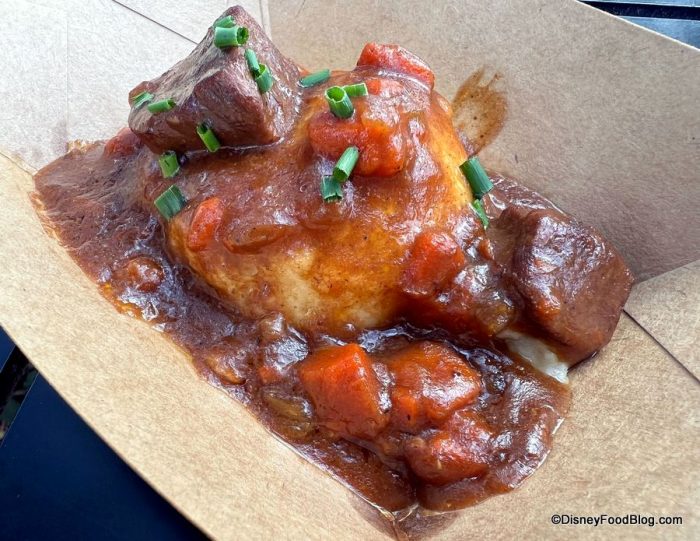 We thought this dish was really tasty — the potatoes were delicious and they tasted real (not like gross fake mashed potatoes, you know?). The flavors were punchy and strong, and it was very salty. If you don’t like a lot of salt in your food, this might be a skip for you, but we love salt so we were happy! We will say that the meat felt WAY over done, and we had to chew it forever to eat it. But the flavors — especially in the gravy and potatoes — were delicious!

We also revisited the Belgian Waffle with Warm Chocolate Ganache for $4.50. In the past, we found the consistency of the chocolate ganache to vary — sometimes it was more like a thin syrup. 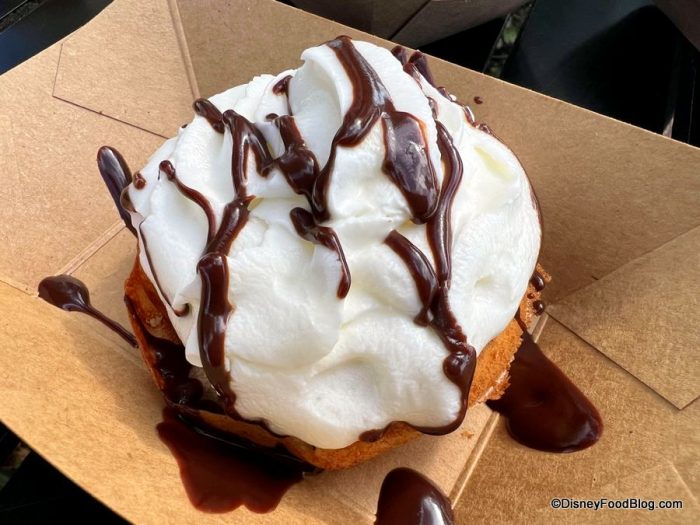 This year, the chocolate ganache tasted like normal chocolate syrup to us, and the whipped cream was pretty basic and super sweet. We think this is a great idea for little kids or picky eaters, since it’s just a cream and chocolate covered waffle, but it’s not worth the money for adults who want a unique snack. 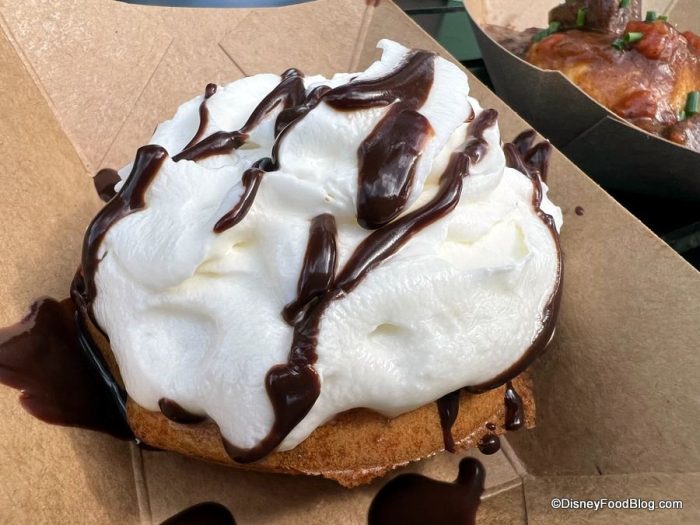 The Belgian Waffle with Berry Compote and Whipped Cream for $4.50 is usually a hit with us. We love how the tartness of the berry compote pairs with the waffle’s sweetness. 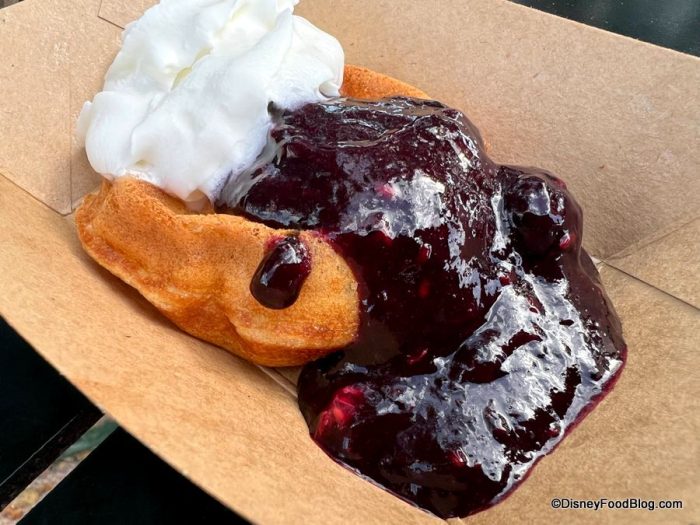 However, this time we felt like the waffle was just smothered way too much jam. The berry compote is probably a fancy sauce that pastry chefs would know about, but it just tasted like normal jam to us (and we’re pretty sure it will for anyone who’s not like a chef). In general, it’s also good for picky eaters but probably not worth your money if you want a fun, unique treat.

If You Don’t Want to Spend Money on the Berry Waffle, Make It at Home Instead! 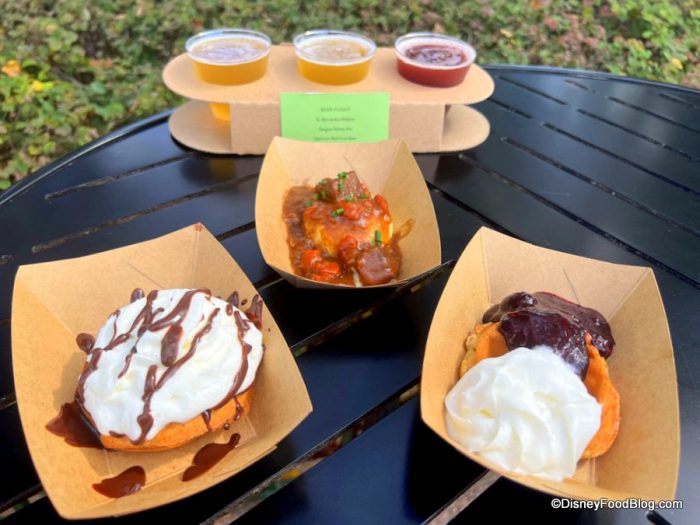 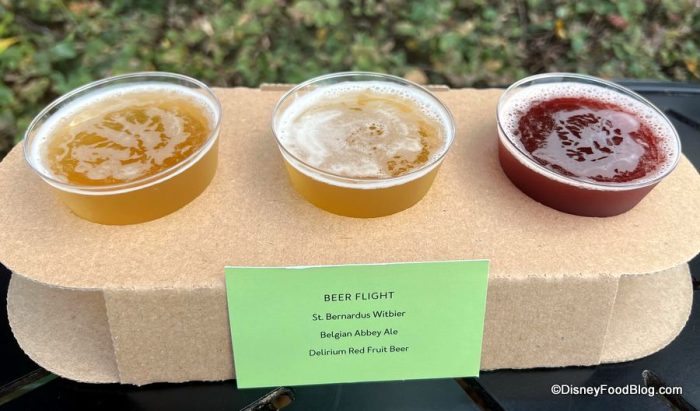 Our favorite of the beer flight was the Delirium Red Fruit Beer, which we thought was really tasty with a fruity flavor. The Cast Member told us it was the best as well, so if you won’t take our word for it, listen to her!

Get Our FREE DFB Printable For ALL the 2021 EPCOT Food and Wine Festival Booths!

In general, this booth was a little bit disappointing. We’ve enjoyed the same dishes more in the past, but they fell a little flat for us this year. The waffles are a good option for kids, but we don’t recommend spending money on them since there are so many other delicious snacks and treats around this festival. So unless you’re dying for a waffle in EPCOT, check out some of the other booths around!

Are you headed to the EPCOT Food and Wine Festival? Let us know in the comments!