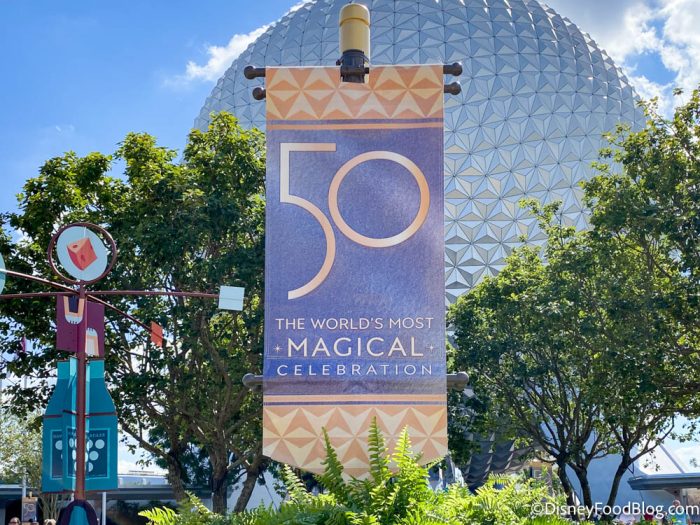 There have been some winners and also some that were…interesting. But today we stopped by one of the BEST treat spots in all of EPCOT (in our opinion, anyway) to try another 50th Anniversary treat, and (spoiler alert) this is one you won’t want to miss out on.

While we were walking around World Showcase, we decided to stop in Karamell-Küche in the Germany Pavilion in EPCOT. 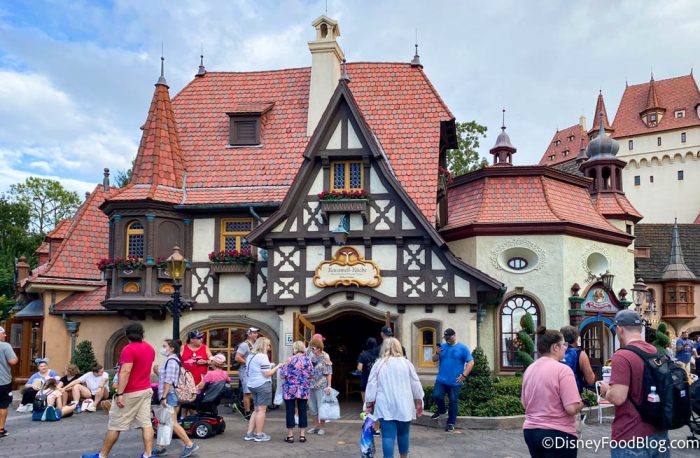 There are lots of different treats to buy (and love here), but one of our very FAVORITE ones is the salted caramel cupcake. So, you can imagine our joy when we saw that this very cupcake was available with a fancy 50th Anniversary makeover! 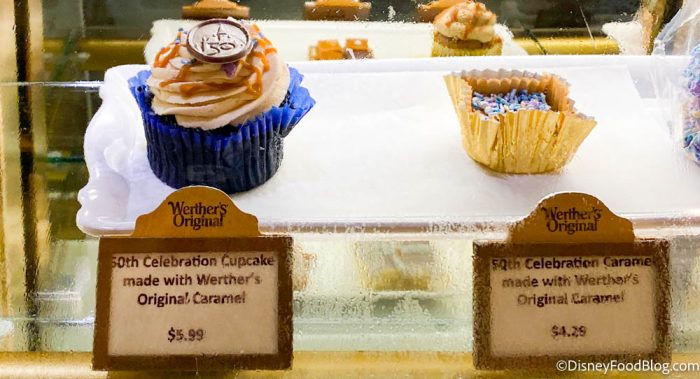 This cupcake is made of a dark chocolate cake with salted caramel buttercream frosting on top. It’s decorated with celebration sprinkles, a drizzle of caramel, and a milk chocolate “50” icon. You can get one for $5.99. 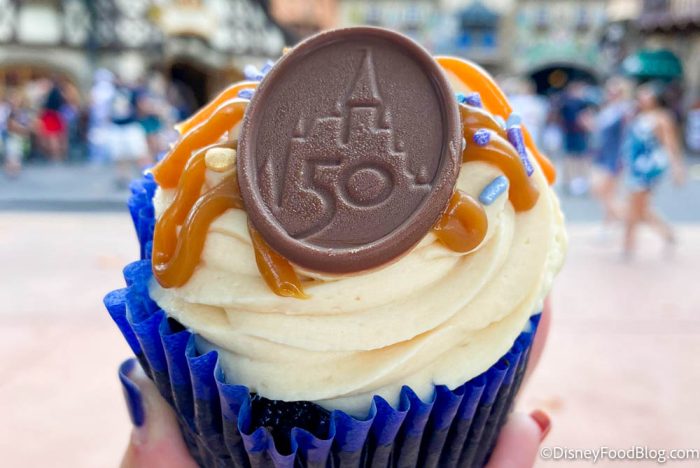 The cake was very sweet, and tasted more like a rich, chocolate brownie than a chocolate cake, which was really nice! It was dense and thick in the best way possible. 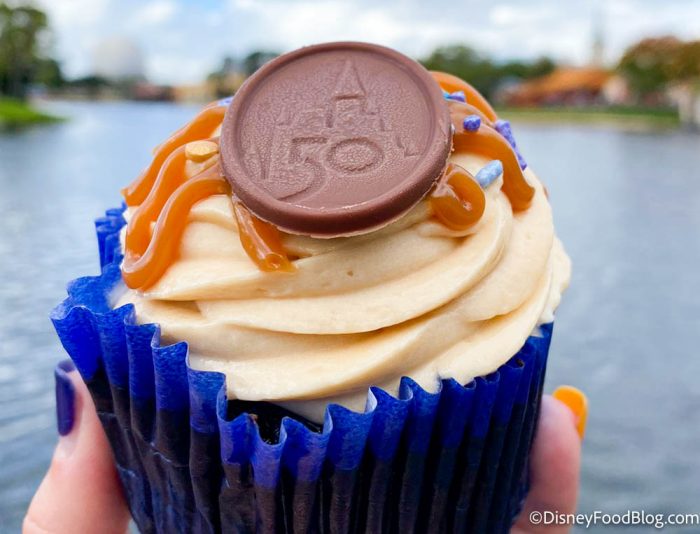 The salted caramel buttercream contrasted wonderfully with the dense cake, since it was fluffy and light. The frosting was also served cold, which was very nice since it was pretty warm in Florida today (shocking, we know). 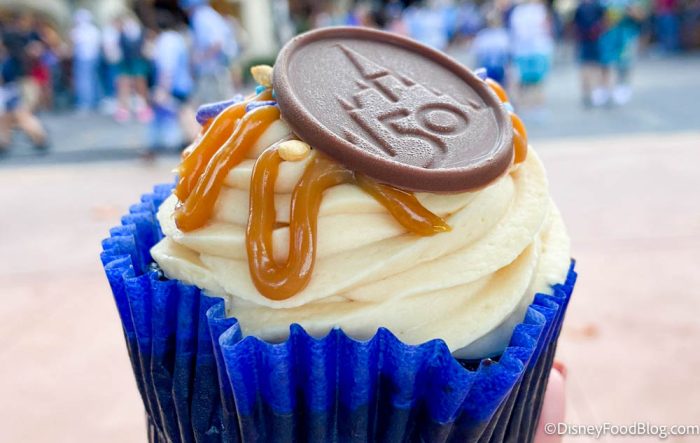 The caramel wasn’t too overpowering, even with that drizzle on top. But you could still taste it, and we loved the hint of sweetness it brought to the snack overall. 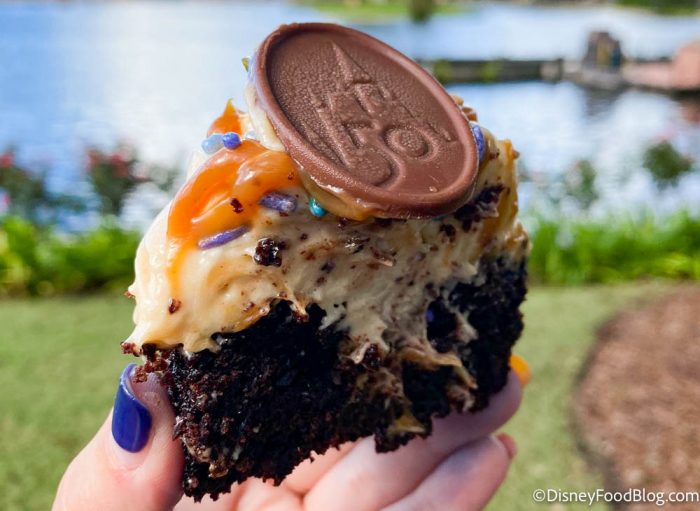 Our only complaint with this cupcake is that the wrapper dyed our fingers blue. Since a good portion of the other 50th Anniversary treats also dyed us blue (usually because the treat itself was blue, not just the wrapper), we think we can forgive this one. 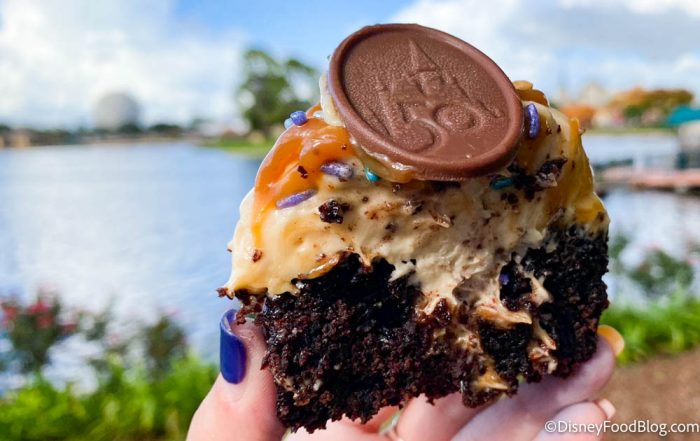 This remains one of our all-time favorite treats in Disney World, and the extra 50th pizzazz only makes it better. If you’re a chocolate lover who enjoys caramel, we think this is something you’ll really enjoy. If, on the other hand, you’re a pure vanilla cupcake fan, then you might want to skip this one.

Head over to Karamell-Küche if you want to give it a try! 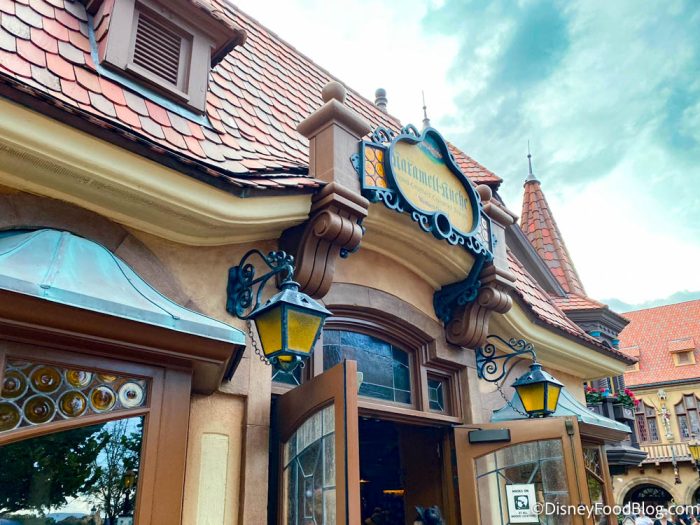 Need a Savory Snack? Click Here to Read About the PIZZA CONE(!!) We Found Today in Disney World

What’s been your favorite 50th Anniversary treat? Let us know in the comments!