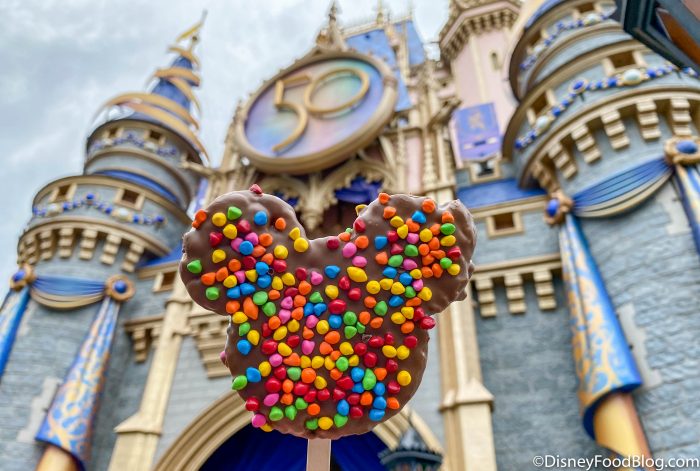 For the first match-up, we put the tropical Fifi, Gigi, Mimi from Aloha Isle Refreshments against the chocolate-y Mickey Mouse Dome Cake from Gaston’s Tavern. These are two VERY different Magic Kingdom treats, so which flavor will win out: tropical or chocolate? The answer is chocolate — by a LOT. The dome cake got 69% of the votes, compared to Fifi, Gigi, Mimi’s 31%. 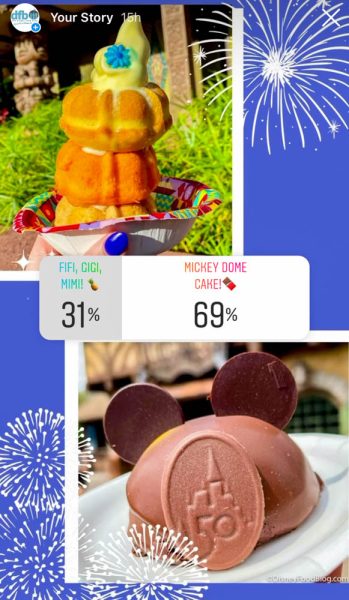 Our next match-up is between a Disney World classic — popcorn! Did you choose the caramel and Twix goodness of Jumbo’s Surprise in Magic Kingdom or the fruity flavors of Rainbow Popcorn from Disney’s Animal Kingdom? Chocolate won out again here, with Jumbo’s Surprise taking the lead, 66% to 34%. 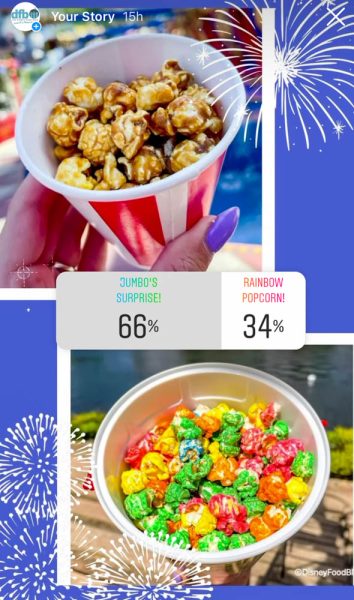 Two of the PRETTIEST 50th Anniversary treats went head-to-head with this next match-up. It’s the 50th Anniversary Petit Cake from Amorette’s Patisserie in Disney Springs against the Glimmer and Shimmer Funnel Cake from Epic Eats in Hollywood Studios. This one was tough, because they’re both just so beautiful! But the petit cake won out in the end, 55% to the funnel cake’s 45%. 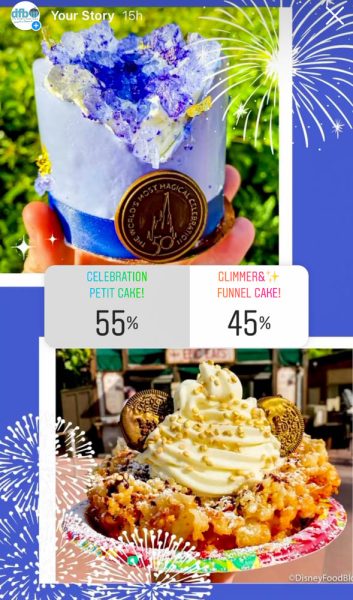 We’re sticking to the classics with the next one, and honestly we don’t know if we could choose between these two treats. It’s like picking a favorite child. Luckily our readers chose for us! It’s the 50th Anniversary Mickey Premium Bar at Drinkwallah against the 50th Celebration Ice Cream Sandwich from Dino-Bite Snacks. Both of them are found in Disney’s Animal Kingdom. Of the classics, the hand-dipped Mickey bar won out! It got 54% of votes to the ice cream sandwich’s 46%. 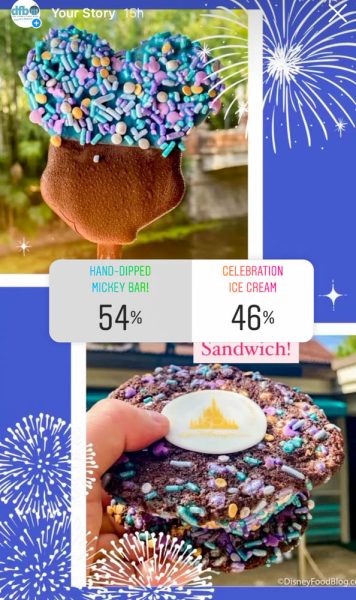 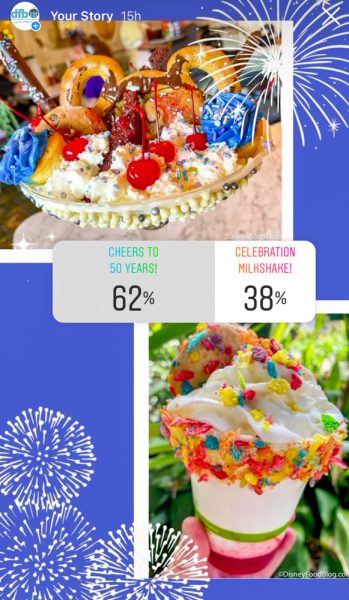 Disney’s Wilderness Lodge was celebrating their own 50th Anniversary, so it’s no wonder they brought one of the prettiest cakes so far. We matched the Petit Stump Cake from Roaring Fork against the glorious return of Cronuts in EPCOT — the EARidescent Croissant Donut from Brew-Wing. The Stump Cake just barely won out over the cronut, which we think is actually a bit of an upset. We don’t disagree, but it’s surprising that the cronut didn’t go further! 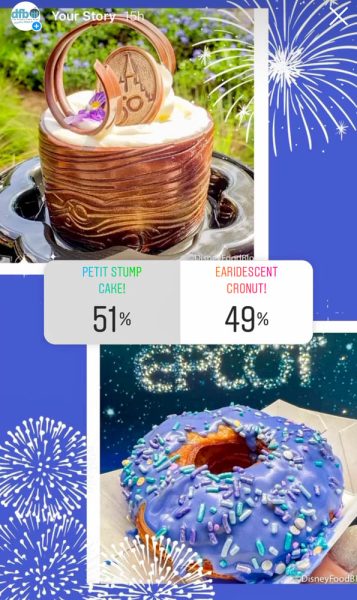 The next match-up was the closest yet. In fact, it came out 50-50 and we had to determine the winner by vote numbers instead of just percentages. The evenly-matched snacks for this match were the Spoon for One More from Columbia Harbour House against the Mission to Mars Burger from Cosmic Ray’s Starlight Cafe. 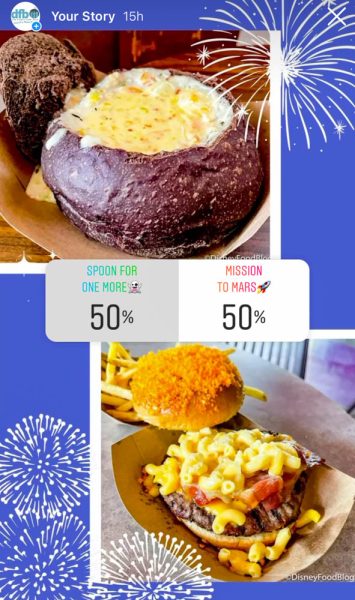 Spoon for One More vs. Mission to Mars Burger

The cheeto dust-covered burger wasn’t quite enough to beat out the Haunted Mansion-themed bread bowl, though! The Spoon for One More beat the burger by 112 votes, with 6,741 votes against 6,629.

We’re sticking with savory foods for the moment, with the 50th Celebration Hot Dog from Casey’s Corner going up against the Pennsylvania Pot Roast from Liberty Tree Tavern. In the end, the funnel cake-topped hot dog beat out the classic pot roast, with 57% of the votes. We have to agree with these results too — that hot dog was not nearly as gross as we thought it would be. 😂 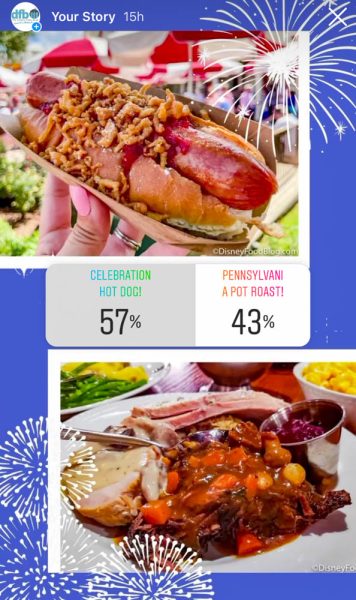 And the savory match-ups continue with the Pecos Bill Widow Maker Sandwich from Golden Oak Outpost (what?) going up against the 50th Celebration Spring Rolls from (where else?) the Spring Roll Wagon! The spring rolls won by a decent window here, with 58% of the votes. It’s very possible that the Pecos Bill sandwich lost because it just confused us too much — since, you know, it’s NOT at Pecos Bill Tall Tale Inn and Cafe. 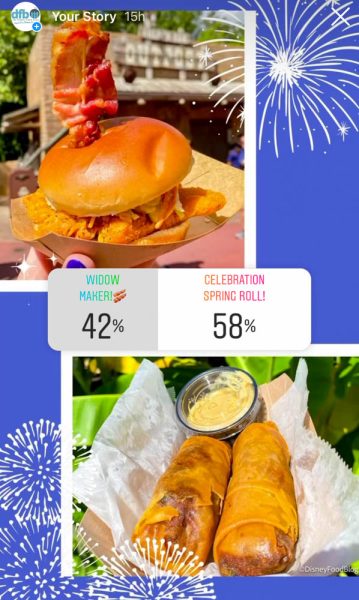 We were ready for something SWEET next, so this match-up is between Chocolate Mousse from The Mara (at Disney’s Animal Kingdom Lodge) and the Wendell’s Bear Claw from Westward Ho Refreshments. This one was no contest at all, with the Chocolate Mousse taking the lead with 68% of the votes. It’s clearly the better-themed of the two! 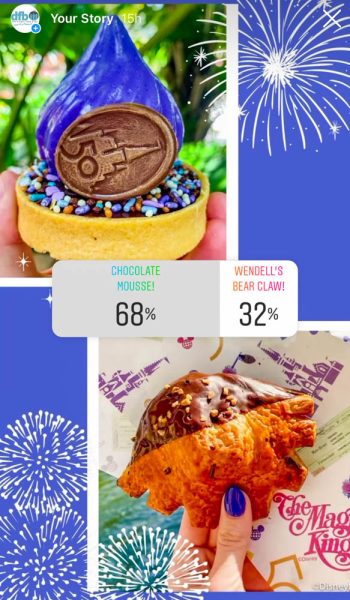 Next up is a DRINKS match-up, with the Sip-a-Bration drinks from Steakhouse 71 going against the Happy Haunts Milkshake from Columbia Harbour House. The sweet milkshake won out over the tart lemonade here, with Happy Haunts taking 66% of the votes! Does it help that the milkshake is topped with a delicious chocolate doughnut? Absolutely it does. 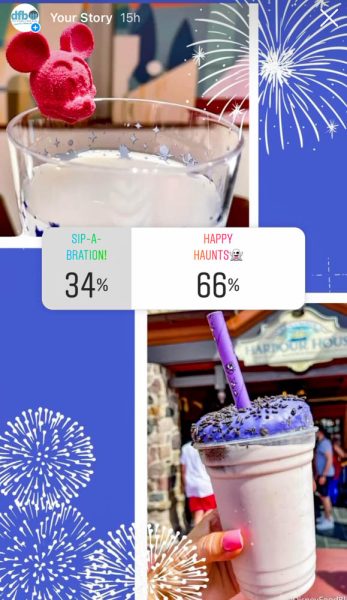 OK, the next pairing is a little controversial, because we pitted two DOLE Whips against each other! It’s the Snow White Cone from Storybook Treats against Sparkling Sunshine from Sunshine Tree Terrace. Although DOLE Whip in a champagne glass looks very fancy, the beautifully themed Snow White Cone just barely took the lead, with 52% of the votes. And how could it not with such a cute little red bow on top? 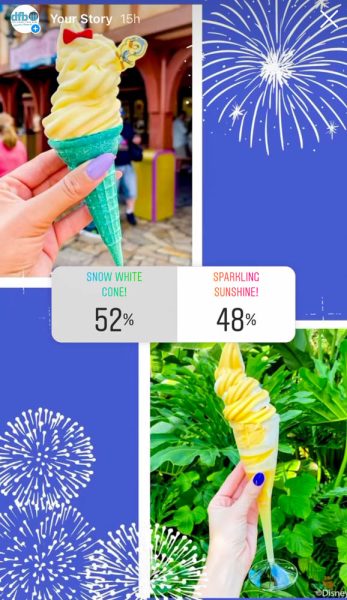 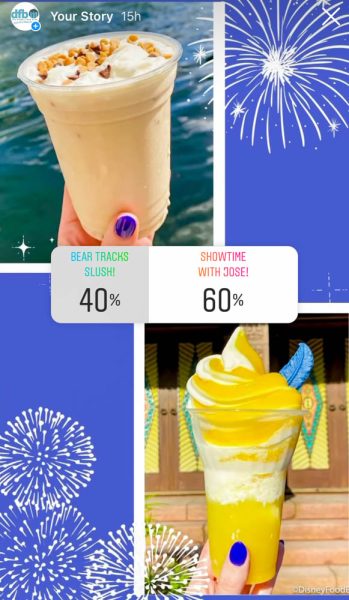 It’s the parks against the hotels now, with the Chocolate Mousse from the ABC Commissary in Hollywood Studios up against the Peanut Butter Banana Pie from Contempo Cafe at Disney’s Contemporary Resort. The peanut butter pie is one of our favorite treats, so we were happy to see it won — but just barely! The pie took 52% of the votes compared to the mousse’s 48%. 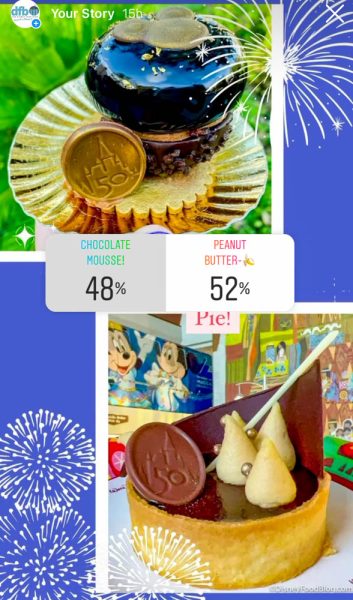 This one is the battle of the mini cakes! The Mini Chocolate Bundt Cake from Sunshine Seasons is against the 50th Celebration Mickey Mouse Dome from Creature Comforts. In this case, the dome was better than the bundt, with the Mickey Dome getting 52% of the votes! We loved that little bundt cake, but the dome cake had Mickey ears on it…so really we can’t argue with the results. 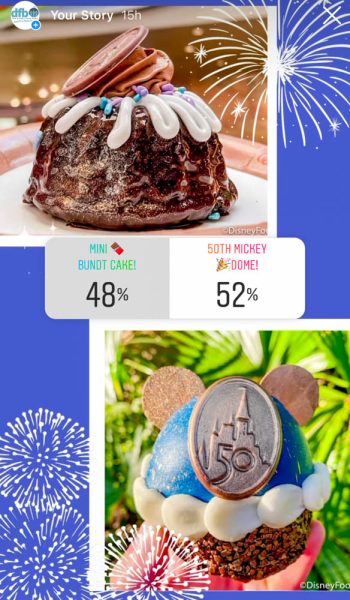 The final match-up for this round was the Glimmer and Shimmer Blondie from Fairfax Fare in Hollywood Studios against the Dumbo Churros from the Storybook Circus Pretzel and Churro Cart. Although it was pretty close, that shimmery blondie won out with 56% of the votes! We completely agree here — the blondie was DELICIOUS, and it was one of the cheapest desserts for the 50th. 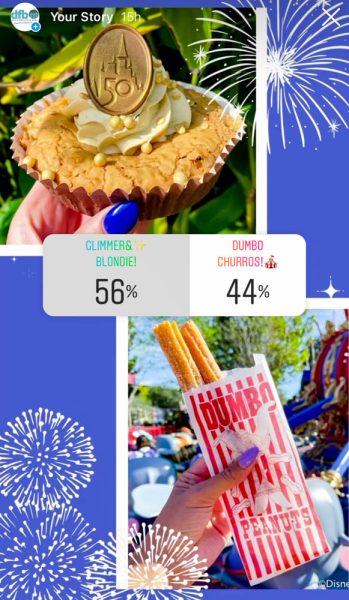 That’s all for the second round of the Official DFB 50th Anniversary Treats and Eats Challenge. Follow DFB on Instagram to vote on your favorite 50th Anniversary eats and treats, and keep an eye on our blog for more results!

See our ranking for ALL the 50th anniversary treats in Magic Kingdom HERE!

Did any of the results in this round surprise you? Let us know in the comments!

« What’s New in Hollywood Studios: Droid Depot Merch and an Eternals MagicBand
How Busy Will Disney World Be The First Holiday Weekend of Its 50th Anniversary Celebration? »