Welcome to the 2022 EPCOT Festival of the Arts! 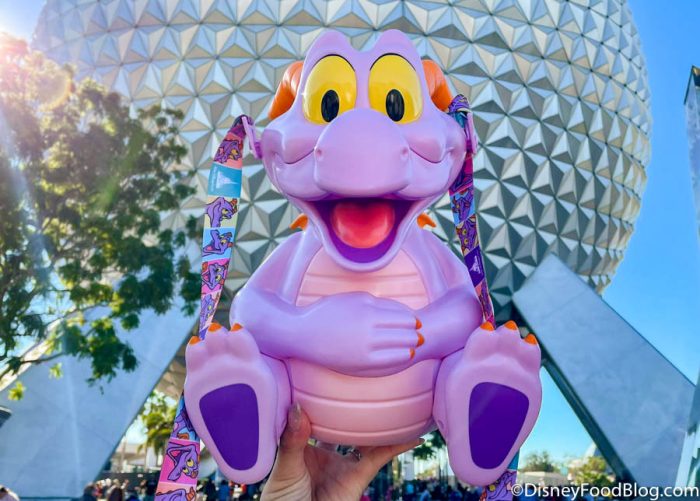 We’ve been bringing you LIVE updates all day as we enjoy the first EPCOT festival of the new year. There are plenty of new items at the food booths and free activities to do during the festival. We’ve already tried some great food at booths like The Craftsman’s Courtyard and The Painted Panda, and we’re not done yet! It’s time to try out the food and drinks at Tangierine Cafe: Flavors of the Medina!

Morocco’s Mosaic Canteen has switched to Tangierine Cafe: Flavors of the Medina, which has been a part of the last few festivals. It’s located inside the original Tangierine Cafe quick service spot that was there before the 2020 closures. 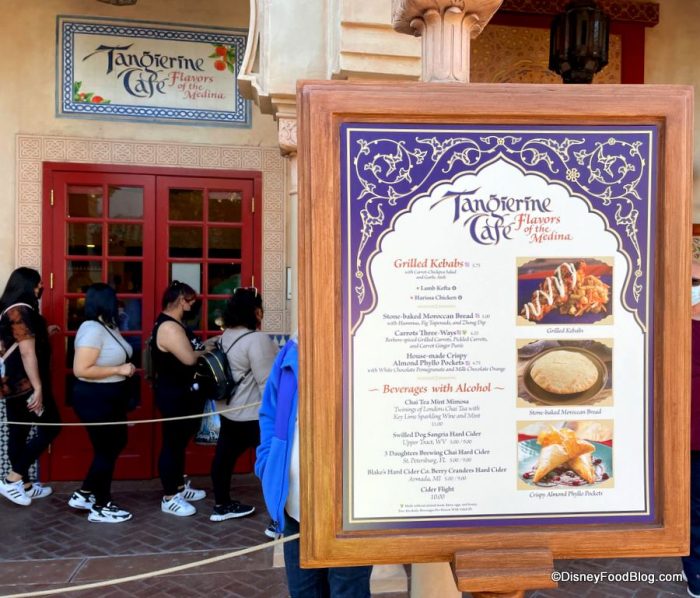 There are some new things on the menu this year as well as the returning Chai Tea Mint Mimosa. There are also some items on the menu that were not listed when Disney released the menus — the menu now includes the Grilled Kebabs (Lamb Kefta OR Harissa Chicken) with Carrot-Chickpea Salad and Garlic Aïoli for $5.75 and the Stone-baked Moroccan Bread with Hummus, Fig Tapenade, and Zhoug Dip for $5. 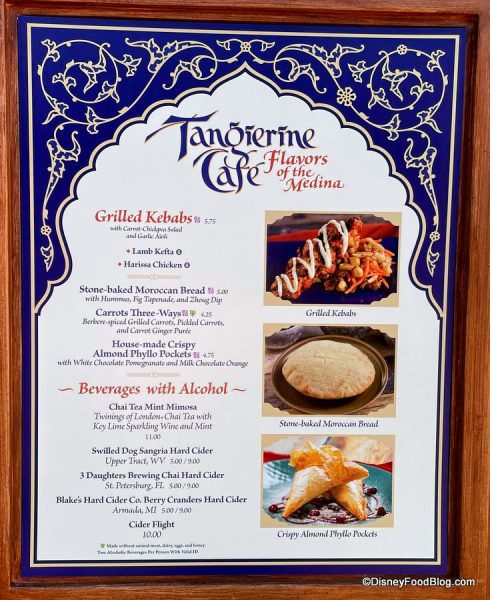 There are a few new items on the menu here, so let’s get started! 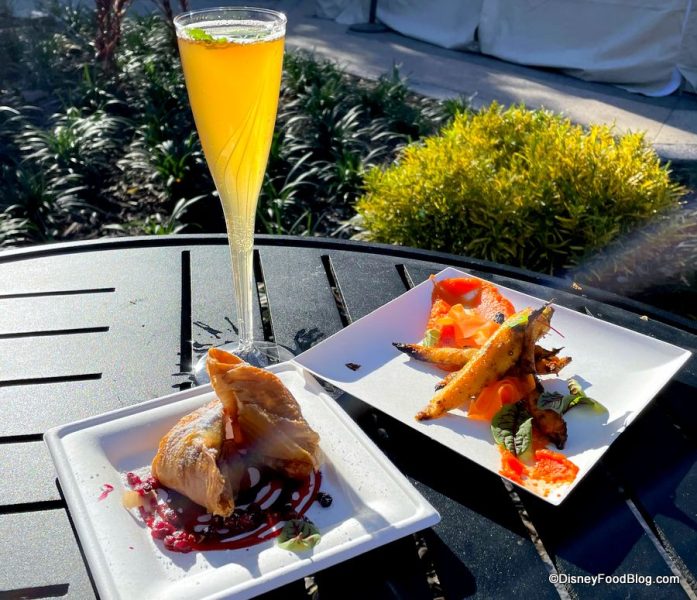 We’re ready to dig in!

First up on the list is the new Carrots Three Ways. This is a plant-based dish with berbere-spiced grilled carrots, pickled carrots, and carrot ginger purée for $4.25. This is a really interesting dish! The grilled carrots are really flavorful but were also pretty spicy! The berbere spices were definitely prominent, and we got a lot of spice from the chiles. 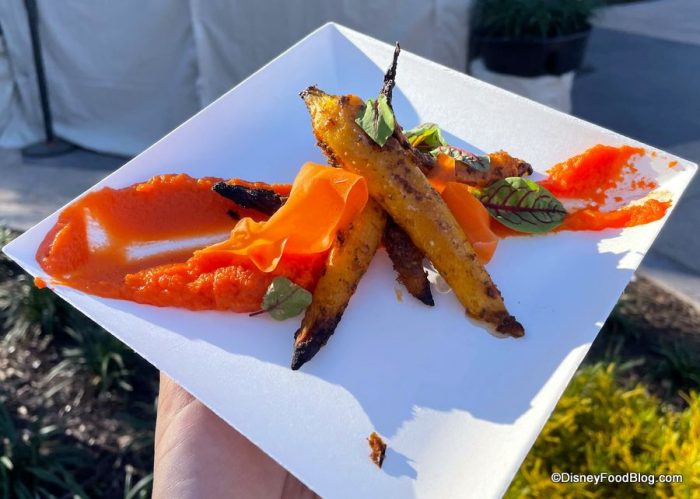 These carrots were cooked well, but they were a bit hard to eat because of how spicy they are. But, the spice was mellowed out by the buttery carrot purée underneath. The carrot ginger purée was very tasty and was honestly the star of this dish! It’s not spicy at all and it’s very smooth. It was kind of like grown-up baby food, but in the best way possible!

The pickled carrots were sour and tangy with a strong vinegar flavor. They were slightly spicy and really crunchy! These were tangy in a good way and the crunch was a great contrast to the purée. Overall, this is a tasty vegetarian option! 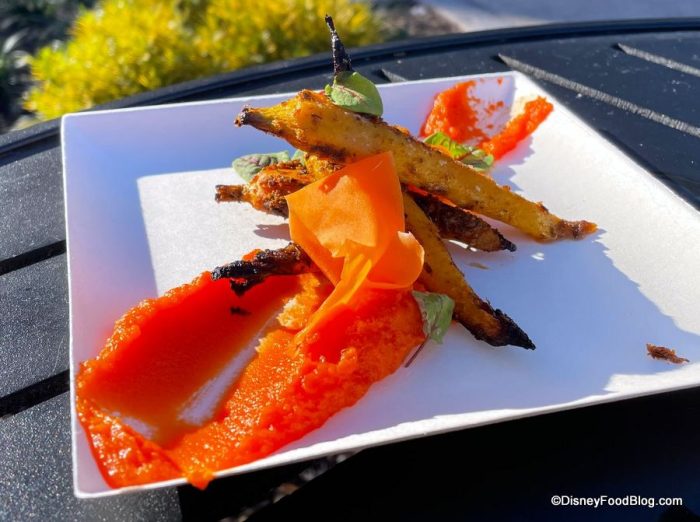 The second food item at this location is the House-made Crispy Almond Phyllo Pockets with white chocolate pomegranate and milk chocolate orange for $4.75. 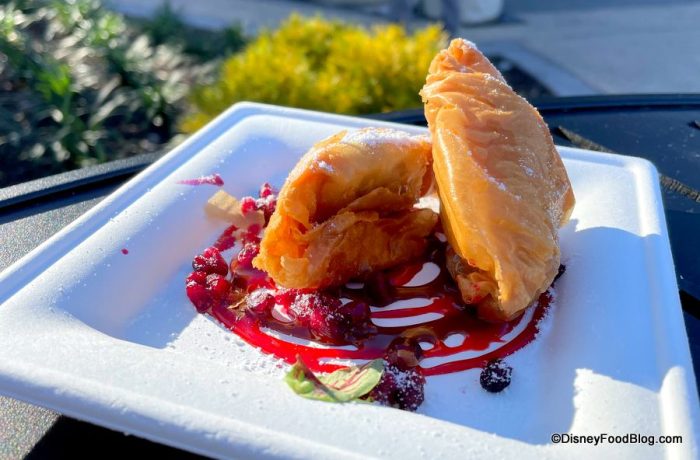 Look at that color from the pomegranate!

There was a lot of cinnamon in this pastry, but not a whole lot of flavor. There could be more filling inside, but, it wasn’t very heavy, so it’s a nice light dessert! 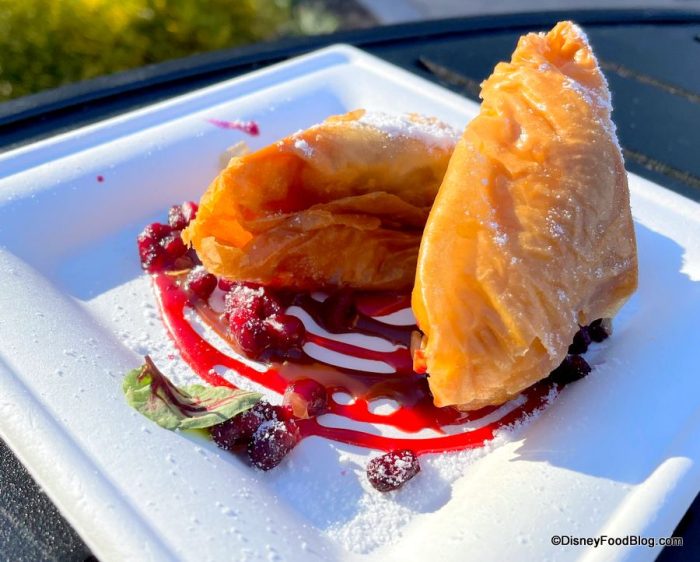 The pomegranate seeds and sauce added a great freshness and elevated the pastry, keeping it from being just a one-note flavor. This definitely saved the dessert for us! 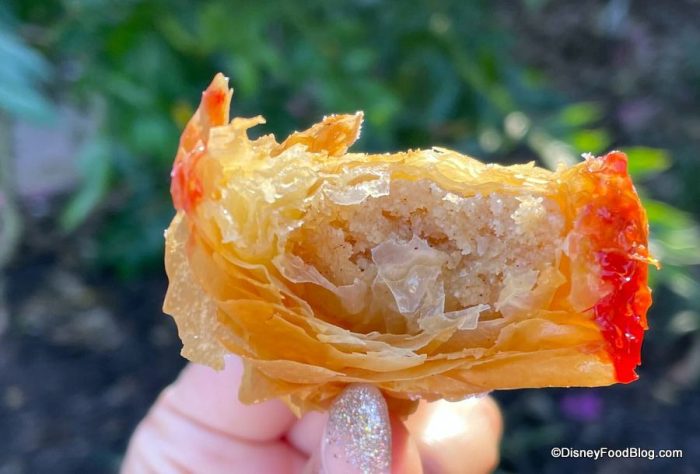 Now, for the drinks!

We tried the Chai Tea Mint Mimosa that’s made with Twinings of London Chai Tea with Key lime sparkling wine and mint for $11.This was good, but it did have something slightly off about it flavor-wise. It’s not what you would expect from a typical mimosa. 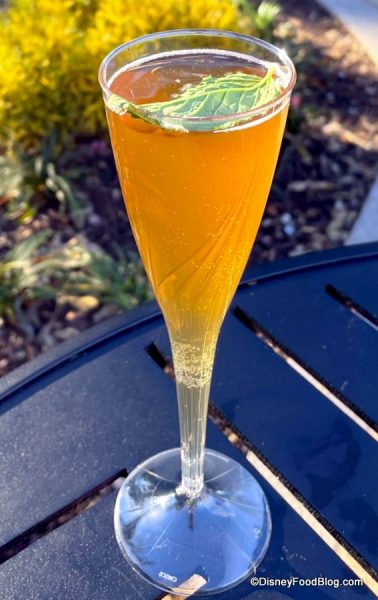 We thought the chai tea would add warming spices to this drink, but we didn’t pick up any of those flavors in the mimosa. We’re not convinced that the flavors of chai tea, key lime, and mint go well together, but it’s for sure a unique combination! If you’re a fan of those flavors, it’s worth giving the drink a try — it might surprise you! 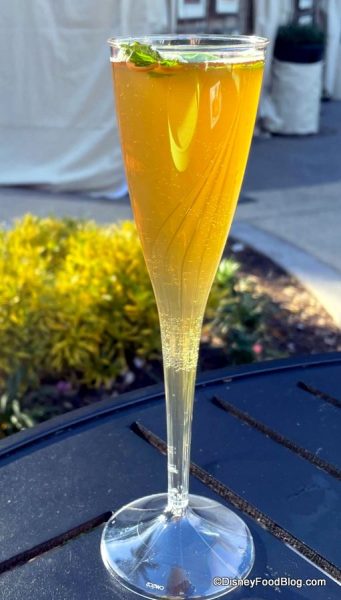 Not a flavor combo we would’ve thought of! 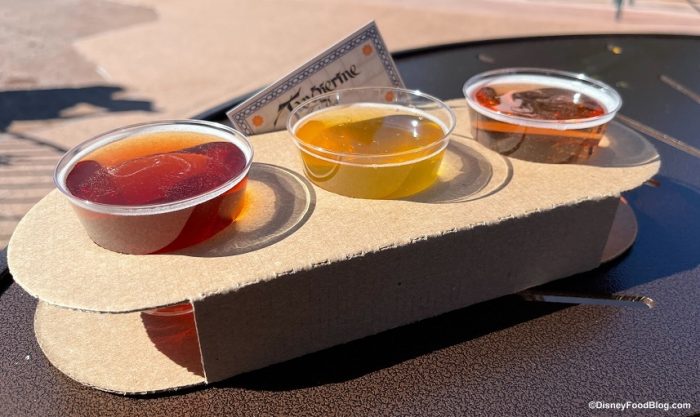 First up, Blake’s Hard Cider Co. Berry Cranders Hard Cider was an okay drink for us. The berry and apple flavors weren’t that pronounced, it was similar to flavored seltzer or berry sparkling water because it had just a hint of fruity flavor. Overall, this drink is alright but it’s nothing to sneeze at! 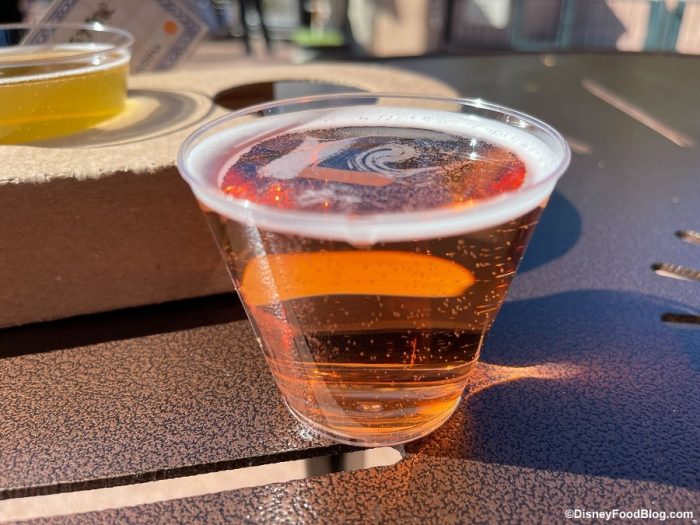 The 3 Daughters Brewing Chai Hard Cider was a surprise for us! This had just the right amount of chai and apple flavor and it wasn’t overly sweet or too boozy. This ended up being our favorite drink from the flight! 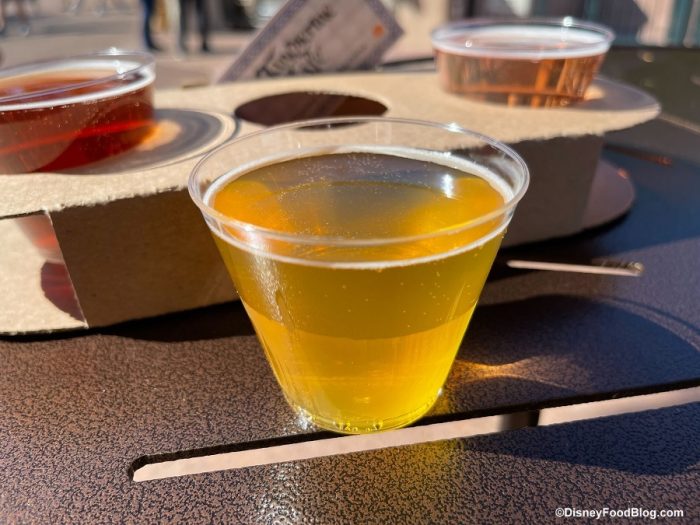 Finally, the Swilled Dog Sangria Hard Cider was good, but a bit too sweet for our taste! There’s definitely a strong berry, grape, and apple flavor, but there’s nothing to cut the sweetness. 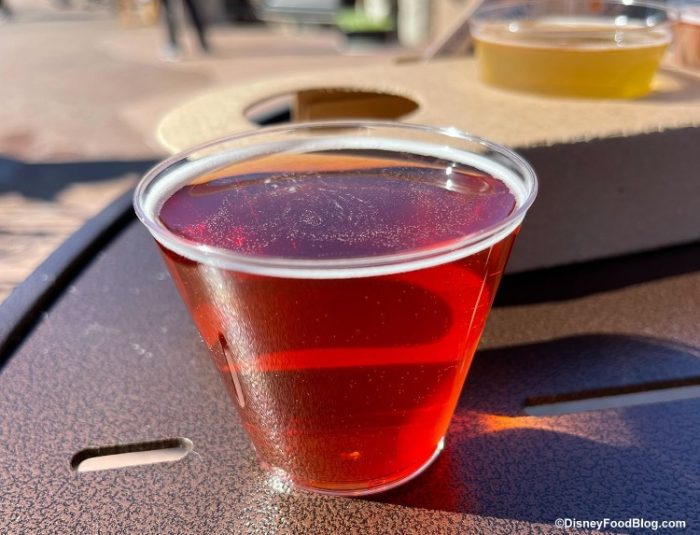 Overall, this booth has some fresh and flavorful items! If you want some bread and dips, or a great plant-based option, this is a good spot. It also has some more unique drink offerings that you probably won’t find in your local grocery store, so they’re worth checking out! We’ll be in EPCOT giving you Festival of the Arts updates all day long, so stay tuned to DFB for more!

Check out ALL of the FULL MENUS for the 2022 EPCOT International Festival of the Arts!

What are you looking forward to at this year’s Festival of the Arts? Let us know in the comments!

« REVIEW: We Think Disney World Guests Are Going to be Pretty Divided on This New Treat
The Hidden Details Worth Searching For at EPCOT’s Festival of the Arts! »