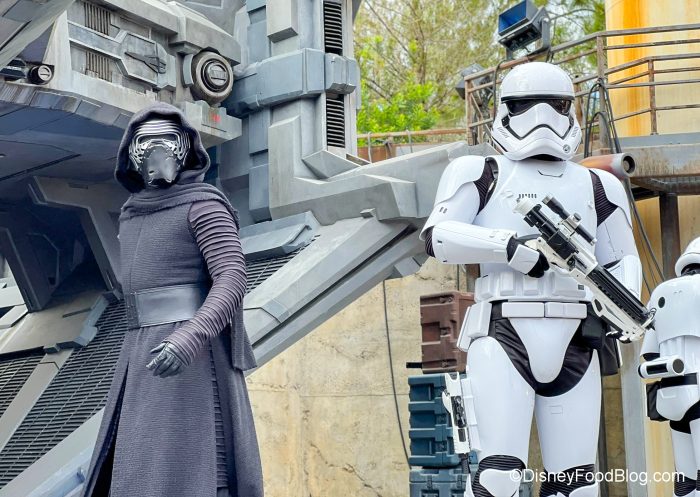 Celebrate May the 4th at Disney World!

No, we’re not talking about Easter or Earth Day. We’re talking about May the 4th (aka Star Wars Day), and chances are, if you’re a huge Star Wars fan, you celebrate BIG every year. But what if you find yourself at Disney World on May the 4th? Well, we’ve put together a list of unique things you can do to celebrate!

By the way, we might’ve suggested booking a stay on the Star Wars: Galactic Starcruiser, but at the moment, May the 4th is all booked up. But we can’t imagine a better way of celebrating Star Wars Day!

Ride Star Tours as Many Times as Possible 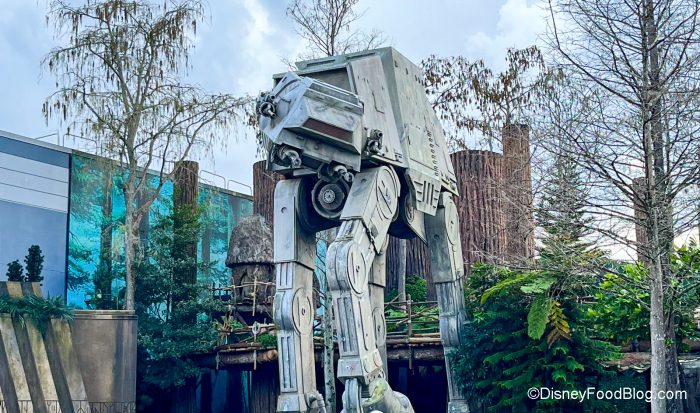 So how many scenarios are there? Well, there are a total of 54 ride sequences. Are you up for the challenge of riding it until you see all 54? (Tip: you’ll probably want to keep notes on which scenarios you get as you ride).

Make a Lightsaber and Build a Droid

Want to celebrate big? Head on over to Star Wars: Galaxy’s Edge and make your own custom lightsaber at Savi’s Workshop! Note that this is not just a thing you do — it’s a whole experience. You’ll use Saber pieces, kyber crystals, and tales of the Force and the Jedi as told by the Gatherers to create a lightsaber that’s JUST FOR YOU.

Yes, it’s a little pricey at $219.99 per lightsaber, but you’ll also have something that’s uniquely you and an experience you’ll never forget. 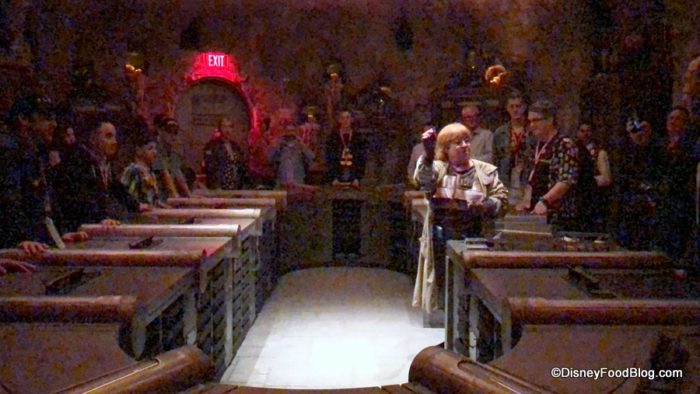 You can also build your very own custom Droid at Droid Depot! You have a choice of the droid’s body style to which you can attach various parts to make it your own. Even better? Once you’ve built your droid, you get a remote control to operate it. You can also use your new Droid to interact with other droids AND other things in Star Wars: Galaxy’s Edge. 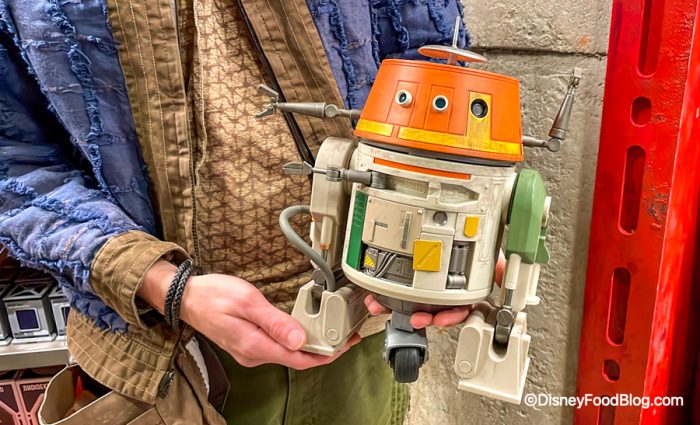 You can build your own droid!

This experience costs $99.99, but you can also choose to upgrade your droid for an additional cost by adding a personality chip, accessories, and more.

Here’s How to Bring ‘Star Wars’ to Your Front Door — Literally!

Get ALL the Star Wars MagicShots

There are a ton of PhotoPass Magic Shots available in Star Wars: Galaxy’s Edge, so be sure to look for Disney photographers and ask to get them all. You can get a shot with Baby Yoda, have a Porg sit on your arm, or get a Super Zoom shot from the Millennium Falcon. 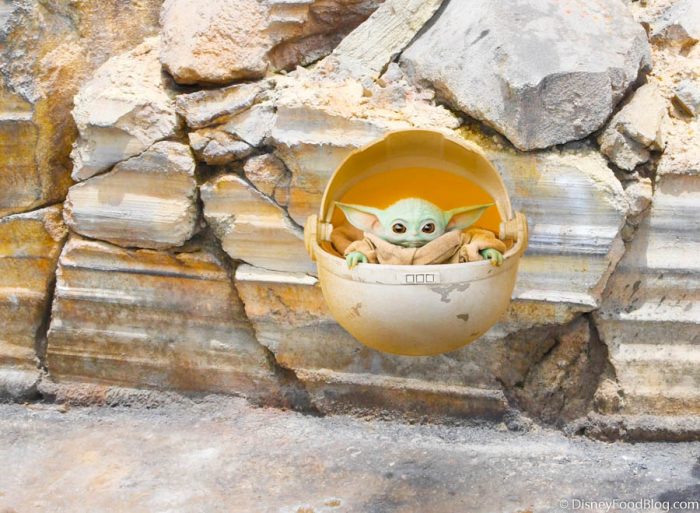 Get your photo with Baby Yoda!

You can even pose with a Kowakian monkey-lizard and get a Tiny World Magic Shot. Most of these shots are available through a PhotoPass photographer, so be sure to seek out every photographer in Star Wars: Galaxy’s Edge! Tip: you can find PhotoPass locations on the My Disney Experience app! Just search for “Disney PhotoPass Experience” and then click on “Map” to see ALL the locations where you’ll find a photographer.

Check Out This New Disney Dress Inspired by a Popular ‘Star Wars’ Character!

Although you can’t wear a full costume to Disney World, you can participate in something called DisneyBounding. This is basically creating outfits from your everyday clothes to represent a Disney character. It’s a lot of fun, and it gives you a chance to be creative with your fashion choices. 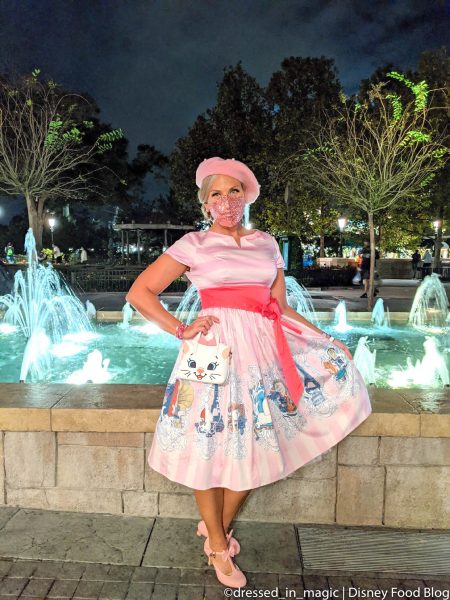 If you’re headed to Disney World on May the 4th, you can put together an outfit based on your favorite Star Wars character — more than likely, other fans and Cast Members will recognize exactly who it is!

Is the Star Wars Hotel Worth Missing 2+ Disney World Park Days?! Find Out!

Take Photos With EVERY Star Wars Thing at EVERY Park

There are Star Wars references ALL over Disney World — in nearly every park, but can you find them all? Sure, you know about everything you might find in Star Wars: Galaxy’s Edge, but don’t forget to snap a photo of the 50th Anniversary statues of R2-D2 and BB-8 at Hollywood Studios. 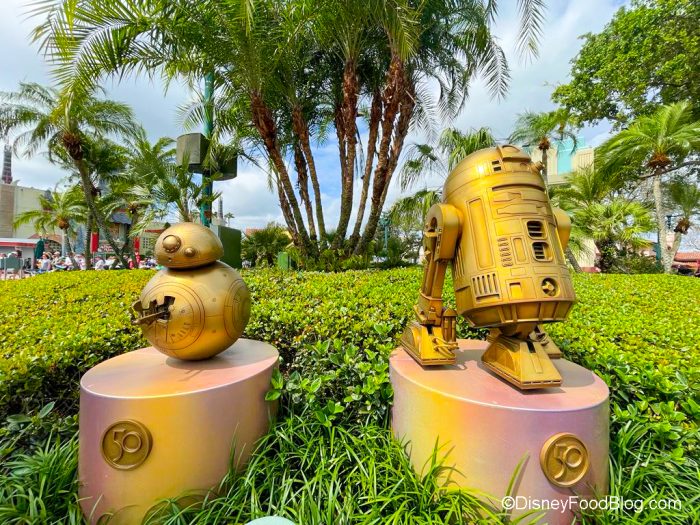 You also might be surprised to see a Star Wars reference at EPCOT — if you visit Space 220, you’ll see two astronauts floating around in space with lightsabers! So keep an eye out to find out where else you can find Star Wars references at Disney World!

Ride Rise of the Resistance and Millennium Falcon: Smuggler’s Run

Okay, so these are no-brainers, but you can’t celebrate May the 4th at Disney World without riding Rise of the Resistance (suggestion: skip the long lines by purchasing Lighting Lane access through Disney Genie). It’s the most technologically-advanced ride that Disney has done TO DATE, and is not to be missed. 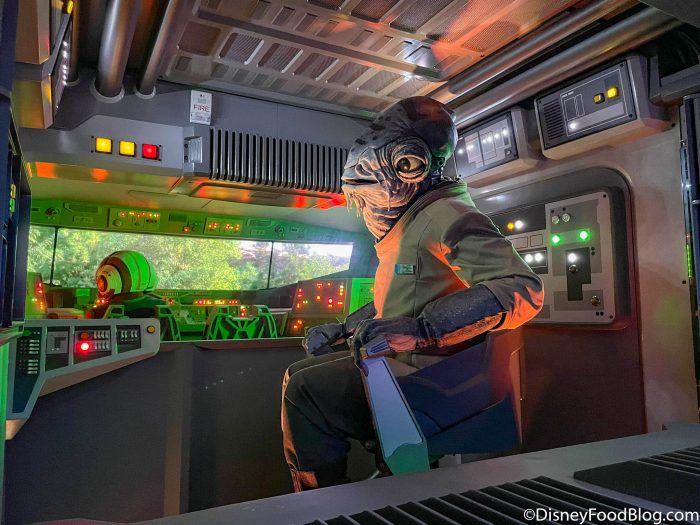 We’ve got a bad feeling about this

Likewise, you’ll want to purchase Disney Genie+ to hop on Millennium Falcon: Smuggler’s Run faster. If you get a chance, ride it as many times as you can to try to get the highest — AND LOWEST — score!

Visit Oga’s Cantina and Order EVERYTHING

Okay, so this one might require you to bring a group of friends, and you’ll need to nab a reservation at Oga’s Cantina to make it happen (and that isn’t always an easy thing to do). However, if you do manage to snag a reservation, you could try EVERY single drink at Oga’s Cantina because they’re all unique to the bar — you won’t find those drinks anywhere else at Disney World. 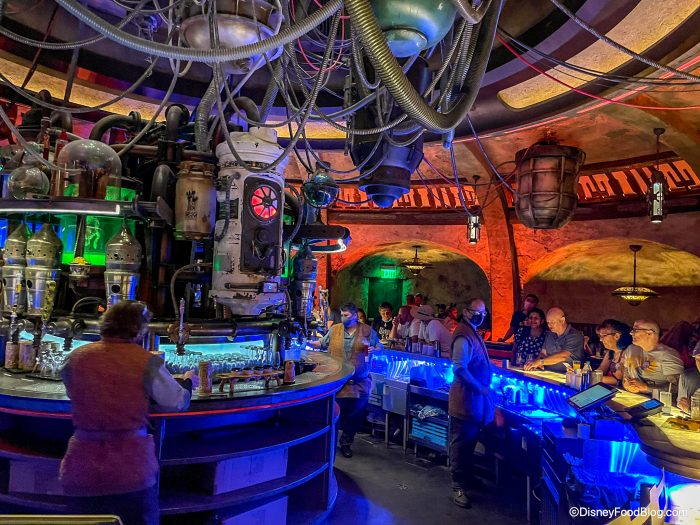 Plus Oga’s Cantina is just SO cool — you really feel like you’ve stepped into a space bar where Han Solo could show up at any given moment. If you don’t happen to drink alcohol, though, don’t worry — Oga’s also has an exclusive selection of non-alcoholic drinks you can try!

Here’s Our Most Recent Review of Oga’s!

Yes, there are several quick-service spots to choose from in Star Wars: Galaxy’s Edge, but Ronto Roasters should ALWAYS make your list. Both the breakfast and lunch/dinner wraps are DELICIOUS, and we won’t lie — they’re probably some of our favorite foods at Disney World! 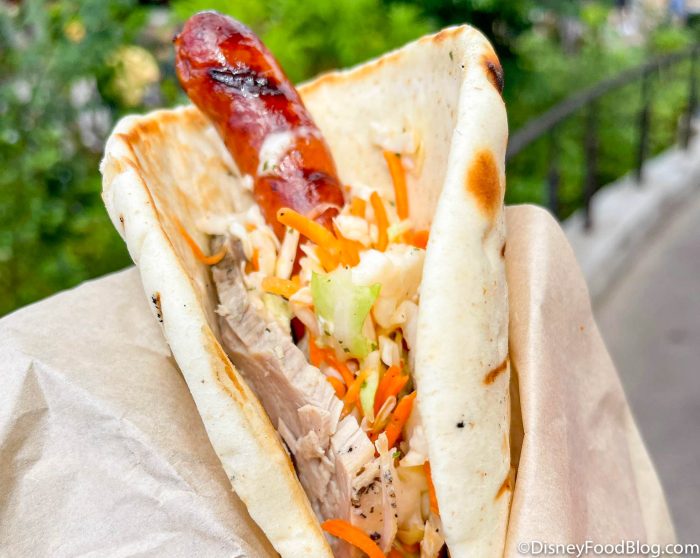 While you’re at it, go grab some unique popcorn flavors from Kat Saka’s Kettle — this is NOT your typical Disney World popcorn! You’ll definitely want to try the sweet, spicy, and savory Outpost Mix! Also, if you don’t know how to get the secret popcorn mix, you’ll want to read this.

Learn More About The SECRET Popcorn Mix at Kat Saka’s

Get a Thermal Detonator Coke

If you want a unique souvenir from Star Wars: Galaxy’s Edge, be sure to grab a Thermal Detonator Coke — you’re not going to find anything like it anywhere else. These are tiny round bottles of soda in unique packaging that makes them look like a thermal detonator with Aurebesh writing on them! 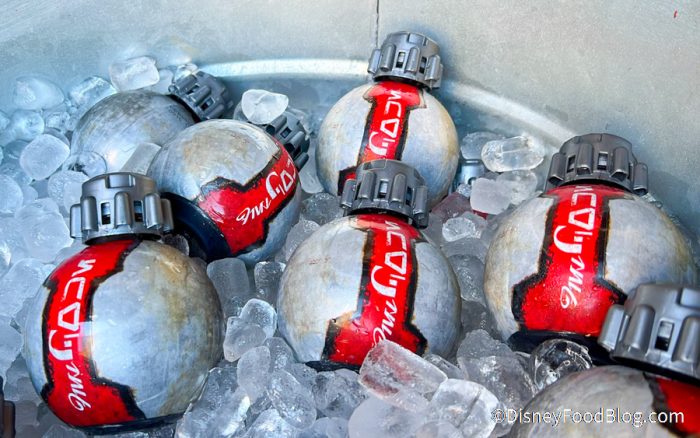 If you prefer Sprite, you can find Thermal Detonator Sprite, too! Many of the vendors in Star Wars: Galaxy’s Edge have these unique sodas, so start a collection!

Is The Star Wars Hotel JUST For Star Wars Fans? Find Out Here!

Did you know you could get unique plushes of creatures from the Star Wars universe? So why not adopt a couple of creatures for yourself? You can get Loth Cats, Kowakian Monkey-Lizards, Porgs, Tauntauns, and more! 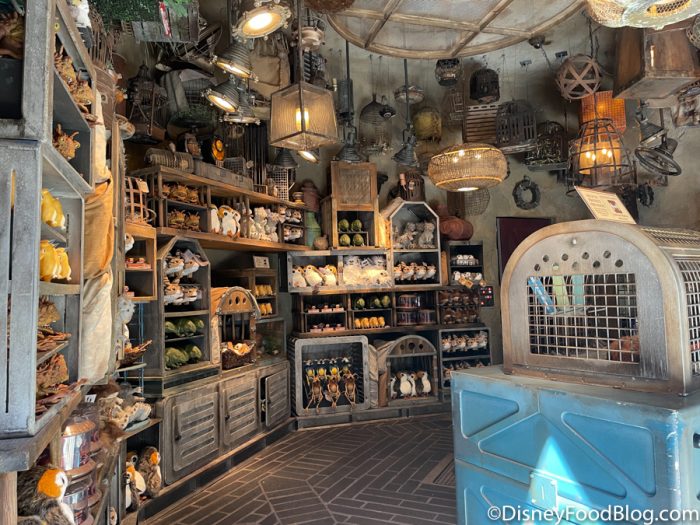 You’ll find the creatures at the Creature Stall in the Star Wars: Galaxy’s Edge Marketplace!

Yes, BABY YODA Goldfish Exist — Here’s Where To Find Them

Treat Yourself to Some Skywalker Wine or Olive Oil 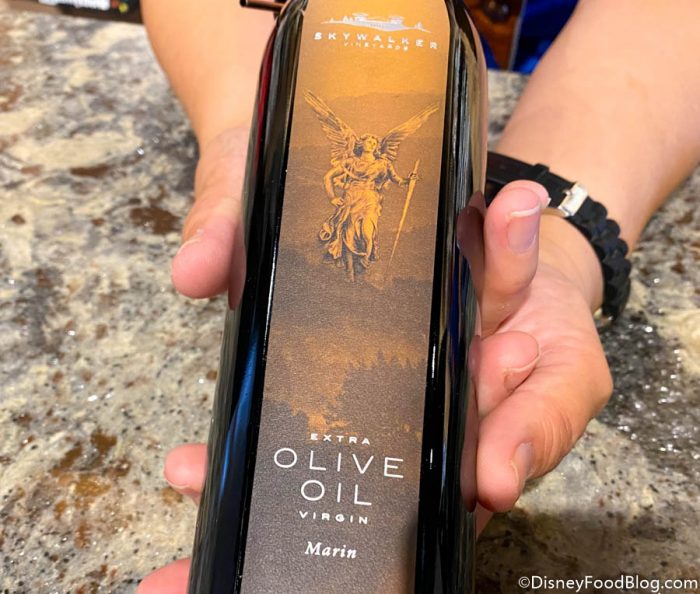 Talk about a fun and unique Star Wars souvenir!

Read This Before You Shell Out $5,000 For Disney’s Star Wars Hotel

Is there an expensive Star Wars souvenir you’ve been wanting to buy, but just haven’t yet? Treat yourself and dig out that wallet. Whether it’s a character lightsaber or jewelry or the LEGO Millennium Falcon set or a Loungefly bag, buy that thing you’ve always wanted. 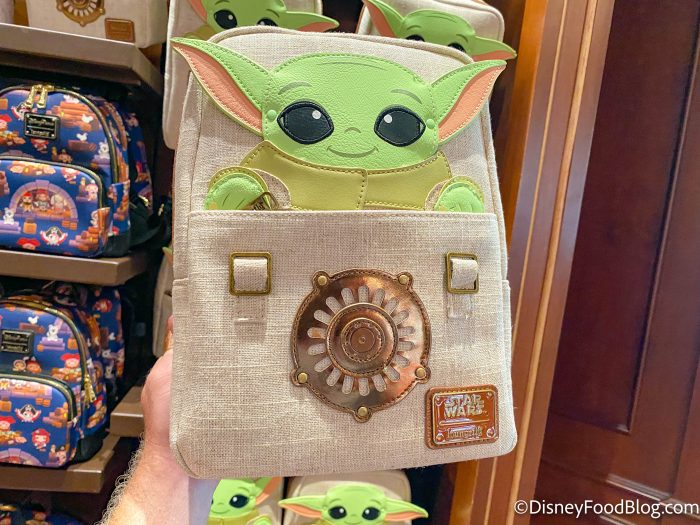 When is it a better time to indulge your Star Wars fandom wish list than on May the 4th?

Speaking of shopping, you’ll be able to shop until you drop for Star Wars merchandise at Disney Springs — there are TWO shops dedicated exclusively to Star Wars. First, drop into the Star Wars Galactic Outpost, which is located on the West Side of Disney Springs. You’ll find a lot of unique collectibles here, as well as other souvenirs. 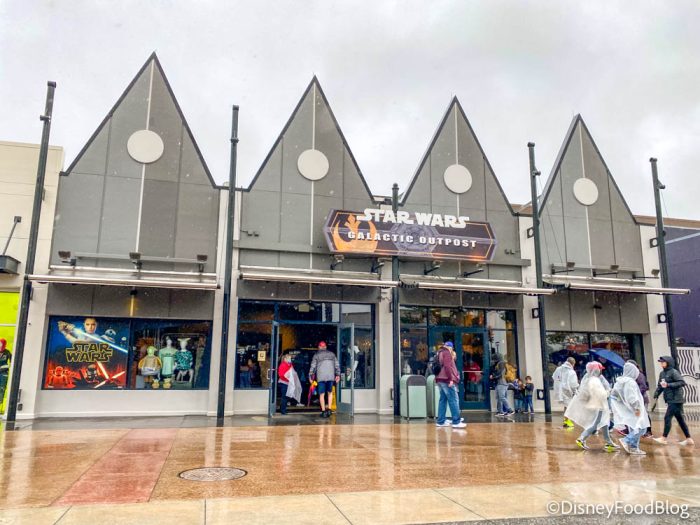 Then head on over to Star Wars Trading Post, which is located in the Disney Springs Marketplace. Also, don’t forget you can find even MORE Star Wars stuff at World of Disney.

Check Out ALL the Easter Eggs in Star Wars: Galaxy’s Edge

If you’re a hardcore Star Wars fan, you might be able to spot a TON of Star Wars Easter eggs at Galaxy’s Edge. For example, don’t miss the Dianoga, who will pop out of a water tank behind a water fountain. You’ll also want to see the taxidermied Wampa in Dok Ondar’s Den of Antiquities. 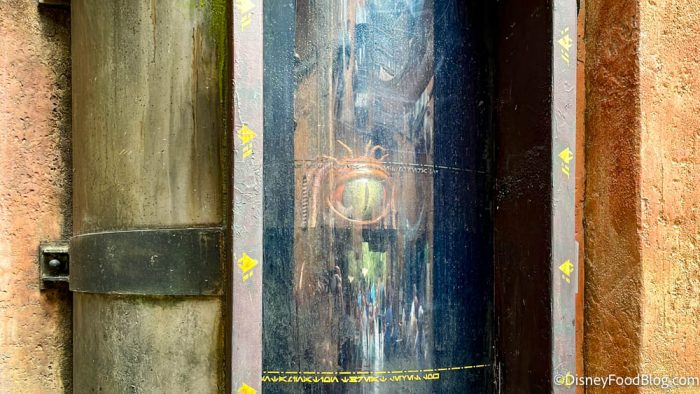 There are a TON of Easter Eggs to find, so we won’t spoil them all, but we’ll also tell you to look ALL around Batuu — including down — because you never know what you’re going to see. 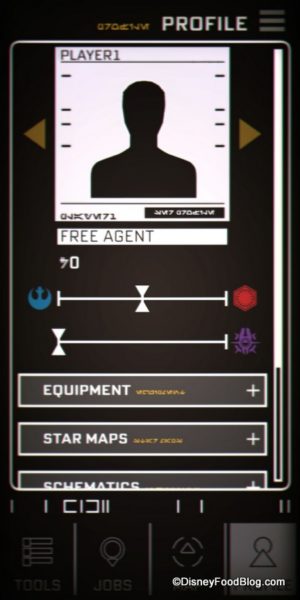 You’ll soon be able to unlock all kinds of secrets because you’ll use the datapad to translate the Aurebesh you see all over Batuu, as well as take on jobs, hack into tech (including droids!), scan QR codes to find hidden objects, and more!

Here’s The ‘Star Wars’ Gift You Can Wear EVERY Day!

So there you have it — unique ways you can celebrate May the 4th at Disney World. As always, May the 4th Be With You!

Stay tuned to DFB because we’ll be keeping you updated on everything Disney World has planned for Star Wars Day!

Will you be at Disney World on May the 4th? Let us know in the comments!