Disneyland Hotel opened back on July 2nd, and with it came a few of its restaurants! One of them, in particular, was at the TOP of our “must revisit” list for good reason — it’s basically one of the coolest bars on earth. We’re heading over to Trader Sam’s Enchanted Tiki Bar to try out the food and get you a full review! 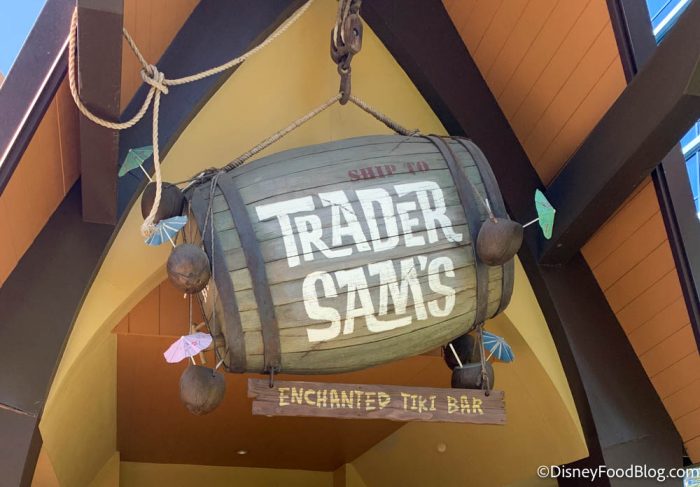 We’ve loved this spot in the past for its relaxed tropical vibes and super fun atmosphere, so we were excited to see if it’s as good as we remember!  END_OF_DOCUMENT_TOKEN_TO_BE_REPLACED

This weekend we’ll be celebrating 90 years with MICKEY MOUSE! Who’s the Leader of the Club?

Suffice it to say, our favorite Mouse has had a HUGE effect on pop culture over the years, so what better place to mark the decades with Mickey than at Pop Century Resort, where we’re checking out What’s New! Pop Century will be celebrating the Main Mouse with Mickey’s A-Mouse-ing Birthday Bash on Mickey’s birthday, November 18th! Special activities will include Character Greetings, Place the Party Hat on the Mouse, and a Hot Diggity Dance Party. END_OF_DOCUMENT_TOKEN_TO_BE_REPLACED

2016 is gearing up to be a positively HUGE year for Disney’s Animal Kingdom.

The headlining news revolves around the highly anticipated Rivers of Light spectacular, which — along with evening journeys at Kilimajaro Safaris also beginning sometime in the spring — will transform Animal Kingdom into a park with nighttime activities for the first time.

Naturally, this transition into a full day park will affect dining options, since expanded operating hours will result in a larger need for more dining opportunities. In fact, it’s already been announced that Animal Kingdom will also be getting its first Signature Restaurant in 2016, Tiffins.

But it’s not just huge shows and signature eateries coming to Animal Kingdom. Some additions are more subtle, but certainly still worth noting. For instance… SURPRISE!! As of this past Saturday, there is a brand new bar and snack stand you can now enjoy in Animal Kingdom’s Asia. Welcome to Thirsty River Bar and Trek Snacks! Let’s have a look! END_OF_DOCUMENT_TOKEN_TO_BE_REPLACED Thankfully after strolling around in the hot Florida sun, those tables alongside the marina provide some shade! And the live music on the waterfront invites guests to unwind. Frequently, END_OF_DOCUMENT_TOKEN_TO_BE_REPLACED

Epcot’s Japan has been evolving over the past few months! The Yakitori House has re-opened as Katsura Grill, featuring a broader menu and some more authentic Japanese dishes; Kabuki Cafe is open as a take-away kiosk offering not just Kaki Gori, but also Miso soup, sushi, edamame, and other goodies!

But another little spot opened in Japan with little to no fanfare — a new outdoor sake bar located at the base of the steps to Katsura Grill. While many folks will just walk right past this spot without necessarily noticing it, I urge you to stop by and try out a few of the items there. While I do enjoy the indoor sake bar in Mitsukoshi Department Store, this outdoor location offers a few more “introductory” sake drinks that I think you might enjoy!

Like I mentioned, this location could potentially fade into the background. With similar clean-lined architecture and neutral tones to the surrounding area, it’s easy to just walk right by. But this little spot offers a fun menu and an even more accessible stop on your tour to Drink Around the World! Plus, it’s a good introductory spot to try sake — a drink that is becoming END_OF_DOCUMENT_TOKEN_TO_BE_REPLACED